There are no lack of SUVs on the market and Nissan itself is well represented. From its diminutive Juke to its burly Armada, there is something for everyone — six lines of utility vehicles to choose from.

A Nissan Murano was a recent weekly driver, a five-passenger midsize crossover SUV. It is the car-based alternative to the rugged Nissan Xterra SUV and is situated between the compact Rogue and the larger Pathfinder in the Nissan pecking order.

A Murano SL FWD model was the specific model tested and the $2,260 technology package was added, bringing its final price to $40,095. That package brought in a power panoramic moonroof, intelligent (adaptive) cruise control, forward collision alert and forward emergency braking. The safety side of the package will give you enough of a taste of autonomous driving to help you understand where the industry is going. Furthermore, you can also turn off the nanny controls should you tire of the incessant warnings. 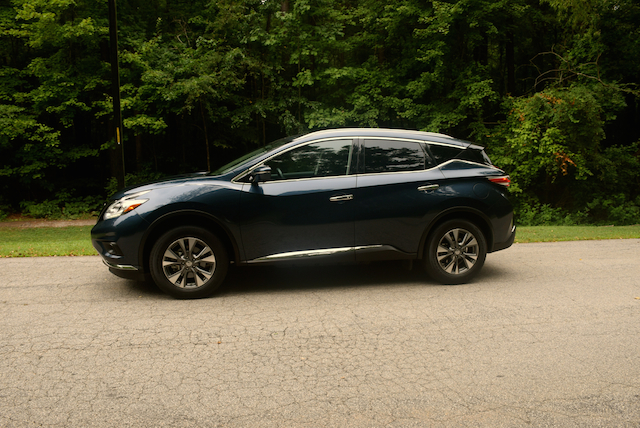 Murano: A Matter of Style

Polarizing describes the styling of not a few Nissan vehicles, with the Juke and the now-retired Cube amplifying that design boldness. The Murano also disjoins itself from the expected styling convention, delivering a visage that is at once sporty and controversial.

But there is an intrinsic allurement in the Murano that shouldn’t easily be dismissed. This model introduced a new design direction for Nissan’s larger models, what is also now evident in the 2016 Maxima.

What you have is a strikingly pronounced front fascia marked by an upswept grille will an oversized U-shaped bar. The sleek headlamps are accented by wing-shaped LED daytime running lights that emphasize a vehicle that appears to always be in motion. Arched lines dominate the sporty lower grille opening. Distinctive fog lights are found near the lower grille opening as well.

Chiseled lines on the hood, along the profile and to the rear hatchback advance the Murano’s distinctive look. Curvilinear lines run from the hood to the rear deck and also from wheelbase to wheelbase at the rocker panels. The look of the former shapes the window outlines, the latter mien accents the Murano’s muscular demeanor.

To the rear are wing-shaped tail and LED lights that flow from the hatch to the profile. A rear spoiler, rear fog lights and oversized exhaust finishers complete the appearance. Some may find the Murano’s countenance appealing while others may be entirely put off by the contentious expression. The instrument panel is marked by a pair of analog displays, tachometer and speedometer, surrounding a digital driver’s information center. Steering wheel-mounted climate and auxiliary controls are found on the leather-wrapped wheel.

An 8-inch color display dominates the center stack, offering a gateway to the NissanDirect telematics system for climate, media and navigation controls. Voice, touchscreen access as well as nearby switches and knobs control these systems. Additional switches and knobs underneath as well as USB ports, a 12-volt outlet and an auxiliary audio port are also present. Between the seats is the transmission shifter, two cup holders and a covered compartment that can house your smartphone. A luxuriant, padded storage compartment between the seats, indoor pockets and a deep glove box are among the storage compartments present. This model also came with a panoramic automatic sliding moonroof, a tilt and telescopic steering column, stainless steel kick plates, and eight cargo area tie-down hooks and rings are also present.

Speaking of the cargo area, it is huge and much more so with the rear seat folded. For a vacationing family, there is ample room behind the second-row seat. For people seeking yard sale finds, the area is cavernous. That sideboard you have in mind just may fit with a little maneuvering on your part.

The Nissan Murano offers satisfactory off the line acceleration and ample passing power. It is the same engine found in the Maxima, but it is tuned to 260 horsepower versus 300 for the 2016 Maxima. Nevertheless, there was no stress with this crossover and the CVT performed as well in the Murano as it did in the Maxima.

Handling equals that of other models in this segment — nothing exciting, but a curious lack of torque steer considering that the test model was front-wheel drive, not the available all-wheel drive. Braking is firm and far from the mushy feeling you may experience with some ponderous SUVs. On the safety side of matters the 2015 Nissan Murano garnered a Top Safety Pick+ rating from the trustworthy Insurance Institute for Highway Safety (IIHS). The IIHS gave the Murano its highest scores in small overlap front, moderate overlap front, side, roof strength, and head restraints & seat tests. The Murano also scored “superior” in front crash testing with its available equipment.

Besides the usual suite of airbags, traction control, stability control, brake assist and electronic brake-force distribution, the Murano offers such safety features as blind sport warning, forward collision alert, adaptive cruise control, moving object detection, a 180-degree rearview camera, and other features. Together, these safety features make the Murano one of the best in its class. The Nissan Murano provides the styling flair, comfort, upscale accouterments, and the safety factors that many people prize. A nicely loaded model can be had for about $35,000, putting it in competition with the Ford Edge, Hyundai Santa Fe Sport, and the Jeep Cherokee. The Nissan SUV lineup is a strong one with the Juke, Rogue, Xterra, Pathfinder, and Armada also available.

To sum up, the Nissan Murano delivers much of what a small family or empty nesters may want. It is a versatile vehicle and with its limited towing capacity (1,500 pounds) it can pull a skiff as well.