Since launching the Hyundai Genesis here in America last year, the South Korean automaker has reported decent interest in both the luxury sedan and sport coupe that share the Genesis name. Sales are good and the awards from members of the automotive press have been positive if not downright giddy. 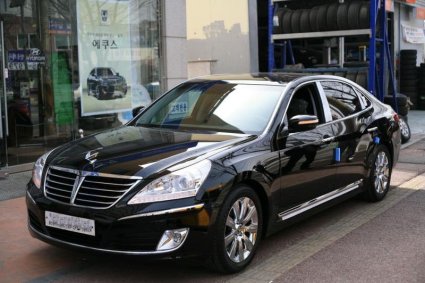 Hyundai may soon be doing an encore to the Genesis in the form of its flagship Equus sedan, a car that is bigger, longer and heavier than the Genesis, a true BMW 7 Series fighter. News reports are indicating that one hundred copies of the Equus will soon arrive in the US, with plans to tour Hyundai’s dealer network and measure public reaction.

The Equus line has been in use for some time and is all new for 2010. In Korea, the Genesis and Equus represent the top of the line Hyundai models which also include tiny little cars such as the i10 which aren’t sold stateside. However, there is some concern that the Equus along with the Genesis should carry another brand name much as Toyota did when it separated its luxury cars from everything else to create Lexus.  The rest is history.

People attending the New York International Auto Show this past April got a glimpse of the Equus, as Hyundai decided to put the big sedan on display there. Powered by a 4.6L V8, the Equus is positioned to battle the Mercedes S-Class, Lexus LS and the BMW 7 Series.

Other than the  Wikipedia file photo, not a whole lot else is known about the Equus, given that it has been newly released in South Korea and is scheduled to go on sale next month in China. Hopefully, I’ll be one of the lucky ones to obtain an Equus test drive this summer. If I do, you’ll certainly hear about it here!

1 thought on “Is The Hyundai Equus U.S. Bound?”