The 2013 Cadillac XTS will be available in front- and all-wheel-drive when it goes on sale this spring. The new model replaces both the DTS and STS, which were retired last year. This fall, several months after the XTS becomes available, a Driver Assistance Package will be introduced. GM says that this package will be the first of its kind to employ sensor fusion, technology that enables integration of a broad range of sensing and positioning technologies that can alert drivers of road hazards and help them avoid crashes.

Specifically, the system’s use of radar, cameras and ultrasonic sensors enables advanced safety features, including:

“A system that combines the strengths of multiple sensing technologies and expertly manages those inputs can provide advisory, warning, and control interventions to help drivers avoid collisions and save lives,” Litkouhi said.

Importantly, sensor fusion demonstrates a direction GM has been traveling for some time, at least in vehicle testing. Specifically, the automaker says that this technology represents a building block in the development of semi-autonomous and fully autonomous vehicles, which are designed to maintain lane position and adapt to traffic environments. Although it doesn’t fully integrate the technology, it could prove to be a gateway to semi and fully autonomous driving that is expected to be introduced by the end of this decade.

The only drawback right now is that skyscrapers can interfere with GPS technology, as tall buildings can interrupt signals in certain urban locations. However, GPS combined with multiple sensors and linking technologies between vehicles and perhaps fixed on top of light poles on city streets, might eliminate these gaps.

For customers interested in the XTS and the new technology, they’ll want to put off their purchase until this fall. When the XTS does arrive this spring, it’ll be loaded with technologies including Cadillac CUE, but its sensor fusion safety technologies wont arrive until after this five-passenger sedan makes its debut.

Finally, Volkswagen introduces a Golf model that offers better performance than the GTI. We say finally because for the last three years rumors of the Golf R’s arrival on North American shores have surfaced several times only to disappear beneath a wave of denials.

Well, the all-wheel-drive Volkswagen Golf R is here and the what this car offers is the fastest Golf model ever. This model offers a wider look than the GTI with its three air intakes, its aero side sills and its rear dual center exhaust. The Golf R comes with LED daytime running lights, Bi-Xenon headlights with advanced front-lighting system — shifting up to 15 degrees when operating, enabling you to see around corners better — and 18-inch alloy wheels. 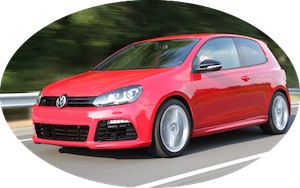 But we all know that it the Golf R’s performance cred that draws everyone to this model that starts at $33,990 for the two-door and $36,090 with the four-door. Those two extra doors also include a sunroof and navigation, but as you might imagine you’re still paying a lot of money for a subcompact street hummer.

Under the hood is where all of the action is. That’s because Volkswagen uses a 2.0-liter turbocharged engine that produces 256 horsepower at 6,000 rpm and 243 foot-pounds of torque at 2,400 rpm. Paired with a 6-speed manual transmission, this engine takes premium grade gasoline for optimum performance and is EPA rated at 19 mpg city, 27 mpg highway.

Motor Trend says that the Golf R should go from 0 to 60 mph in 5.6 seconds. With the dual clutch gearbox you can see 5.3 seconds, but that transmission is not available on the left side of the pond. Yes, enthusiasts are bummed that the DSG isn’t an available, something that may cost Volkswagen a few sales. The Mitsubishi Lancer EVO and Subaru Impreza WRX are two models competing with the Golf R, priced slightly higher, but in the case of the WRX offers a faster ride.

You get five color choices to choose from including Deep Black Pearl Metallic, Candy White, Carbon Steel Gray Metallic, Rising Blue Metallic and Tornado Red. Not sure if “Candy White” is a name that will appeal to too many buyers.