Mercedes-Benz builds cars of every size and covering nearly every class of vehicle. In the United States, the smallest model we see is the C-Class, the entry point by which most up and coming buyers enter the luxury segment. In Europe, Mercedes-Benz is also very much active in the smallest segments, selling A-Class and B-Class models, representing subcompact and compact vehicles that are not sold in North America. The thinking for many years is that American drivers would resist such vehicles, models that would ultimately diminish the M-B name.

Mercedes has resisted sending its smallest models across the Atlantic Ocean, but that will soon change when both its A-Class and its B-Class lines are shipped stateside. At the 2012 Geneva International Motor Show in Switzerland this month, Mercedes took the veil off of its next generation A-Class, giving the world a look at a vehicle that will ultimately find its way to the American highway. 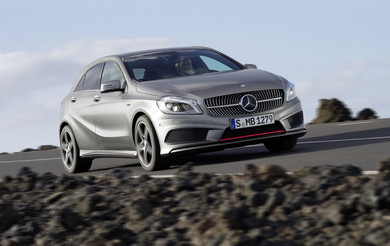 The face of the subcompact Mercedes-Benz A-Class.

Dr. Dieter Zetsche, Chairman of the Board of Management of Daimler AG and Head of Mercedes-Benz Cars, said the following as the A-Class was introduced, “A is for Attack: the A-Class is a clear statement of the new dynamism of the Mercedes-Benz brand. It is completely new, down to the last detail. In automotive development, it’s not often you get the chance to start with a clean sheet of paper. Our engineers and designers have made the very most of that opportunity.”

That clean start is needed if the A-Class is to succeed in the U.S. Featuring a distinct Mercedes face helps to advance this vehicle’s design language, but as Rick Kranz of Automotive News noted, it is the size of Ford Fiesta. That makes for a small luxury car and no matter how you slice it, a different ride than what you’ll find in the typical M-B product. Mercedes won’t be introducing its 5-door hatchback to the U.S. market until 2014 and has pegged sales at about 15,000 units per year.

In Europe, the next generation A-Class will be sold as three- and five-door hatchbacks, as a wagon and will also include a crossover-like model. Only the 5-door hatchback is planned for the U.S. although one can see room for the crossover model down the line.

Notably, M-B has been pushing safety with this model. Its “democratization of safety” mantra means that its smallest cars comes equipped with the same features found in its largest and most expensive models. These features include attention assist, brake hold, hill-start assist, adaptive highbeam assist, blind spot assist and lane keep assist, speed limit assist, active parking assist and a reversing camera. M-B is all about assisting drivers in a variety of road conditions…right?!

Under the hood, 1.6-liter and 2.0-liter gasoline engines are offered and are paired with a six-speed manual transmission or the optional 7G-DCT dual-clutch automatic transmission. Several diesel engines including a 2.2-liter turbodiesel will also be offered. It remains to be seen what engine choices will make it stateside.

As the photos reveal, the interior of the A-Class is refined and beats out any subcompact model that is now available in the U.S. M-B defines that interior as “pure sportiness, newly interpreted,” which means that this model makes good use of limited space to offer a special look. Or at least that is what M-B contends. Specifically, the automaker describes the car’s air vents as “sparkling jewels” to illustrate the cabin’s quality level. Notably, the trim elements have been outfitted with an electroplated finish, resulting in what M-B says are “real metal surfaces with “cool touch” effect.” As the photos of the instrument panel show, much attention was given to make this part of the cabin stand out.

Given that this model is about two years away from shipping to North America, there is not much we can say about how the A-Class will be outfitted when it arrives in Mercedes showrooms. That will give M-B heads plenty of time to gauge customer reaction perhaps by showcasing a U.S.-spec model as early as next month at the New York International Auto Show or maybe this November at the Los Angeles Auto Show. In any case, M-B has a new A-Class for the European market with plenty of time to ready this car for the North American market.