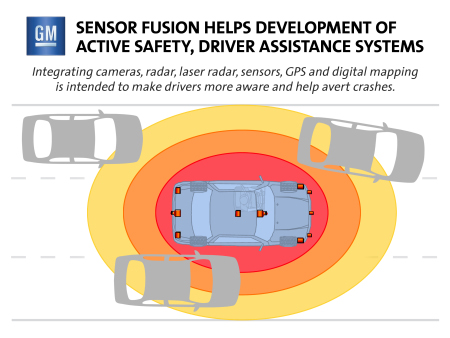 The 2013 Cadillac XTS will be available in front- and all-wheel-drive when it goes on sale this spring. The new model replaces both the DTS and STS, which were retired last year. This fall, several months after the XTS becomes available, a Driver Assistance Package will be introduced. GM says that this package will be the first of its kind to employ sensor fusion, technology that enables integration of a broad range of sensing and positioning technologies that can alert drivers of road hazards and help them avoid crashes.

Specifically, the system’s use of radar, cameras and ultrasonic sensors enables advanced safety features, including:

“A system that combines the strengths of multiple sensing technologies and expertly manages those inputs can provide advisory, warning, and control interventions to help drivers avoid collisions and save lives,” Litkouhi said.

Importantly, sensor fusion demonstrates a direction GM has been traveling for some time, at least in vehicle testing. Specifically, the automaker says that this technology represents a building block in the development of semi-autonomous and fully autonomous vehicles, which are designed to maintain lane position and adapt to traffic environments. Although it doesn’t fully integrate the technology, it could prove to be a gateway to semi and fully autonomous driving that is expected to be introduced by the end of this decade.

The only drawback right now is that skyscrapers can interfere with GPS technology, as tall buildings can interrupt signals in certain urban locations. However, GPS combined with multiple sensors and linking technologies between vehicles and perhaps fixed on top of light poles on city streets, might eliminate these gaps.

For customers interested in the XTS and the new technology, they’ll want to put off their purchase until this fall. When the XTS does arrive this spring, it’ll be loaded with technologies including Cadillac CUE, but its sensor fusion safety technologies wont arrive until after this five-passenger sedan makes its debut.