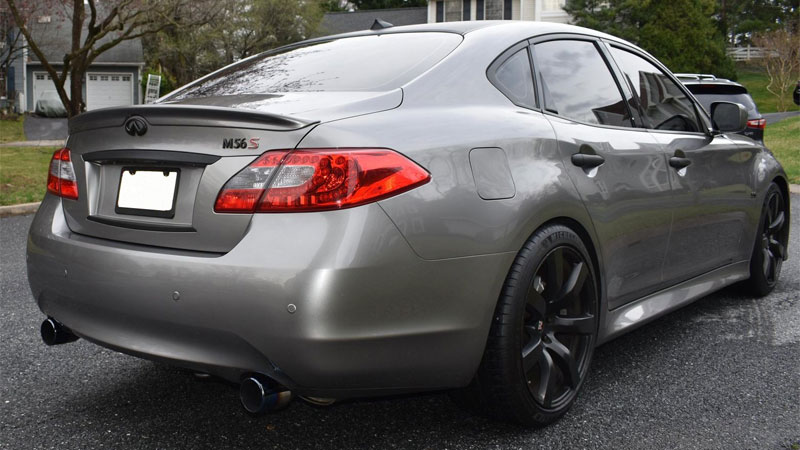 There are two things of note about the 2013 Infiniti M Line that have little to do with the sedan itself.

First, the M56S designation signals that this model is the ultimate vehicle in the Infiniti pack. The “S” stands for sport, a model that employs special tuning that sets it apart. Second, the M Line itself is on its last legs (or wheels). Come the 2014 model year, both the M37 and M56 will shared the Infiniti Q70 model name.

You are to be forgiven if you think that the Infiniti M Line is in any way related to the Nissan Maxima. The M comes in about four inches longer, but the architecture is completely different. The Maxima rides on a front-wheel drive platform, the M Line is RWD. The engines are different too with the Maxima getting a 3.5-liter V-6.

Some competing brands offer little distinction between standard and luxury models most notably the Lincoln MKZ and Ford Fusion sharing platforms, engines, transmissions and nearly everything else except sheet metal and some interior differences.

Inside, the M’s cabin is bright and offers adequate room for four passengers or for five in a pinch. The rear center seating compartment has three places for sitting, but the pronounced drivetrain hump makes that middle position uncomfortable for adult passengers on long trips.

No, I did not sit there while someone else drove around — years of experience riding in that position has confirmed that for me. But, it is a worthwhile tradeoff when you get the benefits of rear-wheel drive and a big engine.

The instrument gauge features analog oval tachometer and speedometer displays that flank a digital driver information center read out. The expected auxiliary control switches for navigation, climate control and audio are located on the steering wheel.

The center stack is dominated by an eight-inch color touchscreen display with a quartz clock and the audio system and climate controls underneath. Unlike some systems, you can access the Infiniti’s infotainment system by touch or by using buttons and dials located beneath it.

Cabin amenities aside, a vehicle of the M56S’ stature must be put through the paces to be enjoyed. Those paces are best realized by adjusting the driving mode accordingly. Besides the standard mode, you can select eco, snow and sport modes, the latter for spirited driving.

Choose the sport mode and the engine throttle and transmission shift points adjust accordingly. Make no mistake about it: you’ll want to operate the transmission in shift mode to best enjoy its performance capabilities. Automatic shifting is okay, but there is some hesitancy and at times jerking when you floor the gas pedal.

Still, the power underneath the M56S’s hood should satisfy most driving enthusiasts. Marry that to its four-wheel active steering system and sport-tuned suspension and you’ll hug those twisty curves with ease.

Moreover, you’ll keep the nanny lane departure warning reminders from chiming. Ignore that feature and lane departure prevention will gently apply the brakes to remind you to stay on course.

Yes, you can silence the reminders by holding down a button for a few seconds to send the nanny packing. Rely on your gut, the sedan’s steering prowess and its responsive brakes and you’ll always feel in control of this capable luxury sedan.

Infiniti, the brand, however, has to do more to attract and retain a loyal following. Through June 2013, sales were down by 3.9 percent in an expanding market. Infiniti trails all three German competitors, its two Japanese rivals and is also well behind Cadillac, but ahead of Lincoln.

One factor hold the brand back could be its pricing as this fully equipped model came in at just above $70,000, which may explain in part why M Line sales are down by more than 40 percent this year.

The market is tough and unforgiving, and dominated by the Mercedes E-Class with the Cadillac CTS, BMW 5-Series and Audi A6 offering intense competition for the Infiniti M56S as well.

See Also – On the Road With the Roomy, Stylish Infiniti JX35