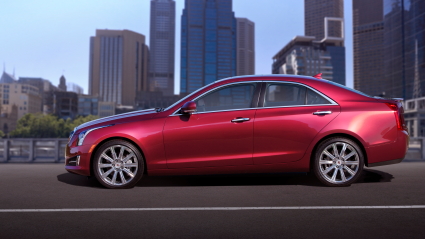 GM has made much progress in recent years to elevate its Cadillac brand back into luxury segment relevancy. Those changes began to kick in as far back as 2007 when the second-generation CTS made its debut. That sedan was followed by wagon and coupe body styles, a new SRX crossover and, most recently, the ATS sedan.

The Cadillac ATS is a shining star for the brand, much in the same way that the CTS has always been. Last November, Auto Trends reported that the compact luxury sedans conquest rate was 70 percent, meaning seven out of 10 ATS buyers were new to Cadillac.

At the beginning of this month as GM released its Jan. 2013 US sales data, we learned that Cadillac ATS sales rose by 47 percent over December. Moreover, in January Cadillac had its best retail sales month in 23 years. GM also estimates that Cadillac market share increased by 3 points, for the largest increase of any luxury make.

Key for Cadillac is that it is relying much less on fleet sales and much more on customer sales. Fleet sales can push up the volume while also pushing down profits. Some 94 percent of Cadillacs sold last month went to individuals, just the sort of change GM has been striving to achieve for years.

Also selling well for Cadillac is its SRX crossover, a second-generation model that was refreshed and gained technological updates for the 2013 model year. This small crossover has been a delightful surprise for Cadillac, in a segment that continues to grow by leaps and bounds. Indeed, that is the reason why Lincoln fielded the MKC Concept this year: Ford wants in on the fastest-growing luxury vehicle segment.

Two new models are slated to be released later this year and early next year. The third-generation CTS will arrive in the fall, a sedan. When pressed recently by this writer to reveal what plans that the brand has for the CTS line, a Cadillac spokesman was expectantly tight-lipped. However, Auto Trends believes that the Cadillac CTS will lose either its coupe or wagon body styles, with the ATS gaining at least one of these models in subsequent years.

The second model to be released this year will be the Cadillac ELR, a spectacular looking plug-in hybrid electric coupe that may prove to be the surprise halo product for the Cadillac brand. GM may only sell a few thousand copies annually, but then that alone may be enough.

With Cadillac selling more cars and therefore proving more profitable, GM is proving that its over-reliance on full-size pickup trucks will continue to shrink. Cadillac is adding new models and with an updated Escalade and a larger crossover in the works, GM will have Cadillac better positioned to take on Mercedes-Benz, Lexus, BMW and Audi, brands that will pose the biggest challenge for it through the remainder of this decade.

1 thought on “Cadillac ATS at the Heart of Brand Revival”