Chrysler’s rear-wheel drive architecture has set it apart from its domestic competitors with its large Dodge and Chrysler sedans underpinned by this platform layout. Chevrolet’s lone entry is its Australian-supplied SS while Ford relies on front-wheel drive and optional all-wheel drive for its Taurus sedan. 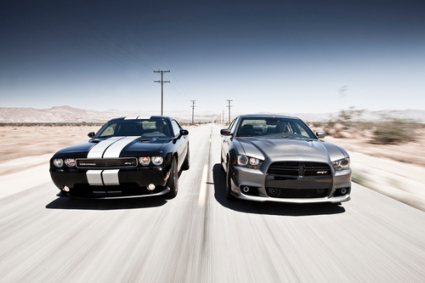 Future Chrysler products will continue to offer rear-wheel drive, something that sources had told Auto Trends recently and what Automotive News [subscription req’d] confirmed on Monday. Fiat and Chrysler are currently working on a next generation platform that will underpin select Alfa Romeo, Chrysler and Dodge products beginning with 2016 model year vehicles, with optional all-wheel drive expected.

The joint effort comes as Fiat desires to take on the German luxury triumvirate — Audi, BMW and Mercedes-Benz — with higher volume models. The platform being developed may target two distinct segments, notably with BMW’s 5- and 7-Series in the crosshairs. The Alfa Romeo products would eventually find their way to the US and would also be marketed in China and other markets.

For Chrysler, the new rear-wheel drive platform would underpin the next generation Chrysler 300 and Dodge Charger sedans as well as the Dodge Challenger coupe. All-wheel drive variants of the sedans would also be made available. An AWD Challenger might be intriguing, but it is unlikely.

The Dodge Challenger had been rumored to be on its way out, replaced by the SRT Cuda, something that Car and Driver pointed out in its October 2012 issue. Auto Trends, however, believes that this won’t be the Chrysler Group’s approach. Instead, the Dodge Challenger will survive and if a ‘Cuda model does debut it will be wear Chrysler badging, not SRT. For now, the Viper will remain SRT’s lone model with the street & racing technology brand also tasked with developing SRT sub-models for the other Chrysler brands.

The Chrysler Group is also looking to differentiate its brands further by separating like products such as the Chrysler 200 and the Dodge Avenger. The Chrysler 200 name will survive and that vehicle will most likely debut in early 2014, underpinned by a modified Lancia platform.

The Dodge Avenger may solider on for another model year before it is killed off and replaced by a new model, a crossover, that would also replace the Dodge Journey. Unconfirmed and certainly of speculative nature is that the Avenger’s replacement would be rear-wheel drive, perhaps a chopped version of the new rear-wheel drive platform. That would give Dodge three rear-wheel drive models, delighting enthusiasts, but we believe that costs and the model’s now unusual layout (i.e., RWD non-luxury midsize sedan) would preclude that from happening. Then again, it might be the approach for Alfa Romeo to take.

Looming large for Chrysler and other manufacturers are the increasingly stringent federal fuel economy averages that will require automakers to offer fleets averaging 54.5 miles per gallon by 2025. Chrysler’s fleet is one of the heaviest in the industry and scaling down won’t come easy with RWD vehicles in the line up. What Chrysler will do is make greater use of Fiat-supplied TigerShark four cylinder engines in some models, perhaps a turbo version of the same in its large sedans. Those models would also get the 3.2-liter Pentastar V-6 with a supercharged version of the same arriving a few years later and possibly replacing any remaining V-8 engines.

Auto Trends seems further industry consolidation over the next few years with alliances, not outright mergers, driving the industry. With Mazda supplying a Miata-derived sports car for Fiat, we’re fairly confident that this relationship will expand despite Mazda’s working relationships with Toyota and Nissan. Mazda is simply too small to continue on its on and might prove a nice addition to Sergio Marchionne’s portfolio.

See Also — Head over to Central Contracts to explore your Chrysler leasing options.