The 2015 Lincoln MKC was introduced to reporters in New York on Wed., a compact crossover sport utility vehicle that goes on sale in summer 2014. The 2015 Lincoln MKC, to be made available in front- and all-wheel drive configurations, will be powered by EcoBoost engines exclusively including an all-new 2.3-liter four cylinder motor. The Lincoln MKC follows the MKZ as the second of four new vehicles coming to the Lincoln line by 2016. 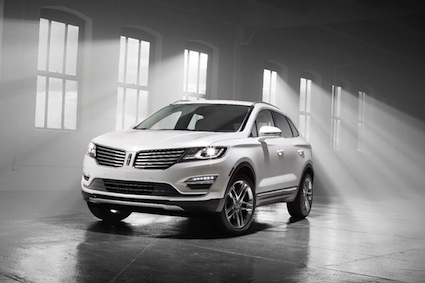 The Lincoln MKC will occupy the compact premium SUV range, one of the fastest growing segments on the market. Its chief competitors will include the Porsche Macan, Acura RDX, BMW X3, Mercedes-Benz GLK and the Audi Q5. It is smaller than the Cadillac SRX, thus GM’s luxury brand is expected to roll out its own MKC competitor in the near future.

With the compact premium segment growing by more than 200 percent since 2009, the MKC’s arrival comes not a minute too soon. Lincoln dealers have been struggling these past few years since Mercury was canceled, having been left with a limited number of models to sell. Lincoln sales surged by 38.4 percent in Oct. 2013, but are still down by 3 percent for the year.

As recently as 1998, Lincoln was the best selling luxury brand in America. This year it will sell approximately 80,000 units, or about one-third the number that BMW, Mercedes-Benz, and Lexus each sell annually. Lincoln trails Acura, Cadillac and Infiniti as well.

The MKC’s introduction comes 10 months after the concept was introduced at the 2013 North American International Auto Show in Detroit. Along with the MKZ sedan, the MKC will target younger buyers with Lincoln expecting strong interest from consumers on both coasts. 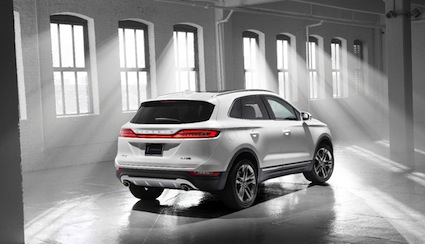 The Lincoln MKC sits on the same platform that underpins the Ford Escape. Unlike other Lincoln models that are essentially upscale versions of Ford products, the MKC comes in lower and wider than the Escape with different seating positions.

Followers of the Lincoln MKC concept will be pleased to see that the wraparound rear liftgate remains. Said Max Wolff, director, Lincoln Design, “The execution of the new liftgate is a prime example of how a premium design element can create a better customer experience.” That design includes a sculpted body, a high beltline, and athletic shoulders.

Inside, the MKC features plush leather with French stitching, available Bridge of Weir leather and real wood trim. An all-new steering wheel will also debut, wrapped in leather and offers what Lincoln says is “better feeling and control” for drivers. The MKC also features a push button gear-shifting system, exclusive to the Lincoln line.

The new model is also outfitted with an enhanced THX® II Certified Audio System, what Lincoln describes as an industry-first featuring THX-distributed bass technology and 14 right-, center- and left-slot speaker assemblies. The optional, leading edge audio system provides what Lincoln says is “…a rich, immersive surround sound experience that reproduces music as it was mixed in the studio.” 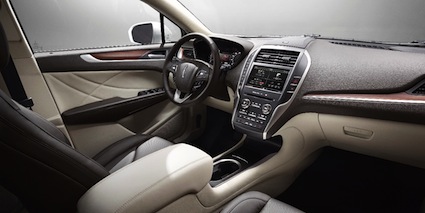 One problem that has dogged Ford and Lincoln models for the past few years is its infotainment system. Known as MyFord Touch and MyLincoln Touch respectively, the system has been criticized by Consumer Reports and others for its complexity.

The Lincoln MKC is outfitted with MyLincoln Touch, but volume and tuning knobs, not included with the MKZ, are part of the new package. Both brands have taken quality hits over the technology with the Ford Motor Company responding by making these systems easier to use. Voice activation and touchscreen access will still be possible, but having the traditional knobs and switches available will come in handy.

Lincoln will outfit the five passenger MKC with numerous safety features including collision warning with brake support, lane keep assist and driver assist. Visual and audible alerts will aid the driver; automatic braking will kick in when driver response lags.

The MKC will also offer a blind spot information system including cross traffic alert. This model will be equipped with seven standard airbags including a driver’s knee airbag, exclusive to its class.

With a new model on the horizon, Lincoln continues on a slow, but steady path to repair its image and boost sales. The MKC will be sold in North America and China exclusively, the latter a new market for Ford’s premium brand. Pricing and other model details will be made available closer to the MKC’s introduction.

Is the Lincoln Black Label Dressed for Success?

Lincoln Brands Heads to China in 2014

0 156
Made Across America at the Washington Auto Show