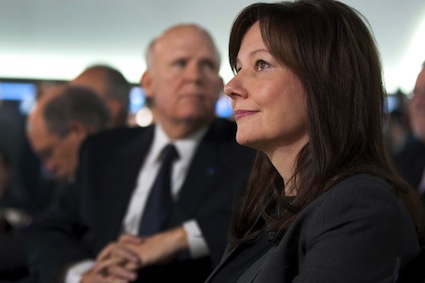 There may not be another car manufacturer in the world that can match GM’s flair for the dramatic. Back before the company went bankrupt, there were occasions when the automaker hired a marching band, brought in vintage models and augmented iron with celebrities to introduce a new or concept vehicle. GM’s debuts are less theatrical these days, but its inclination for building buzz remains, demonstrating a much more nuanced and disciplined approach instead.

This week, the federal government officially sold its remaining shares in General Motors, ending nearly five years of federal oversight of the company. No longer can the words “Government Motors” be honestly ascribed to GM, an appellation that management has been forced to acknowledge, but also desperately has wanted to see removed.

That removal came on Monday as the U.S. Department of the Treasury announced that it had sold its remaining share of GM’s common stock. No, the entire taxpayer investment has not been recouped. Yes, there is strong proof that rescuing GM had an overall positive impact on the economy as outlined by the Center for Automotive Research in its study published this week.

And if on cue, GM followed up the Treasury Department’s announcement with one of its own, revealing that its current CEO Dan Akerson would step down in Jan. 2014 and be replaced by Mary Barra.

That news spread like wildfire, with “Mary Barra” quickly trending on Twitter and staying there for much of the day. It also confirmed that Dan Akerson’s earlier pronouncements that Barra was a GM CEO candidate went beyond mentioning a woman’s name in a sea of men. Barra was elected by GM’s Board of Directors to become the next CEO of the company, a position that she will assume on Jan. 15, 2014. She will also join GM’s Board.

Akerson was expected to leave GM by next summer, but moved up his succession plan so that he can spend time with his wife who was diagnosed recently with an advanced stage of cancer. Akerson led the company to record profits and has it competing with Toyota and Volkswagen for global sales leadership.

With Mary Barra moving up, GM has also moved several other executives around. Theodore (Tim) Solso will succeed Akerson as Chairman. Dan Ammann, currently executive vice president and chief financial officer, will become president, tasked with managing GM’s many regional operations as well as overseeing the Chevrolet and Cadillac brands in addition to GM Financial.

Alan Batey, currently senior vice president, Global Chevrolet and US. Sales and Marketing, will move into Reuss’ slot. He also has been named Executive Vice President and President, North America.

Steve Girsky, vice chairman, Corporate Strategy, Business Development and Global Product Planning, will move to a senior advisor role, then leave the company in April 2014. Girsky will remain on GM’s Board of Directors.

Mary Barra: Who is She?

Mary Barra, 51, has been GM for 33 years, rising through the ranks in various departments including manufacturing, engineering and senior staff positions. Barra’s leadership in turning around GM has been recognized within and without the company, as she has helped to breathe fresh life into the company’s product development process. Barra has also led the effort to improve product quality ratings and customer satisfaction.

Barra began her tenure with GM while in college, working as a co-op student for Pontiac while attending Kettering University (formerly the General Motors Institute). She graduated with a degree in Electrical Engineering, later earning an MBA from Stanford.

Before her latest appointment, Mary Barra had already attained the highest role a woman has ever reached in the auto industry. In 2013, Forbes rated Barra No. 35 on their list of the World’s Most Powerful Women, rising six spots from 2012. Come 2014, her ascendancy to CEO of GM will fuel her rise further, perhaps putting her among the Top 10 women of the world.