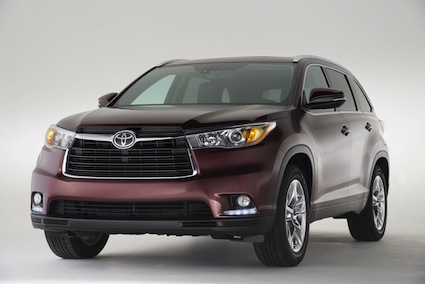 The third generation Toyota Highlander has made its debut, taking a bow at the 2013 New York International Auto Show. The 2014 model receives a new exterior design and offers an upgraded, premium interior with technological and safety updates. This midsize crossover sport utility vehicle seats up to eight and features standard front-wheel-drive or optional all-wheel-drive. The new model goes on sale in early 2014.

Three powertrain choices are available including a 2.7-liter four cylinder engine that is standard with FWD models. Optionally, a 3.5-liter V-6 engine is standard with AWD models. Both engines are paired with a six-speed electronic controlled transmission.

Toyota is the worlds leader in hybrids and the Highlander Hybrid represents the third powertrain arrangement. The V-6 engine, an electric motor and a continuously variable transmission are present with this all-wheel-drive model. The current model gets an even 28 mpg around the city and 28 mpg on the highway according to the U.S. Department of Energy no word yet whether well see the 30 mpg cracked with the latest edition.

Toyota is placing emphasis on interior refinement for the new Highlander, a vehicle that competes in a segment that includes the Mazda CX-9, Nissan Pathfinder, Chevrolet Traverse, Dodge Durango and Ford Flex to name a few. Those refinements include a soft touch instrument panel, standard seat stitching and brightwork embellishments.

The new Highlander also features a wood-grain pattern trim across the front dash and door trim. Perforated leather-trim seats are optional, an upgrade from the standard premium cloth seats offered. Leather touches can also be found on the shift knob and around the steering wheel. Knit roof lining and available second row sunshades bring further refinement to the cabin.

Toyota squeezes out an eighth seating position by placing a bench seat in the second row position. The third row offers a split folding seat that also seats three. Buyers, however, may choose to lose the bench seat by replacing it with a pair of optional captains chairs that also come with a collapsible tray with cupholders. In any case Toyota says that much of the interior layout improvements provide more room for third-row passengers and also yields a 34 percent increase in standard storage capacity.

Standard across the Toyota Highlander line is the brands Entune™ multimedia system. It represents a display audio system with a 6.1-inch touchscreen; Bluetooth connectivity and voice recognition are included. Optionally, shoppers can choose an eight-inch touchscreen system, while Toyota’s Entune™ app suite with12 JBL speakers can also be had.

Rear seating passengers can get connected too via an available entertainment system. This rear seating system offers an RCA coaxial input terminal located at the rear of the center console, what makes the connection of external devices, including gaming systems, possible.