Cost-cutting Volkswagen may allocate scant resources to keep the Phaeton. 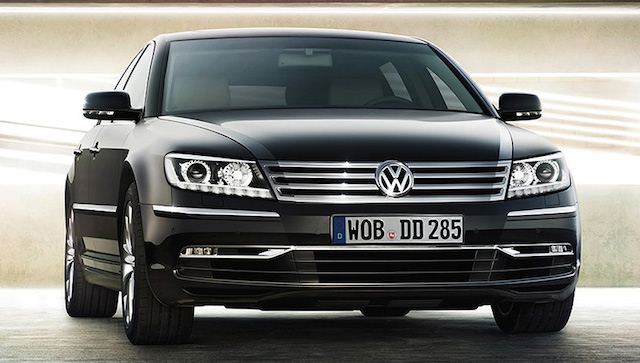 Volkswagen has plans to update this Phaeton luxury sedan.

Do you remember the Volkswagen Phaeton? If you are an American consumer, chances are that you are not familiar with VW’s over-the-top sedan. The Phaeton had a brief tenure in the US market, going on sale in 2003, then pulled just three years later.

The luxurious Phaeton never made it with American consumers who have always perceived Volkswagen as a mainstream brand. The sedan has all the makings of an Audi, but in Volkswagen attire. Guess which brand affluent consumers prefer?

Despite the Phaeton debacle, Volkswagen has a second-generation model in mind. A story published in Automotive News Europe this week stated that the German automotive manufacturer intends to build a new model, even though the original sedan has never matched its 20,000-unit annual sales target.

Volkswagen’s Phaeton plans come as the automaker consolidates platforms, shares more components between models and aims to displace Toyota as the top car manufacturer in the world by 2018. Indeed, Volkswagen appears to be three years ahead of its schedule as it should dethrone its Japanese competitor this year.

The Quest to Cut Costs

Notably, Volkswagen’s ascendancy will not come without much cost cutting, therefore analysts are perplexed why the company will allocate scant resources to build an exorbitantly-priced sedan. The current price of the Phaeton is approximately US$86,000 or nearly double the price of the next most expensive model, the Touareg SUV.

Furthermore, the eponymous Volkswagen brand has been languishing in the US market, even as far smaller competitors, such as Subaru, manage to outsell it. Volkswagen has two strong-selling models — Golf and Jetta — but it has been struggling to find sure footing in every other segment.

Devoting resources to a model that Autoblog says loses $32,000 per vehicle, while models such as the US-built Passat struggle to compete, seems illogical. Regardless, the Phaeton remains a pet project of VW Chairman Ferdinand Piech, who may use the Audi A8’s platform to construct a new model.

Volkswagen may have Mercedes-Benz S-Class owners in mind when designing the next generation Phaeton. Likely, both gasoline and plug-in hybrid variants will be offered, but the model’s ongoing existence will also put it up against the Audi A8.

If Volkswagen is attempting to rip a page out of the Hyundai playbook, then Piech hasn’t read the entire story. In models such as the Genesis and the Equus, Hyundai has taken aim at more expensive vehicles without reaching a stratospheric price point. Thus, while a Hyundai Genesis owner might also shop the BMW 5 Series, the sedan also attracts people who shop the comparatively priced Chrysler 300.

Phaeton detractors point to 5,812 units sold in 2013 as a strong reason for letting the sedan go. An estimated 6,300 should sell this year. Notably, IHS Automotive estimates that the new Phaeton would sell roughly 11,900 copies per year from 2017 to 2020, still well below original projections. Further, IHS says that “projects like the Phaeton send out the opposite signals” and by committing to this model” it will send out conflicting signals about the company’s intent to tackle the VW brand’s profitability crisis.”

With the luxury market booming worldwide, Volkswagen’s quest to gain a piece of that pie is understandable, if not foolhardy. Besides Audi, the Volkswagen Group owns other premium and luxury brands, including Bentley, Bugatti, Lamborghini, and Porsche. Instead, allocating resources to advance the Volkswagen brand stateside should be a priority, especially as the automaker wants to double US sales to 800,000 units by 2018. The Phaeton, in my opinion, should be laid to rest.
Volkswagen Phaeton photo procured from Wikipedia.