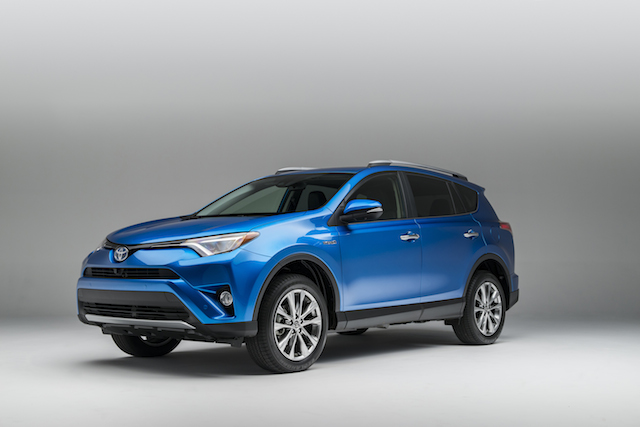 Even as some manufacturers struggle to field one or two hybrid (gas-electric) vehicles, Toyota continues to expand its offerings. At the 2015 New York International Auto Show on Thursday, Toyota took the wraps off of the 2016 Toyota RAV4 Hybrid, what represents the eighth hybrid model in its ever-expanding product line.

Toyota’s timing may seem off, especially as gas prices remain low and may stay down for the foreseeable future. Nevertheless, the automaker believes that its hybrid offerings provide customers with a solid choice. And judging by its market dominance, little argument will be made there.

The 2016 Toyota RAV4 Hybrid will enter the market this fall. Of the hybrid, Toyota says that it “will be targeted towards young adventure-seeking couples looking for a vehicle that provides utility, versatility, capability and excellent fuel efficiency.”

The hybrid system consists of a 2.5-liter gasoline four-cylinder engine, independent front and rear electric motors, and a continuously variable transmission. The rear motor has been designed to deliver additional torque to the rear wheels, but only when needed and in a bid to reduce wheel spin.

For 2016, the RAV4 Hybrid ushers in an updated design for the model line. Specific to this model include LED high and low beams as well as LED daytime running lights. Additional changes can be seen across the lower rocker panel and pushing back to the rear bumper. And at the rear is a new bumper, an enhanced lift gate and refreshed tail lights.

The RAV4 will also benefit from increased noise reducing materials added to the floor along with enhanced seals to make this the quietest edition yet. Also present is a larger, 7-inch color display, and available technologies to include Toyota Safety Sense and a new, Bird’s Eye Camera.

The Bird’s Eye View Monitor makes use of four cameras to provide the driver with a 360-degree view of the SUV. The cameras are mounted on the front, the side mirrors and on the rear of the vehicle, to provide a panoramic view of the surroundings. It can help drivers back into tight parking spaces and take note of obstacles, including children and small pets.

With eight hybrids in the mix, Toyota demonstrates once again its market leadership. The only vehicles not outfitted with hybrid technology are its largest utilities and pickup trucks, as well as its smallest vehicles. The former are not particularly suitable for the technology, while the smaller models are best represented through the Prius line.