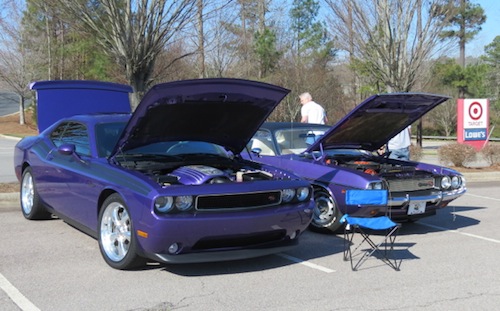 The marque named for the Dodge Brothers is celebrating its centennial, one of the few American automotive brands that have managed to reach that milestone. To mark the occasion, the spring version of the Charlotte Autofair is paying tribute to this Fiat Chrysler (FCA) brand, one that has outlasted Oldsmobile, Mercury and Plymouth, to name just a few.

Indeed, Dodge has survived many changes through the years, following its earlier absorption by Chrysler and the later separation of its Ram truck line from the brand. Dodge even lost its halo product, Viper, for a season to SRT, but has since won it back as part of an FCA transformation to make it a true performance brand.

The Charlotte Autofair opens today and runs through Sunday, a four-day extravaganza located at the Charlotte Motor Speedway in Concord, NC. To commemorate Dodge, the show’s organizers are featuring more than a dozen historic and iconic models in its Nationwide Showcase Pavilion.

Among those models are a 1923 Dodge/Graham truck, a 1951 Power Wagon, a 1996 Viper and perhaps one of the most recognizable models of all time — a 1969 “General Lee” Dodge Charger from the “Dukes of Hazzard” television series.

The Dodge brothers — John Francis (b. 1864) and Horace Elgin (b. 1868) — parlayed a sibling bond and rivalry to eventually build cars. The Dodges gained a flair for all things mechanical by working at their father’s machine shop, before going on to take a stake in a bicycle business.

From Oldsmobile to Ford

It was in 1902 when Ransom Eli Olds hired the brothers to work for his Oldsmobile company, founded five years earlier and later purchased by GM before the brand was retired in 2003. While with Olds, the brothers produced engines and transmissions for Oldsmobile, before leaving for the upstart Ford Motor Company. That move to a competitor required the brothers to eschew their own business endeavor and invest $75,000 in the Ford initiative in exchange for a 10 percent stake in the company. The gamble paid off as the Dodges soon became the wealthiest men in America.

A decade of working with Henry Ford gave the brothers the experience, wealth and confidence they needed to launch their own enterprise. And they did just that in 1914 when their contract with Ford expired. That venture gave the brothers the opportunity to apply certain improvements to their own vehicles ignored by Ford, opting for a higher-priced model and moving away from the “cheaper is better” philosophy initially embraced by Ford.

From Dodge to Chrysler

The first Dodge model cost $785 and was powered by a 35-horsepower, four-cylinder engine. That model was initially produced in Nov. 1914 and in its first full year of business, 1915, the Dodge brand quickly assumed the third spot in US sales.

Both brothers died in 1920 and eight years later their widows sold the enterprise to Walter Chrysler, profiting handsomely too. Since then, Dodge’s place in the market has grown, shrunk and has gone through multiple transformations, with newer models such as the compact Dart sedan joining the Viper super car, Challenger sports coupe and the Charger sports sedan.

The Dodge exhibit will not be the only thing happening at the Charlotte Autofair over the next few days. For one, the usual “car corral” will be in place, with hundreds of mostly classic cars ringing the oval for visitor inspection and purchase. Then there are the thousands of vendors scattered throughout the infield and beyond — sift through a pile of old license plates, find a rusty DeSoto Firedome bumper or haggle with a seller over a gear stick for that Javelin you are rebuilding.

The Charlotte AutoFair also feature cars from Ray Evernham’s “AmeriCarna” television show, a DeLorean “Back to the Future” display, a 2016 Shelby GT350R, and a personal vehicle display from NASCAR stars. AutoFair will also host 50 car club displays and Dealer Auctions Inc. will be on hand with as many as 200 cars up for auction.

And if cars are not your “be all and end all” there is something for everyone at the Charlotte Autofair. As always, the show will have a Play Zone for children, with the requisite bounce houses, face painting and other child-friendly games available.