Home » Mazda Has the Zoom-Zoom in its Product Line

We need to give the Mazda North American Operations team a lot of credit. Not too long ago Mazda’s position in the United States was tenuous at best, with some analysts, including this one openly wondering if the company would exit, stage right, ala Suzuki, Isuzu and Daihatsu.

Instead of retreating, Mazda is following in the footsteps or the smoothly paved road of another smaller Japanese competitor: Subaru. Unlike Toyota, Honda and Nissan, both of the lesser manufacturers have had to become innovative and creative in order to survive a tough market. Subaru has won people over with its mostly all-wheel drive product line and high quality, while Mazda operates in a variety of segments, always desiring to advance its zoom-zoom mantra wherever it goes. 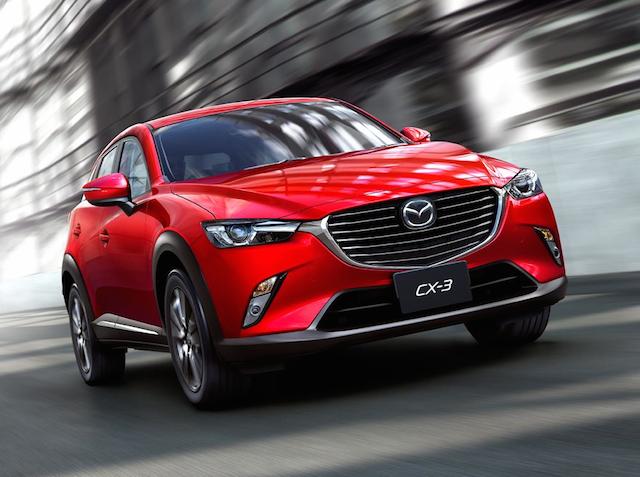 This CX-3 is one of two new models released by Mazda this year.

Because Mazda is so small — the company sells half as many vehicles as Ford builds F-Series pickup trucks in a year — the automaker has to work vigorously. Thus, getting one new model to the market in a given year takes much effort. And introducing two new models within a few months is simply astonishing.

But that is what Mazda has done with its Miata MX-5 sports car and its all-new CX-3 crossover. No, this writer has yet to drive either model, but the press coverage from my colleagues has been nothing short of overwhelmingly positive.

Toyota to the Rescue

For Mazda to survive in what is arguably the toughest automotive market in the world, it needs to show much ingenuity as well as pluck and determination. It also must maintain pressure on its existing product line, to ensure that its deep-pocketed competitors never get the upper hand.

However, one deep-pocketed competitor has chosen to look at Mazda more as an ally instead of as a threat.

Specifically, Toyota is working with Mazda to plug some of the inconsistencies in its own lineup. An example of this can be found in the Scion iA, a subcompact model based on the Mazda2. Mazda no longer directly sells its smallest model in the US, but in the body of the diminutive Scion it still does. That stipulation yielded an undisclosed amount of money for Mazda, funds it sorely needs and can use elsewhere in the Mazda cosmos. Mazda will also lend Toyota its expertise with all things SKYACTIV, specifically its fuel efficient engines and transmissions. About Toyota can you say, “cash cow?”

For its remaining product line, Mazda is not sitting still. Indeed, its best selling Mazda3 line will experience several updates for 2016, including the addition of rear view cameras and new sport and touring equipment packages. Those Sport and Touring packages will also find a way to the Mazda6, its beautiful midsize sedan. Look for new color screen options, LED lighting updates and a sport mode button, among other changes of note.

Where the Mazda CX-3 now competes with the smallest crossovers, including the Fiat 500X, the Jeep Renegade, Honda’s CR-V and the Nissan Juke among others, its compact CX-5 gains a larger and more powerful 2.5-liter four-cylinder engine. Moreover, this model receives a new cloth seat design, a standard rear view camera, and offers three new packages. For example, the GT technology package brings in LED lighting , radar cruise control, smart brake support with collision warning, lane departure warning and high beam control. You should know that not every package is available across the product line.

Just as Mazda has added two models it is also discontinuing one model, the Mazda5. That multi-purpose vehicle is essentially a minivan and operates in a segment that continues to shrink. At the same time, Mazda is looking at a replacement for its largest SUV, the CX-9. Indeed, the Koeru concept will bow at the Frankfurt Motor Show, pointing to a possible replacement model yet more proof that Mazda intends to remain competitive.