Auto sales continue to rise globally with the US market experiencing strong gains. The year-over-year streak may continue until 2018 when economic headwinds contribute to the first decline since 2009.

US auto sales are the strongest we have seen since before the last recession with domestic manufacturing plants operating at full capacity. Sales in September increased by more than 16 percent, translating to a selling rate topping 18 million units annually.

Ever since reaching bottom in 2009, the domestic market has been on a rebound. Indeed, Fiat Chrysler is currently enjoying a 68-month streak of year-over-year sales increases, Subaru is gaining market share at the expense of its rivals, and Audi continues to claim a larger slice of the luxury market and has a 57-month sales streak of its own.

The good news may continue for a while, but a pull back is coming. That’s the opinion of market research company IHS Automotive, whose forecast sees auto sales inching up over the next two calendar years before beginning to pull back over rising interest rates and other market factors. 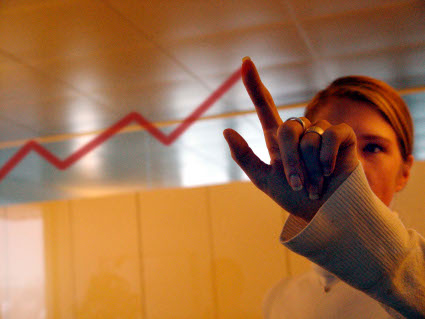 On Tuesday, IHS Automotive released a report, “Global Economic and Automotive Outlook,” offering a fall update of the global automotive market, including the status of the US automotive market. Presented by Charles Chesbrough, Senior Principal Economist — IHS Automotive, the report (opens to a .pdf) concluded that consumer buying desire remains high, while the strong labor market improves their ability to purchase a new car.

The favorable conditions currently at play also include stronger consumer confidence, consistent job creation, slight increases in wages, low gas prices, and the widespread availability of high tech products. Further, manufacturers are benefitting from a lower cost of materials and have been responding with numerous new products and updates. Credit availability is excellent and low loan interest rates are making purchasing a new car possible for a larger group of consumers.

The continued upswing of the auto industry has prompted IHS Automotive to adjust its earlier forecast. The research firm now sees US auto sales finishing at 17.3 million units this year, up from 16.5 million in 2014. Further, IHS estimates that the market will support 17.8 million units in 2016 and peak at 18.2 million units in 2017 before pulling back in 2018.

The Coming Blow Back

Headwinds are on the way and that translates into an industry downturn beginning in 2018. By then, tighter credit will begin to restrict consumer access to the market with auto sales drifting downward to 17 million units sold annually by 2022 reports Automotive News. Notably, the anticipated decline does not factor in the typical sales plunge that usually follows peak auto sales, with Chesbrough leaning toward a more modest pull back.

Chesbrough also noted the industry is in a much better position these days with production capacity and demand ideally aligned. In addition, improved labor contracts along with incentive discipline are benefitting the industry. In times past the industry used various schemes to spike traffic, only to see sales fall and profits with it once the programs were ended.

China’s annual auto sales should reach 30 million units by 2020 with 32.2 million sales forecast by 2022. China alone will account for nearly half of the world’s incremental growth through 2020.

India is another market in the midst of a healthy growth cycle, while Brazil and Russia continue to experience losses, a trend that won’t end before 2017. Japan and the Eurozone are enjoying a modest uptick in gross domestic product (GDP), but at a pace slower than the current 2.6 percent global average.