Yet another SUV model line is planned for Audi. At the same time, its best selling Q5 will be replaced by a new model.

Is there a tipping point for SUVs? The segment certainly continues to grow, accounting for approximately 40 percent of all new vehicle purchases in the United States. Mainstream and luxury marques alike continue to add them, filling nearly every hole — real or conceived — in the segment.

Audi, like BMW and Mercedes-Benz, has the segment covered. But Audi still sees room for growth and will introduce an all-new model in 2016, the Q2. In addition, the next generation Audi Q5 will also debut, giving this German luxury brand one of the freshest SUV model lines in the industry. 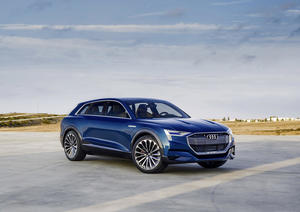 Yesterday, the Audi Group outlined its plans for the coming year with the company’s CEO, Robert Stadler, stating that the automaker will be “continuing with high levels of investment in future technologies to enhance [its] strong position.”

A big chunk of that $3 billion euro investment will come in the form of alternative drive systems, including its first large-series battery-electric vehicle, based on the Audi e-tron Quattro concept. Audi’s already expansive product line will continue to expand and include 60 different vehicles by 2020.

One issue Audi has been slow to resolve is its USB connectivity or lack thereof. Audi does make it possible to connect your smartphone, but only if your personal product and that cable connect — good luck with that, my iPhone 5 simply has no compatible cable.

Despite not offering diesel products over the past several months, Audi has managed to enjoy increased market share. In November, its sales rose by 0.4 percent, but was good enough to record its 59th consecutive month of year-over-year sales increases. Through November, US sales are up 11.7 percent, outpacing the industry. At this pace, Audi should enjoy its sixth straight year of sales growth and top 200,000 units for the first time.

Despite the continued gain, Audi will remain in a distant fourth place in 2015 among luxury makes, finishing behind BMW, Lexus, and Mercedes-Benz, with each marque selling at least 325,000 vehicles per year in the US. New product from Cadillac and Hyundai’s soon to arrive Genesis luxury brand should make things interesting these next few years.

See Also — Crossing Over With the Audi Q3