Eight years is a long time to stay with any model and the XC60 is showing its age. But that fact hasn’t stopped Volvo from making important updates to the 2017 edition in advance of an all-new model debuting in 2018.

When the XC60 rolled out in 2010, critics hailed its wedge-shaped looks, easy to raise liftgate, comfortable front seats, and its turbo kick. The XC60 also represented Volvo’s first shot at a crossover utility vehicle, taking on the likes of the BMW X3, Infiniti EX35, and the Acura RDX. Since then, new or updated players from Lincoln, Land Rover, Audi, and Lexus have been released. Some might also cross shop this model with the Buick Enclave, an SUV with an even longer history of no updates — the Enclave is now in its tenth model year.

Is it a tall wagon or an SUV? That’s a question you might have in mind when viewing the XC60 for the first time. When it comes to models, the Volvo V60 is the standard wagon. On the other hand, the V60 Cross Country is the tall wagon. Figure that all three vehicles offer increasingly higher steps (or ground clearances) on the same platform with the XC60 on top.

Front to back, the XC60 is a sleek SUV with Volvo’s trademark logo fastened to the “smiley” grille. Oversized headlamps, a narrow lower grille opening, and horizontal LED fog lamps complete the frontal presentation. Along the sides, you’ll find a rising belt line, character lines and lower body trim, and alloy wheels.

The rear fascia is marked by a pair of signature combination lamps —stylish and long. A liftgate spoiler, chrome garnish, and a pair of exhaust ports are present. Front and rear skid plates round out the look. 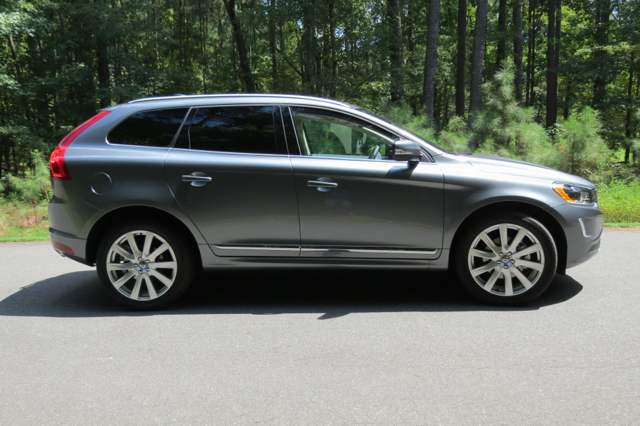 The XC60’s interior is a blend of utilitarianism, clean lines and an excellent fit and finish. That said, the cabin’s simplicity means its competitors’ interiors are typically more elaborate. This is one deficiency that has some critics hesitating to compare Volvo with Europe’s best-selling marques. Instead, Volvo seems closer to Buick — premium, but not lavishly displayed luxury.

My test model had a pair of child seat boosters located in the outboard seating positions. This is a Volvo exclusive feature and a $500 upgrade. Consider it a worthwhile investment if you have a pair of youngsters who have outgrown their baby seats and you’re weighing your booster seat options. Because they’re built in, you’ll never be without them. And, when you need that room for adult passengers, the booster seats fold within the rear seat, out of sight.

Overall, the cabin features an inviting two-tone theme with the seats in a light color and contrasting gray presented elsewhere. Not quite Ikea-spartan, but certainly not lavishly adorned. 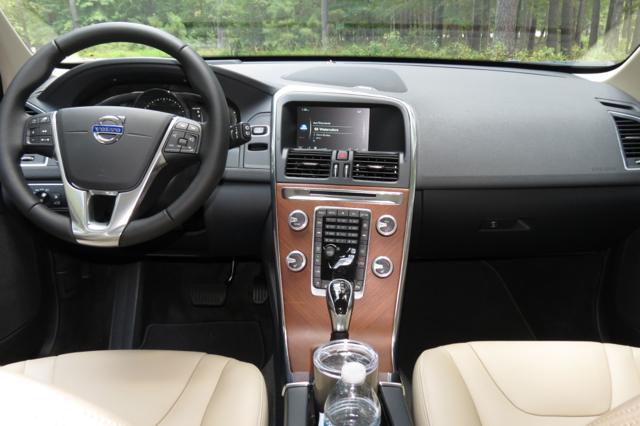 I’m not a fan of Sensus Connect, Volvo’s infotainment system. Yes, it does allow smartphone tethering and provides a Wi-Fi hotspot, it also cleanly and sensibly places information on the color display. What makes it difficult to use is the attendant keyboard — there are simply too many buttons to push — over two dozen — and that’s more steps than what most people want. Volvo will replace the current layout with a new and less cumbersome arrangement next year as currently found on the all-new 2017 XC90.

On the audio front, Volvo doesn’t mess around. You receive a 12-speaker Harmon Kardon system with built-in apps like Pandora and Stitcher. The sound is superb and befits the Volvo.

You would expect every Volvo model to shine in all matters safety, given the company’s pioneering work. Indeed, Volvo introduced the world’s first automatic braking system with cyclist detection in 2013. In 1959, the automaker rolled out a three-point safety belt and followed up with such innovations as a child booster cushion (1976), a side-impact protection system (1991), and a blind spot information system (2004). Dozens more innovations not mentioned should be included with most later adopted by competitors. 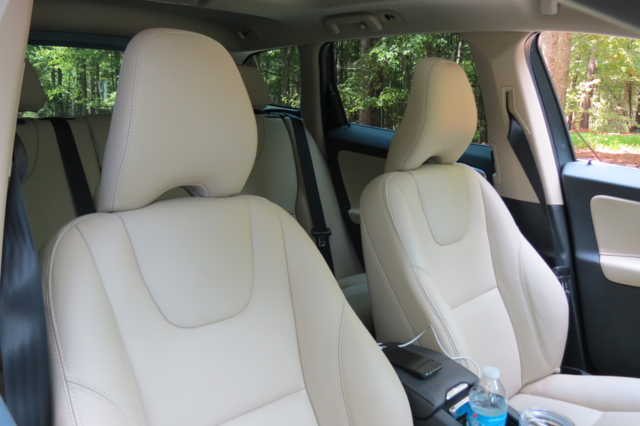 The significant change in 2017 was the elimination of two powerplants. Gone are the previous five- and six-cylinder engines. Those engines represented the XC60’s T5 and T6 lines, respectively.

For 2017, the T5 and T6 names continue, but they now represent a pair of four-cylinder engines displacing at two liters. The first engine is turbocharged and includes direct injection. This engine makes 240 horsepower and 258 pound-feet of torque. The second engine is supercharged, turbocharged, and also has direct injection. This dual forced induction engine makes 302 horsepower and 295 pound-feet of torque. Both engines are paired with an eight-speed automatic transmission.

My test XC60 AWD Inscription model came with the more powerful engine. Wisely, Volvo only offers this engine with all-wheel drive as torque steer would be a nightmare for your driving dynamics.

The unusual forced induction combination gets the job done as the supercharger bangs out power first, followed by the turbocharger. When working in sync, this compact engine quickly reaches peak performance and moves this crossover with authority. The engine is also noisy and not especially refined — for a model starting at $46,350, you’d think it would be quieter. On the other hand, the transmission offers a well-suited pairing for the engine as it seamlessly shifts between gears and matches revs evenly. 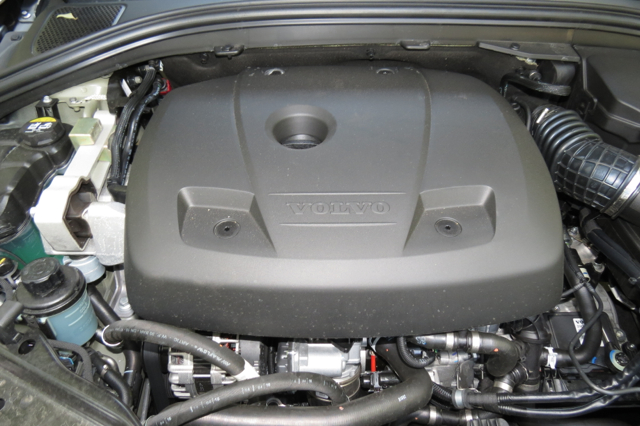 There isn’t anything exciting about the driving dynamics either. But the same can be said for most SUVs except perhaps for models designed from the start to elicit superior steering feedback, outstanding handling, and robust braking. The Porsche Cayenne is one such model that comes to mind.

But most people don’t buy crossovers for performance or want to pay the Porsche price. Interior room, storage capacity, and trailering capabilities likely are more important concerns. In these three areas, the Volvo XC60 demonstrates its strengths.

The standard T5 Dynamic and Inscription models will cost you $40,950. Opt for all-wheel drive and add $2,000 to your price. It is a sensible investment — both for handling improvement and safety considerations.

The T6 Dynamic and Inscription models will run you $46,350. Choose the R-Design and you’ll pay $51,000. The advantage of selecting the R-Design is that you’ll receive every possible safety feature included, except for the dual booster seats.

If you’re inclined to wait another year for the new model you might want to consider the 2017 XC90 instead. Volvo’s newest crossover is its largest one and is priced from $45,750. A seven-passenger model retails for $51,600. Plug-in hybrid versions start at $71,800 and top out at $104,900 for an opulent four-passenger Excellence version. 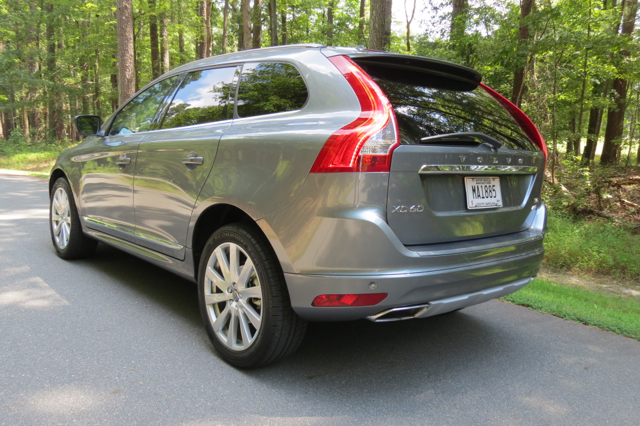 Volvo could have left well enough alone for 2017 and allowed the current-generation XC60 to give way to the next model without updating the engine choices. The dual forced induction engine is its newest offering and supplies small-block V8 equivalent power.

Other models to consider in this segment include the Audi Q5, Lincoln MKX, Cadillac XT5, and the Mercedes-Benz GLC-Class. Most competitors are far newer and offer similar safety features as the Volvo.