Small SUVs are a hot commodity — so much so that at least four models should top 300,000 units sold this year.

The Toyota RAV is in hot pursuit of the segment-leading Honda CR-V, followed by the Nissan Rogue and the Ford Escape. Although sitting in a distant second place among Ford brand products to the F-150, the Escape now outsells Ford’s Fusion sedan, itself one of the top-selling midsize models.

Ford introduced the Escape in 2001, with an updated model appearing six years later. The most important change took place in 2013 when an all-new model was released. The move was significant for Ford as the automaker severed its tie with Mazda (previous models were based on the architecture it shared with the Mazda Tribute) and dropped the hybrid variant. Ford’s compact hybrids are now sold under the C-MAX model range.

The new model offers a modern design, room for five, and three engine choices. Its release was timed perfectly with shifting consumer demand and Ford has reaped those benefits.

But resting on your laurels is dangerous in this business as competitors are quick to pivot in an effort to gain an upper hand. Furthermore, consumers are much less brand loyal than ever as they search for the most modern vehicle with the technology and convenience features that distinguish them. 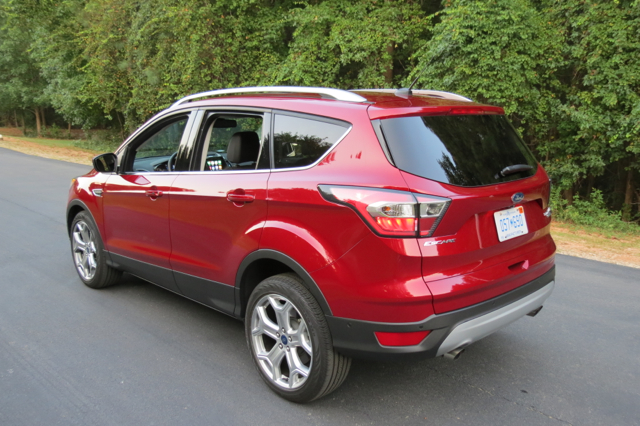 For 2017, the Ford Escape is vastly overhauled, reflecting a significant mid product cycle update. It also follows several interim changes Ford has made year-over-year since the third-generation Escape was released.

Indeed, in 2014 Ford shuffled its trims and made a rearview camera and its SYNC telematics system standard across the model line. In 2016, Ford released the third-generation of its SYNC system, replacing MyFord Touch.

Moreover, the Escape’s list of available safety features has expanded to include adaptive cruise control with forward collision alert, lane-departure prevention, and a driver drowsiness monitor. Ford now offers a Sport Appearance Package on the SE and Titanium trim and continues with this model’s maximum 3,500-pond towing capacity. 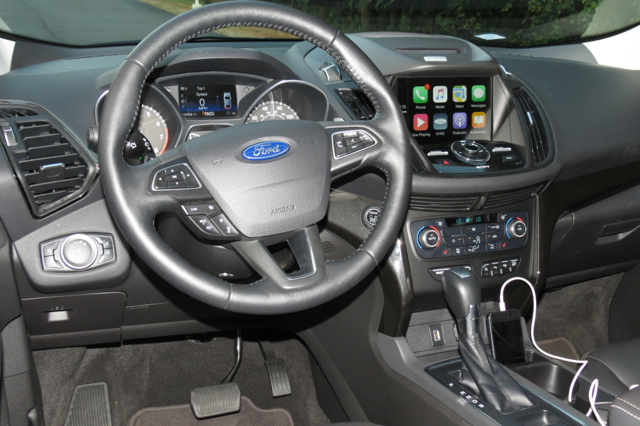 A 2.5-liter four-cylinder engine is found on the S model only and makes 168 horsepower and 170 pound-feet of torque. This model makes an EPA-estimated 21 mpg in the city and 29 mpg on the highway.

Both the SE and Titanium models offer a standard 1.5-liter turbo four-cylinder engine making 179 horsepower and 177 pound-feet of torque. Front-wheel-drive models achieve the best fuel economy for the model line, making an EPA-estimated 23 mpg in the city and 30 mpg on the highway.

The two higher trims also offer an available 2.0-liter twin-scroll turbo four-cylinder engine making 245 horsepower and 275 pound-feet of torque. This model makes an EPA-estimated 22 mpg in the city and 29 mpg on the highway.

All three engines are paired with a six-speed automatic transmission. The standard 1,500-pound towing capacity with the base model can be upgraded to 3,500 pounds with the 2.0-liter engine and with the available Class II trailer tow prep package ($495) optioned. 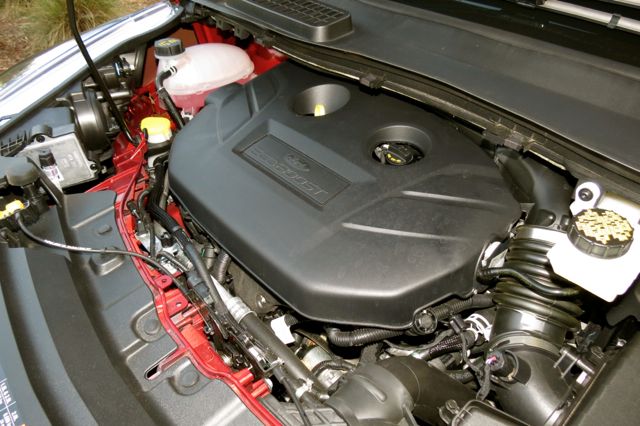 Equipment levels vary (and in some cases widely) from base to high-end model. Standard exterior equipment includes a black grille, 17-inch wheels, halogen headlamps, and power side mirrors.

Keyless entry is standard; push-button start is found in the Titanium model only. Inside, cloth or leather seat trim is included. A power-operated driver’s seat starts at the SE level. Although the Escape offers room for five, it is best suited for four — consider the middle seat position your comfort space with its pull-down armrest and two cup holders (not available in the S model).

Power accessories, a six-speaker audio system, SYNC voice recognition, and climate control is standard. As for the Escape Titanium, a Sony 10-speaker audio system is included. Steering wheel-mounted paddle shifters are found except for the base model. 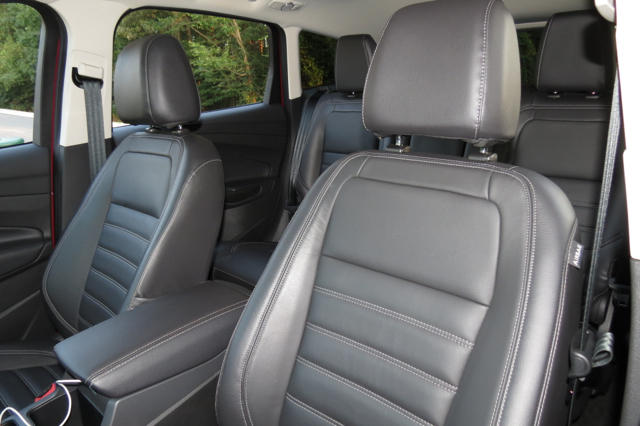 Standard cargo space is excellent, measuring 34 cubic feet. Not only can you hold all your groceries with ease, but you can pack the back for a long weekend away with the family. If you don’t need the rear seat, then fold it and you’ll double your cargo carrying capacity.

On the safety front, the 2017 Escape achieved “good” scores from the Insurance Institute for Highway Safety (IIHS) in four categories: moderate overlap front, side, roof strength, and head restraints & seats. The Institute assigned an acceptable score in the small overlap front test. “Good” is the IIHS’ highest score followed by acceptable, marginal, and poor.

All 2017 Escapes come with a suite of airbags, including a driver’s knee airbag. A rearview camera is standard. Incidentally, most driver assist technologies show up on the Titanium level, but only as part of a $1,995 technology package.

Our all-wheel drive test model was equipped with the larger turbo engine. Let me say this: it provides much more power than what most people need, but having access to its enhanced performance isn’t something you’ll easily dismiss once experienced.

To illustrate, the mighty four acts like a strong V6 — a generation ago it would have beaten not a few small block V8s in overall performance. Wonderfully, this twin-scroll engine is imbued with better technology than a traditional turbo as it gathers engine exhaust from cylinder pairs in alternating sequence. Specifically, these alternating pushes go far in eliminating lag, the bane of turbo engines. All things considered, you’ll zip away from a dead stop and tap robust power as you race down the road. No, the Escape isn’t meant for racing, but with all-wheel drive, adept steering, and confident handling, you’ll shine on the straightaways. Twisty roads mean you’ll experience some body roll, but it is far from what you’d face with front-wheel drive only or with larger, more cumbersome models. The Escape shares its DNA with the Ford Focus, one of the more competent small cars out there.

Clearly, the 2017 Escape is a compelling model. It also becomes quite pricey when choosing the Titanium model, the available twin-scroll engine, and several packages. As a matter of fact, more than $35,000 pricey when fully loaded. That’s a high price to pay for a small SUV.

Instead of the Titanium, consider the SE trim. If you need all-wheel drive and prefer such equipment as BLIS, reverse sensing, an upgraded audio package, and SYNC 3, then the $1,395 equipment group is a must. Add in a panoramic vista roof ($1,495) and the power liftgate ($495) and you’ll pay about $30,000 to acquire this vehicle. At any rate, that’s a price point in line with it competitors, although you’re also forgoing the more powerful engine and a number of driver assistance features.