Small means big when it comes to the VW Jetta.

Following an extensive refreshing for 2015, the Jetta received a more powerful base engine for 2016. Changes for 2017 include an updated infotainment system with a USB connection, available driver assistance features extended to lower trim models, and a standard rearview camera.

The previously available turbo-diesel engine has been dropped due to the automaker’s violation of emissions standards. The hybrid model has been discontinued as well. 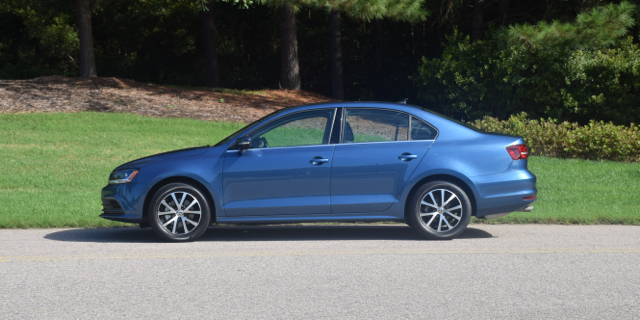 If you think the Jetta’s design seems like a throwback to another era, you aren’t alone. Its profile suggests a circa 1990s sedan, but with a far more streamlined appearance. But this general boxiness has a distinct advantage — the interior is quite large as is the trunk.

This model is marked by a long, narrow horizontal grille honed in by large combination lights accented by distinct LED lights. The lower grille opening is sporty with layered skirting. Squared edges and even lines are present, front to back. An even beltline, body sculpting, and alloy wheels amplify the profile. From the rear, the 2017 Jetta has large wraparound combination lamps, body sculpting, reflector lights, and an exhaust tip. 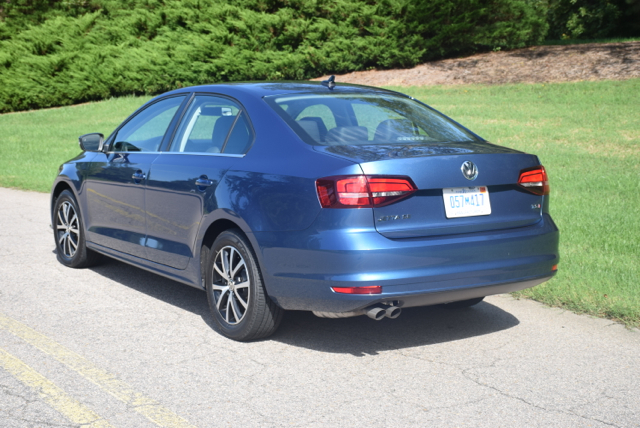 If you were to be placed inside the Jetta blindfolded and felt your way around, you might insist that you were in a midsize sedan. Such are the proportions of this vehicle as it comes as close to a midsize sedan as it possibly can. That fact alone gives the Jetta a distinct marketing advantage as it holds five with no penalty seat present.

The interior layout is simple, if not uncomplicated, with a clean dashboard featuring available soft touch materials and chrome-like trim. The instrument panel is marked by a pair of analog displays set within oval recesses. The leather-wrapped steering wheel has a flat bottom with the expected secondary controls on its face.

Moving to the center stack, the color display is centered underneath a pair of air vents with switches and knobs controlling same. The climate control panel is below that and a large open storage compartment is at its base — perfect for holding and connecting your smartphone. The gear shift, two cup holders, the emergency brake, and an armrest/storage compartment split the front seats.

You’ll find much comfort and support with the driver’s seat. Available full power and lumbar support provide what most drivers need. The rear seat offers a 60-40 split folding design along with a pass-through to the trunk. That trunk measures 15.5 cubic feet of usable space and is larger than most midsize sedans. 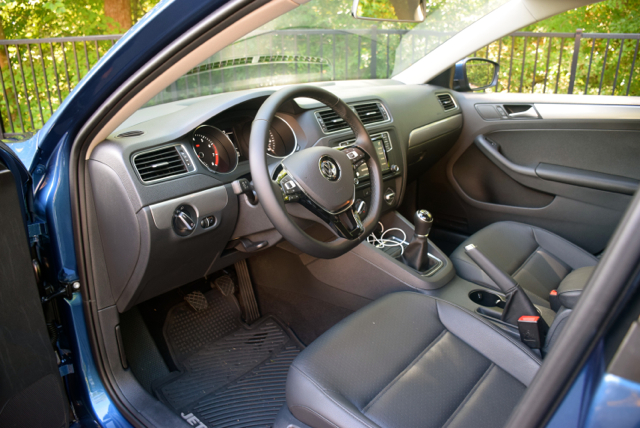 On the technology front, the 2017 VW Jetta has a new MIB II touchscreen infotainment system. The unit’s display makes use of a capacitive touch sensor (just like in your smartphone or tablet ) enabling gesture controls such as swiping and pinch-zooming.

The usual complement of safety features is included in the 2017 Jetta such as six airbags, stability control, electronic brake-force distribution, and brake assist. New for this year is the available post-collision braking system, enabling the vehicle to stop once the front airbags have been deployed.

As a result of its many safety features and its excellent performance in crash tests, the 2017 Jetta garnered the Insurance Institute for Highway Safety’s highest award — Top Safety Pick+. The IIHS assigned the Jetta with its top score of “good” in all five major crash testing categories. The institute also recognized the sedan’s crash avoidance & mitigation system with an “advanced” score. 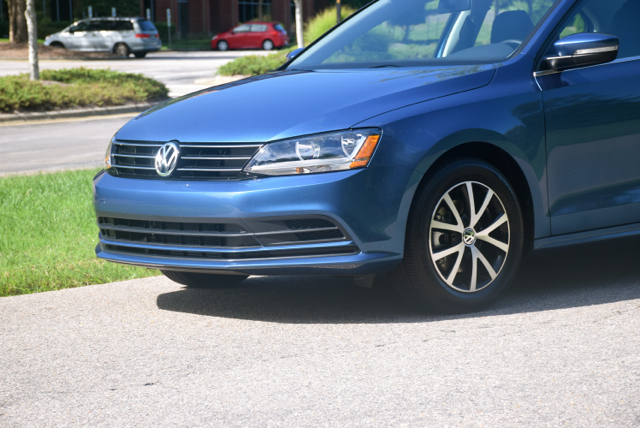 With the turbo-diesel no longer offered, customers must now choose among three turbocharged four-cylinder gasoline engines, including an all-new base engine.

The smallest of the three engines displaces at 1.4 liters and is standard on the S and SE trims. It produces 150 horsepower and 184 pound-feet of torque, and comes paired with a five-speed manual or a six-speed automatic transmission. This model is also the fuel economy leader, achieving up to 28 mpg in the city and 40 mpg on the highway.

A 1.8-liter four-cylinder engine is the middle choice (SEL trims), making 170 horsepower and 184 pound-feet of torque, and comes paired with a five-speed manual or a six-speed automatic transmission. This model makes up to 25 mpg in the city and 36 mpg on the highway.

The largest engine displaces at two liters and makes 210 horsepower and 207 pound-feet of torque. Available only in the GLI edition, this engine is paired with a six-speed manual or a six-speed automatic transmission, and makes 24 mpg in the city and 33 mpg on the highway. 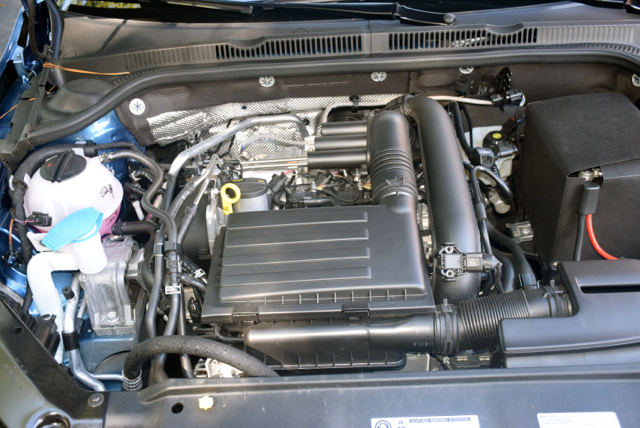 As tested, Volkswagen supplied a Jetta SE equipped with the smallest engine. We found the engine responsive, peppy, and up to the task. The test model was also outfitted with a five-speed manual transmission. We immediately discovered it shifted quickly between gears and very importantly we did not miss the sixth gear, the typical number of forward gears for today’s manual transmissions.

The Jetta handles better than most small sedans. It comes with electric power steering — offering a precise feel — and confident ride control. This sedan stays planted and braking is firm. You couldn’t go wrong buying this sedan based on that criteria.

The Volkswagen Jetta sneaks into the compact segment as one of the largest models of its kind. It doesn’t have the sleek appearance of a Ford Focus or the sharp lines of the Hyundai Elantra. Yet, it does offer a tidy package at a competitive price with a bevy of options to elevate that experience.

The 2017 Jetta can get very pricey too, pushing $30,000 in the GLI SEL. That’s an unusually high price point for a mainstream compact car and may have some shoppers considering the similarly priced Audi A3 instead. With no diesel available, a huge purchase consideration has been removed and that’s a concern for some shoppers. However, with three gasoline engine choices available, including the base engine making 40 mpg on the highway, efficiency remains part of the Jetta hallmark. 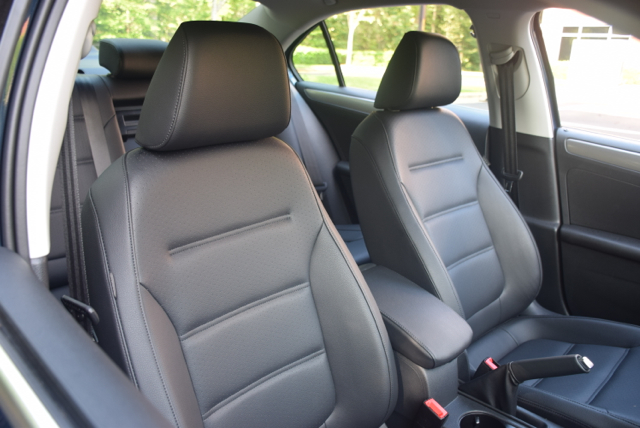