The Lexus ES is a luxury sedan requiring no introduction. Now in its sixth generation, the ES line is one of two models that launched the Lexus brand in 1989 (the flagship LS is the other one) and remains Lexus’ top-selling model behind the RX SUV.

The ES line has always represented a front-wheel drive model powered by a V6 engine. Only since 2013 has a hybrid 300h variant been offered, a surprising fact to some given that nearly every other Lexus line has offered a gas-electric hybrid.

Also new for 2017 is the Scout GPS Link to its standard display audio system. Lexus says that with the app on the driver’s smartphone, navigation maps, and turn-by-turn directions appear on the car’s central display screen. 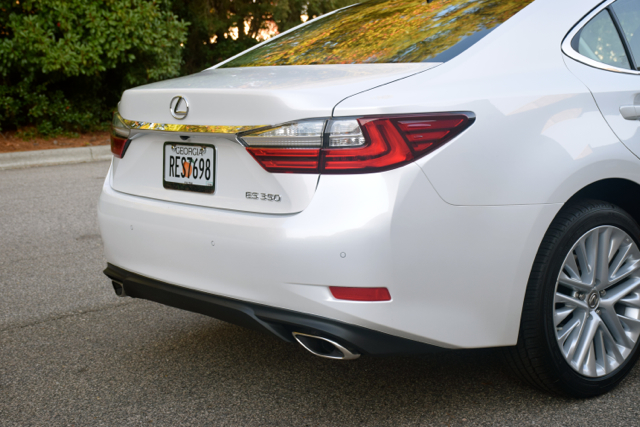 Made in the USA

As has been the case with previous ES models, this sedan typically garners attention from people familiar with the brand. Indeed, I’ve had friends, neighbors, and strangers ask me about the model and more than once they’ve said the ES is or would be their Lexus model of choice. That appeal meshes well with Lexus marketing as the ES remains one of the entry-point models for the brand.

The ES 350 has the distinction of being the only Lexus model built in the US (the RX and RX Hybrid are built in Cambridge, Ontario). In 2015, Lexus shifted ES 350 production from Japan to its Erlanger, Kentucky, manufacturing plant. However, the hybrid variant is still built in Japan.

Coinciding with the release of the current-generation model in 2013 is when the ES assumed its current design language. A refresh in 2016 only sharpened that look with a more distinctive spindle grille, new headlamps, and more pronounced embrasures for the fog lamps added. 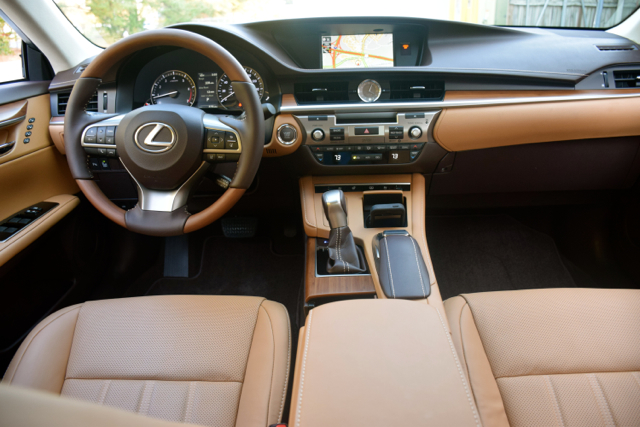 The Lexus ES is classified as a midsize luxury sedan, but it seems larger than that. This model seats five in comfort with generous amounts of head, shoulder, hip, and leg room all around. This is where the sedan’s front-wheel drive layout works to the advantage of the ES — no big drivetrain hump interferes with leg space.

Plush and supportive bucket seats with 10-way power support are found up front. A three-place bench seat is in the second row with a pass-through to the trunk. By the way, the trunk measures 15.2 cubic feet or about average for this segment.

All models are outfitted with an eight-inch touchscreen display and are compatible with Siri Eyes Free. A rearview monitor, an eight-speaker audio system, CD player, HD Radio, satellite radio, Bluetooth connectivity, and USB and auxiliary ports are included. Lexus Enform is included with the available navigation system and brings in apps, safety features including automatic collision notification, and remote access via your smartphone.

Crash test results are pending for the 2017 model. The 2016 edition was an Insurance Institute for Highway Safety (IIHS) Top Safety Pick+ recipient. With the Lexus Safety System+ package now standard, we expect the 2017 ES will retain its top safety billing once again. Lexus doesn’t mess with success when it comes to the ES powertrain. A 3.5-liter V6 engine making 268 horsepower and 248 pound-feet of torque is paired with a six-speed automatic transmission. No forced induction. No eight-speed transmission. And no optional all-wheel drive.

But with a curb weight of just 3,571 pounds, the ES is surprisingly lightweight and certainly well-suited to move the sedan. Car and Driver recorded a 0-60 mph time of just 5.8 seconds for the 2015 model, a number that comes in much lower than the 7.1 seconds time offered by Lexus. Figure your numbers will fall somewhere in the middle.

Stomp on the accelerator and the ES quickly comes to life. You’ll feel a slight tug of the steering wheel, but torque steer isn’t a significant issue. This sedan zips down the freeway entrance ramp with authority. When passing on the highway you’ll have just the right amount of power to squeeze past that semi. The transmission shifts seamlessly between gears and that’s everything you should expect in the ES.

The Lexus ES is tuned for the road, offering a quiet interior and a soft ride. The drive mode select feature can be dialed to the level of comfort that suits you best — eco, normal or sport. You’ll want to choose the latter for at least some level of driving feedback, otherwise don’t expect much engagement. 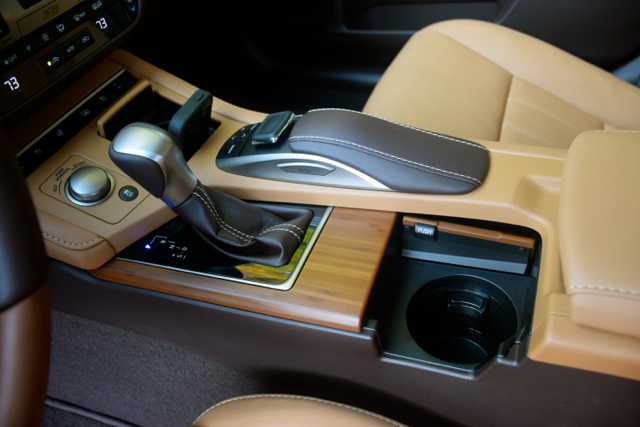 If you are seriously considering the 300h, you need to determine whether the reduced level of power in the hybrid is fine for you — there is no escaping the fact that a performance difference is present — 200 hp v. 268 hp. On the other hand, the high mpg potential with the 300h is certainly attractive.

Both models are mono-spec — one trim level. However, package upgrades allow for further customization. Our test model came with two, including luxury ($1,670) — composed of heated and ventilated front seats, a heated steering wheel, power rear sunshade — and a navigation system with the Mark Levinson audio package ($2,590).

Individual options include such amenities as a heated wood and leather steering wheel ($450), panorama glass roof with power moonroof ($500), upgraded 18-inch wheels ($880), blind spot monitor with rear cross-traffic alert ($500), and LED headlamps ($515). Quite easily, you can add upwards of $10,000 to your final price by claiming every package and choosing most options. If you’re looking for the performance side of the Lexus sedan range, check out the compact IS and the slightly larger GS lines. Both models offer standard rear-wheel drive, available all-wheel drive and turbo options. Of course, if it is simply a matter of getting your first Lexus, the CT200h (hybrid), NX200 (SUV), and the IS lines are other places to start.

In all, the Lexus ES provides what the vast majority of luxury shoppers want — a comfortable, well-equipped sedan with high-quality materials, superior fit and finish, and a reliability record second to none. You get all this in more in the Lexus ES — your only dilemma is whether to go with the gas or hybrid model.