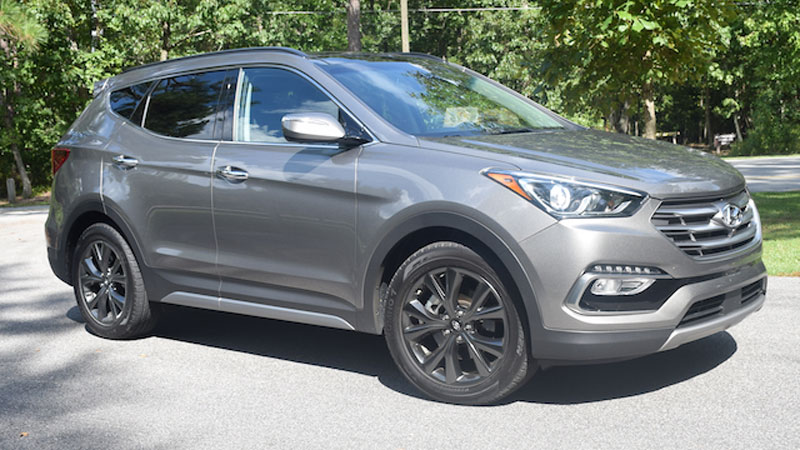 Now in its fourth year, the midsize Santa Fe Sport SUV has been mildly refreshed.

Hyundai has the midsize SUV segment nailed down with two very similar models: the two-row, five-passenger Santa Fe Sport and the three-row, seven-passenger Santa Fe. The latter one is based entirely on the former with an extra four inches present between the wheels to accommodate the third row.

From 2001 to 2013, there was only the Santa Fe, initially a compact crossover then later a midsize SUV. Both models offered room for five and that’s when Hyundai knew it needed a third model to serve an expanding market, especially following the demise of the seven-seat Hyundai Veracruz.

So, with the release of the third-generation Santa Fe in 2014 the model line split was on.

A 2017 Hyundai Santa Fe Sport 2.0T Ultimate edition was a recent weekly visitor, representing the highest of three trim levels for this model.

Now in its fourth year, the current-generation 2017 Santa Fe Sport benefits from a mid-product cycle update with refreshed front and rear styling. An available 7-inch color display is now compatible with both Apple CarPlay and Android Auto.

The safety changes should help the 2017 Santa Fe Sport once again garner the prestigious Top Safety Pick+ award from the Insurance Institute for Highway Safety (IIHS). This model also carries a 5-star safety rating from the National Highway Traffic Safety Administration (NHTSA). Both awards enable the Hyundai to stay at the forefront of all things safety.

You get a choice of two powertrain combinations with the 2017 Hyundai Santa Fe Sport.

All Sport models are powered by a 2.4-liter, four-cylinder engine making 185 horsepower and 178 foot-pounds of torque. This engine is paired with a 6-speed automatic transmission with manual shifting capabilities. It is EPA-rated at 21 mpg in the city and 27 mpg on the highway.

Choose the Sport 2.0T and the Sport 2.0T Ultimate editions and your models are powered by a 2.0-liter, turbocharged four-cylinder engine making 240 horsepower and 260 foot-pounds of torque.

This engine is paired with a 6-speed automatic transmission and it also allows for manual shifting. Fuel economy is nearly the same coming in at an EPA-rated 20 mpg in the city and 28 mpg on the highway. Both models take regular grade gasoline.

Hyundai’s styling direction began to change in 2010 with the release of the updated Sonata midsize sedan. Since then, every model has benefited from what the automaker calls “fluidic sculpture,” and most current Hyundai models now reflect the latest version of it.

Up front, this model features a trapezoidal grille, sleek wraparound headlamps with LED accents, available fog lamps, and a sporty lower intake. Deep creases along the hood only amplify this model’s frontal presentation.

Along the sides, you’ll find a rising belt line, a sloping roof line, upper and lower character lines, additional sculpting, and fashionable alloy wheels. From the rear, this SUV offers a tailgate spoiler, wraparound combination lamps, reflector lights, and yet more sculpting and lines. Overall, the look is athletic, suggesting a model ready to take on the road.

Depending on the trim, you can also get roof side and cross rails, side mirror turn signal indicators, HID headlights with LED accents, LED daytime running lights, LED tail lights, a proximity key with push-button start, and a hands-free liftgate with automatic open.

The 2.0T Ultimate test model had each of these features. The only option was the HID headlights with dynamic bending light technology, designed to turn the headlights with the direction of the curve as you turn the steering wheel.

It offers an extra measure of safety as it allows you to see on the far corners and pick up something that may typically reside just outside your line of sight — such as that whitetail ready to make a move in front of your vehicle.

Inside, the cabin is airy and bright with similar curves and lines as offered on the exterior. The instrument panel is dominated by a pair of oval housings for the speedometer and tachometer; the digital driver’s information display is located between the two.

The center stack offers a modern expression with the color display flanked by a pair of wing-like vents. Beneath that are knobs and switches controlling the climate and audio systems. At the base of the stack is an open storage area featuring USB connections and a 12-volt outlet.

Between the front seats is the transmission shifter, a pair of cupholders, and an armrest doing double duty as a deep storage area. All four doors provide bottle holders and additional storage. Two more cupholders are found in the rear when you pull down the center arm rest.

The Santa Fe Sport provides room for five and without compromise. The front seats are firm, yet supportive. The rear 40-20-40 bench seat holds three with ease — you’ll find sufficient head, shoulder, hip, and leg room back there.

One of my favorite features about this model is the generous standard storage space — 35.4 cubic feet. Fold down the second-row seat and that space doubles.

You’ll also find a nifty under floor compartmentalized storage tray in this SUV. It’s ideal for secreting away items out of view or for holding in place your groceries. The spare tire is located underneath the vehicle.

Hyundai provides a long list of standard features, including numerous convenience touches. The stain-resistant cloth covered seats are standard; leather seats are included except with the base model.

Again, because I had the top-of-the-line model, everything was included. The only extras were the adaptive cruise control and the electronic parking brake.

Taking this SUV on the road is a joy. Admittedly, the turbo took some getting used to as the expected lag held up the full force of power, but not for long. Quite frankly, this SUV kicks it and that means there is no lack of power once the turbo has spooled up.

Fortunately, full-on power comes along low in the RPM band and keeps on giving. You’ll feel copious amounts of power at work as you pick up speed — thankfully I had all-wheel drive as I can imagine that torque steer is quite noticeable when combining the turbo with front-wheel drive.

Not many SUVs are fun on twisty roads, but this one is. Even though it is on the heavy side — weighing in at just over 5,000 pounds — there is a certain agility present.

Switch the drive mode to Sport and you’ll notice a change in engine throttle response and steering feel — along with all-wheel drive, all this is amplified with all-wheel drive. Very little pitching was felt as the Santa Fe Sport stayed planted as I deftly navigated the back roads an hour south of my home.

No, I wasn’t about to rip into my turns at full speed. At the same time, I didn’t find myself frequently braking in an effort to keep this SUV under control. As for braking, I found the brakes are firm with very little fade of note.

There aren’t too many midsize SUVs with two rows — most models offer three rows. The Santa Fe Sport goes up against some formidable competition in the Ford Edge, Nissan Murano, and the Jeep Grand Cherokee, but it holds its own. And it does so without offering a V6 engine option — all three competitors have them.

Personally, I would steer away from the standard model with the base engine simply for the reason it doesn’t offer anywhere near the power of the turbo. And all-wheel drive only enhances this model’s handling capabiliity, what also serves as a safety factor under certain driving conditions.

In all, Hyundai has a strong competitor in the Santa Fe Sport, a model that is sporty, roomy, comfortable, and comes well equipped.