Watch or read the news and you may have a different take on a story compared to the person observing it with you. That’s nothing new, especially in the way stories are presented by various networks, newspapers, and individuals.

The Ford Motor Company announced on Tuesday its plans to invest additional money covering three Michigan plants, on top of the one plant it had previously targeted. The earlier announcement, made in January, was for $700 million and 700 new jobs at the Flat Rock Assembly Plant, while the latest plan adds an additional $1.2 billion and creates 130 new jobs, raising Ford’s new investments in Michigan to a grand total of $1.9 billion for 2017 alone. In all, 830 new Michigan jobs are on the way.

Ford says the investment comes as it seeks to strengthen two of its profit pillars — trucks and SUVs — as well as expand the company’s mobility initiative. 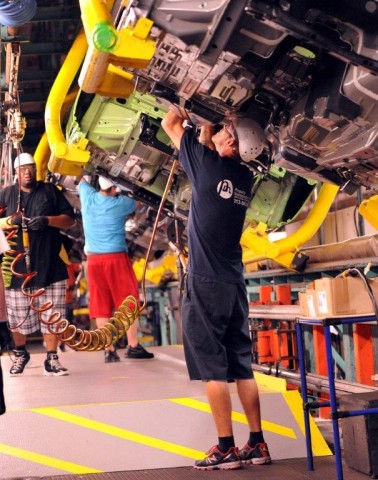 So, here is how the $1.9 billion will be earmarked:

2. Michigan Assembly Plant (Wayne) — Ford’s Wayne, Michigan, assembly plant will receive $850 million in upgrades to produce the Ford Ranger (2019) and the Ford Bronco (2020). Work begins next May to transform the plant, with plans to remove and install the tooling in just four weeks.

3. Romeo Engine Plant — Ford’s Romeo engine plant will benefit from an expansion to allow it to build engine components for several vehicles, including the Ranger and Bronco. The plant already produces engines for the Super Duty, E-Series, Ford Shelby GT 350 Mustang and Shelby GT350R Mustang, along with components for F-Series, Mustang, Explorer and Edge. Ford says 130 new jobs will be created to handle the expanded capacity.

4. Data Storage Expansion. The automaker’s data storage requirements are expected to increase sharply over the next four years. To handle the growth, Ford is investing $200 million to upgrade its data center for improved storage, processing, and integration of this data. A side benefit will enable Ford to introduce new mobility products and services.

“At Ford, we are investing aggressively in building on our strengths today – including trucks, vans, commercial vehicles, performance vehicles and SUVs – while at the same time growing our leadership in electrification, autonomy and mobility services,” said Joe Hinrichs, Ford president, The Americas. “As America’s top producer of automobiles, we are proud to be going even further in our commitment to invest in manufacturing here at home.”

Ford says it investments are supported by the automaker’s partnership with the UAW, as well as with federal, state, county and local governments.

“UAW-Ford is proud of the total investments in three of our Southeast Michigan assembly and engine plants, which will lead to stronger job security for our members and continued support for the surrounding communities,” said UAW-Ford Vice President Jimmy Settles. “Thanks to collective bargaining, the hard-working men and women at each of these locations will now reap the full fruits of their labor. We look forward to celebrating more product investment and job growth at each of our UAW represented facilities in the months and years to come.”

For a full day leading up to Ford’s announcement, news that something was brewing surfaced on media outlets online. Further, just hours before Ford released details of its plans, President Donald J. Trump tweeted — “Big announcement by Ford today. Major investment to be made in three Michigan plants. Car companies coming back to U.S. JOBS! JOBS! JOBS!”

The president has been pushing automakers to expand jobs stateside, giving him yet another victory lap to run.