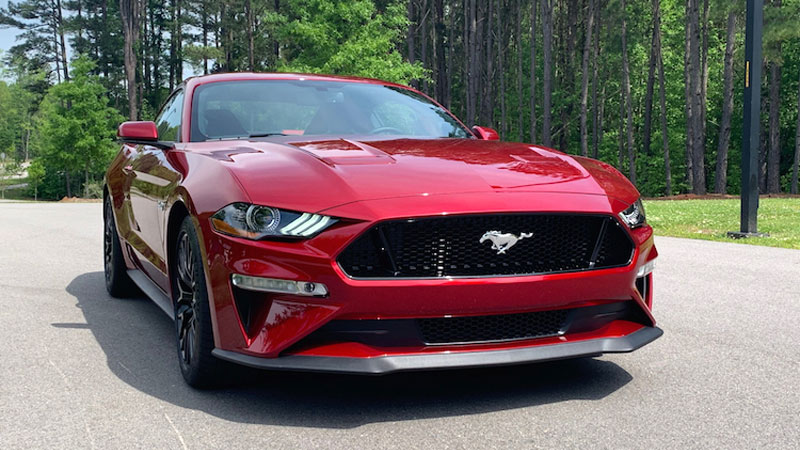 The 2019 Ford Mustang returns with trim and package changes. The big news, however, is the iconic Bullitt model returns. The current Mustang is based on the six-generation model, which rolled out in 2015.

The convertible is available on the first, second, and fourth trims. Here, you’ll add $5,500 to acquire one.

Highlights of the 2019 Ford Mustang GT 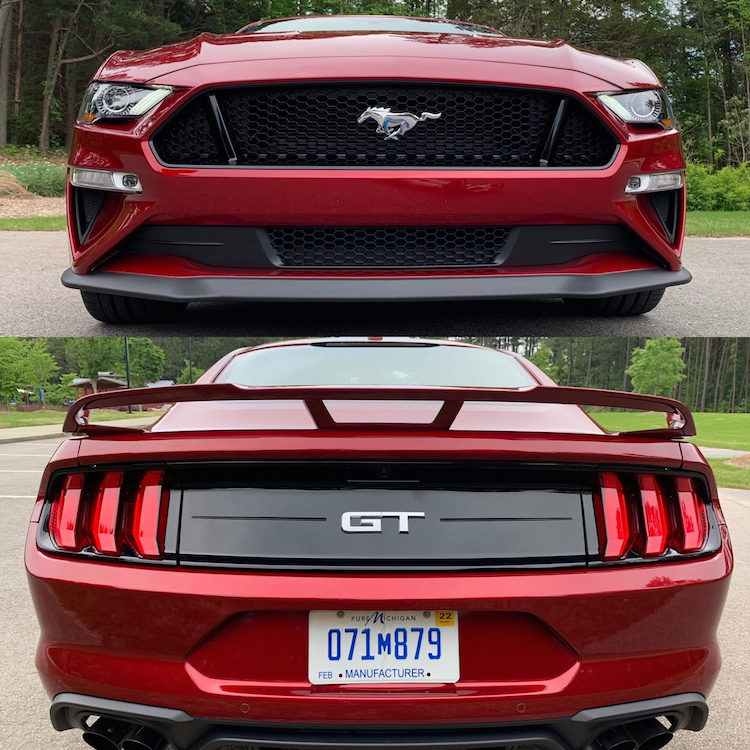 We’ve reviewed the current-generation Mustang extensively, so we’ll depart from our normal procedure by simply focusing on some of the salient points or highlights of the 2019 model.

1. More power at your disposal. 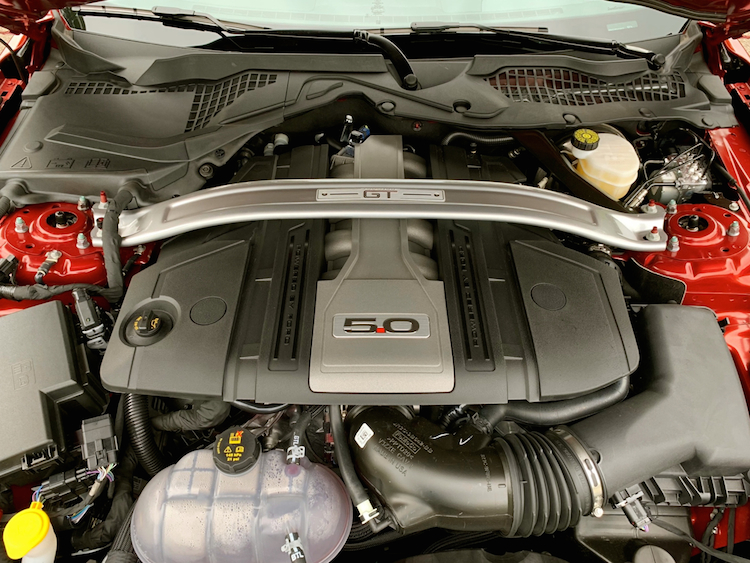 Importantly, fuel economy is up slightly, thanks in part to a now-available 10-speed automatic transmission, which replaced the previous 6-speed automatic. The Tremec-supplied 6-speed manual gearbox is still available and was included with our test model. This made us happy. 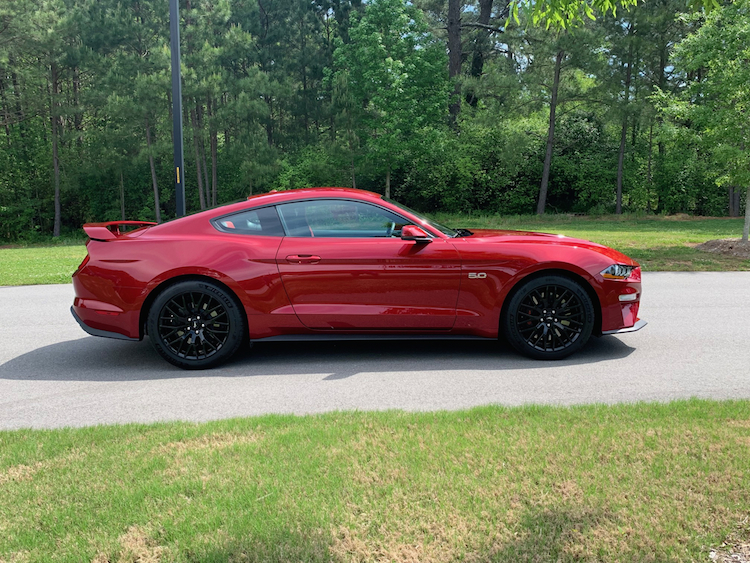 One new feature that rolled out in 2018 for the standard GT model expands to the GT Premium this year. And that’s none other than the handsome “California Special” package, which is a tribute to the original.

This special package includes a fading stripe that connects the side badge to the rear fender scoop. On the trunk lid is a California Special badge dressed in ebony black and race red script. 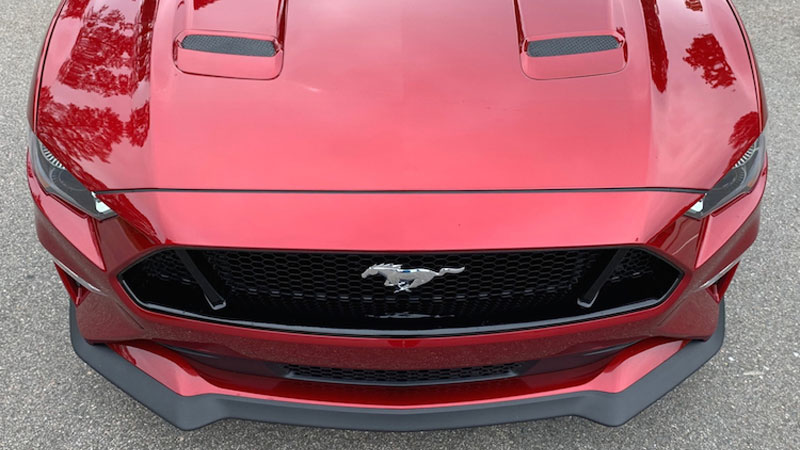 The Ford Mustang has been featured in many films down through the years, including “Goldfinger,” “Diamonds Are Forever,” and “Gone in 60 Seconds.” What’s especially interesting about the first one is that the Mustang appeared just months after it was launched.

In effect, the early placement set the tone for appearances in subsequent movies, ensuring the public understood the potential prowess of the blue oval’s stallion.

While movie placement of cars is certainly a big deal, there is one flick synonymous with the Mustang and that’s none other than “Bullitt,” a 1968 cult classic featuring the legendary actor Steve McQueen. McQueen’s character, Frank Bullitt, is a police inspector and in this film, he is being hunted by assassins in a black Dodge Charger.

Filmed on the streets of San Francisco, Bullitt’s special green Mustang GT Fastback (with a four-speed manual gearbox) stayed ahead of the Charger throughout the near 11-minute chase scene. In reality, the Charger was faster than the Mustang, but as far as movie-goers understood, the Bullitt was king. 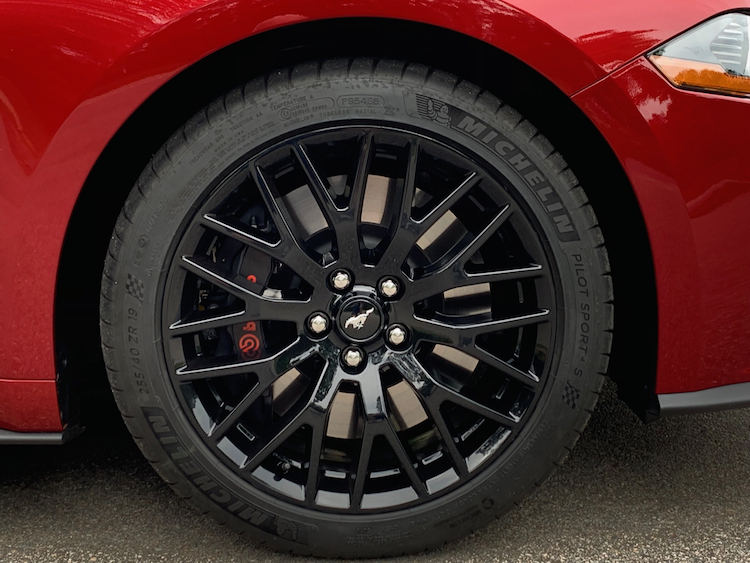 To mark the 50th anniversary of the film, Ford rolled out a tribute Bullitt model in 2018. It returns for another year. The Mustang Bullitt has a $7,240 price premium over the GT Premium coupe (you can’t buy a convertible), but it shares the same 5.0-liter V8 engine of the GT, with an additional 20 horsepower at your disposal.

Like the Shelby, it only has a 6-speed manual gearbox (with a white cue ball shifter). Other standout features include its Dark Highland Green patina, chrome accents, available Recaro black leather-trimmed seats with unique green stitching, and a 12-inch all-digital instrument panel display. 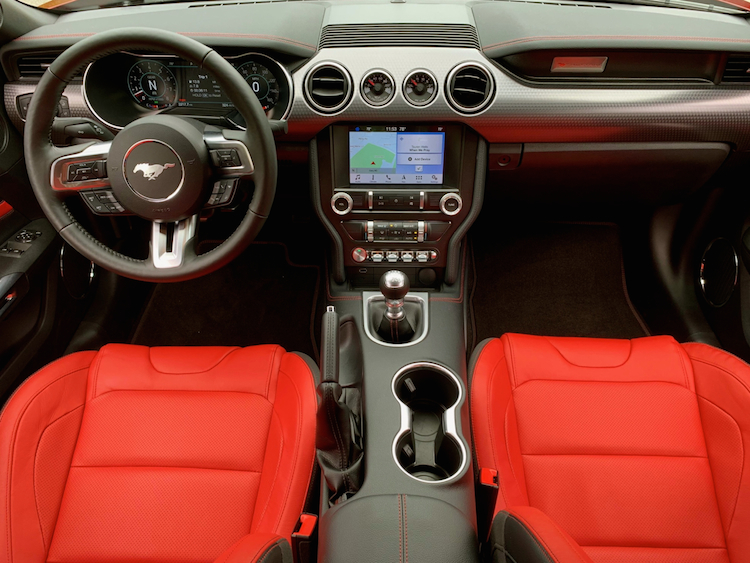 The Mustang GT is lit and that’s a simple description of this potent stallion. We love our naturally aspirated V8s and nothing else will do.

That’s why the competing Chevrolet Camaro and Dodge Challenger also have V8s — small turbocharged four-cylinder engines and V6s are reserved for the base models (the Challenger starts out with a V6).

Press the ignition and the Mustang GT roars to life. Its quad-tip exhaust lets out a boomlet, underscoring this model’s potency. Thankfully, a six-speed gearbox was supplied. Yes, the 10-speed automatic with paddle shifters is a strong option, although it simply cannot supply the same level of driving engagement as the manual.

Happily, the gear shifter is firm, yet pliable. Clean clutch uptake and rev-matching downshifts are two of its top attributes. 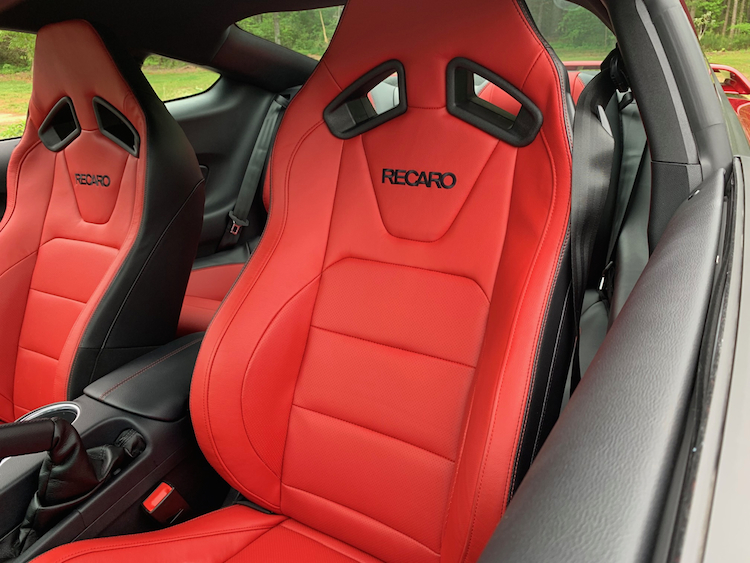 If you’re looking for an impressive 0-60 mph time, the Mustang GT does not disappoint. In fact, Ford claims you’ll reach that speed in just under four seconds, effectively beating some of the best models from Porsche and BMW.

You’ll achieve this feat with the automatic and trail by a split-second or two with the manual — a quick shift up to third gear will take you there. Keep the pedal to the metal and your quarter-mile run is equally impressive — about 12 seconds.

My test model also had the Magne-Ride Damping System ($1,695) and the Active Valve performance exhaust, a switch-operated system that allows you to switch between quiet, normal, sport, and track sounds. Be a good neighbor and keep the switch on quiet until you head away from your home.

Downshifting produces beautiful back pressure rumble, something this driver never tired of. Ford built in a nice balance of engine and exhaust noise, what you’d expect for a performance model.

On the road, the Mustang GT excels in straight-line driving, but also does quite well on twisty roads and when cornering. It weighs in under two tons, which compares favorably to the Camaro, but is several hundred pounds lighter than the Challenger. This Mustang’s steering is sufficiently weighted and supplies wonderful feedback.

My sample model also had the standard and selectable electric power-assisted steering (EPAS) system, which offers comfort, normal, and sport modes. Check out the instrument panel as it switches to a track-like layout in sport mode. 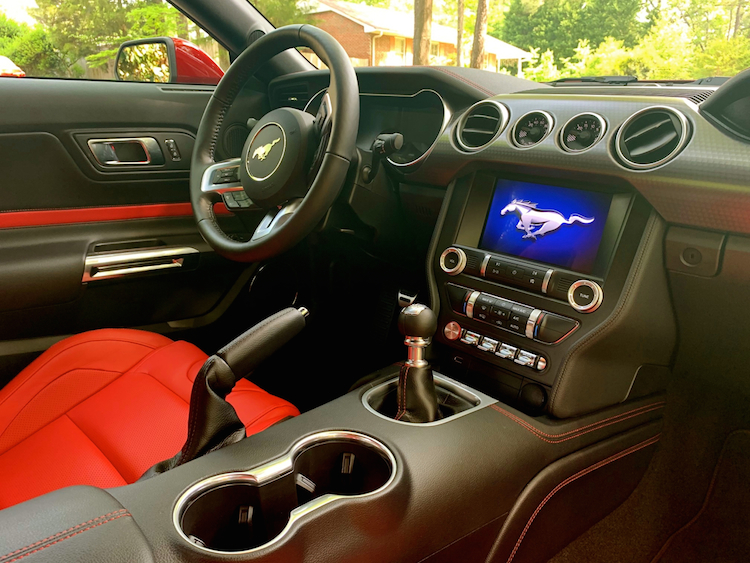 The Mustang’s ride is firm, yet comfortable. The Mustang GT begs to be unbridled with an intense gallop its calling card. It hugs the road with precision, enters corners without drama and exits same seamlessly.

If you’re in doubt that the Mustang GT is a sports car, spending a few hours behind the wheel of one and putting it through the paces will demonstrate that it is.

Importantly, the “thrill quotient” is high, what makes this steadfast stallion a wonderful, driver’s car. 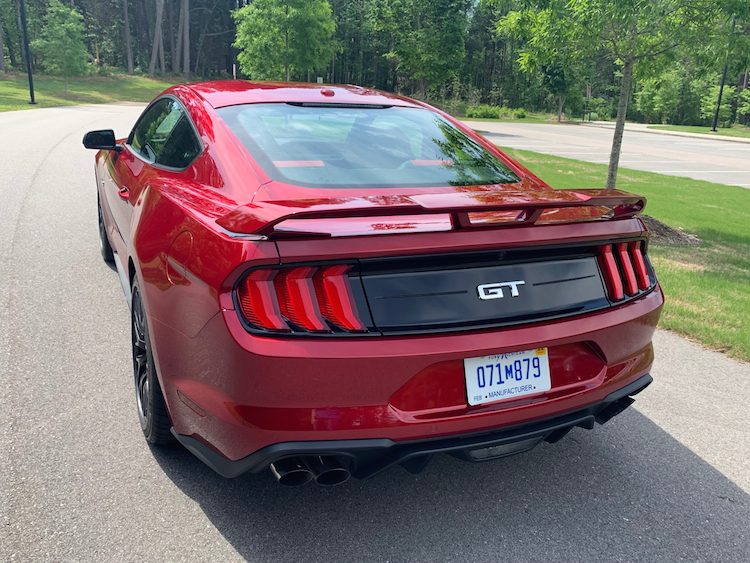 I’m frequently asked about price when it comes to the models I drive. When I mentioned “$50,000” for the Mustang GT Premium, some people expressed surprise. But that’s with every option package taken, which adds more than $10,000 to the cost.

If you’re serious about performance, you’ll gravitate to the packages, which ultimately adds to your cost. Opting for the standard GT and adding the GT Performance Package ($3,995) brings your price to about $39,000, with the current $1,500 cash incentive taken.

You won’t have all the creature comforts of the GT Premium, including leather seats, but you’ll still enjoy the potency and handling attributes for a reasonable price. 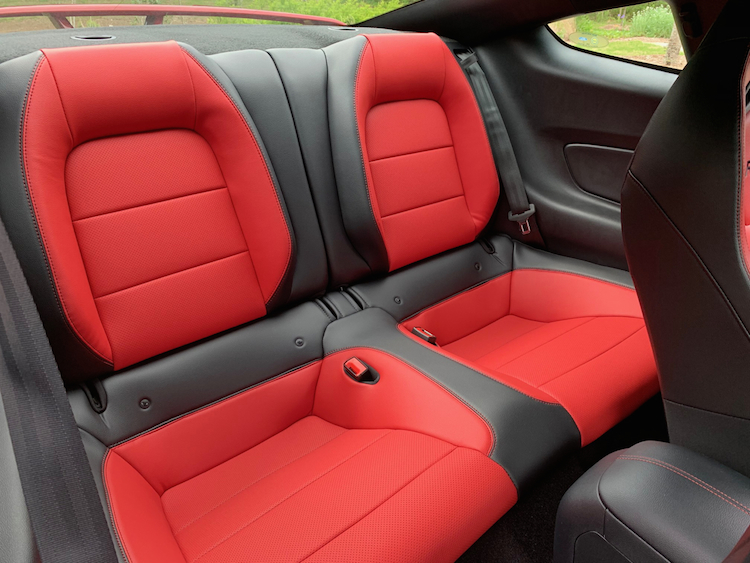 See Also – Charmed, Then Snakebitten by a Shelby GT350