What’s old or time-honored is new again. The 2020 Ford Explorer is the latest version of Ford’s most popular SUV, an all-new model that builds on the success of the 8 million copies sold to date.

This week, at Ford Field in Detroit, Ford officially unveiled its next-generation Explorer, with thousands of Ford employees, industry leaders, community officials and a press pool in attendance.

Arriving in summer 2019, the 2020 Explorer sits on an all-new platform and features a more rigid body and updated turbocharged engine choices. This SUV’s debut occurs just days ahead of the official start of the North American International Auto Show, the final time it will be held during the winter. Starting in 2020, the Detroit auto show switches to a June format.

Highlights of the 2020 Ford Explorer

1. Supported by a new rear-wheel-drive platform. Most utility vehicles sit on a front-wheel-drive platform, with optional four-wheel drive. That’s been the case with the 2011-2019 Ford Explorer, which switched from its previous truck-based architecture to unibody construction. The 2020 Explorer still features a unibody design, but this time Ford offers standard rear-wheel drive with available four-wheel drive. Ford is following Land Rover and the Jeep Grand Cherokee in that department, hoping to capitalize on its more athletic appearance and increased capability to set it apart in a highly competitive segment. 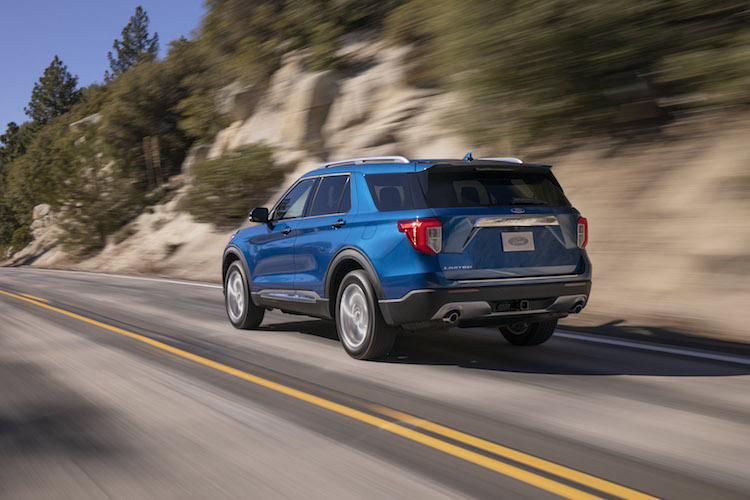 2. Enhanced by up to seven selectable drive modes. Ford’s available Terrain Management System, found on all models, features as many as seven drive modes for the choosing. All rear-wheel-drive models come with normal, sport, trail, slippery, tow/haul, and eco settings. Models equipped with four-wheel drive add deep snow and sand modes, with each designed for improved off-road performance.

3. Powered by one of two engine choices. Ford will offer a pair of engine choices with its new model. Gone is the previous 3.5-liter V6, which was offered in naturally aspirated and twin-turbocharged versions. The new engines are both turbocharged and they sport the company’s internal “EcoBoost” label. Standard with all trims, except the top-trim Platinum is a turbocharged 2.3-liter engine, which Ford expects will deliver 300 horsepower and 310 pound-feet of torque. Those numbers match what some V6 engines deliver. New to the Explorer line is a twin-turbocharged 3.0-liter V6 engine. When fueled with premium gasoline, this one will deliver 365 horsepower and 380 pound-feet of torque. Both engines work with a 10-speed automatic transmission.

4. Improved towing capabilities present. Towing and utility vehicles go hand in glove. The previous base engine with trailer package was capped out at 3,000 pounds, but now can tow up to 5,300 pounds. As for the V6, its towing capacity was raised by 600 pounds to 5,600 pounds, which is ahead of most competitors.

5. Designed with families in mind. As you might guess, utility vehicles are popular with families. The 2020 Explorer features several changes with youngsters in mind, including a tougher center console design, which now handles more weight — in the event children decide to climb on it. Other improvements include square cup-holders for juice boxes, increased overall storage space, and a reversible rear cargo floor with rubber covering one side — ideal for holding cleats after sports practice and for cleaning later. Ford says the second row has more head and hip room. The second-row seat also includes a mechanism for ease of access to the third row — just one hand is needed to flip the seat forward. 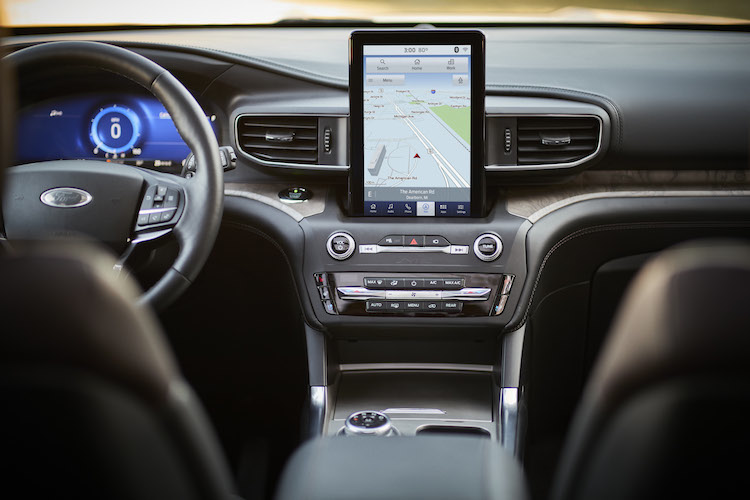 6. Refined safety technologies at your disposal. No utility vehicle or any new model for that matter is lacking in technology offerings. We expect them. No, we demand them! The 2020 Explorer doesn’t disappoint, as it comes with a suite of driver-assist technologies under the Ford Co-Pilot360 umbrella. These include: pre-collision assist with automatic emergency braking, pedestrian detection, forward collision warning, and dynamic brake support. You’ll also find a blind-spot information system with cross-traffic alert, a lane-keeping system, a rearview camera with a built-in lens cleaner, and automatic headlamps with automatic high beams.

7. Advanced audio and other technologies. All Explorer models have SYNC3, which is Ford’s most advanced tech interface. This system includes Apple CarPlay and Google Android Auto smartphone capabilities and Waze navigation. Also available is a 12.3-inch all-digital instrument cluster and an available 14-speaker, 980-watt B&O premium audio system. Other features include 4G LTE Wi-Fi for connecting up to 10 devices with an available wireless subscription, a wireless charging pad, four USB ports, three 12-volt outlets, and a 110-volt power outlet.

Ford says that the 2020 Explorer will start at $33,860. It will come in XLT, Limited, ST and Platinum trims. A hybrid version will follow. Other pricing information and product details will roll out ahead of this model’s release date. Like the current model, the new Explorer will be built at the Chicago Assembly Plant in Illinois.