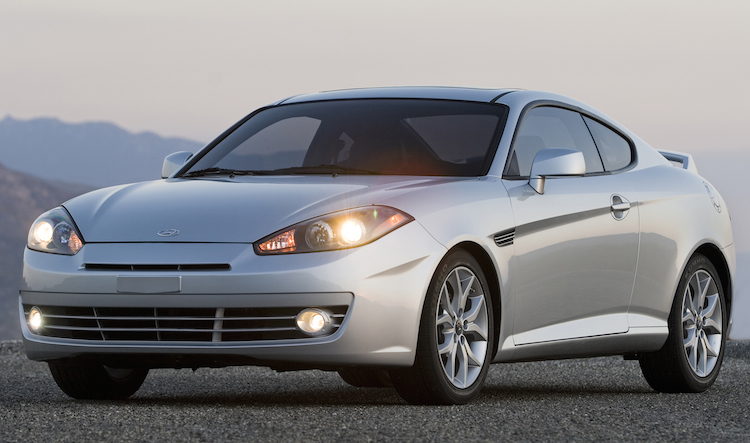 The Hyundai Tiburon represents one of this Korean automaker’s earliest forays into the sport coupe segment. It was produced from 1997 to 2008, replacing the earlier Scoupe before it was succeeded by the Hyundai Veloster and later the Genesis Coupe. The Hyundai Tiburon is a favorite car for the tuner set, people who like to customize their vehicles with engine swaps and aftermarket car parts. The Tiburon may also be a very good used car value if you are shopping for an affordable, front-wheel-drive car.

Tiburon is an island in the Gulf of California, located just off the coast of Sonora, Mexico. It is a Spanish word for shark, the name that Hyundai chose for its second attempt at a sport coupe model in the 1990s.

When the Hyundai Tiburon made its debut, two engines were offered. The base model comes equipped with a 1.8-liter four-cylinder engine rated at 130 horsepower at 6,000 rpm and making 122 foot-pounds of torque at 5,000 rpm. It’s paired with a five-speed manual transmission.

The base engine was dropped after the first year with the larger four standard across the model line through 2001.

Taking inspiration from the HCD II concept that made its debut at the 1993 Chicago Auto Show, the first-generation Hyundai Tiburon features a sport fascia, sculptured hood, strong shoulders, and sport coupe body lines. Base models have 14-inch wheels and tinted glass. Options include a rear spoiler, fog lights, alloy wheels, and keyless entry — standard features on the Tiburon FX.

Inside, the first-generation Hyundai Tiburon has 2+3 seating, with bucket seats up front and a fold-down bench seat in the back. Standard features include cloth seating, a tilt steering wheel, power windows and door locks, power side mirrors, an AM/FM cassette audio system, and power steering.

Beginning in 2003, the second-generation Hyundai Tiburon became available. Base and GT editions were sold initially with the model line further divided into GS, GT, SE and Limited editions before it was canceled following the 2008 model year.

The standard engine is a 2.0-liter four-cylinder rated at 138 horsepower at 6,000 rpm and 136 foot-pounds of torque at 4,500 rpm. A five-speed manual or a four-speed automatic are the transmission choices.

A 2.7-liter V-6 is the upgraded engine, rated at 172 horsepower at 6,000 rpm and 181 foot-pounds of torque at 3,800 rpm. This engine works with either a five- or six-speed manual transmission or with a four-speed automatic transmission.

Fresh sheetmetal and a sportier look define the second-generation Hyundai Tiburon. That model has a more sophisticated looking front air dam, flared headlamps and improved sporty design characteristics on its profile and along the rocker panels. For the first time, a rear spoiler is standard and all models come outfitted with either 16- or 17-inch alloy wheels.

Years after the Hyundai Tiburon was last available new, it offers value to used car shoppers. Pricing differences between four- and six-cylinder models should be noted, with equipment options offering further cost separation. Among the competing models of that era were the Chevrolet Cobalt SS, Scion tC, and the Mitsubishi Eclipse.

2 thoughts on “The History of the Hyundai Tiburon”