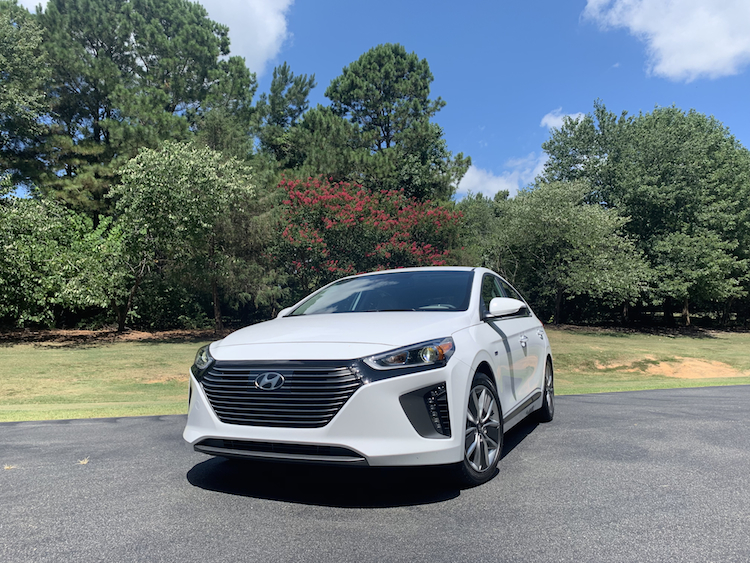 We’ve passed the tipping point where crossovers and similar people movers are outselling cars across the United States. Truly, the majority of customers shopping for a new vehicle prefers a utility vehicle or pickup truck to the coupes, sedans, and wagons that once represented the car market.

An important sub-set of the market are hybrid electric vehicles, popularized by the Toyota Prius, but also offered by a variety of manufacturers, including Hyundai. Indeed, Hyundai has been producing hybrid vehicles about as long as have Toyota and Honda, but it wasn’t until 2011 that the first Sonata Hybrid rolled out stateside.

Today, Hyundai has a lot more to show for it than its midsize Sonata Hybrid. Beginning in 2017, the automaker released its Ioniq line of electrified vehicles, which now includes hybrid, plug-in hybrid, and electric variants. Auto Trends has tested two: the standard hybrid and the electric variant, the latter just briefly at a Hyundai media event in 2017.

The Ioniq line takes aim at the Toyota Prius, which is comprised of standard and plug-in hybrid electric vehicles. Toyota doesn’t have an all-electric Prius, although it does offer a fuel-cell Mirai, which competes with the Hyundai Nexo fuel-cell electric vehicle.

As for this review, our model is the 2019 Hyundai Ioniq Hybrid Limited. The Ioniq is a compact sedan, whose nearest competitor beyond the Prius is the all-new 2020 Toyota Corolla Hybrid. Here are the highlights of the 2019 Hyundai Ioniq Hybrid:

Hyundai could have offered the Ioniq Hybrid in one trim, just like the Corolla Hybrid. Instead, you’ll find three trims: Blue, SEL, and Limited.

The Blue trim is the most efficient of the three (more about that later) and comes with standard automatic headlights, door handle approach lights, and 15-inch wheels. Other standard features include keyless entry with push-button start, a tilt-and-telescopic steering column, climate control, cloth seats, and a split-fold-down rear bench seat. Further, you’ll find full power accessories, an audio package with a 7-inch color display, and smartphone compatibility with Android Auto and Apple CarPlay included. This is no strip model as you can deduce. 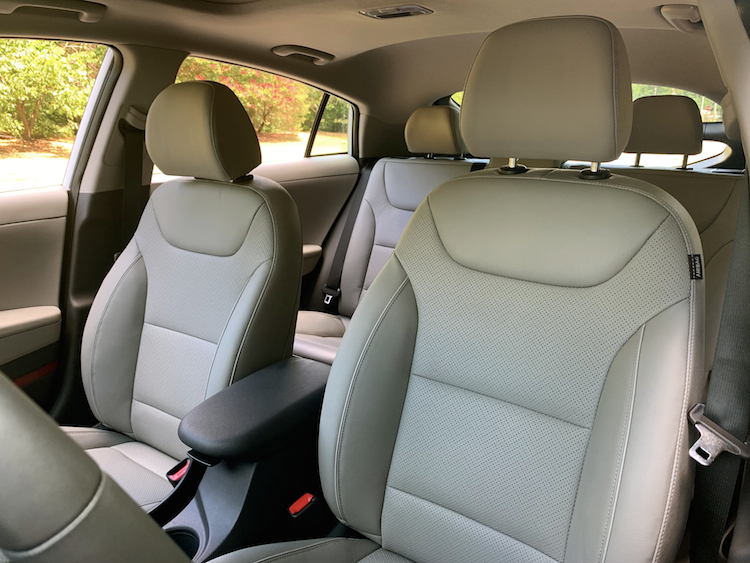 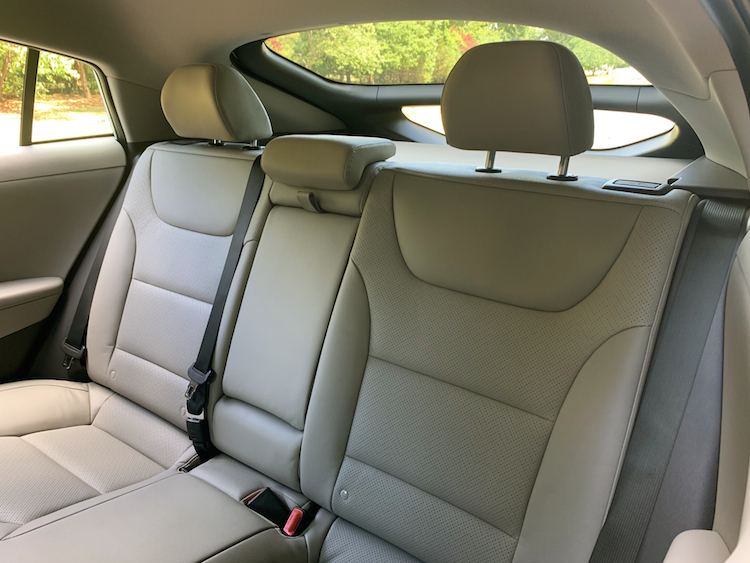 The SEL trim is likely where most shoppers will start their search. This one adds heated front seats and a power-adjustable driver’s seat with adjustable lumbar support. You’ll also find such safety features as adaptive cruise control, automatic emergency braking with pedestrian detection, blind-spot detection with rear cross-traffic alert, and lane-keep assist. Lastly, Hyundai adds a 7-inch LCD for the instrument panel.

At the top of the range is the Limited, which quite frankly brings in many premium features and offers the lone package option. Here, you’ll find high-definition headlights with LED accent lighting, automatic high beams, 17-inch alloy wheels, a power tilt-and-slide sunroof, and Hyundai Blue Link connectivity services.

The Ioniq and Hyundai Elantra share a common platform. In fact, both models measure 106.3 inches long between the wheels. If you’re comparing hatchbacks, the Ioniq and Elantra GT are just $1,700 apart. 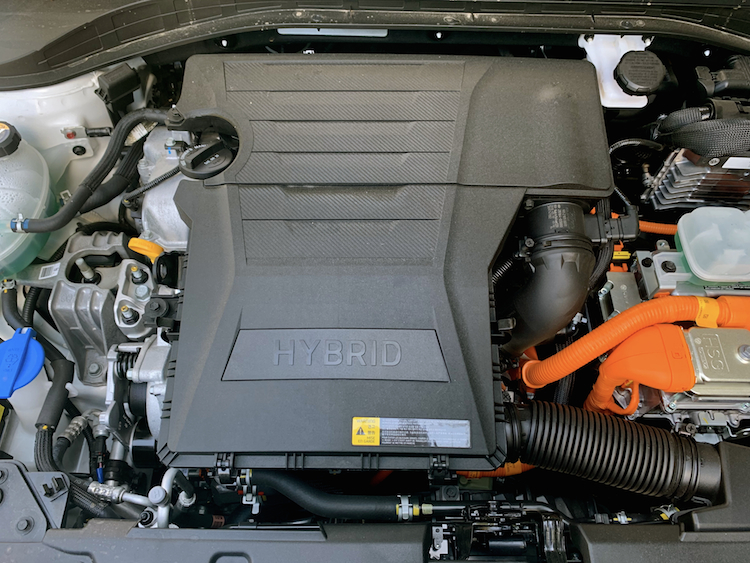 How long will it take to recoup the extra cost of the Ioniq Hybrid over the Elantra sedan? About 8.35 years ($3,450 divided by $412.98). You’ll see a shorter recoupment period with the Elantra GT although it isn’t as efficient as the sedan. 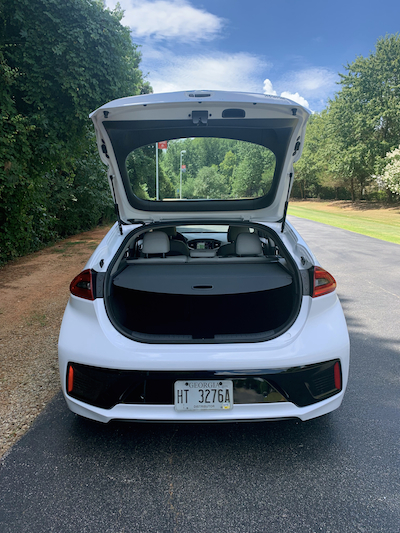 These numbers are incredible and come in slightly higher than the standard-bearing Toyota Prius and its top 56 mpg rating. But what’s achieved on paper is often different in real life. Factors such as weather conditions and driving habits must be considered. Indeed, at least some of my drive time took place with the mercury approaching 100 degrees Fahrenheit. Optimum conditions for a hybrid are generally in the 70s. Cold weather can impact fuel economy too.

Like other hybrids, the Ioniq prominently posts fuel economy information on the instrument panel to get you to drive conservatively. As with every hybrid I drive, I routinely ease up on the gas pedal and ease down on the brake pedal to maximize efficiency.

The Hyundai Ioniq is motivated by a 104-horsepower gas engine with an electric motor adding its own power as needed. Under full throttle, the Ioniq delivers a combined 139 horsepower and that’s close to the 147 horsepower of the Elantra.

Also when operating under full throttle, the Ioniq demonstrates that it isn’t merely an economy car. It isn’t especially fast, but it’ll get you down a freeway entrance ramp with confidence. Steering is light and sufficiently weighted; handling is competent. This car delivers braking with only a minimal amount of squishiness was noticed.

Unlike some competing models, Hyundai eschews a continuously variable transmission, choosing a six-speed dual-clutch automatic to route power to the front wheels. The transmission shifts smoothly while also keeping engine noise from whining. 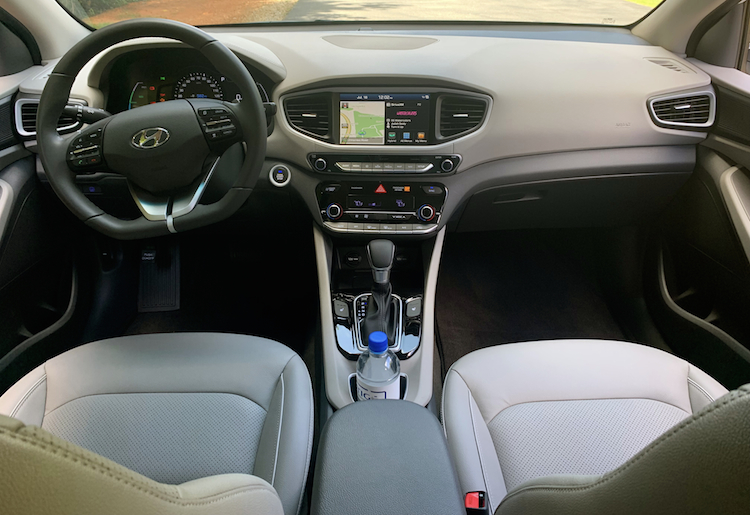 As long as fuel prices remain relatively low (below $3 per gallon), hybrid electric vehicles remain a tough sell. But if you’re looking to conserve fuel and do your part to limit emissions, then a hybrid makes sense. Importantly, range anxiety isn’t a concern as it is with pure electric models.

Hyundai may not have the hybrid recognition of Toyota, but it is a factor in the market. Importantly, its Ioniq line gives customers a variety of options not matched by any other model. Keep in mind that the Ioniq Electric is available in select states: California, Connecticut, Maine, Maryland, Massachusetts, New Jersey, New York, Oregon, Rhode Island, and Vermont, while the other two models are available everywhere Hyundai dealers are found. 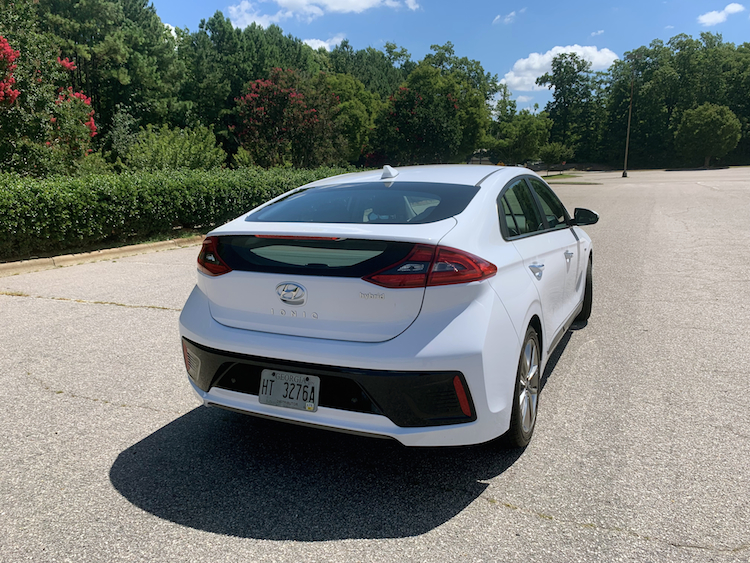