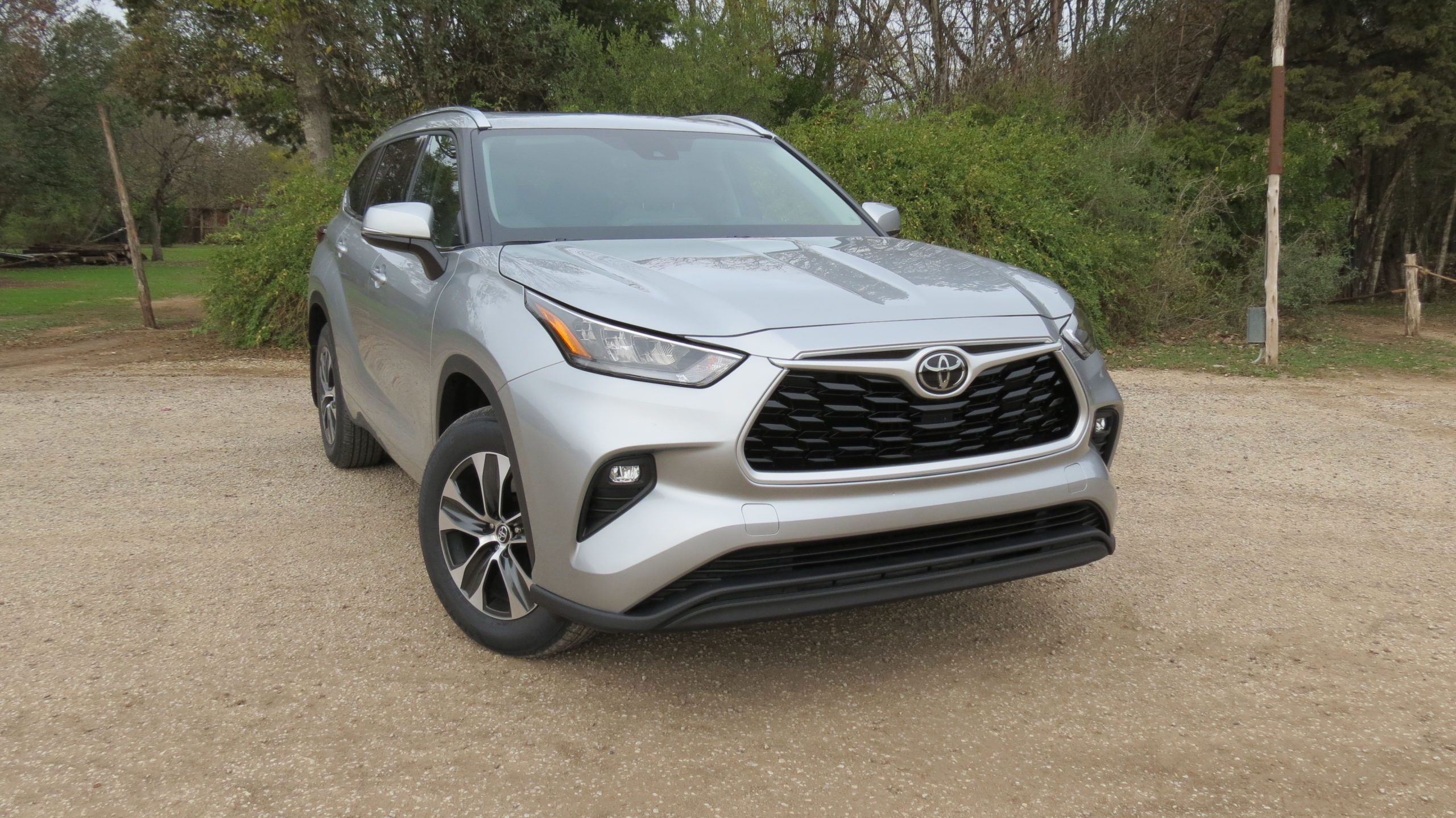 We, consumers, are enamored by crossover utility vehicles, which have largely replaced sedans and minivans as the family vehicle of choice. Big on passenger space and cargo room, crossover SUVs have simply won us over.

In the midsize sector, there are some two dozen models to consider, with three-seat models outnumbering two-seat versions by a 2-to-1 margin. Toyota is well represented in the sector by the Highlander, a three-row crossover that rolled out in 2001. In fact, the Highlander effectively overhauled the segment, which was dominated at the time by a few truck-based models, including the Ford Explorer and Dodge Durango. Utilizing a car-based platform has worked wonders for Toyota and others as it affords owners with more interior room, better handling, and optimum fuel economy.

With the Highlander, Toyota has vigorously carved out a significant slice in the segment and remains one of the best-selling models and for good reason. The Highlander represents attractive styling, efficient powertrains, and generous advanced technologies.

This month, a fully redesigned 2020 Highlander debuts, followed by a Highlander Hybrid in February. Toyota invited this writer to San Antonio to test-drive various Highlander versions, covering my airfare, the hotel stays, and food, for this event. My comments are based on an initial preview; hence these are first impressions only. That said, there was enough time allowed to gain an appreciation for what consumers will soon experience first-hand.

First things first: the 2020 Highlander is available in L, LE, XLE, Limited, and Platinum trims. The Highlander Hybrid has four trims, beginning with the LE. Pricing starts at $34,600 for the base L front-wheel-drive model and reaches $48,000 for the Platinum all-wheel drive. The hybrid model now includes front-wheel drive; each corresponding trim costs $1,400 more than its gas version. Prices do not include the mandatory $1,120 freight charge, nor are taxes, tags, and related closing expenses added until later.

The latest Highlander is slightly larger than the outgoing model, with an additional two inches between the wheels. All that extra space is for cargo room, which enables the Highlander to compete more effectively in the segment. The new model is also built on Toyota’s global architecture, which means it shares its underpinnings with the Camry and Avalon sedans as well as smaller crossovers, including the RAV4 and C-HR. It’s a cost-saving move that allows Toyota to share many of the expenses in vehicle development across its model line. 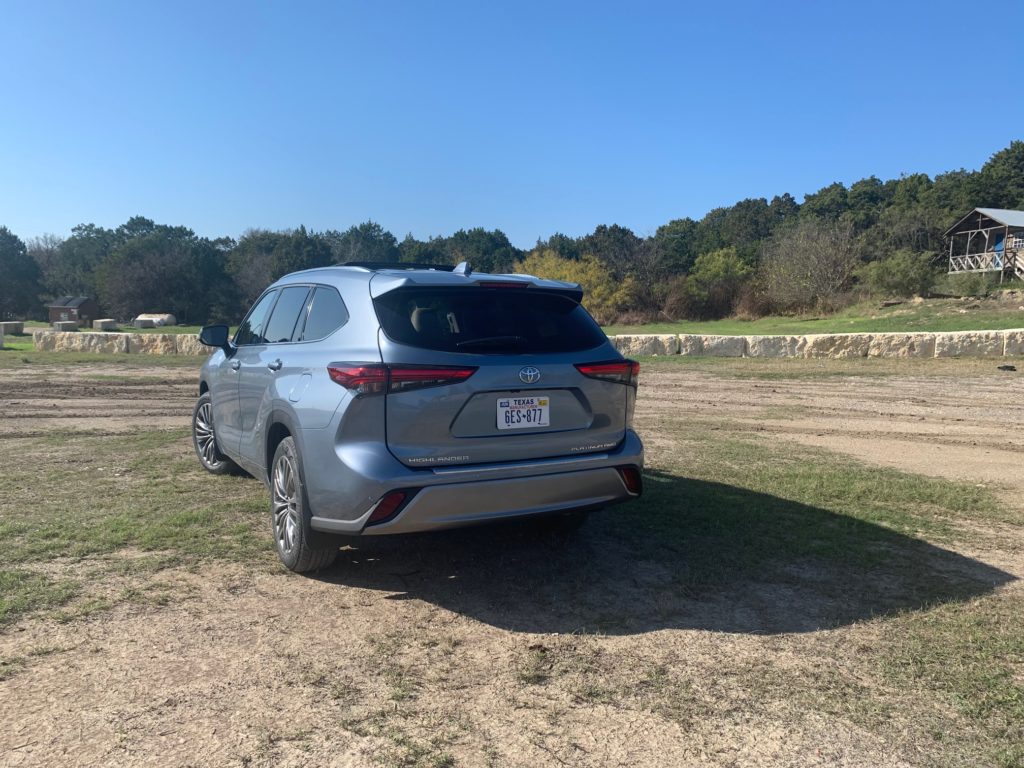 As before, Toyota offers a 3.5-liter V6 gas engine that develops 295 horsepower and 263 pound-feet of torque. This engine works with an 8-speed automatic transmission and features automatic stop/start technology. Choose this powertrain and you’ll enjoy a 5,000-pound towing capacity, which is just ahead of the GMC Acadia (4,000 pounds), but behind the Nissan Pathfinder (6,000 pounds).

Since 2006, Toyota has offered a hybrid variant of the Highlander, the only model in the segment with gas-electric technology. Although that’s changing as Ford, Dodge, and others enter with their own choices, the Highlander Hybrid has once again upped its game.

Where the gas engine is unchanged with the 2020 Highlander, the hybrid powertrain is stronger and more efficient than before. The current version bangs out a combined 243 horsepower with its 2.5-liter gas engine and electric motors, which is 82 percent of the performance of the V6 engine. Power travels to the front or all four wheels by means of a continuously variable automatic transmission with a pair of electric motors also at work.

Where V6 fuel economy improves by 1 mpg since 2019, the Highlander Hybrid boasts a 24-percent increase in efficiency. Indeed, the EPA rating is a combined 36 mpg, which is outstanding. In our various test drives we averaged as high as 33.9 mpg, which is about 5 mpg more than what the previous model offered. Keep this model’s efficiency in mind when considering the Highlander. Oh, before we move on, the hybrid has a 3,500-pound towing capacity, which matches the V6-powered Honda Pilot.

One look at the new Highlander and the design changes are easily to identify. Up front you’ll find a black gaping grille, surrounded by chrome on the Limited and Platinum trims. The two top trims add chrome embellishments on the lower fascia too.

Other noticeable changes include relocated side mirrors and a more robust, even truck-like hood line. Sculpted panels, pronounced body lines, and new wheel designs are apparent. From the rear, all models now include standard LED lights. Toyota says the liftgate is lighter and opens and closes faster. 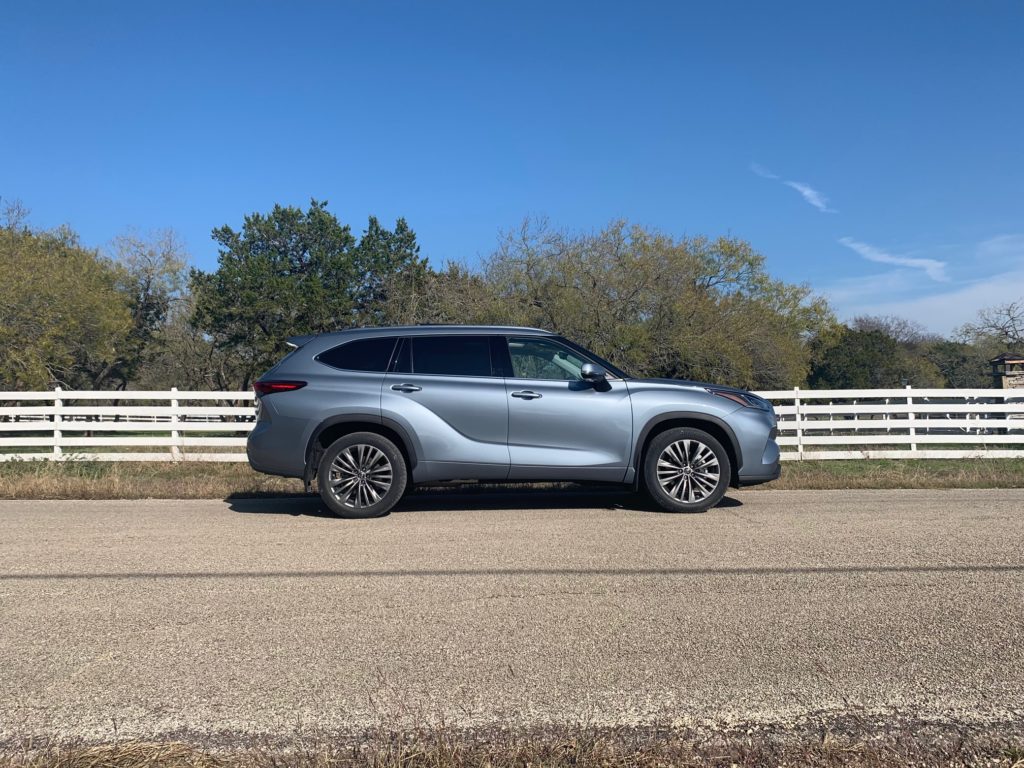 Space for Seven or Eight

Inside, Toyota supplies seating for seven or eight, depending on the trim. In models equipped with eight seats (L and LE), the second row is a bench seat, which is instead of the captain’s chairs in the other three trims. Both seats move forward and fold flat, enabling improved ease of access/egress to/from the third row. Yet, the third-row space is still quite small.

The Volkswagen Atlas supplies the best-in-class legroom and can hold full-size adults in comfort.

As for the rest of interior, the space is otherwise open, with clean lines, soft-touch materials, and ambient lighting present. Plastic is utilized too, mostly below eye level and in out-of-the-way places.

The dashboard is a conversation starter with its large chrome-like surround with a thick bar jutting out from the right side of the panel and splitting the upper and lower sections. For better or for worse, it draws a lot of attention to the center console, which has a standard 8-inch screen. On the top-trim Platinum, you’ll find a 12.3-inch screen, the largest in the segment. The only thing we’d like for Toyota to work on is removing glare – there are times when the screen is difficult to read. As for fingerprint buildup, expect to wipe down the screen as you do your smartphone or tablet. You do wipe these screens, right?

The front seats are supportive, although an inch or two of additional thigh support would be welcome. On some trims the driver seat adjusts up and down and supplies lumbar support, but not so with the passenger seat. That’s a deficiency we don’t expect in a crossover costing $40,000 or more.

We give Toyota credit with supplying ample storage compartments in the doors, the center console, and in the rear compartment. Oddly, Toyota sticks the Qi-compatible charger in the armrest/storage compartment, where it is difficult to reach (or remember when taking a long drive). Making space at the bottom of the stack seems like a much more sensible approach.

We’ve already touched on some of the tech features, especially as it relates to interior design. But there is much more to report, including now standard Apple Car Play, Android Auto, and Alexa In-Car compatibility. Toyota also includes Waze, SiriusXM, and Wi-Fi connectivity.

Where a six-speaker audio system is standard; Toyota once again turns to JBL to supply an enhanced audio experience with an 11-speaker arrangement. That system represents 1,100 watts of power coursing through the cabin. If you want navigation, it appears with the Limited trim, although your smartphone app should be enough. 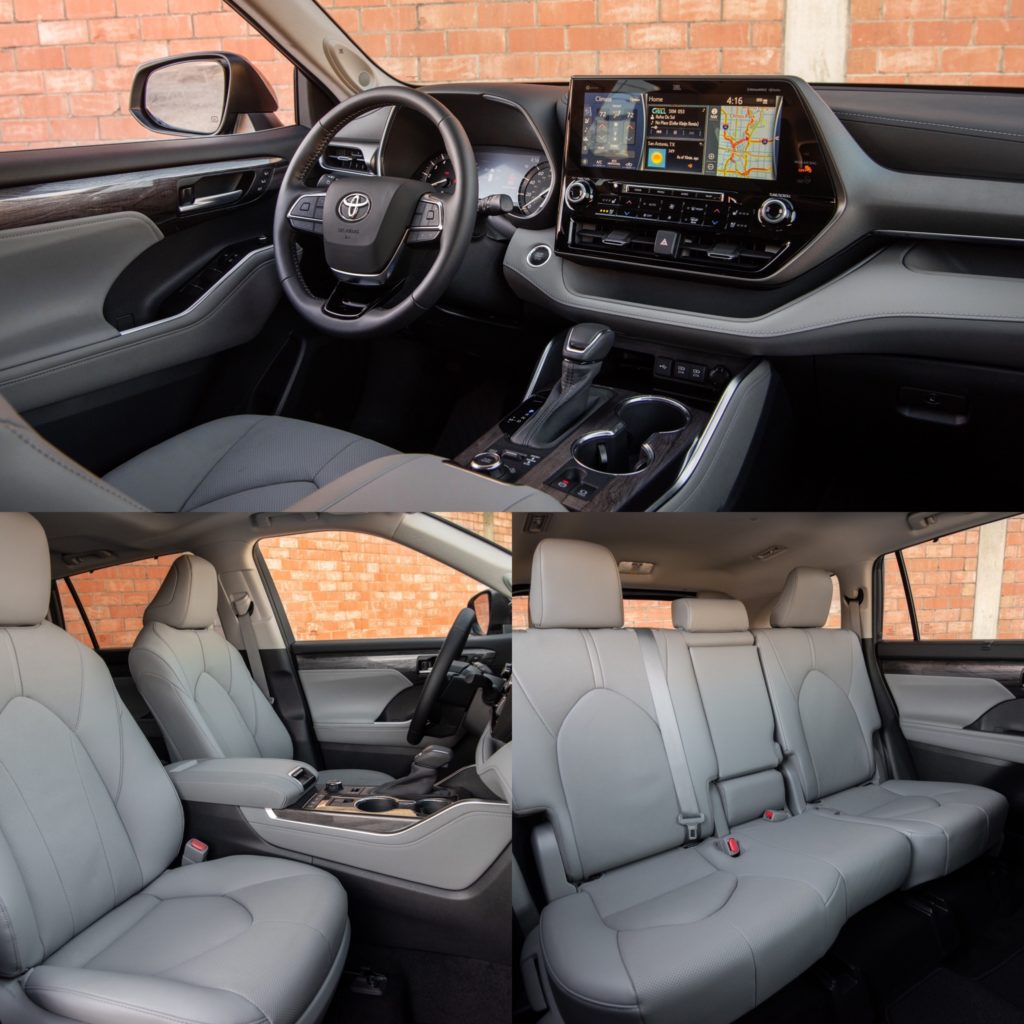 You’ll also find blind-spot monitoring and rear cross-traffic alert standard on the LE trim and above. Rear cross traffic braking is available with clearance sonar on the Limited and above. All in all, Toyota battles well in tech features and excels in all things safety.

So, which powertrain should you choose? The hybrid is a stronger contender than before, thanks to its improved performance and efficiency. That said, we quickly discovered that the added weight of the hybrid powertrain and available all-wheel drive mean that it isn’t as nimble as it could be.

Step-off acceleration and passing power in the gas model is robust, with a willing transmission finding the right cog for the occasion. The steering is adequately weighted, and this SUV’s handling is what you’d expect: it simply gets the job done. When driving the hybrid, you can feel the system straining under hard acceleration, which is no surprise for a vehicle designed to maximize efficiency. We think, however, that under full load, the hybrid will have to work extra hard to keep up. That’s a by-product of using a four-cylinder engine and electric motors to power this vehicle – its optimized for efficiency, not performance.

In all, we were impressed with the Highlander’s smooth ride and relatively quiet interior. In some ways, though, the Kia Telluride and Hyundai Palisade are more comfortable, although we give the Toyota’s engine the edge in this department. We’ll be better positioned to gauge these differences once we have a production-ready Highlander to test for a week.

The all-new Highlander should gladden the hearts of Toyota faithful and win a few converts along the way, including anyone interested in a hybrid. As for a potential plug-in hybrid to take on the Ford Explorer, Toyota is mum there.

As for the competition, consumers have more choices than before and they’ll look hard at the offerings. Toyota delivers the quality, efficiency and reputation you’d expect, but falls behind in third-row seating which could cost it some sales. For most shoppers, however, the third row is for children and if that’s the case for you, then the Highlander should meet or even exceed your expectations.