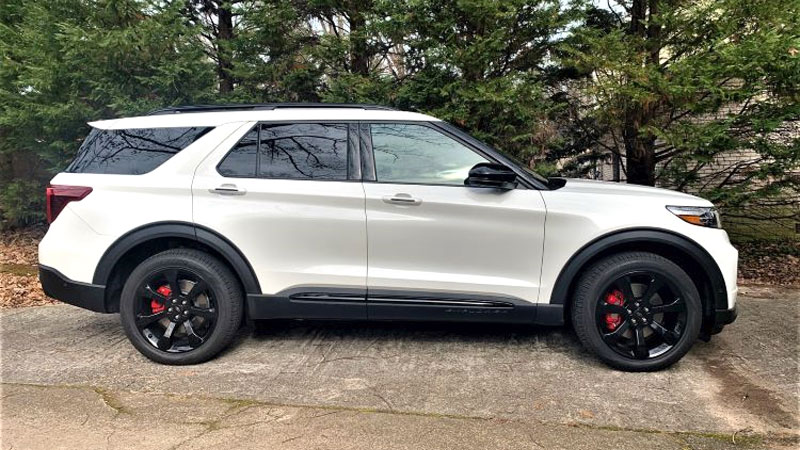 The Ford Explorer is one of the early names that sparked the modern sport utility vehicle revolution, a 1991 model year replacement for the Bronco II. Since its inception, it’s been a proven seller, a midsize SUV that’s now in its sixth generation.

Beginning in 2020, the Explorer returned to its roots, at least in one important way. After switching to a front-wheel-drive platform beginning with the fifth-generation model in 2011, the sixth-generation Explorer once again features standard rear-wheel drive.

The main difference, though, between the current model and those from 2010 and earlier, is this one features unibody construction for improved body rigidity (which makes for a quieter and smoother ride and better handling).

On the other hand, the first four generations offered a classic body-on-frame build, which remains common to trucks to this day. 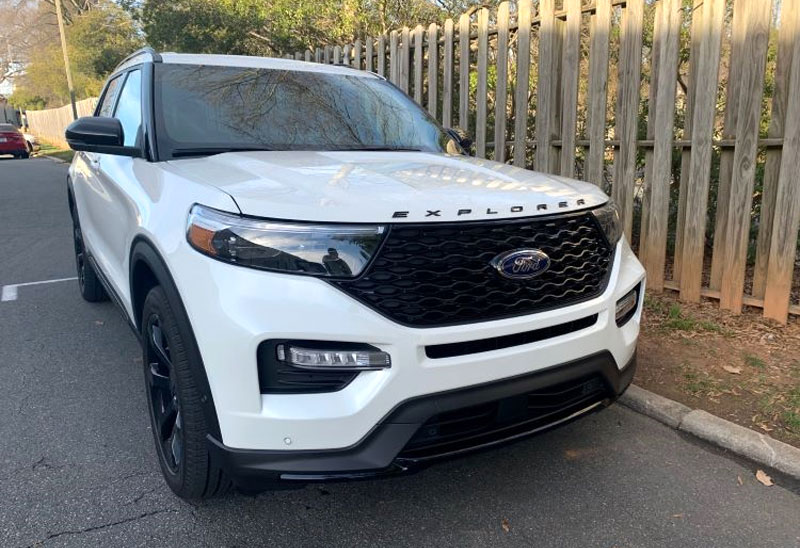 As a three-row midsize model, the 2020 Ford Explorer makes room for up to seven passengers. Like most other models in this segment, though, the third row is most useful for children. Adult passengers can squeeze in, but the space (including legroom) is much more limited than it is in the first two rows. One exception in this segment is the Volkswagen Atlas.

Quite easily, you’ll pay at least $40,000 for an Explorer before outfitting one to your personal specifications.

And what about the previous “base” Explorer model? It is still available, but to fleets only. It starts about $4,000 less than the XLT, but is essentially a bare-bones model with space for seven.

The all-new Explorer has a more truck-like persona this time around, with pronounced edges, a bold grille, and upright roof pillars. Its size is nearly the same as before, but with one important difference: there is an additional seven inches between the axles.

Inside, only the base model offers seven-passenger seating. Most trims supply room for six as the middle-row bench seat is replaced by a pair of captain’s chairs. Interestingly, this is the same arrangement offered by the now retired Ford Flex, the quirky wagon-like utility vehicle that existed throughout the previous-generation Explorer’s build span.

The dashboard is layered, offering an upscale vibe with chrome-like trim separating the sections. That style also runs across the doors. Lots of useful pockets and storage compartments dot the interior. The available panoramic roof simply brightens the cabin.

We found the front seats very comfortable and generously bolstered. The leathering is handsome and sporty. Available features such as heated and ventilated front seats with massaging give the Explorer a class-above feel, not unlike the Kia Telluride and Hyundai Palisade.

Make your way up through the various trims and package offerings, and the Explorer adds chrome-like garnishment, full LED lighting, power-controlled side mirrors with heating, larger and more elegant or sporty wheels, and a roof rack.

Among the upgrades included are heated captain’s chairs, a leather interior, second-row sun-blinds, and a power-fold third-row seat.

Our test model for the week was the Explorer ST. This four-wheel-drive model comes well equipped, although there are a few upgrades of note. First, a Performance Package ($1,705) adds such features as 21-inch aluminum wheels, red painted brake calipers, and high-performance brakes.

This year, Ford adds the first hybrid variant to the Explorer line. We’ll touch on that model in a bit, but first we’ll review the two engine choices available with the standard Explorer.

The Explorer Hybrid, arriving this spring, comes with a naturally aspirated 3.3-liter V6 engine, electric motors, and a hybrid battery pack. This one delivers a 318 horsepower and 322 pound-feet of torque.

Like the two other engines, this engine works with a smooth-shifting 10-speed automatic transmission. Yes, the Explorer Hybrid will be available in standard rear-wheel drive or available all-wheel drive.

When it comes to trailering, the 2020 Explorer gets it done when properly equipped. Models equipped with the standard engine pull up to 3,500 pounds, which equals the Honda Pilot.

The ST and Platinum are rated to pull 5,600 pounds, which is better than the GMC Acadia, although just short of the Nissan Pathfinder. Even the Explorer ST offers robust towing capabilities as it is rated up to 5,000 pounds.

The Explorer ST demonstrates its performance bona fides straight out of the gate. Its throaty exhaust system booms and continues to percolate while driving. Step-off acceleration is excellent, but so is the passing power. This SUV is fast, although not as quick as the slightly smaller and lighter Jeep Grand Cherokee SRT we drove a few years ago.

Nevertheless, the Explorer ST does what you’d expect from any vehicle modified by Ford Performance. Direct and weighted steering, responsive handling, and firm braking are its strengths.

On twisty roads, you’ll feel the body roll as you navigate each turn – there is no way to engineer out that feeling of a high-profile vehicle, though its beefy tires keep this SUV planted. Slam on the brakes and the Explorer ST comes to a quick and confidence-building stop.

The ST’s performance attributes include steering-wheel-mounted paddle shifters and the available terrain management system. The rear-wheel-drive model has its own set of drive modes, while the four-wheel-drive ST supplies seven.

These are: normal, eco, slippery, sport, tow/haul, trail, and deep snow/sand. On rear-wheel-drive models, switches control the settings, while a dial manages the same for all-wheel drive. Your selected drive mode appears on the instrument panel display.

How fast is the Explorer ST? Ford says it has a 0-60 mph time of just 5.5 seconds. That’s outstanding for this class vehicle. Ford also says that up to 100 percent of the power can shift to the rear wheels, otherwise, the system maintains a near 50:50 front-to-rear torque split.

We considered taking the Explorer ST to a regional four-wheel driving “course” as the trails in Uwharrie National Forest are closed for the winter. But with its handsome and costly performance upgrades, we reconsidered, limiting most of drive time to the open road.

That’s where the majority of Explorer drivers will go, with most off-road venturing limited to gravel roads and well-worn trails. If you’re looking for an off-road beast from Ford that isn’t a pickup truck, hold on: the 2021 Bronco will fulfill that need. The Bronco is Ford’s answer to the Jeep Wrangler.

Ford does a good job with technologies, including a long list of standard and available driver-assist features. All models come with automatic headlamps with high beam control, a blind-spot information system with cross-traffic alert, a lane-keeping system, and a pre-collision system with automatic emergency braking.

We can also laud Ford for its in-cabin tech, including an 8-inch touch-screen display and 6.5-inch instrument panel display. The standard features include a six-speaker audio system with satellite radio, multiple powerpoints and USB ports, Apple CarPlay and Android Auto smartphone compatibility, and a Wi-Fi hotspot.

Ford also offers many upgrades, including some that are trim specific, while others are bundled within available packages. On some trims you’ll find a 12-speaker B&O audio system from Bang & Olufsen, WAZE navigation compatibility, and wireless charging.

The all-new 2020 Ford Explorer represents a nice step forward for this venerable nameplate. We’re happy Ford returned to its rear-wheel-drive roots, a move that improves handling and the driving experience. The ST is an example of where Ford Performance is heading as it moves away from cars to trucks and utility vehicles. Yes, a crossover utility vehicle can be fun to drive!

Competition in this segment is fierce, as every major manufacturer offers at least one model. On the top end, pricing pushes past $60,000, easily within the range of luxury models.

We’ve driven the similar Lincoln Aviator, which pulls out all the luxury stops with a high price to go with it. You can’t buy a base Explorer anymore, unless you’re a fleet owner. Thus, expect a well-equipped model to cost you at least $50,000.