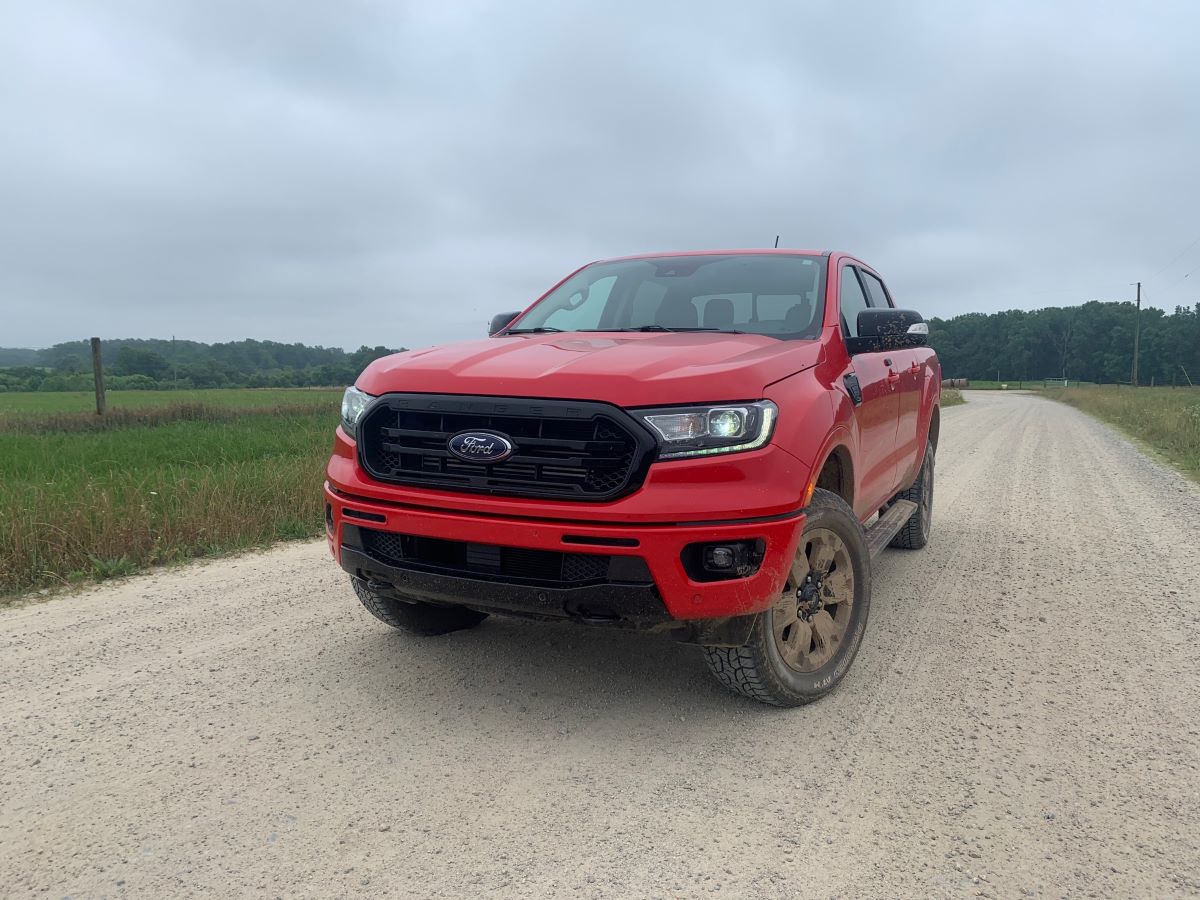 The Ford Ranger is back, giving the blue oval brand a midsize complement to the full-size and segment-leading F-150. The latest version rolled out in 2019, ending an 8-year hiatus. The current Ranger is the largest we’ve seen thus far and is no longer available in a regular cab configuration. Instead, buyers have a choice of extended (SuperCab) and CrewCab layouts.

Now in its second year, the fourth-generation 2020 Ranger features light changes to the equipment offerings. An FX2 package is new this year.

Forget everything you think about the Ranger when examining the current model. This one is larger in every way, with a footprint that’s about 90 percent the size of the full-size F-150. The original truck was truly a compact, then grew slightly later. Even so, it was always smaller than the competition, but that doesn’t mean it was any less of a truck.

We like the look of the Ranger, from its high beltline to its sleek design. It goes beyond the slab-side design common to all pickup trucks, adding curves and substance along the way. Importantly, the Ranger is not an F-150 derivative – it’s based on its dedicated ladder-frame and has a distinctive look.

There are a pair of packages worth considering and they’re available on all three trims: FX2 (for two-wheel drive) and FX4 (for four-wheel drive). Both build on the STX Package (including halogen fog lamps, upgraded wheels, and tow hooks). The FX2 brings in an off-road-tuned suspension system, an electronic-locking rear differential, off-road tires, special decals, and an upgraded instrument panel. The FX4 builds on this, adding underbody protection, including a steel bash plate, skid plates for the fuel tank, transfer case, and steering gear, and a terrain management system. 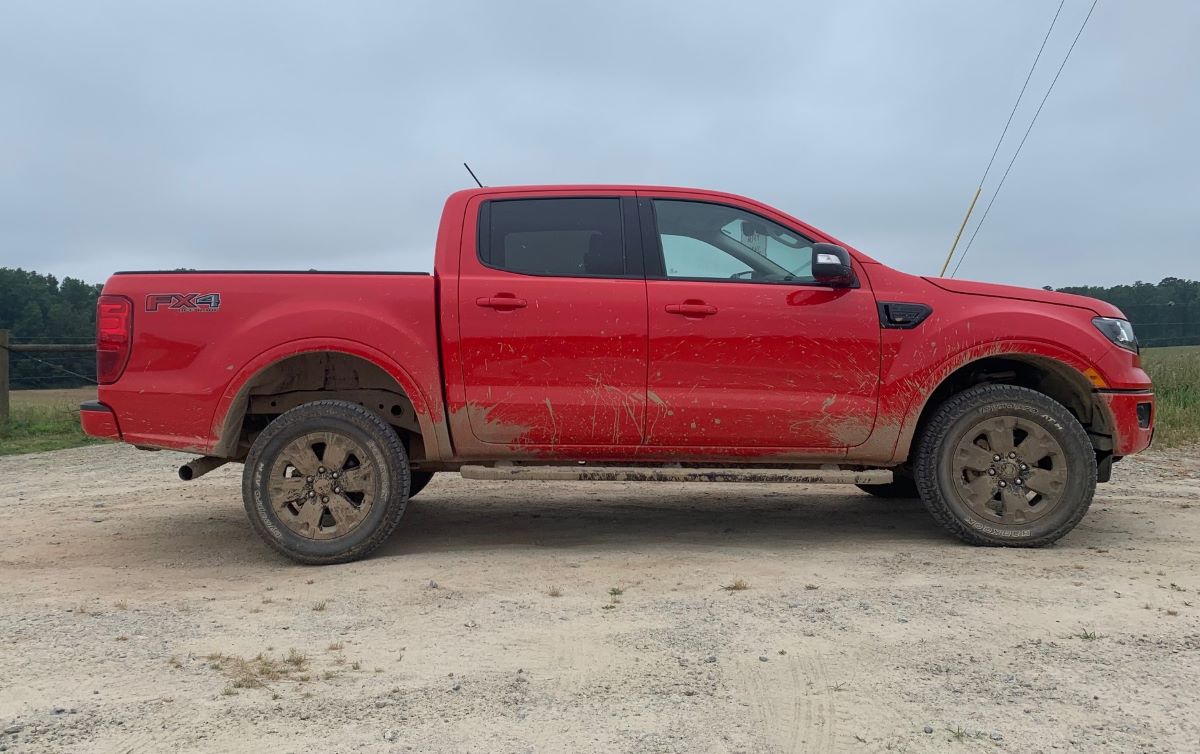 The two cabin choices give customers much to consider when examining the 2020 Ranger. The SuperCab seats four with a pair of rear seats with removable cushions. Furthermore, customers have the option of deleting the rear seat.

Shoppers will find hard plastics in abundance throughout the interior with the Lariat featuring a stitched dashboard. Most competing models offer nicer materials, so you’re getting a basic package here regardless of the trim.

As for the SuperCab model, this one seats five. Behind the front bucket seats is a three-passenger bench seat with a fold-down center armrest and two cupholders. Although three can sit back there, the narrow hip room makes it ideal for two. Both cabs come with rear under-seat storage.

Among the standard features you’ll find black vinyl flooring, cloth-trimmed seats, a manual tilt-and-telescopic steering column, and a vinyl steering wheel with audio controls. Work crews may substitute the cloth seats for vinyl. Features such a remote keyless entry, power door and tailgate locks, and cruise control are bundled within an upgradeable package.

Move up to the XLT trim and Ford includes carpeted flooring, an overhead console with sunglasses holder, dual-zone climate control, and power door and tailgate locks. At the Lariat level, the Ranger comes with leather touches, ambient lighting, power-controlled and heated front seats, and a manual sliding rear window. 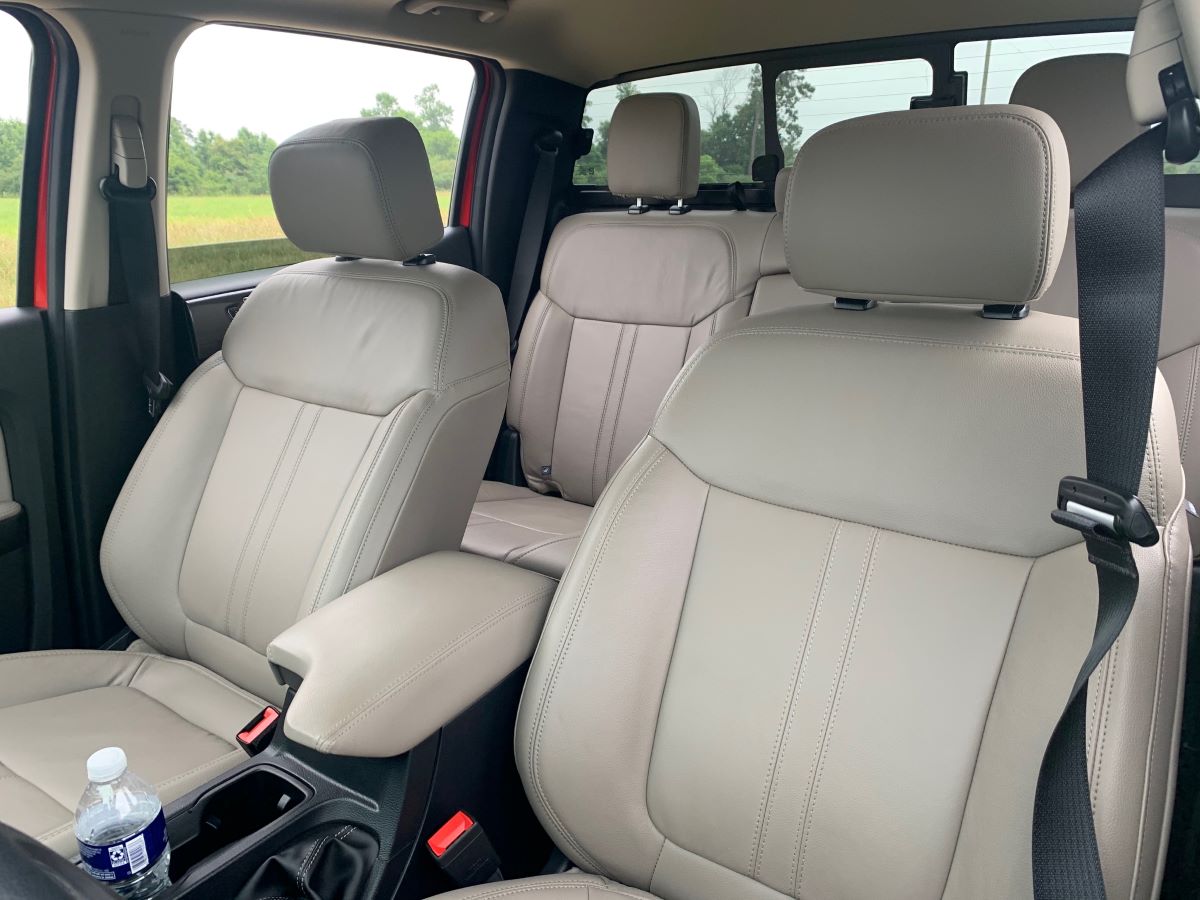 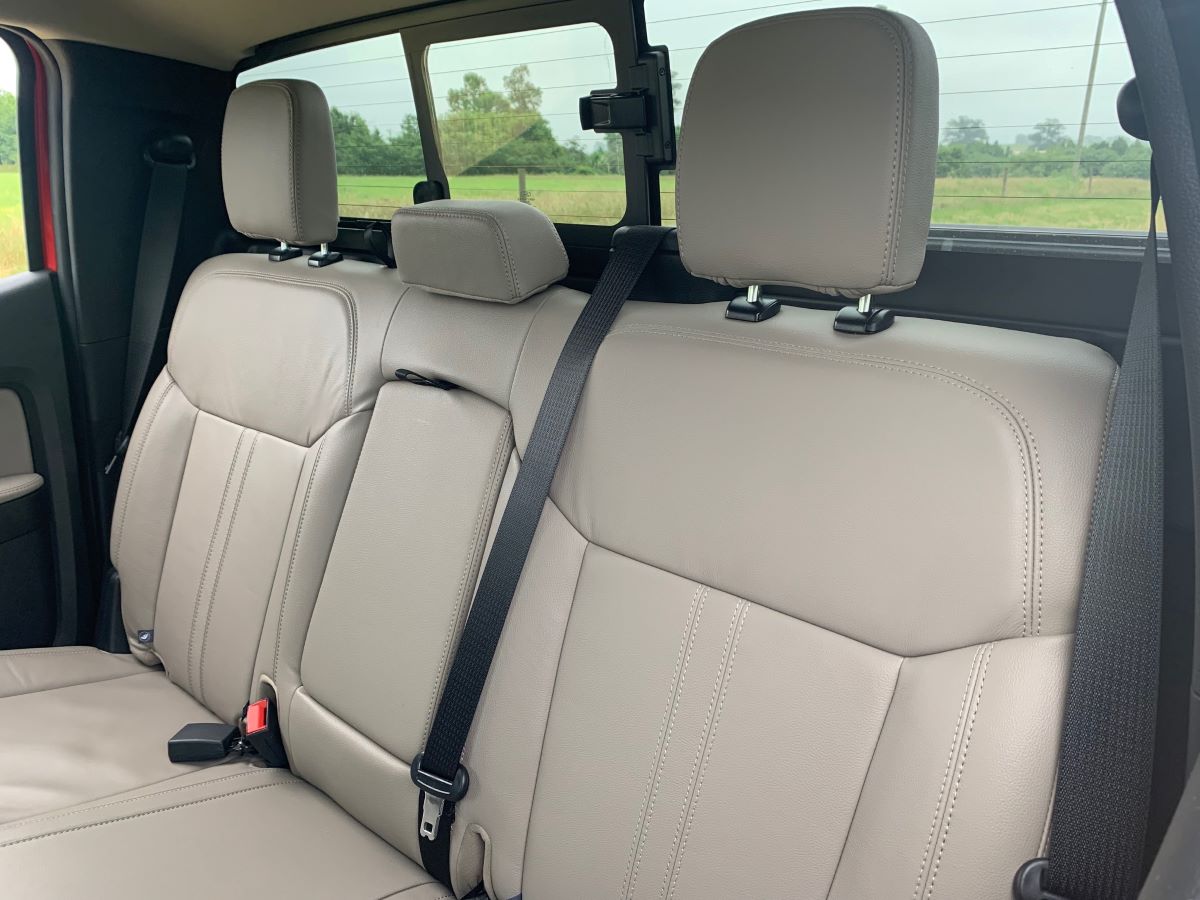 Beyond the standard safety features, including the rear-view camera with dynamic hitch assist, all Ranger models have pre-collision assist with automatic emergency braking.

Bundled under the available Ford Co-Pilot360 banner are additional driver-assist features. These include: pre-collision assist with automatic high-beam headlamps, automatic emergency braking, a blind-spot information system, a lane-keeping system with alert, and a reverse sensing system.

These are the kind of safety features we’re seeing on nearly all new vehicles these days, including pickup trucks. But not all competing models offer them, including the Nissan Frontier.

Ford equips the XL trim with a basic 4-speaker audio system with Bluetooth. But to get other features, such as a 4.2-inch center console screen and USB ports, requires a package upgrade.

Move up to the XLT and Ford rolls out the features most consumers want, including an 8-inch touch-screen display with the company’s useful SYNC3 infotainment system, Android Auto and Apple CarPlay smartphone compatibility, satellite radio, and two USB ports. The Lariat is also where shoppers gain a 6-speaker audio system. Also, they can opt for an equipment group upgrade that includes a 10-speaker audio system with HD Radio.

As for navigation, this feature becomes available at the XLT level. Ford also offers a 110-volt power outlet with the Ford Co-Pilot360 system. 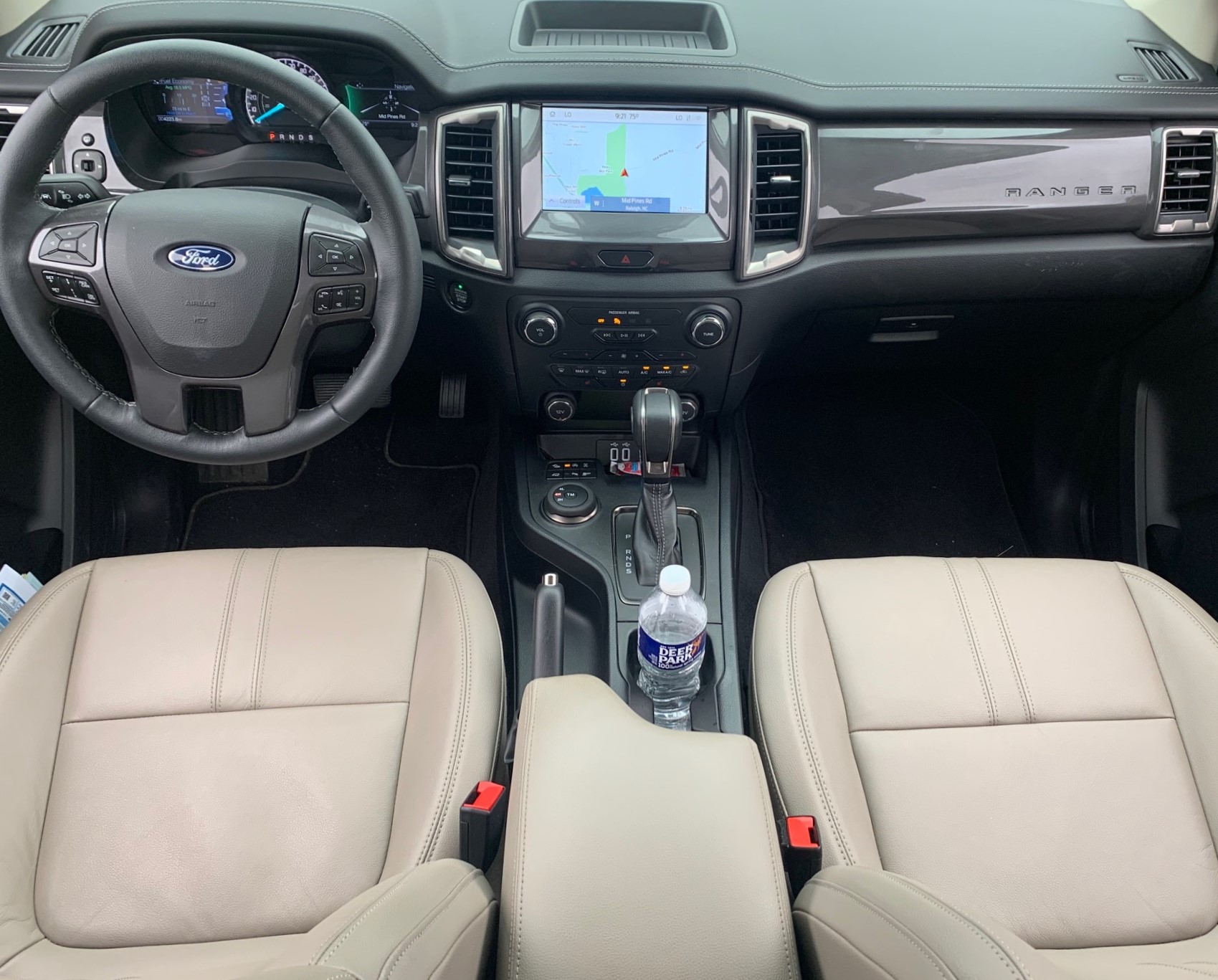 Buyers looking for a choice of engines in this segment typically will find just one and that’s a stark contrast to their full-size counterparts.

Powering every 2020 Ranger is a turbocharged 2.3-liter four-cylinder engine with 270 horsepower and 310 pound-feet of torque. A 10-speed automatic transmission routes power to the rear or all four wheels.

This engine is a gamer and one of our favorites in the segment. The turbo spools quickly, then delivers large V6-equivalent power. Where step-off acceleration is competent, the Ranger’s passing power is fantastic. We found the transmission up to the task, as it quickly fired off cogs and did so without hunting for gears.

With a trail-busting FX4 on hand, we set out to Uwharrie National Forest to put it through the paces. This version is replete with a torque-distributing electronic rear differential – power travels to the wheel that needs it most. The FX4 package also adds off-road traction modes for powering down trails at preset speeds. It’s the off-road version of cruise control.

Uwharrie features eight trails featuring varying degrees of difficulty, with all operating under the Badin Lake OHV Trail Complex banner. Last year, at nearly the same time, we put a Jeep Wrangler through the paces, choosing the Dickey Bell TR 91 trail for our experience. That trail is rated “difficult” and we soon found out why – it features a steep drop off near the end. We didn’t finish the course, but we covered most of it.

For the Ranger, we decided to find the easiest trail, not wanting to navigate anything too rigorous, especially as our test model came with side steps. We knew that the Dickey Bell and the equally challenging Dutch John were out. And certainly, the extremely difficult Daniel trail was not on our list.

The meat of the trail network is composed of a quartet of moderate-rated trails: Falls Dam, Rocky Mountain Loop, Saw Mill, and Slab Pile. We considered those, but settled on the “easy” Wolf Den for trail exploration.

Like the other Baden Lake trails, the Wolf Den still requires careful navigation. A boulder here, a rut there, and then suddenly a challenge presents itself. We navigated the first quarter-mile with ease, then faced our first obstacle: a trio of berms.

Taken alone, the berms were challenging, yet passable. But the issue we soon faced had everything to do with the side steps – we just couldn’t risk damaging them even with careful axle articulation. While the approach and departure angles seemed doable, the breakover was the biggest risk especially as the bottom of the side steps touched the top of the first berm

Deft wheel play enabled us to move forward, but the subsequent berms were too close for comfort. Removing the side steps would have quickly resolved the problem, but we had neither the tools nor the permission from Ford to do so.

Within 15 minutes of starting our voyage, we abandoned the trail.

Despite not completing even one Uwharrie trail, we decided to navigate the main gravel road that rings the lake. It presented its own challenges in various places, but the tires gripped, and we passed through a few mud sloughs along the way. The Ranger performed as we expected. We only wish it came without the step rails.

Off the trail, we like the Ranger’s weighted steering and precise handling. It’s not the most comfortable truck in its class, however, as we felt more bounce than what we’d prefer or expect. That said, the current Ranger is an improvement over the previous generations in many ways – it has a more solid feel and is designed to take more punishment. But it isn’t especially efficient as it averages about 20 mpg. On the other hand, its robust 7,500-pound towing capacity makes it a gamer.

The midsize pickup truck segment was just about dead a few years back when the Chevrolet Colorado and GMC Canyon twins revived it with their 2015 return. Today, there are several models to consider, including the segment-leading Toyota Tacoma.

Other trucks in this category include the Nissan Frontier, Jeep Gladiator, and the Honda Ridgeline. The Ridgeline is the only car-based model among them, but it should be suitable for anyone who isn’t looking for off-road grit. 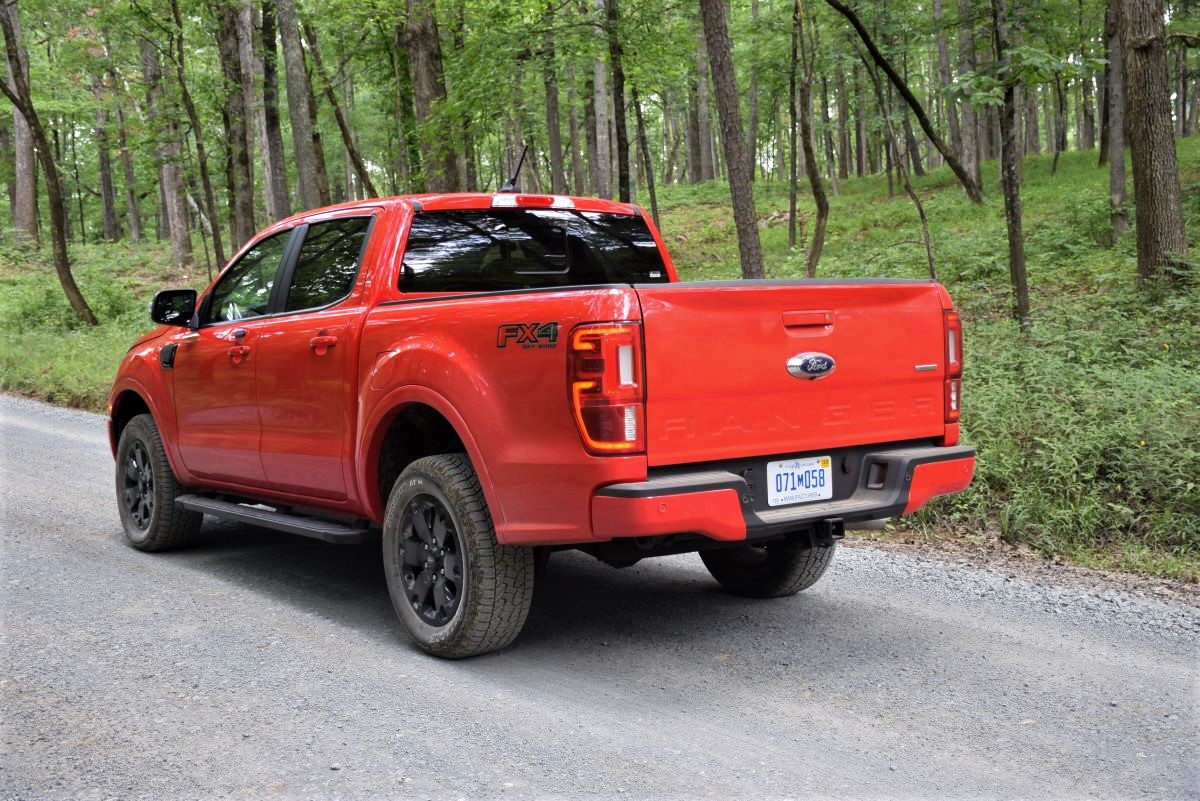 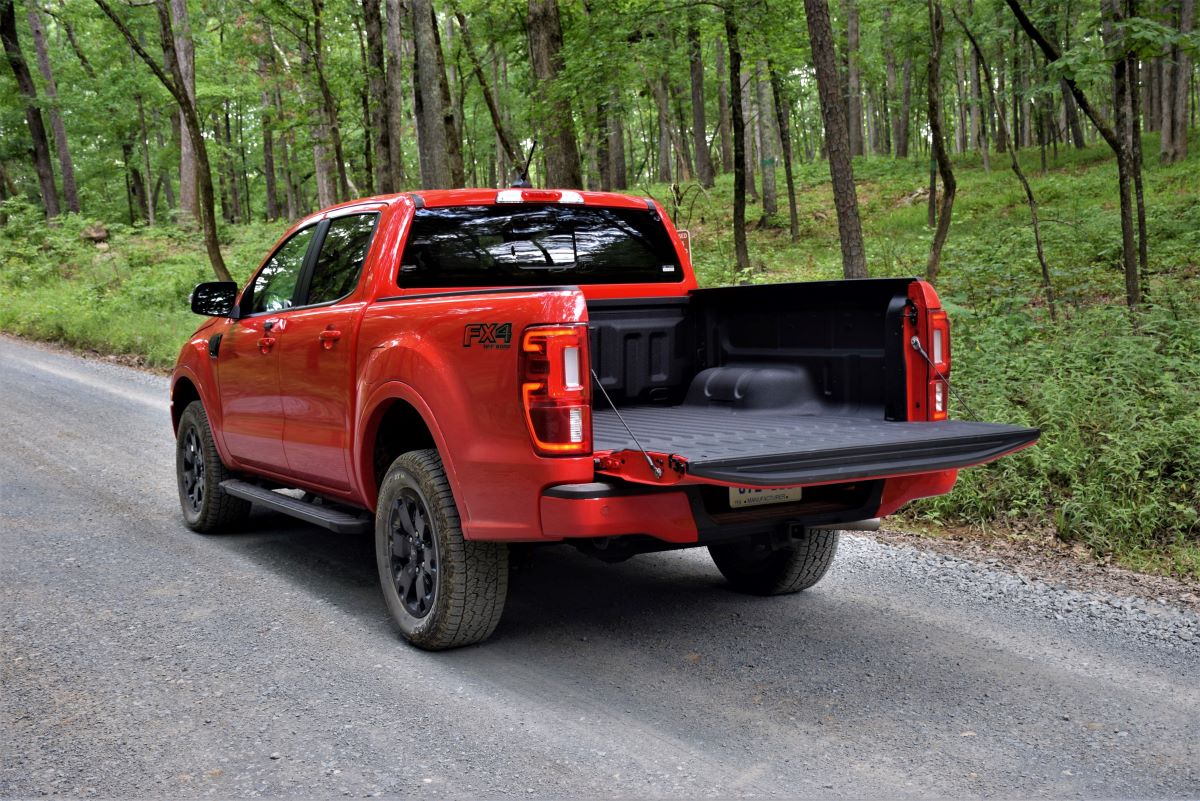 We can’t see buying a base Ranger as this model is too minimal for most needs. Also, our pick is the CrewCab, which is ideal for anyone who expects to carry more than two adults at any time. The SuperCab’s back seat is suitable for small children or additional storage, but it isn’t an ideal environment for adults.

An XLT SuperCab with four-wheel drive is the most sensible model in our book. This one goes for $36,475. We’d encourage anyone to opt for the FX4 Off-Road Package ($1,295), which brings your cost to just under $38,000. A $495 Tow Package is a must for anyone desiring the Ranger’s maximum towing capabilities.