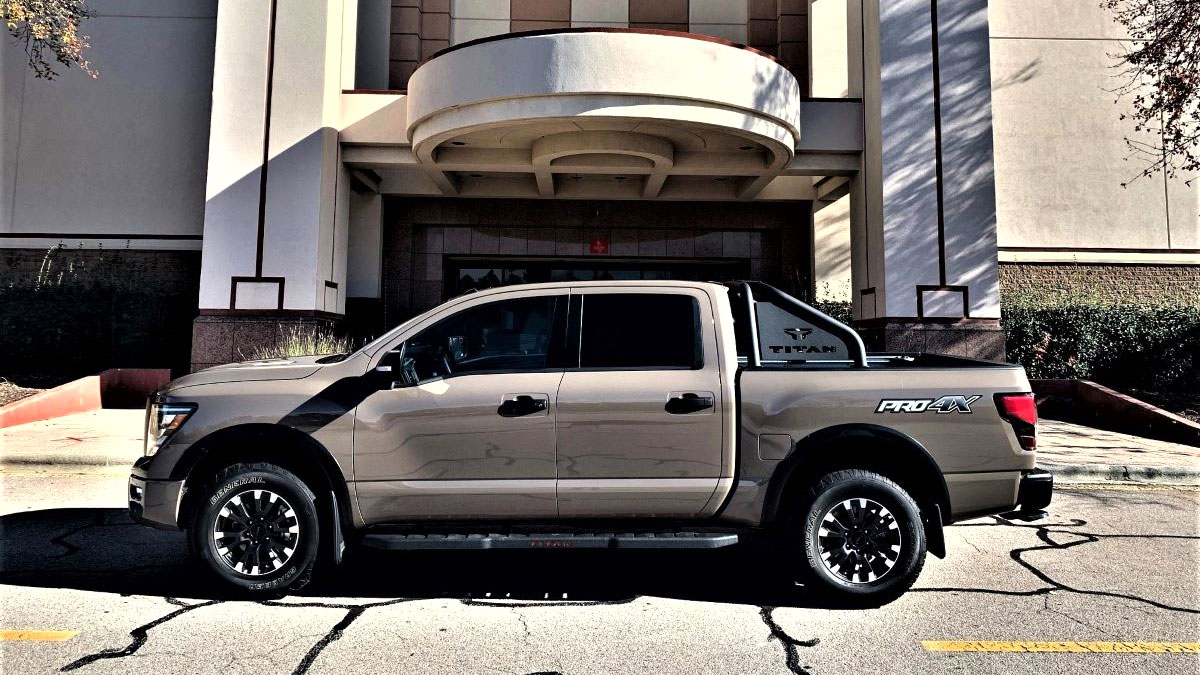 Nissan’s full-size pickup truck soldiers on in a tough segment.

We love our full-size pickup trucks as they have largely replaced family sedans for a significant number of consumers. Nissan’s entry is the Titan, an appropriate name for the brand’s largest and most powerful truck.

In addition to carrying as many as six people, the Titan checks off the marks for generous payload and tow ratings. Along with the all-new Frontier, the two trucks give Nissan a powerful 1-2 punch for consumer consideration.

Nissan offers the 2021 Titan in two configurations: King Cab and Extended Cab. The King Cab has an approximate 6.5-foot bed, while the Extended Cab has a 5.5-foot bed. The Regular Cab with its standard 8-foot bed is no more as it was discontinued after the 2019 model year.

The King Cab comes in S, SV, and PRO-4X trims, the latter with standard four-wheel drive. As for the Crew Cab, it is offered in S, SV, PRO-4X, SL, and Platinum Reserve trims. 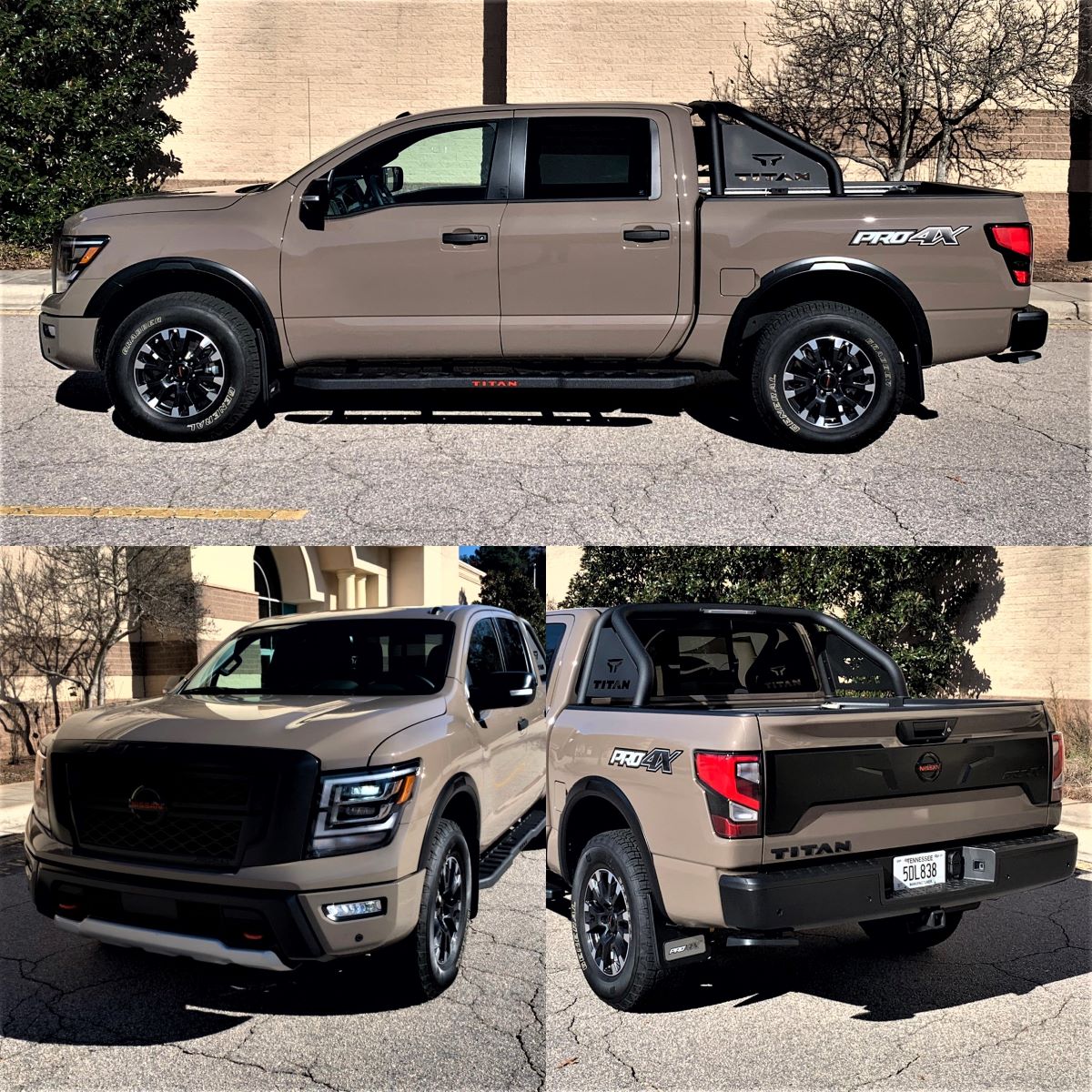 The Nissan Titan has no difficulty keeping up with the industry’s big boys. Its size matches most competitors and its demeanor projects brawn and supremacy.

A capacious front grille, LED lighting accents, and a long slab side are the usual features of big trucks and are also found here. Moving away from the base model adds embellishments and blandishments such as chrome grille surround, running boards, a rear utility bed step, paint upgrades, and fender touches to the mix. A dual-panel panoramic moonroof with tilt and slide is available on the top three trims. 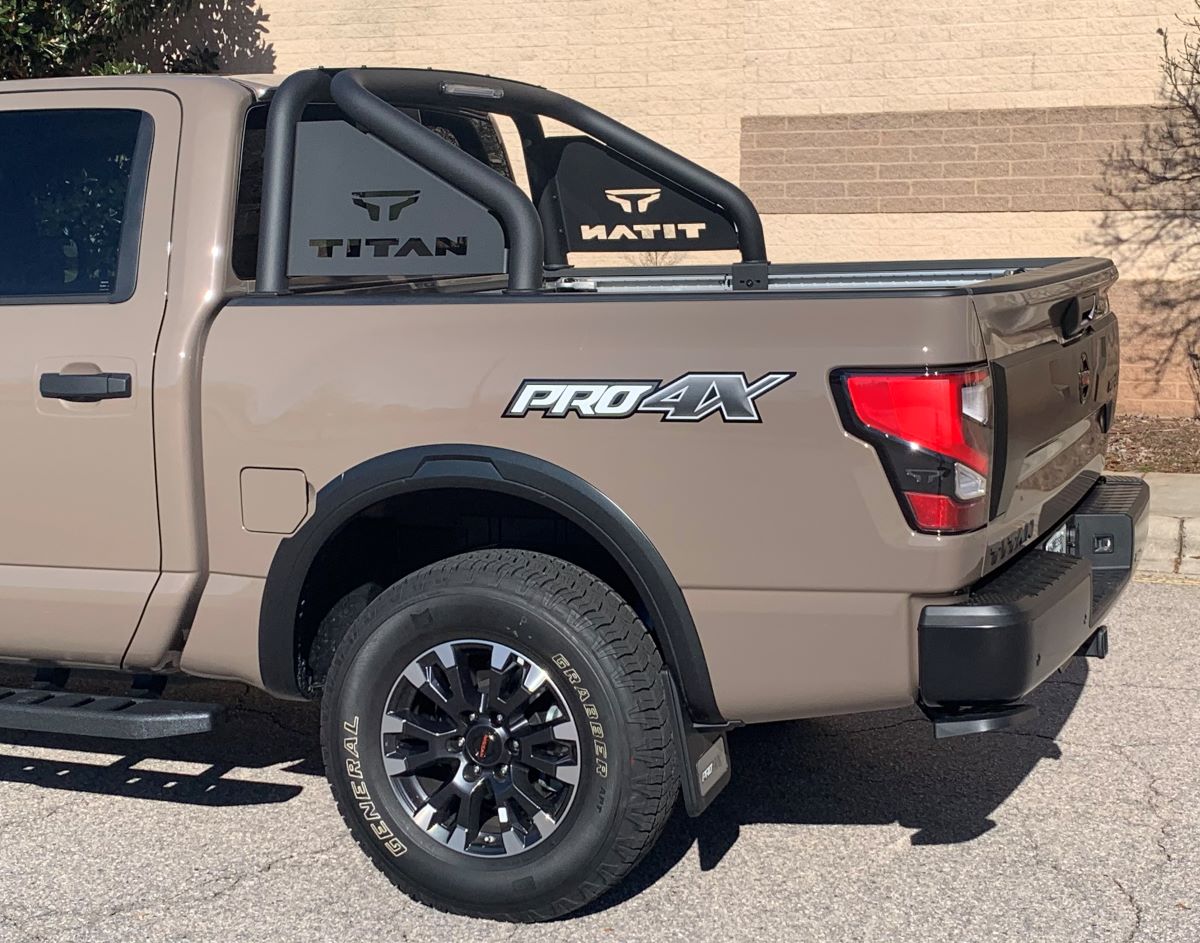 Most trims, with the exception of the base model, offer front tow hooks, a trailer brake controller, trailer light, pin connectors, and a receiver hitch. Tow mirrors are attainable, otherwise power-folding and heated side mirrors can be had.

The standard 18-inch steel wheels give way to 18- or 20-inch aluminum-alloy wheels elsewhere. Most models offer all-season tires, although all-terrain tires are also procurable. A full-size spare is standard across the model line. 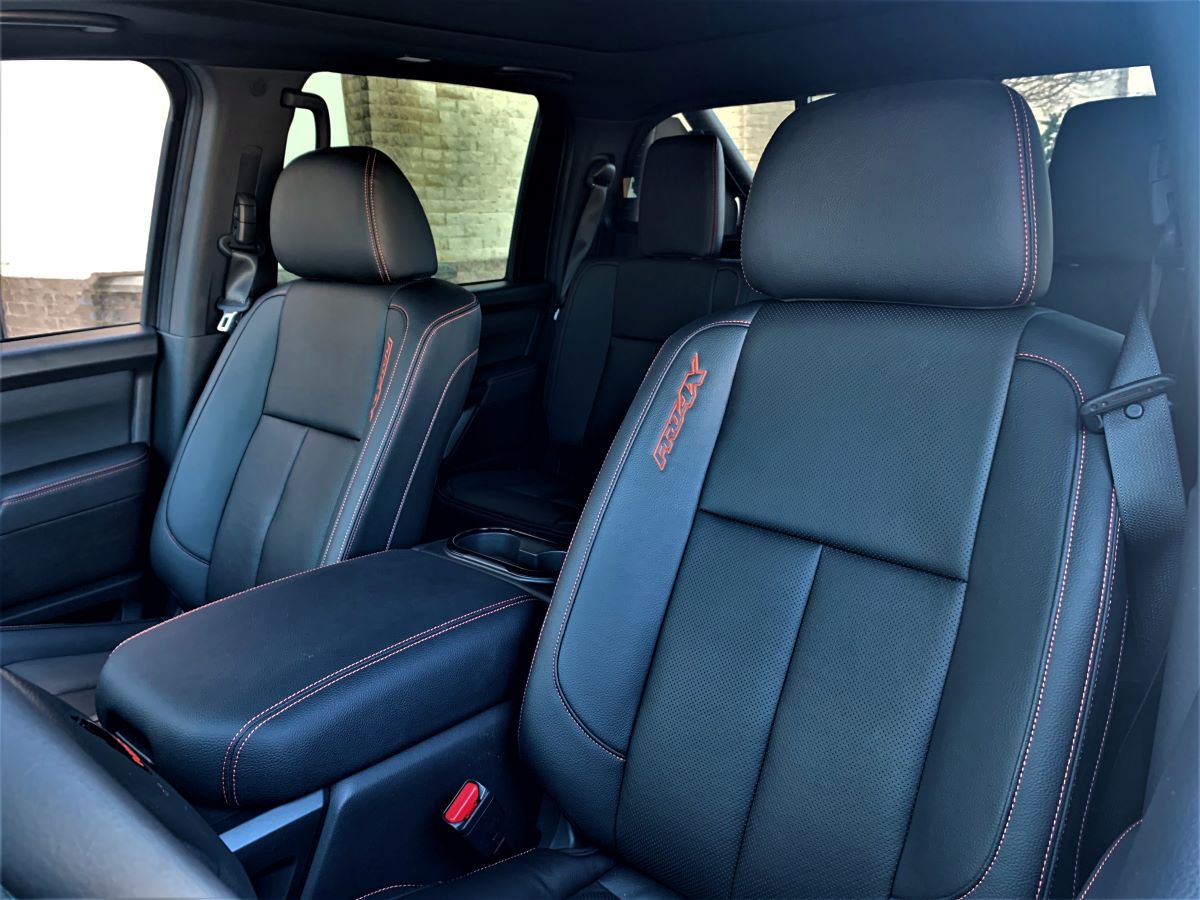 The Nissan Titan takes second place to no one in passenger roominess. We understand the reasoning for a King Cab model, but most shoppers will likely gravitate toward the spacious Crew Cab. After all, with five or six big guys to transport, the Crew Cab offers an important edge in legroom.

We expect supersized interiors in our full-size trucks. The Nissan Titan doesn’t disappoint. Big, cushy seats up front, an oversized center console, and multiple storage possibilities between the front seats make the Titan a comfortable office on wheels.

There are compartments for a cell phone, drinks, storage space for a purse, and enough space between the seats to maintain critical files.

The front panel, comprising the instrument panel, center console, and the dashboard is straightforward. The transmission shifter is fixed to the steering column, freeing up space below and creating an orderly look.

The dashboard is expansive and covered in soft-touch materials. The only element we miss is a dual glovebox – Nissan utilizes just one, although it is substantial as you would find in any truck. 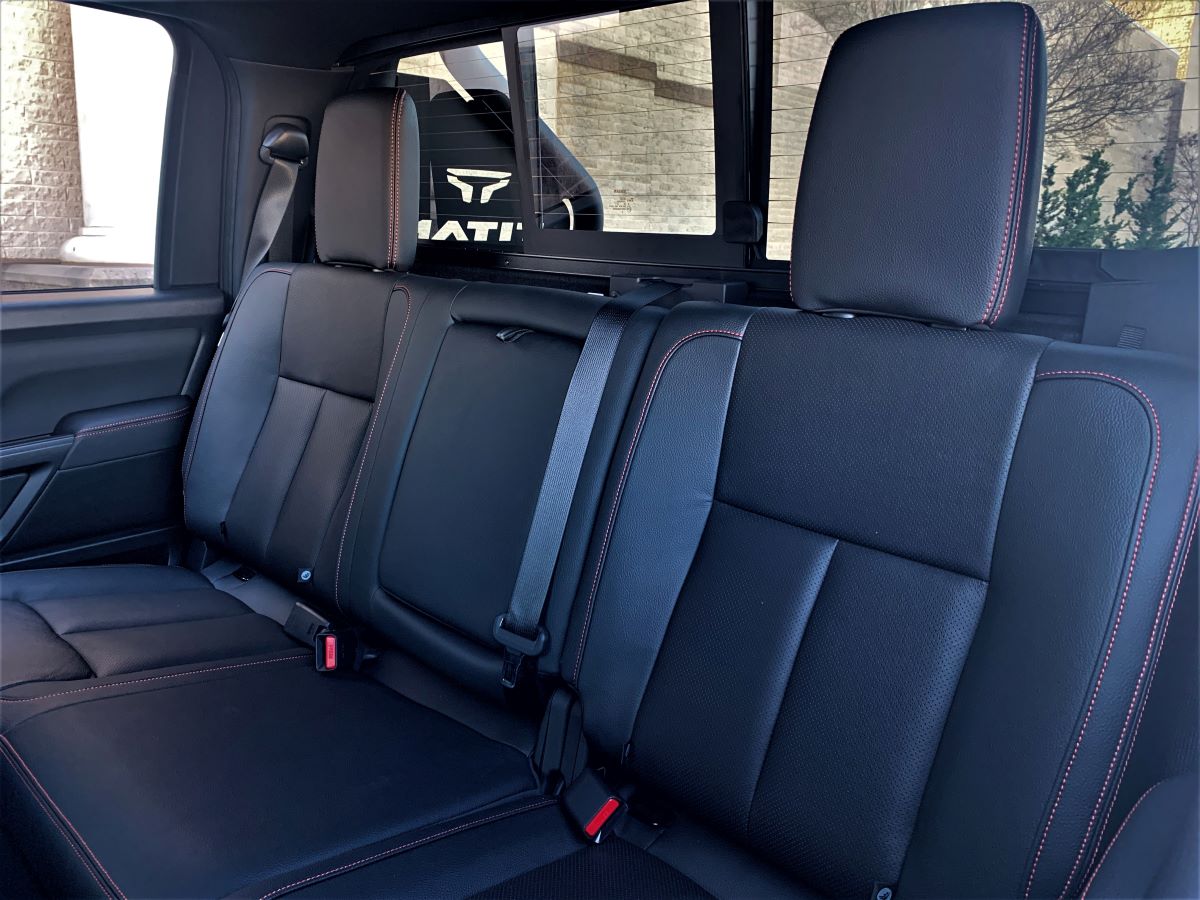 Beginning with the standard trim with cloth seats and vinyl inserts, the Titan builds on this model with cloth, then follows with various levels of leather trim. Only the S and SV trims come with a standard front split (40/20/40) bench seat; the other trims have front bucket seats (optional on the SV).

The second-row 60/40 seats fold down and fold up. Underneath the seats is a storage compartment, which is useful for hiding valuable tools out of sight. A flip-down center armrest console is standard. 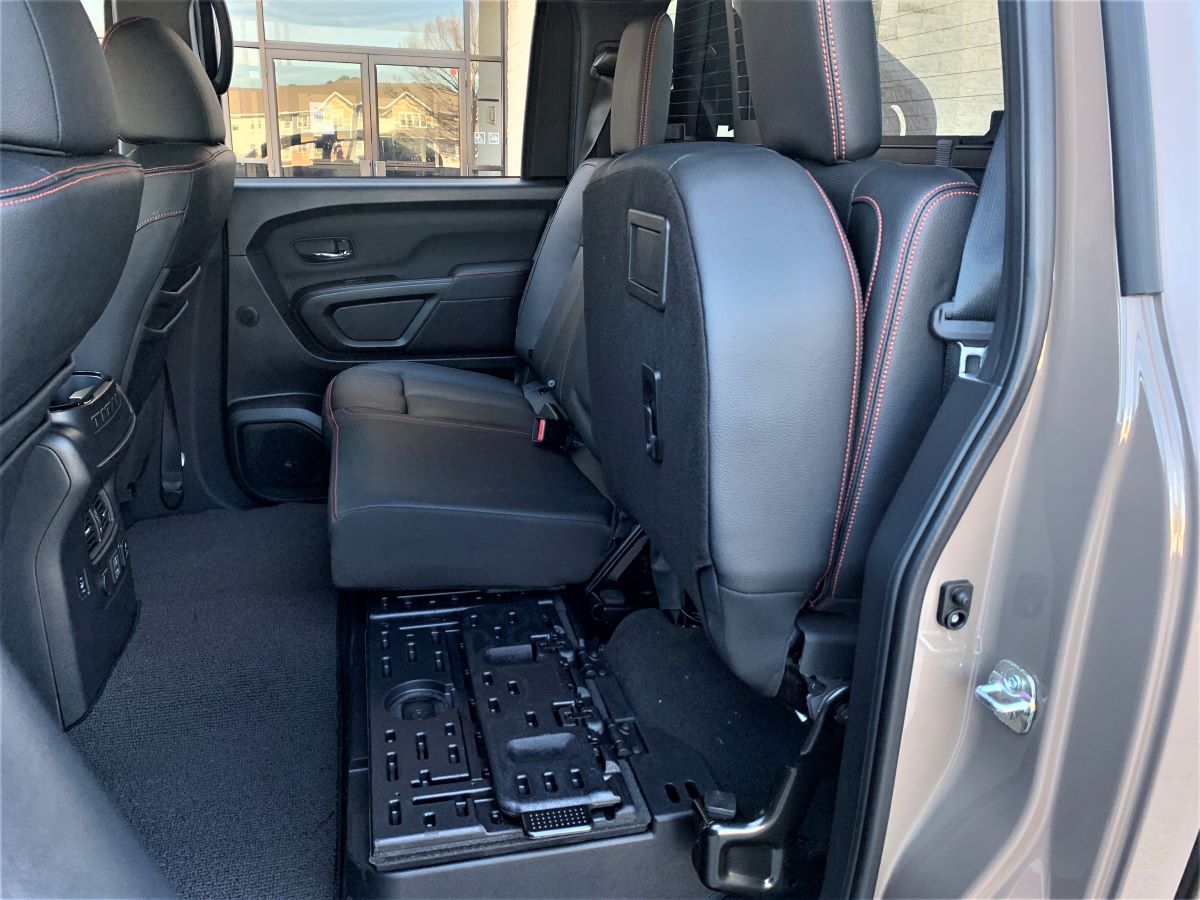 Choose the Platinum Reserve and it has two features exclusive to this trim, including open-pore wood finishers and metallic kick plates. These features serve to buoy up the Titan into premium territory, similar to what the top trims of competing models are designed to do. 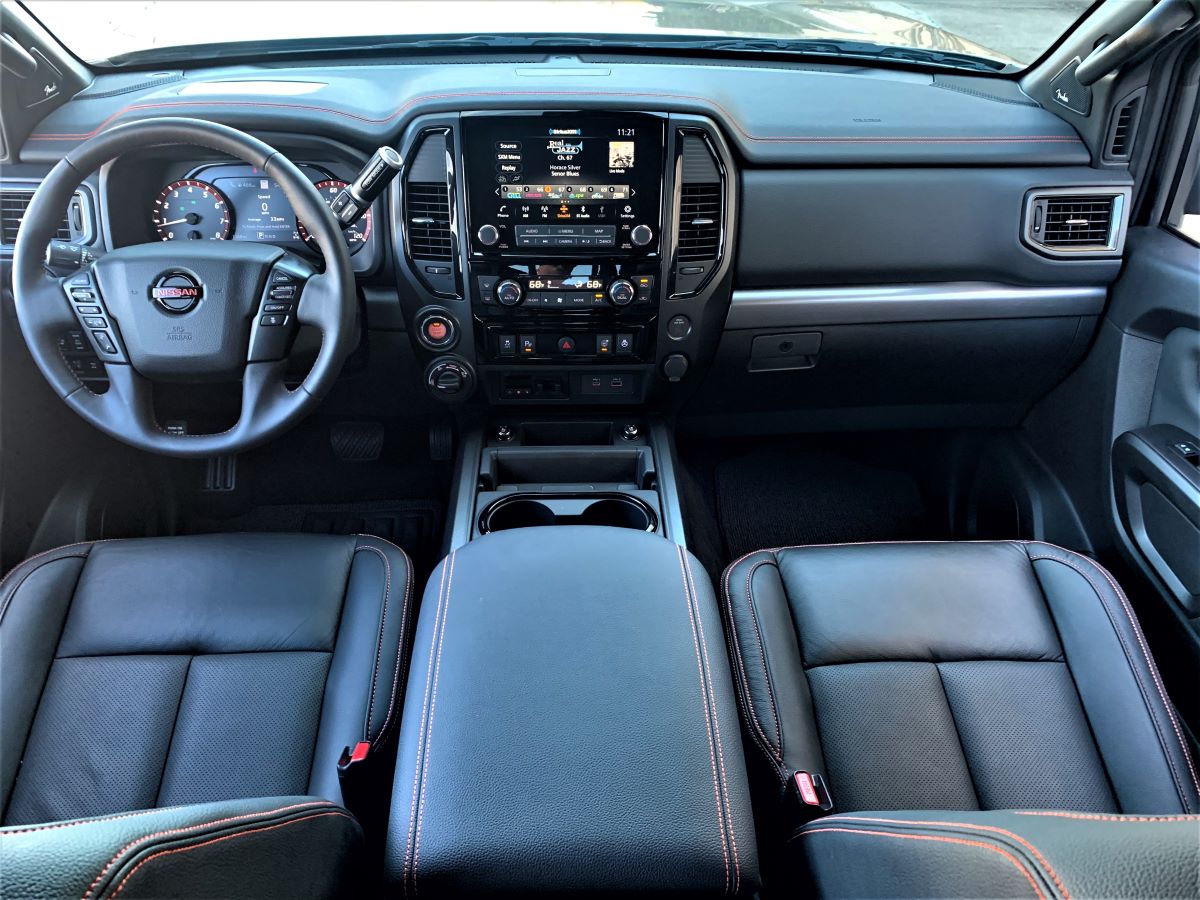 If it’s a big screen you want, the Titan delivers with its standard 8-inch touchscreen display. Along with the 7-inch programmable driver information display in the instrument panel, Nissan delivers the largest standard screens among most models.

Other standard features include two USB ports, six speakers, satellite radio, Bluetooth, and Android Auto and Apple CarPlay compatibility. Choose the 9-inch display and Nissan adds navigation with available voice recognition. Other upgrades include a pair of 10-speaker audio systems (12 with the Crew Cab); a Fender system is one of the options.

A 110-volt power outlet is available. 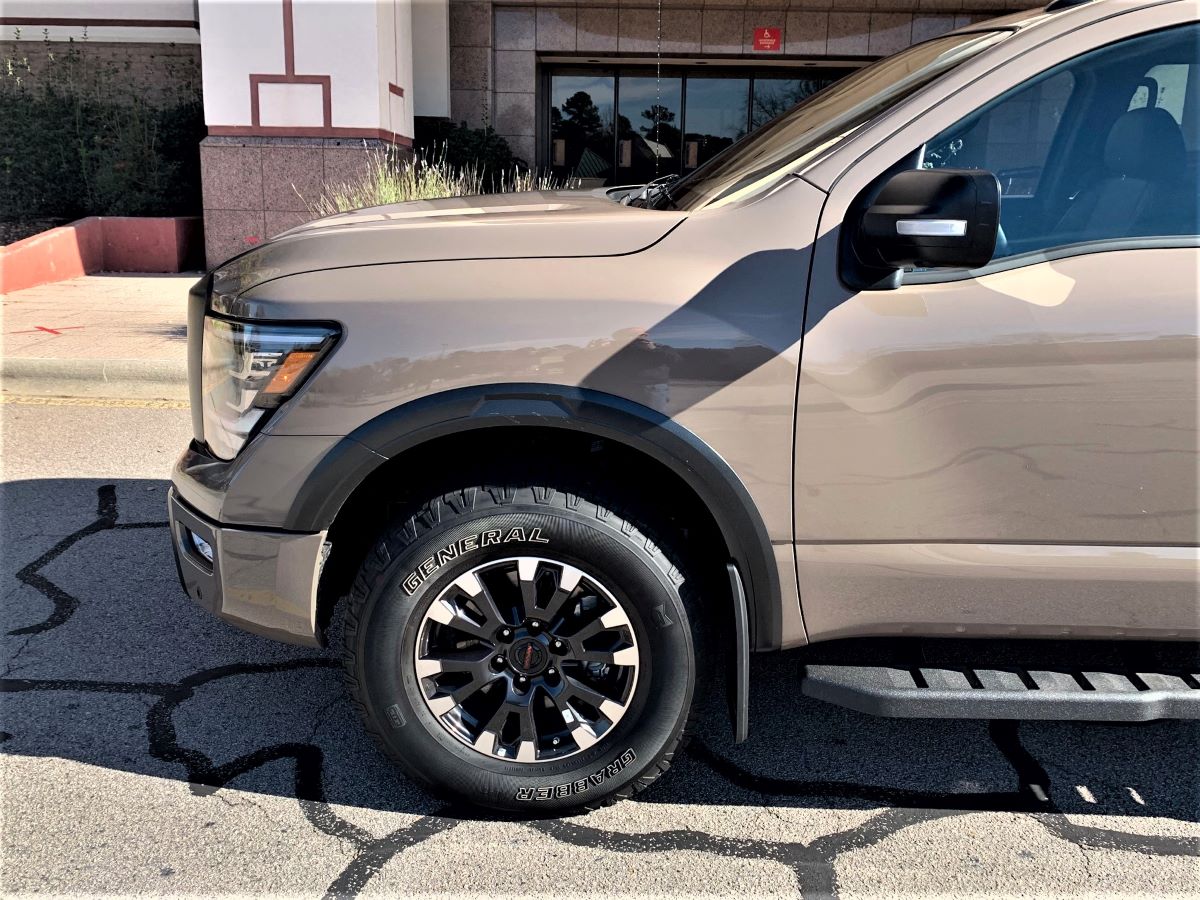 Other available features depend largely on trim and package choices. The brand’s so-called Intelligent Forward Collision Warning utilizes a radar sensor located in the front of the truck to detect the distance between the two vehicles ahead, enabling the system to adjust the truck’s speed accordingly. 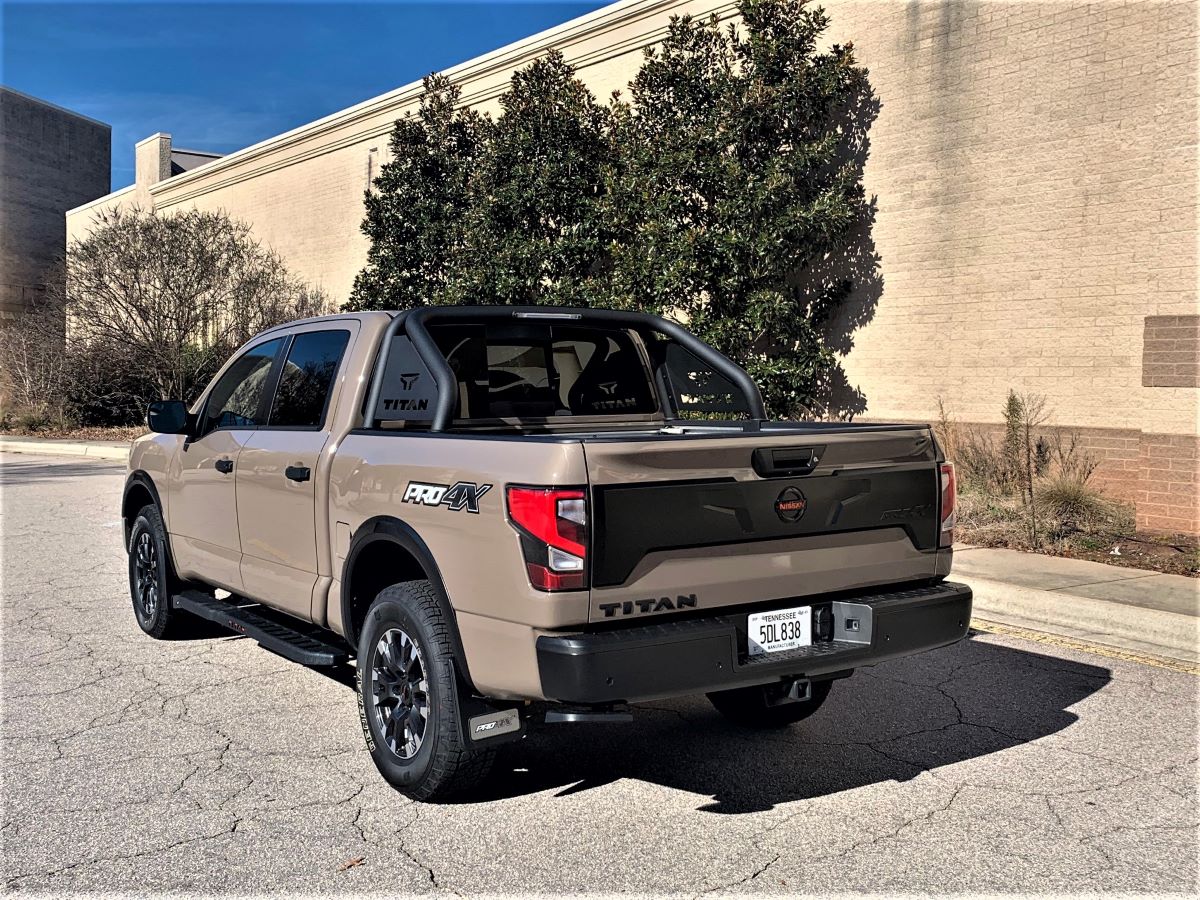 The Nissan Titan family is down to just one powertrain choice, following the removal of the Cummins turbo-diesel option with the Titan XD. Also, there was supposed to have been a V6 engine option, but that choice was never finalized. Blame limited sales for Nissan keeping its powertrain choice to just one: a 5.6-liter V8 paired with a 9-speed automatic transmission.

For customers wanting robust power, the V8 hits the mark. This one develops 400 horsepower and 413 pound-feet of torque, the latter the most standard torque in its class, according to Nissan. The engine isn’t new, but the 9-speed automatic is – it made it’s debut in 2020, replacing the previous 7-speed.

Nissan’s V8 is suited for the heavy and bulky Titan. We’ve said it before and we’ll say it again: the big V8 reminds us of Detroit’s traditional offerings: naturally aspirated with copious amounts of power on tap.

The V8 is up to the task as it helps move the Titan forward with authority. Notably, under hard acceleration, the engine quickly responds with the transmission responding immediately, essentially working quietly in the background.

Though ideally paired, this combination isn’t efficient at all, making an EPA-estimated 14 mpg combined. Oh, to have the option of having a small, but powerful diesel such as the ones available to Chevy, Ford, GMC, and RAM shoppers. But that’s not the case with the Titan or Tundra.

Our PRO-4X model came with standard four-wheel drive, but it defaults to two-wheel drive until the system is activated. That activation is quick with a slight turn of the knob engaging the front wheels.

We took the Titan on one of our favorite graveled roads, which was chock full of pits and puddles. It performed as expected, moving this burly beast forward with ease. No doubt this engine is up to the task of moving people, payload, and towing all at once.

The Titan competes in a small, but significant segment comprised of six model lines. If you’re looking for a smaller pickup truck, the Nissan Frontier is worth a look.

By volume, the Ford F-150 is the biggest seller, followed by the Ram 1500, Chevrolet Silverado, and the GMC Sierra.

You’ll also find the Toyota Tundra in this segment. However, like the Titan, the Tundra offers fewer powertrain choices and configurations than the domestic leaders. Furthermore, you won’t find heavy-duty versions of either model although the Titan XD occupies the white space between light- and heavy-duty models. 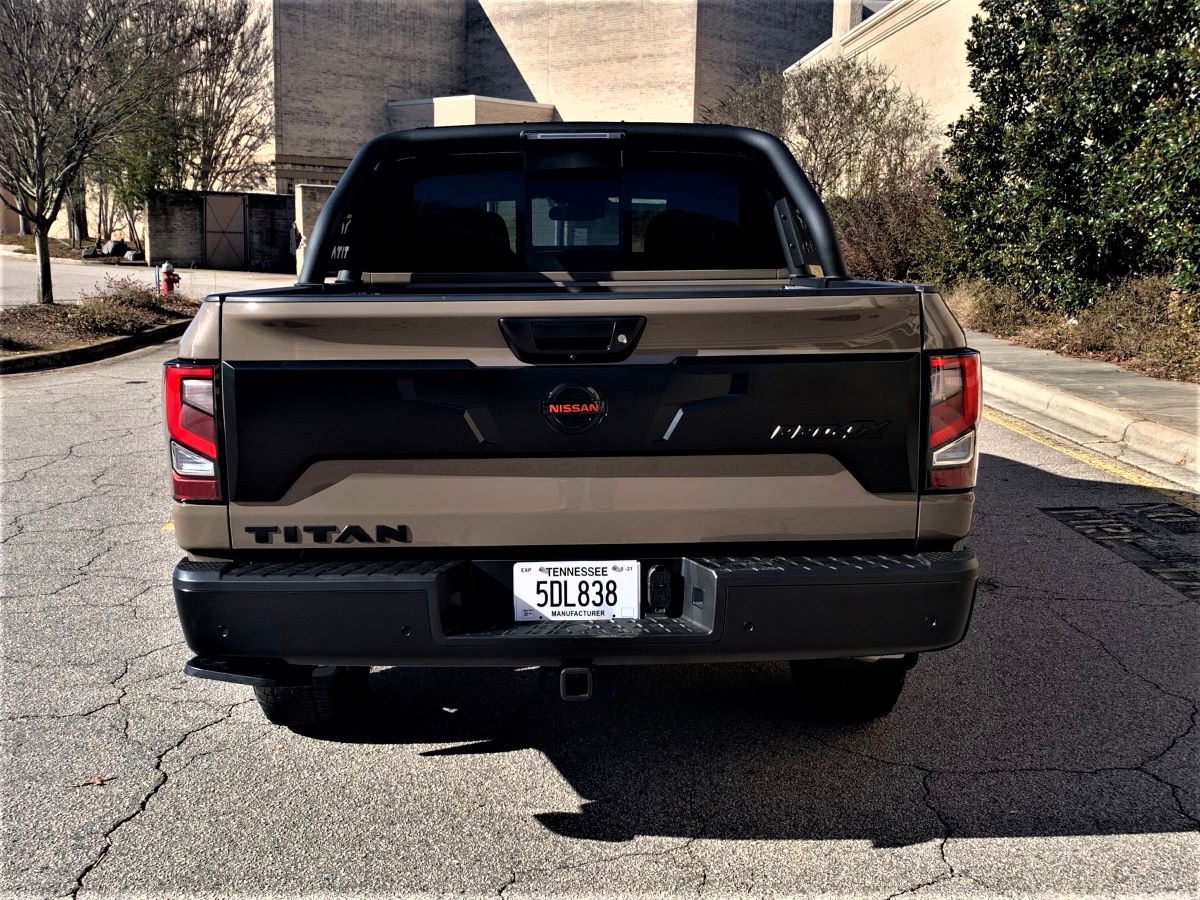 We’re smitten with the Crew Cab and all of its roominess inside. But the shorter bed may present a problem for some buyers, which leaves the King Cab as the lone choice with its longer bed.

The base S trims are likely too spartan for most shoppers as this one comes with a front manual split bench seat covered in cloth with vinyl bolsters. Begin your search with the SV and it seems to look like a truck we can live with as it adds floor carpeting, and overhead console, glove box lighting, and illuminated vanity mirrors.