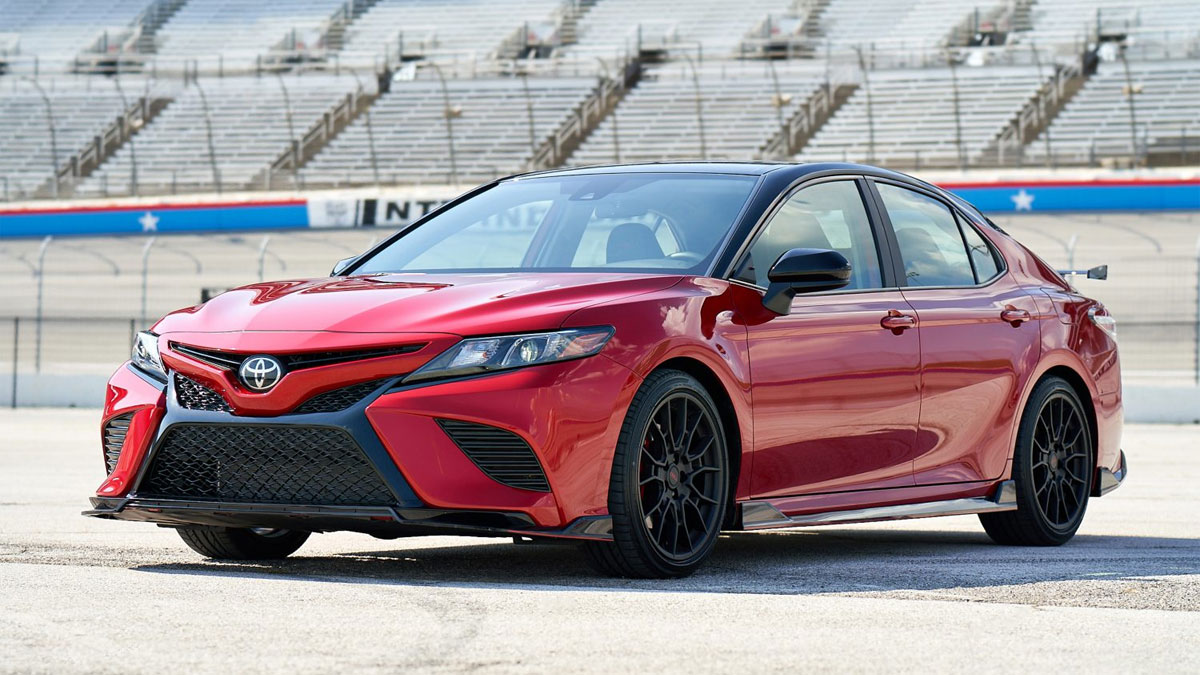 We’re concentrating on the all-new TRD trim for this review, but we’ll touch on the other trims as we see fit. The 2021 TRD is priced from $31,170 plus a $955 destination charge.

The other trims include the LE, SE, SE Nightshade, XLE, and the XSE. Yes, our test vehicle was a 2020 model, but we’re sharing 2021 details to reflect the current model year.

All Camry TRD models are front-wheel drive and come with a V6 engine paired with an automatic transmission. 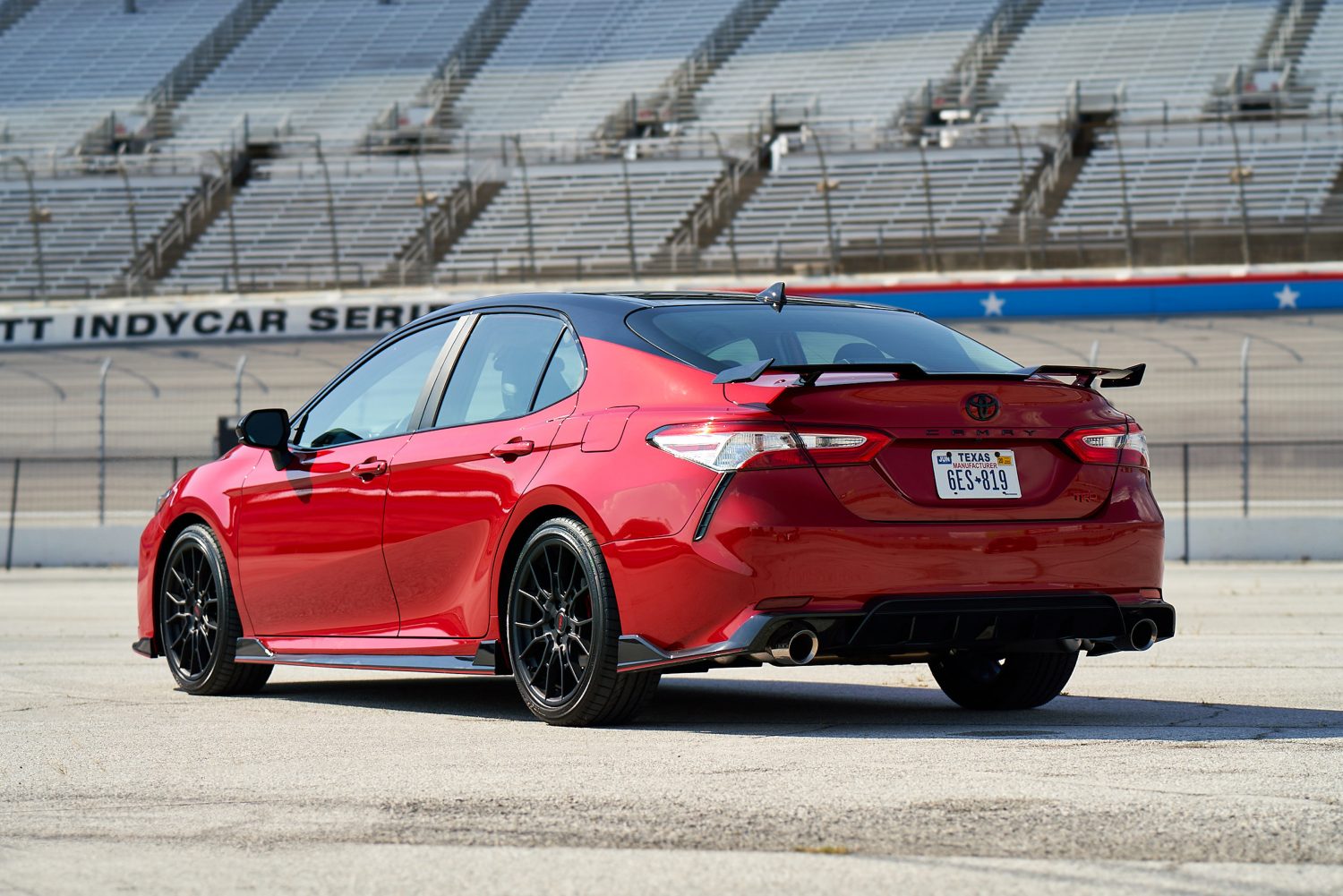 The TRD isn’t like any Camry we’ve seen to date. At least not one from Toyota. Sure, you may have seen a Camry equipped with aftermarket enhancements, but these are typically added by the owner, not by the factory or at the dealer level.

Until recently, Toyota Racing Development (TRD) concentrated mostly on enhancing the brand’s sports cars and pickup trucks. Now, both the Camry and large Avalon sedan benefit from the available upgrades.

Lots of special features are included with the TRD such as Bi-LED combination headlights with black accents, black painted outside mirrors and window trim, a TRD gloss black pedestal rear spoiler (wing), a front splitter, side aero skirts, and a rear diffuser with red pinstriping.

The TRD cat-back exhaust with polished stainless-steel tips is also unique to this trim. Like the XSE, this one comes with 19-inch wheels: but on this trim these are a TRD design.

Put together, the TRD takes what’s already a much more aggressive look for the Camry (especially since its 2018 overhaul) to provide the sportiest visage yet. It’s almost surprising for a model that was once downright bland, but we think Toyota pulled it off.

There’s a lot going on with this vehicle – sharp lines, an oversized gaping grille, multiple ridges and bulges, and divergent angles. It’s not a design for everyone even though the Camry is an everyday automobile.

Word has it that the take rate for V6 Camrys is only about 6 percent. Thus, Toyota has committed to evenly dividing production between V6 XLE, V6 XSE, and TRD trims. This means only 6,000 units of each V6 trim are produced annually.

We think the supersonic red will be the hardest to find as it offers more pop than the other choices. 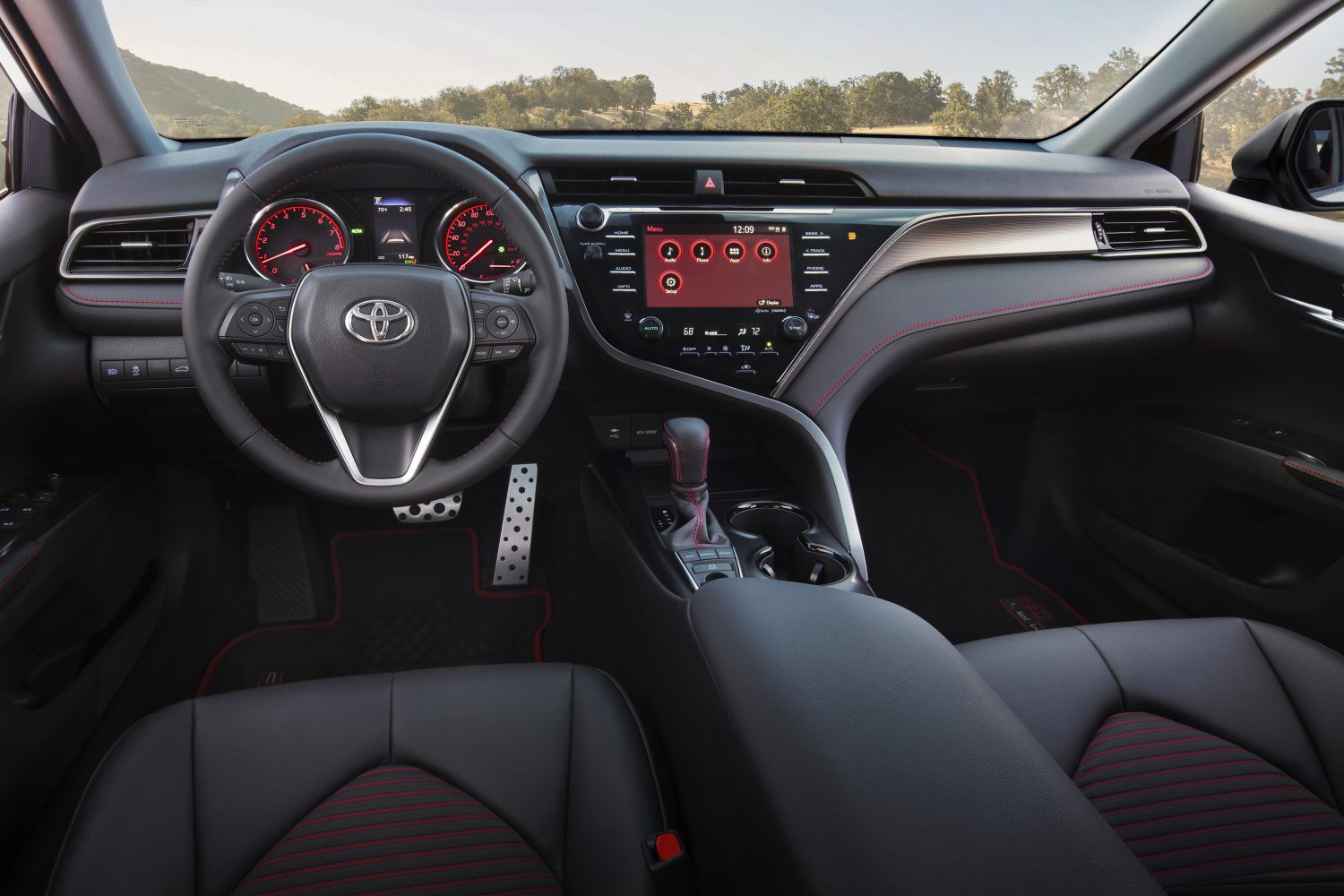 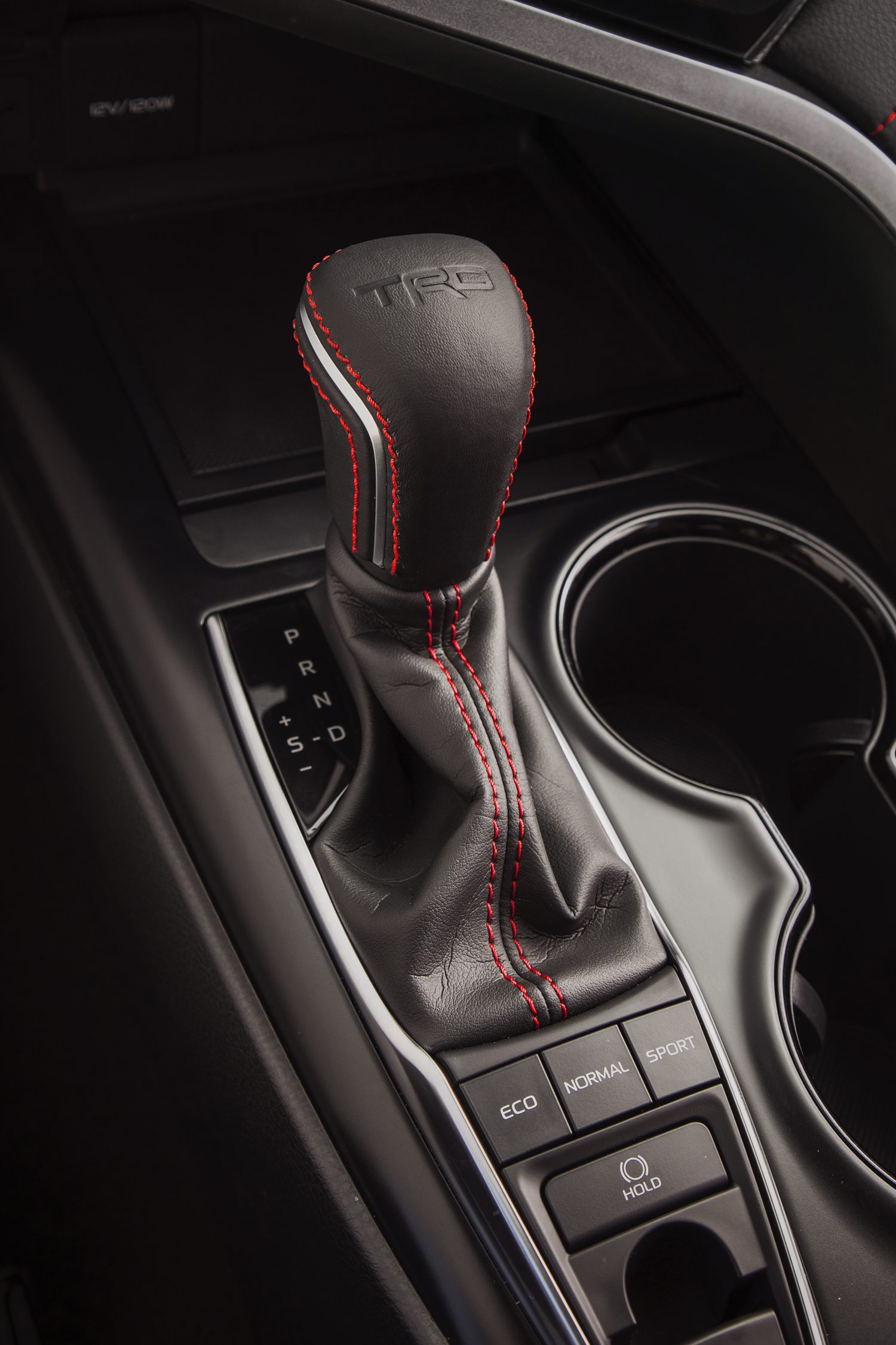 But Toyota doesn’t stop there – blind-spot monitoring with rear cross-traffic alert is included with the XLE trim and above. You get a full suite of safety features in the TRD, including some that would cost you extra in a luxury model.

These features build on what Toyota already has in place, namely a suite of 10 airbags, stability and traction control, electronic brake-force distribution, and smart stop technology. 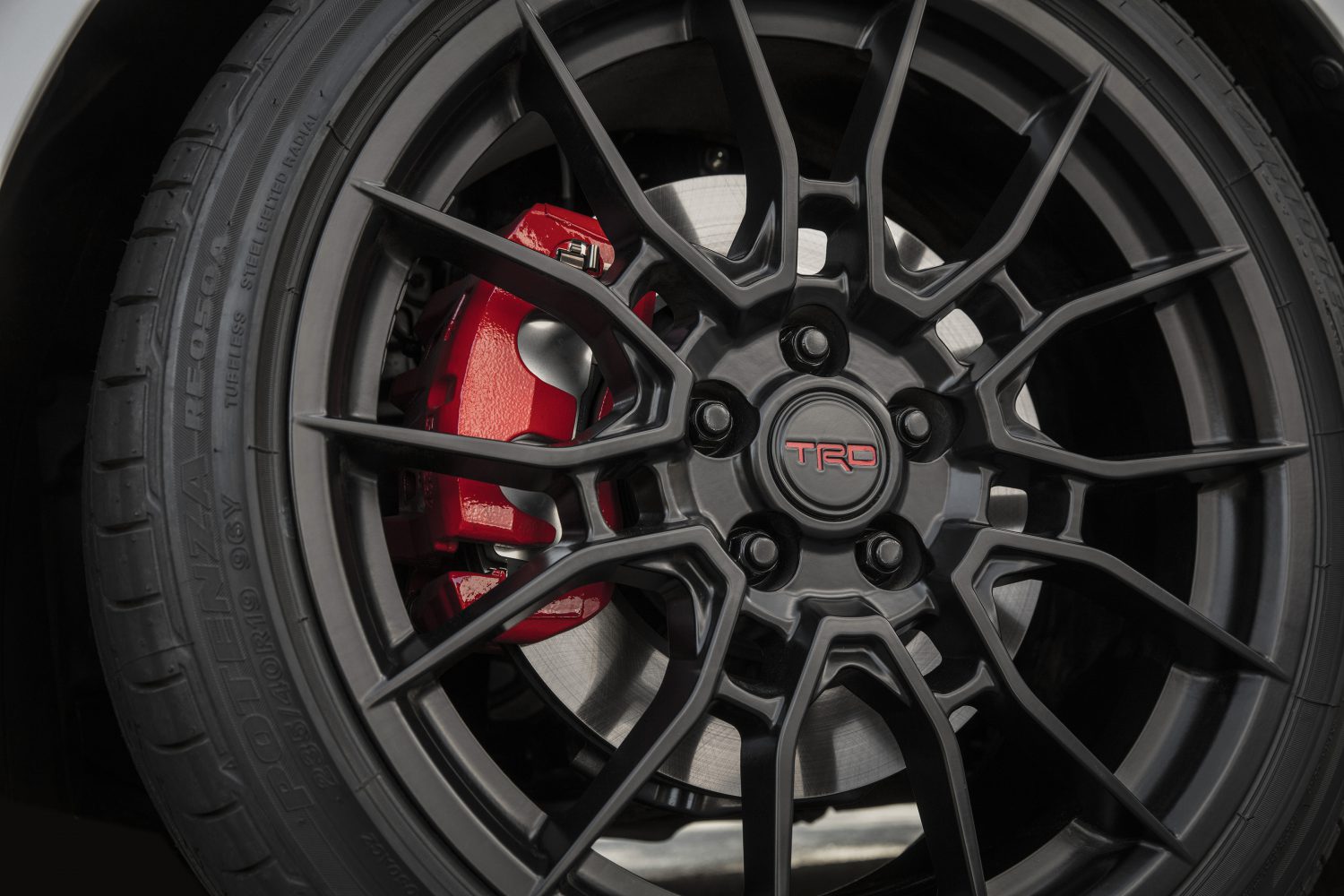 For 2021, Toyota continues with its standard four and available V6 option. This year, they’ve added available all-wheel drive with the base engine. This option has become increasingly popular with Nissan, Kia, and Toyota offering it, while Subaru keeps it standard with the Legacy.

In past years we’ve seen it on a pair of defunct models: the Chrysler 200 and Ford Fusion Sport. Figure that offering all-wheel drive is one initiative manufacturers employ to keep vehicle owners in the sedan fold by offering a feature that’s common with crossovers.

In TRD guise, the Camry demonstrates its sporty side with a delicious cat-back exhaust system resonating throughout the cabin. The suspension sits slightly lower to the ground and benefits from stiff dampers and thick sway bars.

Larger brakes and summer tires are other distinctives to set this vehicle apart. This also translates into a firm ride and that’s something to keep in mind when evaluating Camry trims.

We found the Camry TRD likeable in nearly every area. Sure, this is still a front-wheel-drive model, but it remains relatively composed on twisty roads. It doesn’t hold up in cornering as well as a rear-wheel-drive model, with some pitching and diving detected.

But that’s not its mission: the TRD is all about the look and feel of performance without the all-around chops. It reminds us of the Nissan Maxima and that’s not a bad thing.

Sidebar
Toyota also offers a Camry Hybrid. This one comes with a 2.5-liter inline-four-cylinder engine generating 176 horsepower and 163 pound-feet of torque. An electric motor also sends power to the front wheels by utilizing a continuously variable transmission.

When working in conjunction with the gas engine, this duo produces 208 horsepower. A lithium-ion battery pack stores power, which is derived from the engine and through regenerative braking. Toyota prices the 2020 Camry Hybrid from $28,430 (2021 prices not available as of this writing).

In this segment, the Honda Accord and Nissan Altima remain the top sellers after the Camry. Other models to consider include the Subaru Legacy, Volkswagen Passat, Kia K5, Chevrolet Malibu, Mazda6, and the Hyundai Sonata.

Models from Dodge, Chrysler, Mitsubishi, and Ford are no more. Other brands with mainstay models have disappeared along the way, including Oldsmobile, Mercury, Saturn, Plymouth, and Pontiac.