Nissan launches the third generation of its most popular model. 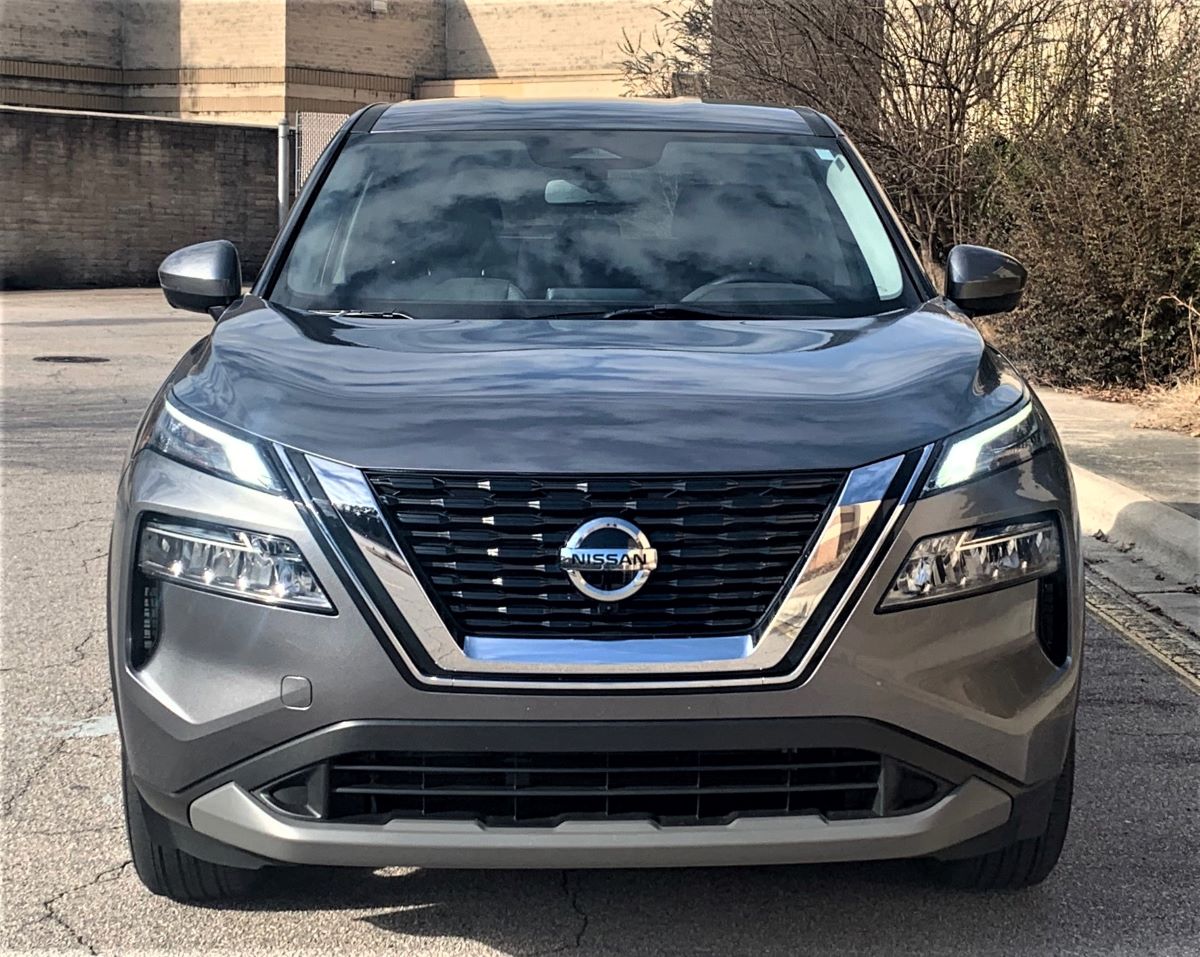 Nissan was late in bringing its Rogue crossover utility vehicle to the market, but it certainly has made up for lost time. New in 2008 and overhauled in 2014, the 2021 Rogue launches the third generation of this compact model. This all-new vehicle is more sophisticated and stylish than before, and comes outfitted with advanced safety equipment and technologies.

The Rogue Sport is a unique model and is marketed separately. 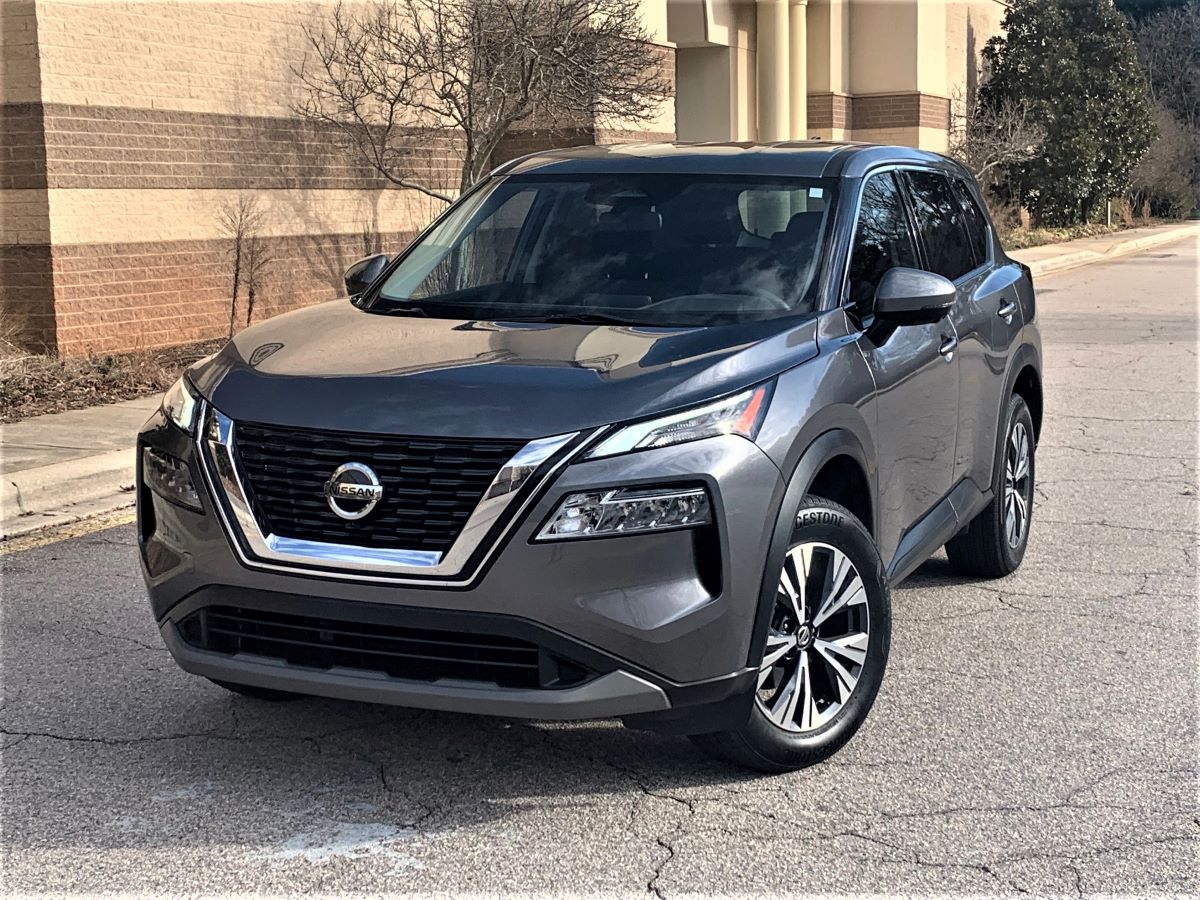 You probably won’t notice it, but the new Rogue is slightly shorter and sits lower than the previous model. Credit a more squared-off layout and a powerful presence with making the new model seem bigger and burlier than before.

One of the most significant changes involves the front fascia. Certainly, the “V motion” or horse-collar grille is still there, but the lighting elements surrounding the now slightly larger and placed higher grille have changed.

Specifically, Nissan placed LED daytime running lights at the top of the fascia. These lights wing out to the sides almost like eyebrows. Beneath that and separate from the LEDs are the headlights. We think these changes impart a more aggressive look, which absolutely sets it apart from most models in its class.

Strong shoulders, a high beltline, flowing character lines and body sculpting mark the profile. Depending on the trim, you’ll find contrasting wheel well finishers and rocker panel molding also apparent. Notably, the Rogue’s beltline kicks up just beyond the rear doors, forming a zig-zag roof pillar design. From the rear of the vehicle, the liftgate is topped by a spoiler. Wide wraparound rear lights supply a sporty touch. On all-wheel drive models you’ll find underbody cladding, but don’t be fooled: the Rogue isn’t a true off-roader, although well-trodden paths shouldn’t be much of a problem.

Nissan offers the 2021 Rogue in several color choices. You can also choose various two-tone arrangements with the body having one color and the roof a second color. That second color, though, is always Super Black.

Lastly, make your move to the Platinum edition and all the exterior enhancements spill over. It’s the interior and tech offerings that change the game here. Read on and we’ll explain what they are. 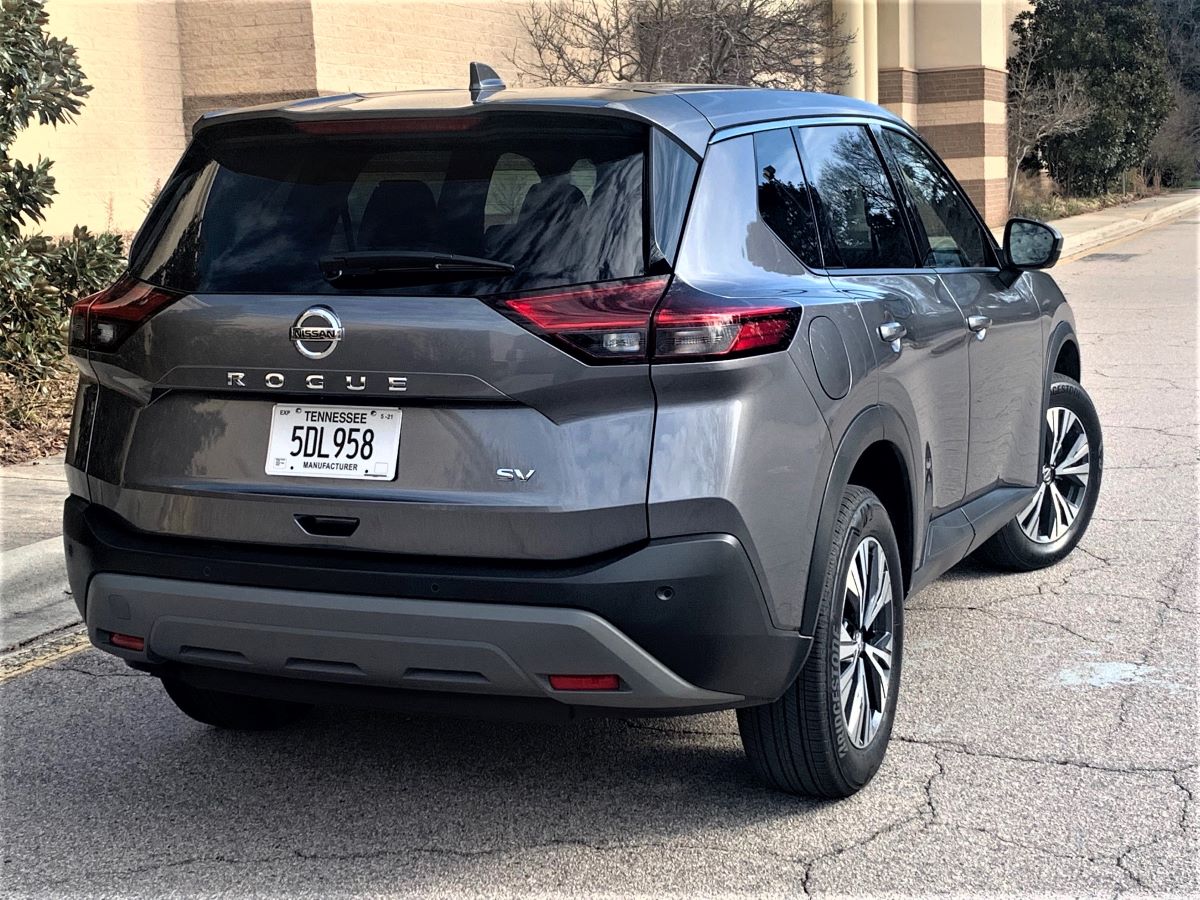 For starters, the interior reflects an improved use of space. Indeed, the cargo volume now measures 74.1 cubic feet with the rear seat folded thanks to a tiered storage floor with a two-tier console. Its not that the interior is larger, is that the room is better utilized. Consequently, the Rogue seems larger and it’s not.

Like other competitors, the Rogue seats five, but is ideal for four adults. Sure, someone can squeeze in the middle spot in the back seat, but not without making the seats for the outboard sitting people uncomfortable. As it stands, the rear headroom is fine for adults, but the legroom is tight, especially if the front seats are pushed as far back as they can go by the driver or front passenger.

Most of the cabin is clean and orderly. We like the center console with the touch-screen display sitting up on the dashboard with the usual cabin and climate controls underneath. Directly beneath that is the start/stop button, two USB ports, and a 12-volt outlet. A sizable open storage compartment is located at the base of the stack with the transmission shifter, two cup holders, along with switches for the electronic parking brake, hill hold, and the drive mode.

Speaking of the transmission shifter, it takes some getting used to. All controls are managed on the face of the shifter, requiring the driver to shift to reverse, neutral, and drive/manual my moving the lever forward or back. “Park” is managed by pressing a button on top of the shifter – this is where you can forget to do that, thinking you’re moving the lever to park, when you need to push it instead. 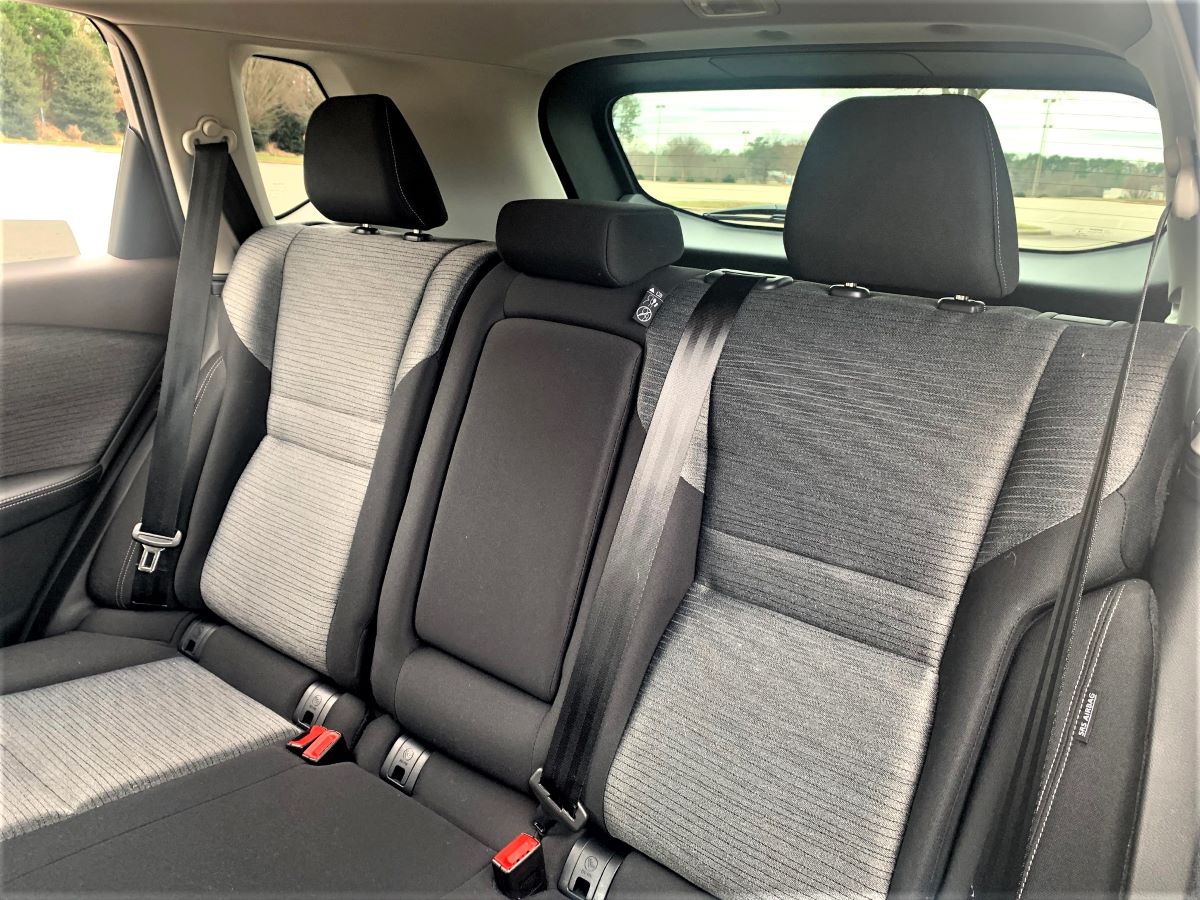 Immediately behind the console and between the seats is a deep storage compartment/armrest. This one opens on its hinges and has a tray inside. Deep and wide door pockets, an overhead console, and a fold-flat floor behind the first-row seats are other standout features of the 2021 Rogue.

We found the front seats comfortable and supportive. Nissan wraps them in close with both the S and SV trims, imitation leather with the SL, and will semi-aniline leather in the Platinum trim.

At the SL level, this model gains a 4-way power front-passenger seat, remote folding rear seats, leather seating, the rear sunshades, three-zone climate control, and the remaining items in the SV’s Premium Package. The SL has its own Premium Package, which is comprised of tech and safety items mostly.

As expected, Platinum trim pulls out all the stops. Specifically, this trim has interior accent lighting, the semi-aniline leather seats, and heated rear outboard seats. Moreover, this trim incorporates a digitally dashboard with fully digital gauges – that’s something that was nearly exclusive to luxury models until recently. 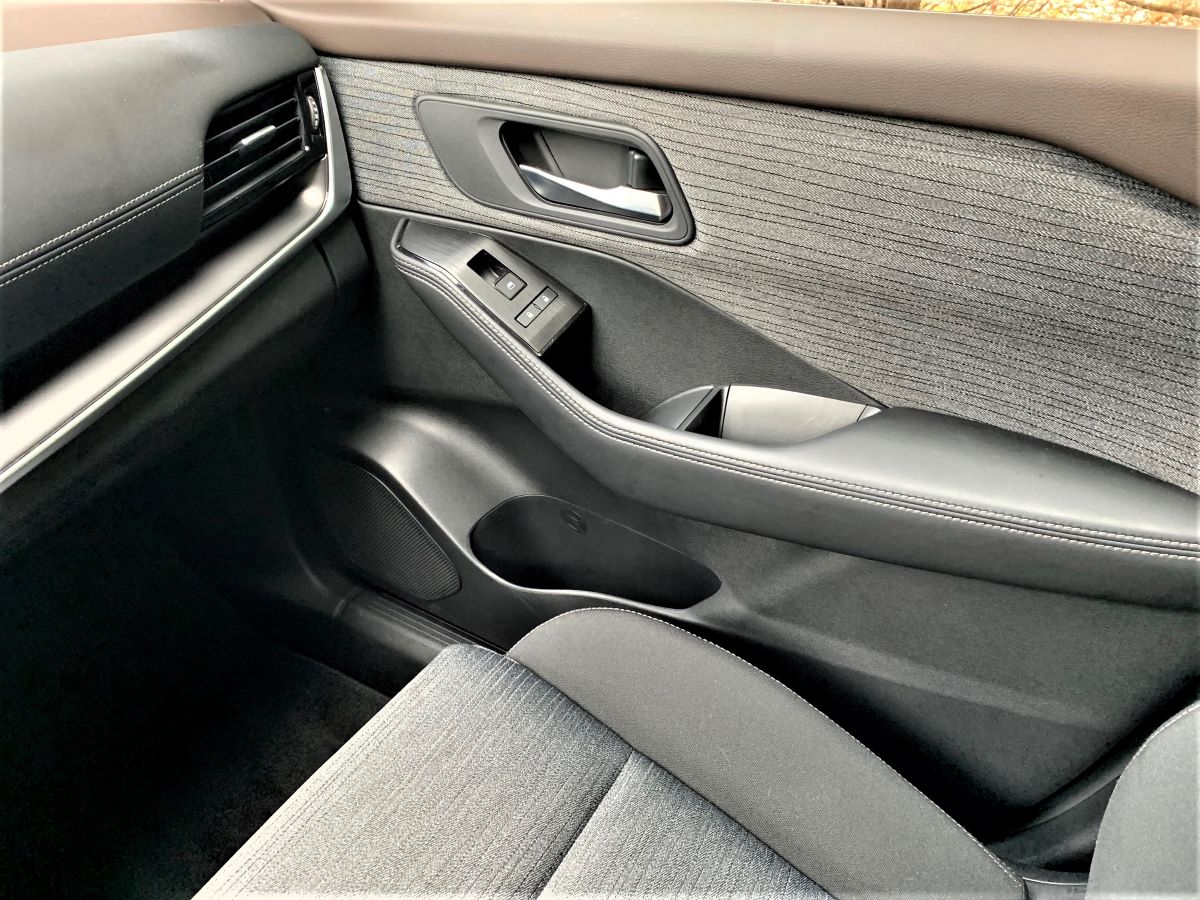 Although the Rogue comes well equipped in the tech department, moving away from the base S trim brings in better equipment. That said, you’ll get a 4-speaker audio system and 8-inch touch-screen display, voice recognition, Apple CarPlay and Android Auto smartphone integration, Bluetooth, satellite radio, and two USB ports.

Move up to the SV and Nissan adds two speakers and brings in connected services, a Wi-Fi hotspot, and two additional USB ports. A 9-inch touch-screen display, navigation, a Bose audio system, and wireless Apple CarPlay integration are bundled within an available package upgrade on the SL or included with the Platinum trim. The top trim also benefits from the digital dashboard with fully digital gauges, a head-up display, and a wireless charging pad. 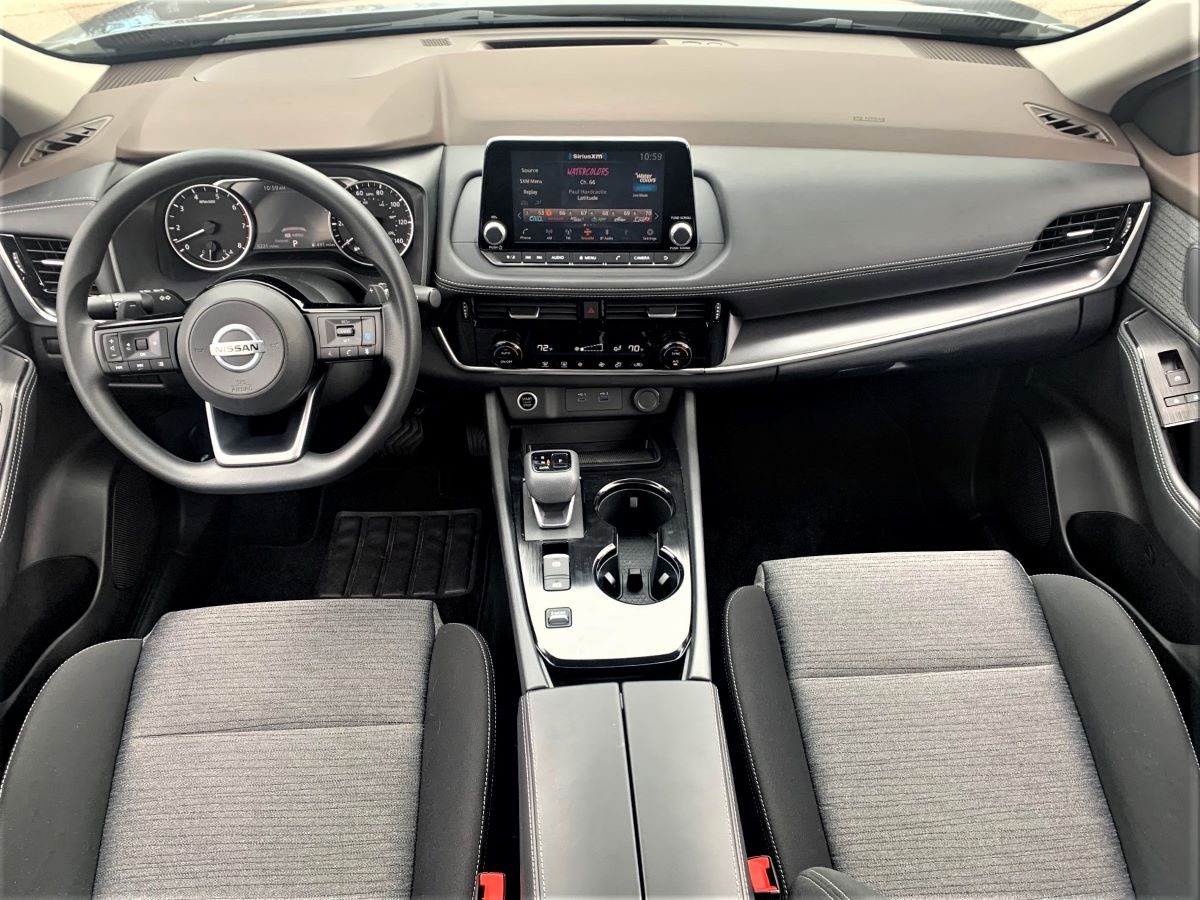 We’re impressed by the long list of driver-assist technologies offered in the 2021 Rogue, including many features offered across all four trims.

Move up to the SV trim and it gains ProPILOT Assist, which is Nissan’s semi-autonomous driving system. Other features added to the SV trim include lane intervention, blind-spot intervention, and an around-view monitor. Choose the SL trim and Navi-Link is added to the ProPilot Assist under a package upgrade. Also available is a front and rear sonar system (side sonar is added with the Platinum) and traffic sign recognition.

As for safety scores from the Insurance Institute for Highway Safety (IIHS) and the National Highway Traffic Safety Administration (NHTSA), those are pending. We expect the 2021 Rogue will be tested by early spring and it should receive high scores from both entities.

With all the other changes made to the Rogue, one thing remains constant: a 2.5-liter four-cylinder engine paired with a continuously variable transmission. This is the same powertrain combination offered since the Rogue made its debut, but it has seen some changes in performance since.

Indeed, the latest figures show the engine now makes an even 181 horsepower and 181 pound-feet of torque. That’s up from the 170 horsepower and 175 pound-feet of torque delivered in 2020. And yet the engine provides no better than average power even though the CVT in Sport mode ups engine revs accordingly. It simulates seven forward gears when operated in manual mode.

One question that seems to regularly come up with Nissan shoppers and something I’ve personally answered time and again is this one: why does Nissan use a CVT (gearless) instead of an automatic transmission? The answer is quite simple: fuel efficiency. Depending on the model, a CVT will yield better fuel economy than a corresponding cogged automatic. We typically see savings averaging around 3 mpg and that’s not a small thing, especially when the automaker is attempting to maintain a high corporate average fuel economy (CAFE). Consumers also benefit by saving money. 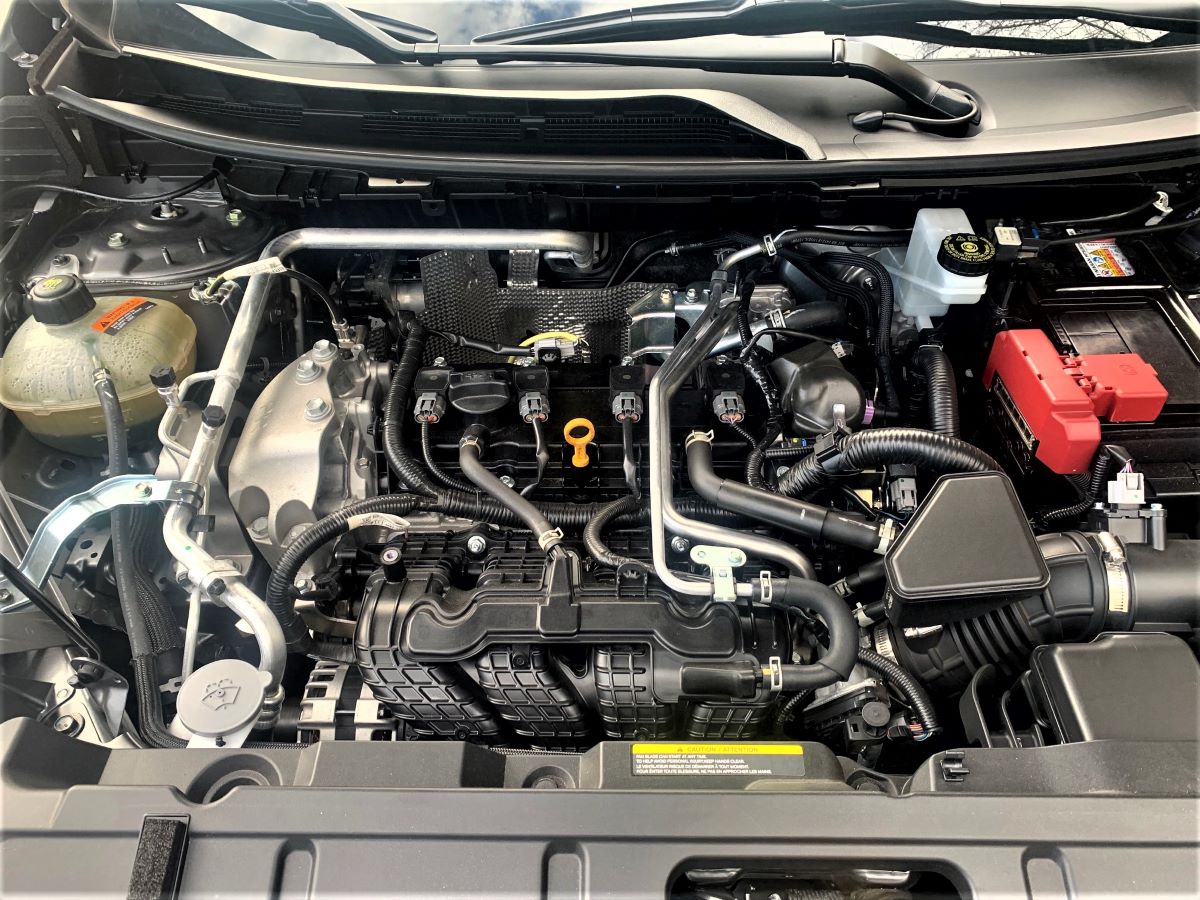 Importantly, Nissan has been at the forefront of CVT development with more than two decades of experience under its belt. Where earlier models had the unmistakable “pulling” effect as the vehicle picked up speed, Nissan utilizes a vehicle’s computer system to lower the rpm curve under certain points such as hard acceleration. No longer might you feel the engine is about to explode when pressing the pedal to the metal.

We might wish for another engine option, but there isn’t one at this time. A hybrid variant is likely to reappear, but it isn’t likely for this model year.

A more rigid Rogue than ever before means this Rogue rides better than ever. Nissan uses a rack-mounted electric power steering system to supply a more direct steering feel along with improved handling, which is noticeable when tackling twisty roads and while cornering. This doesn’t mean that body roll has gone away – it simply has reduced it somewhat. Lastly, we found the current iteration is quieter than all previous Rogue models and that’s a good thing. 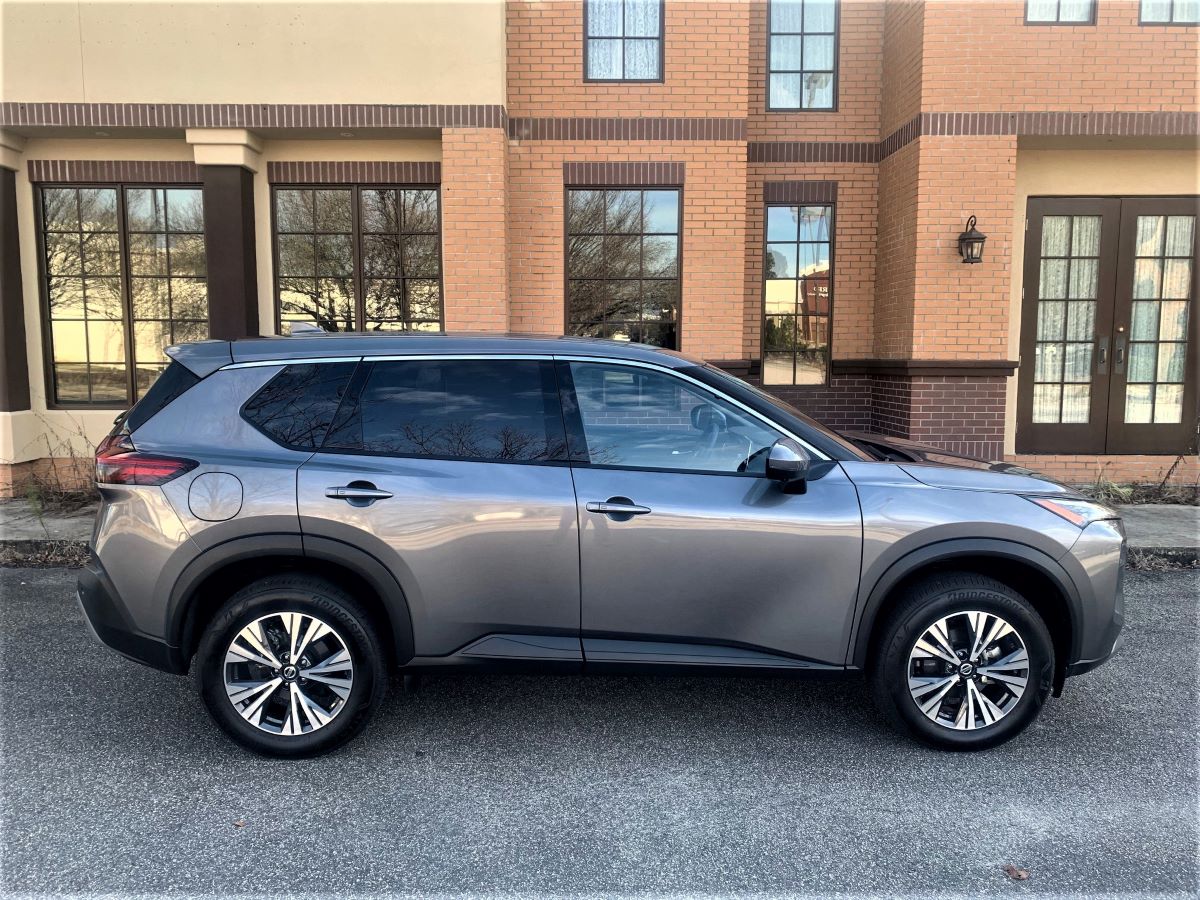 Every manufacturer has a presence in the compact SUV segment. As such, the list of competitors is long and impressive.

The two top sellers besides Nissan are the Toyota RAV4 and the Honda CR-V. The domestics are well represented too with the Jeep Compass, Ford Escape, Buick Envision, GMC Terrain, and the Chevrolet Equinox offered.

Other models to consider in this segment include the Mitsubishi Outlander Sport, Volkswagen Tiguan, Subaru Forester, Hyundai Tucson, and the Kia Sportage. That’s a dozen direct competitors for the Nissan Rogue and we don’t include similar non-utility vehicle models such as the Kia Soul.

Nissan is one of the few manufacturers that occasionally sends out press fleet vehicles that aren’t always in top-trim guise. Consequently, we get to evaluate models we think consumers will like in the trims they’ll consider.

We like the Rogue SV. Ours was front-wheel drive and that’s how we’d order it. That said, if you live in snow county, then opt for all-wheel drive: it’s a $1,400 upgrade. We’d also choose the Premium Package, a $2,660 upgrade, bringing in the features mentioned earlier. Your total price comes in at exactly $30,000, plus another $1,095 for the destination charge. This is a reasonable cost for a compact SUV. 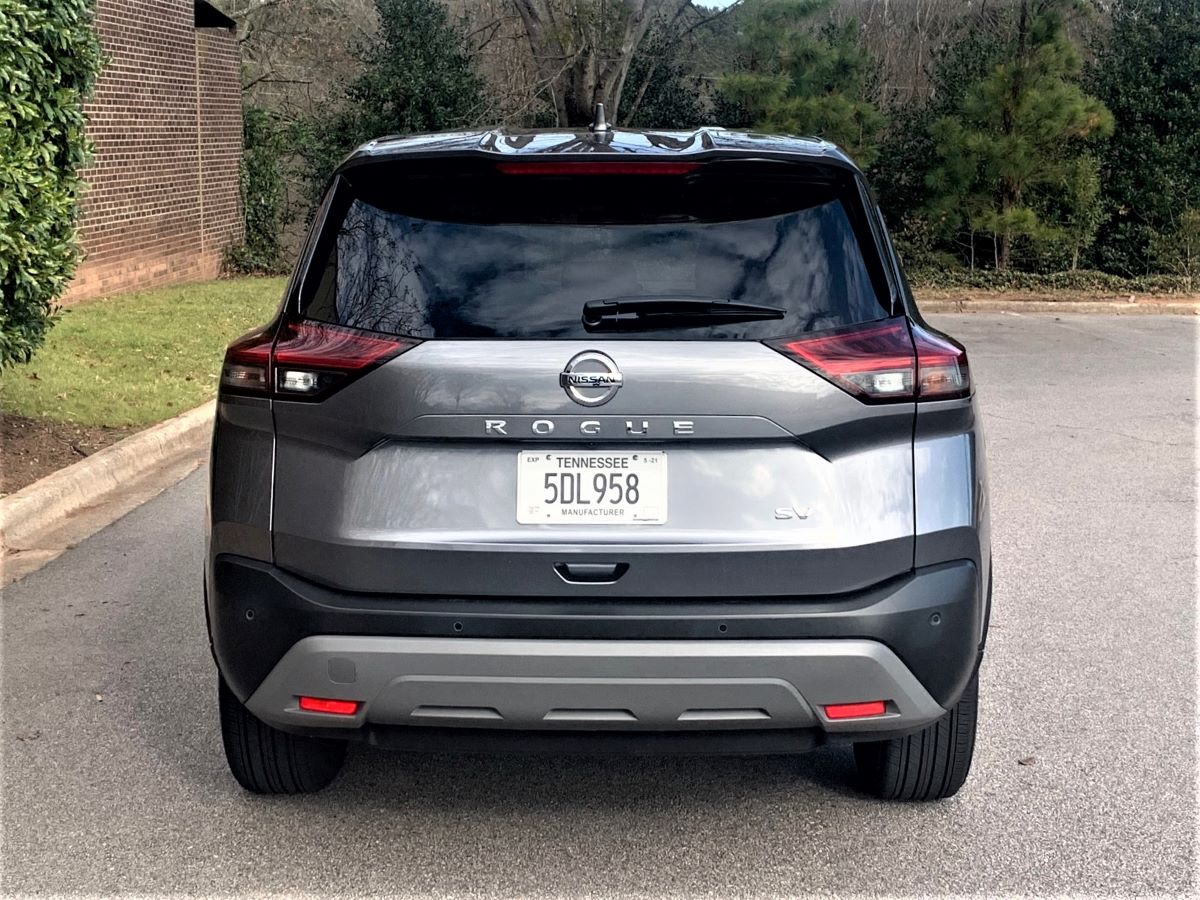 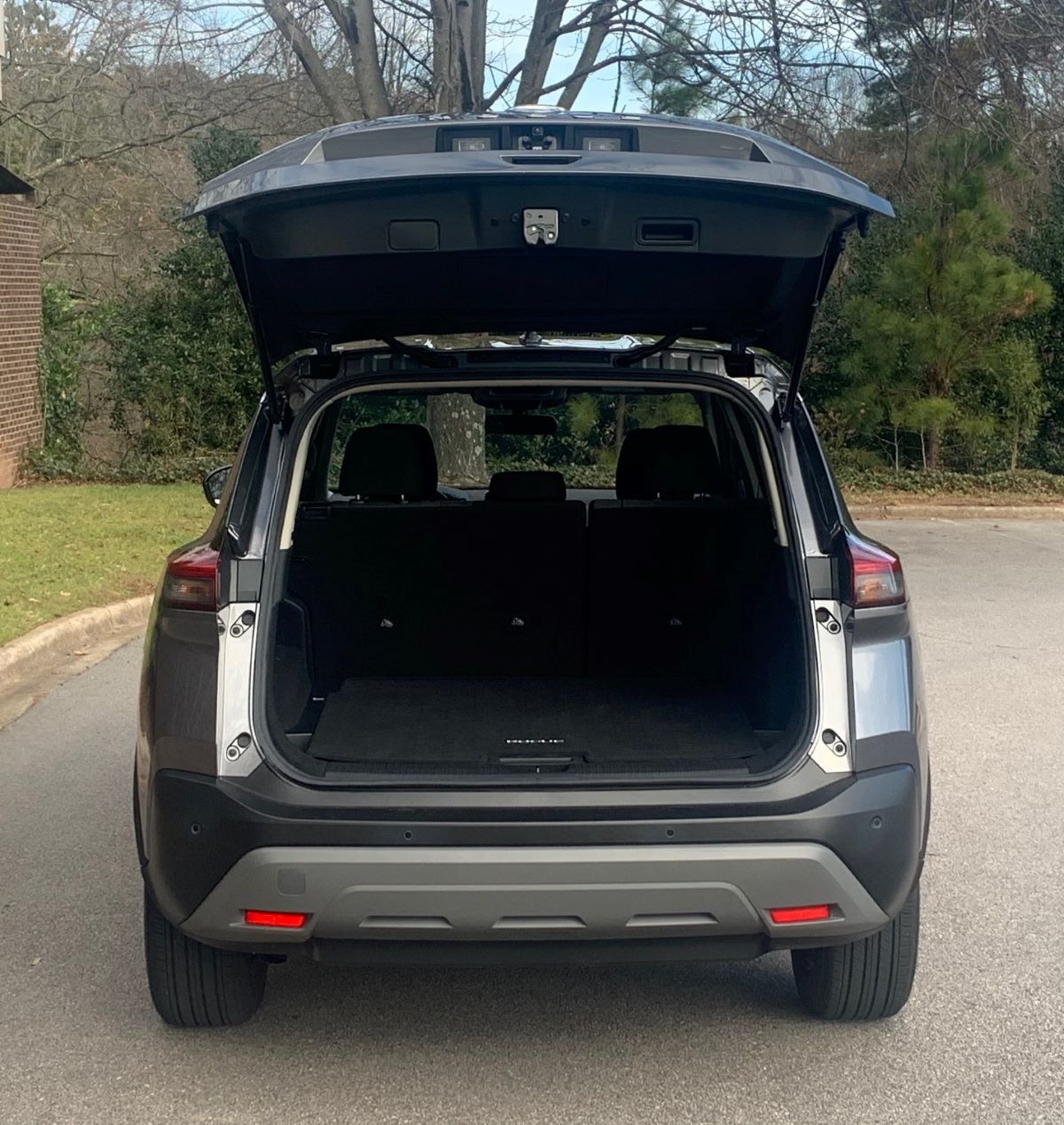