Nissan has a new Pathfinder arriving this summer, the latest version of its midsize 7- or 8-passenger crossover utility vehicle. After an 8-year run, the previous-generation model has come to an end, although no 2021 model year Pathfinder exists.

The new model has a more rugged look, supplies expanded passenger-carrying options, and gains a new transmission. It’s the largest of five Nissan crossovers, slotting between the Murano and Armada SUV.

Last week, Nissan debuted the all-new 2022 Pathfinder (and the Nissan Frontier). The new model launches the Pathfinder’s fifth-generation or its second one as a crossover. Previously, the Pathfinder shared its bones with the Frontier before making the transition to crossover-land.

Absent from our preview is certain details about price, trim levels, interior measurements, curb weight, and fuel economy. We’ll get that information nearer to the 2022 Pathfinder’s release, then update the specs accordingly.

The previous-generation Pathfinder offered room for eight in a 2-3-3 seating alignment across three rows. That’s the standard configuration for the new model, but a 2-2-3 option now becomes available, with captain’s chairs replacing the middle-row bench seat. Not only will the middle row have more comfortable seats, but the third row will seem less confined. Further, a second-row center console may be removed without tools.

Other highlights of the interior include a fresh design, a variety of cloth, leather, and upgraded hide choices, brushed bronze metallic accents, and new ambient lighting. Nissan says the interior is quieter thanks to acoustic laminated front glass, thicker second-row glass, and increased door and floor isolation. Moreover, the sound comfort benefits from a 60-percent increase in engine noise absorption.

The Pathfinder has long offered all the cutting-edge technologies we expect in a family-oriented vehicle. Indeed, the newest model advances that mission in ways that are certain to please.

For 2022, an 8-inch touch-screen display is standard and a 9-inch screen is available. Most models feature a 7-inch instrument panel display, but an available 12.3-inch digital dashboard comes with the top-trim model. Also, a 10.8-inch head-up display can be had.

Most trims will also come with Nissan’s ProPILOT Assist with adaptive cruise control. This system brings in elements of autonomous driving, with steering wheel inputs assisting the driver as he or she guides the vehicle. It’s ideal for limiting fatigue in heavy traffic or while taking long trips.

Is Nissan dismissing its continuously variable transmission? A CVT has played an important role in the company’s many models, with all four-cylinder engines and most V6 applications paired with one. For many years, the CVT has offered a noticeable edge over automatic transmissions, but that gap has since narrowed and, in some cases has closed altogether.

Not everyone is familiar with CVTs, but the best way to describe them is that they’re a type of automatic transmission, but with a strong difference. For example, where an automatic uses gears to send power to the wheels, the CVT uses a pulley system. Early CVTs were notorious for causing engines to whine under hard throttle, with a stretching rubber-band feel the complaint of many drivers. Moreover, some of the earlier CVTs were problem-plagued, wearing out sooner than they should. Nissan has done a stellar job of standing behind the repairs, extending the transmission warranty, and employing tech improvements for durability.

Since making the transition from a truck-based SUV to a crossover SUV for the 2013 model year, the Pathfinder has utilized a CVT to work with its 3.5-liter V6 engine. But that’s changing for the fifth-generation Pathfinder. A 9-speed automatic transmission rolls out, one we became familiar with in the 2020 Frontier with its 3.8-liter V6 and the 2020 Titan powered by a 5.6-liter V8.

We found the 9-speed a noteworthy match in the two earlier models and expect it’ll provide clean and confident shifting in the 2022 Pathfinder. Besides the powertrain, Pathfinder shoppers have a choice of front- and all-wheel-drive models, the latter acting more like a four-wheel-drive system with direct coupling, which sends torque transfer to the clutch pack using oil pressure and that’s ideal for moving forward in low-traction conditions. The Pathfinder 4WD also benefits from a seven-mode selector — Standard, Sport, Eco, Snow, Sand, Mud/Rut and Tow.

One other important point about the Pathfinder is worth noting: it maintains its class-leading 6,000-pound towing capacity, achieved with the optional tow package. Otherwise, this model delivers a respectable 3,500-pound trailering capacity.

We think the 2022 Pathfinder is promising. It makes changes where needed, while giving customers what they expect in a family vehicle. Swapping out the CVT for the automatic transmission will likely help sales and may signal to Nissan to make changes to additional models.

All in all, we’re looking forward to the next Pathfinder and will share a full review once Nissan sends one our way. 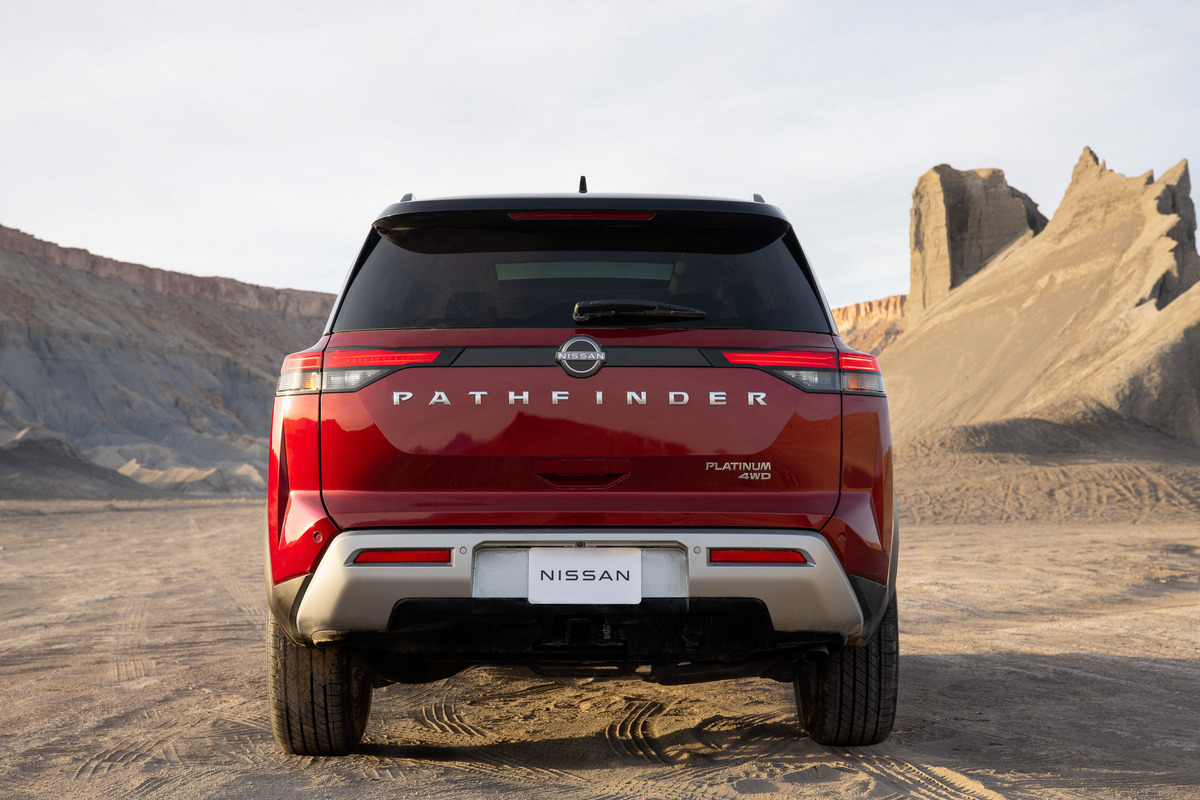 See Also — Behind the Wheel of a 2019 Nissan Pathfinder