Your author is not a car guy, unless a borderline unhealthy obsession for old Swedish cars that need to be held together by a makeshift exoskeleton counts.

And your author has yet to develop a taste for electric cars. He thinks they sound creepy. They sneak up on you like oversized golf carts. He prefers the mature feline hum of a 30-year-old diesel engine, the kind of machine that says we ain’t getting there fast but not much is going to prevent us from the journey.

But he is also resigned to the fact that the EV (Electric Vehicle) is that way of the future, much like eating the occasional meat made out of plants. And just as the odd one of those can actually be better than the original, the next generation of electric vehicles holds infinite promise.

The problem is that some of them have been nothing but promise. This week, Ford announced a fully EV version of North America’s best-selling vehicle, the F-Series pick-up truck.

Ford knows how to make trucks look impressive. They did not miss a beat here.

So where is the Tesla Cybertruck, that promised to revolutionize, well, trucks?

It is 550 days since Elon Musk held this Cybertruck press briefing, showing off the next-generation features and, it seems, bulletproofness, of Cybertruck. 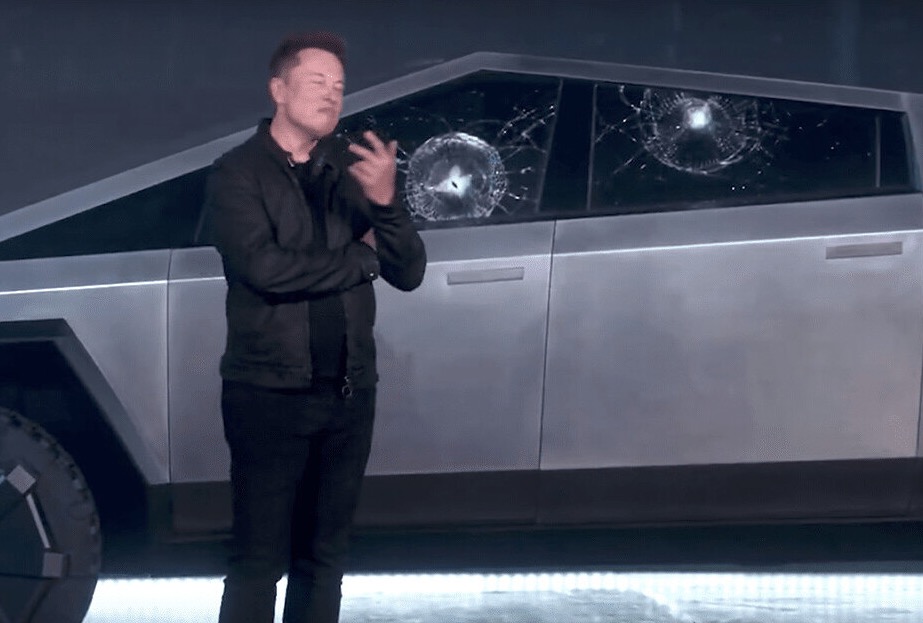 But in those 550 days, not a single Cybertruck has been built.

While the announcement of the Lightning has many fans lauding the emergence of Ford on the EV truck scene, some argue that the better value will be the Cybertruck.

That may very well be accurate but there is a very large but: the actual starting price for a not-very-loaded Lightning will be right around $40,000, right in the wheelhouse of the American truck buyer. And boy do we buy trucks.

Ford has done one thing exceptionally well over the years: build cars and trucks. In fact (maybe sit down before you read this fact) Ford F Series pickup trucks are second only to iPhones in sales.

So we know the Lightning will actually get built.

While Tesla and their legion of followers (“Muskrats” is your author’s preferred descriptive term of choice when their online behavior is less than stellar) are great at promoting the still-fictitious Cybertruck, the Lightning release announcement is garnering reviews like this one, from Input:

“No, we haven’t driven the F-150 Lightning yet, but yes, we’re going to call it one of the most important steps in America’s move to electrification nonetheless. The gas-guzzling F-150 is America’s favorite truck. It has been for more than four decades. The Lightning looks just like it, but promises better acceleration off the line, the option to keep your house powered in a blackout, and has all of the brand recognition and loyalty Tesla’s Cybertruck will need generations to accrue (assuming it does at all). Ford’s calling the F-150 Lightning “the truck of the future,” but what’s more exciting is it might turn out to be “the truck of the present” instead.”

This is really the issue: 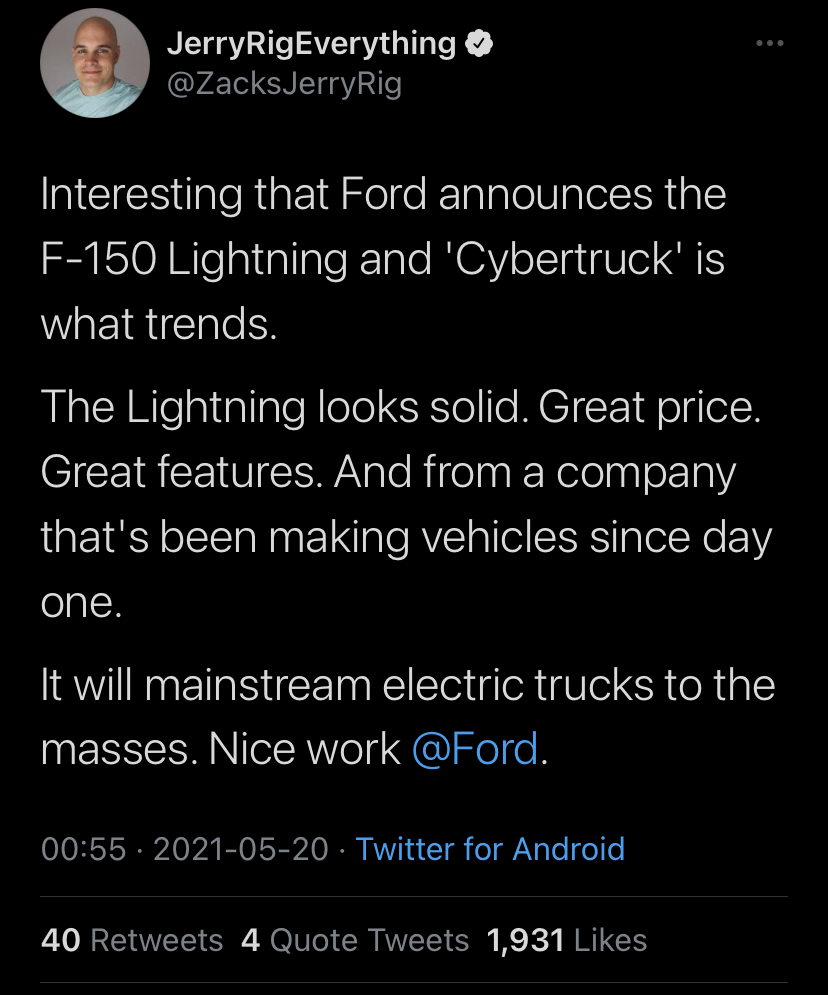 Tesla knows that part of their game is trading on speculation. Their Cybertruck sales contract is remarkably well done, essentially promising nothing from a legal perspective.

“You understand that Tesla may not have completed the development of Cybertruck or begun manufacturing Cybertruck at the time you entered into this Agreement and so we do not guarantee when your Vehicle will actually be delivered.”

Further, if you think that putting down your $100 and pre-ordering the Cybertruck gives you any legal rights aside from an ability to one day being able to actually configure and order your truck, you’re also wrong:

“Limitation of Liability. We are not liable for any incidental, special or consequential damages arising out of this Agreement. Your sole and exclusive remedy under this Agreement will be limited to reimbursement of your Pre-Order Payment.”

John Lawlor, a Fort Lauderdale personal injury lawyer, offers this sobering perspective on the wisdom of not rushing a new truck to market, no matter how much the public is demanding it.

“As someone who has represented many people injured by trucks, it makes sense not to rush a new design to market. Safety always has to be a priority for the manufacturer, especially when there’s an expectation that so many of these new vehicles will be on our roads.”

The good news is that the Cybertruck doesn’t seem to be rushing. This week’s news might light a fire under Tesla’s production process, as Ford’s announcement represents what Tesla likes the least – a massive incumbent drafting behind them in the home stretch of a race. With that comparatively low base price, Lightning is going to sell like electric-powered hotcakes. And while Tesla critics point out that it will be 2022 until Ford can get the Lightning to market, whether Tesla can get you behind the wheel of your Cybertruck before then remains to be seen.

Image by GGBot from Pixabay

0 150
Craigslist Car Scams and How to Avoid Them

Author: Aron Solomon
Aron Solomon is the Head of Digital Strategy for Esquire Digital and an adjunct professor of business management at the Desautels Faculty of Management at McGill University. Since earning his law degree, Solomon has spent the last two decades advising law firms and attorneys. He founded LegalX, the world’s first legal technology accelerator and was elected to Fastcase 50, recognizing the world’s leading legal innovators. His work has been featured in TechCrunch, Fortune, Yahoo!, ABA Journal, Law.com, The Boston Globe, The Hill, and many other popular publications.
Website