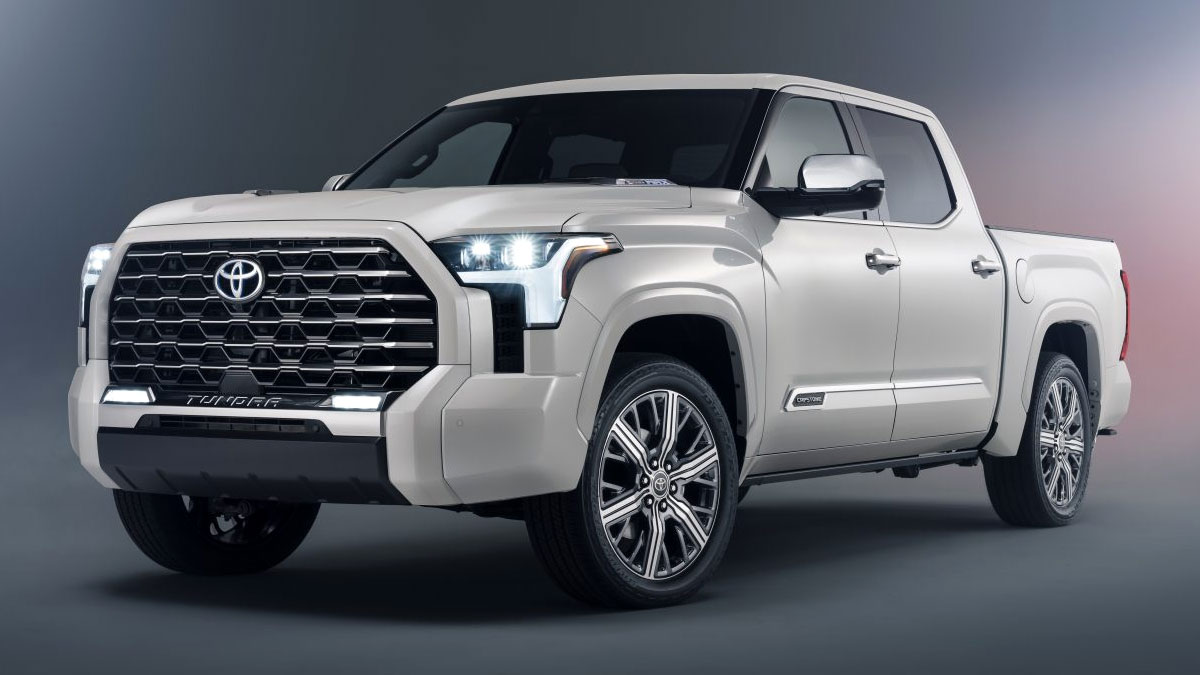 With the launch of its all-new Tundra pickup truck model in 2022, Toyota made it clear that it was staying put in a segment dominated by domestic manufacturers. The third-generation Toyota Tundra is here, a more formidable competitor than before.

But the one thing the Tundra has lacked is a luxury-grade trim. Indeed, GMC has Denali, Ram offers the Limited, and Ford supplies the Platinum trim. All three plus the Chevrolet Silverado High Country are bona fide models with a luxurious pedigree.

For Toyota, the Tundra hasn’t pushed the luxury envelope…until now. Arriving late for the model year is the Toyota Tundra Capstone, a model that clearly raises the Tundra’s appearance to a new level.

The 2022 Toyota Tundra Capstone is offered as a CrewMax (full four doors) and a 5.5-foot length bed. Moreover, it is exclusive to the iForce MAX powertrain, an advanced hybrid system that appears in early spring.

The Apex of Tundra Trims 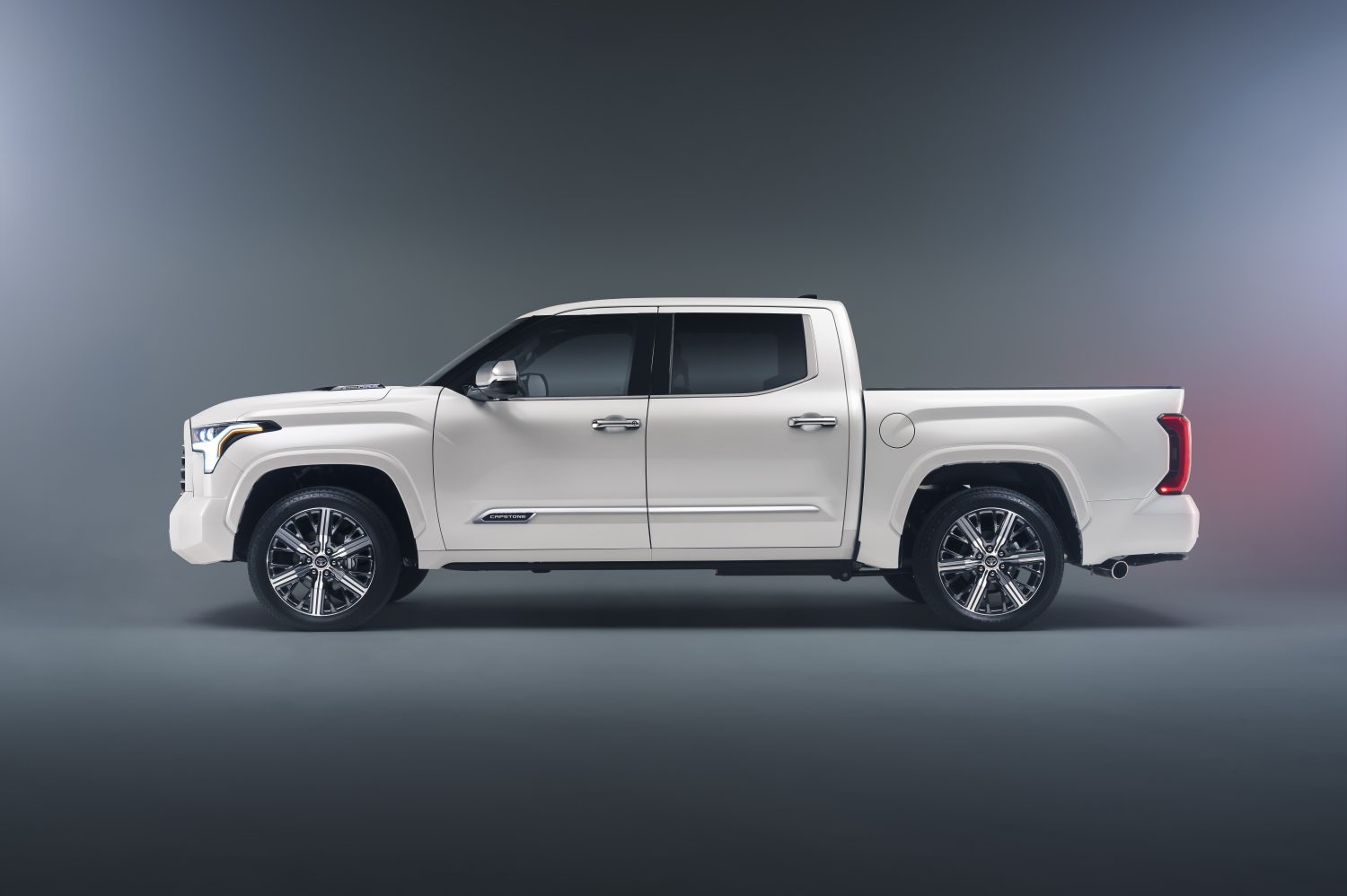 The special trim also features automatic deploying running boards. Inside, the upscale cabin features semi-aniline leather-trimmed seats. In particular, they are luxury-grade with a sophisticated perforation and a Capstone-only black-and-white hue pattern.

The Capstone’s center console and passenger-side dashboard are accentuated with genuine Dark American Walnut with an open-pore veneer that underscores the wood texture. On the dashboard, the Walnut marquetry encompasses a Capstone emblem that lightens when the doors are opened. 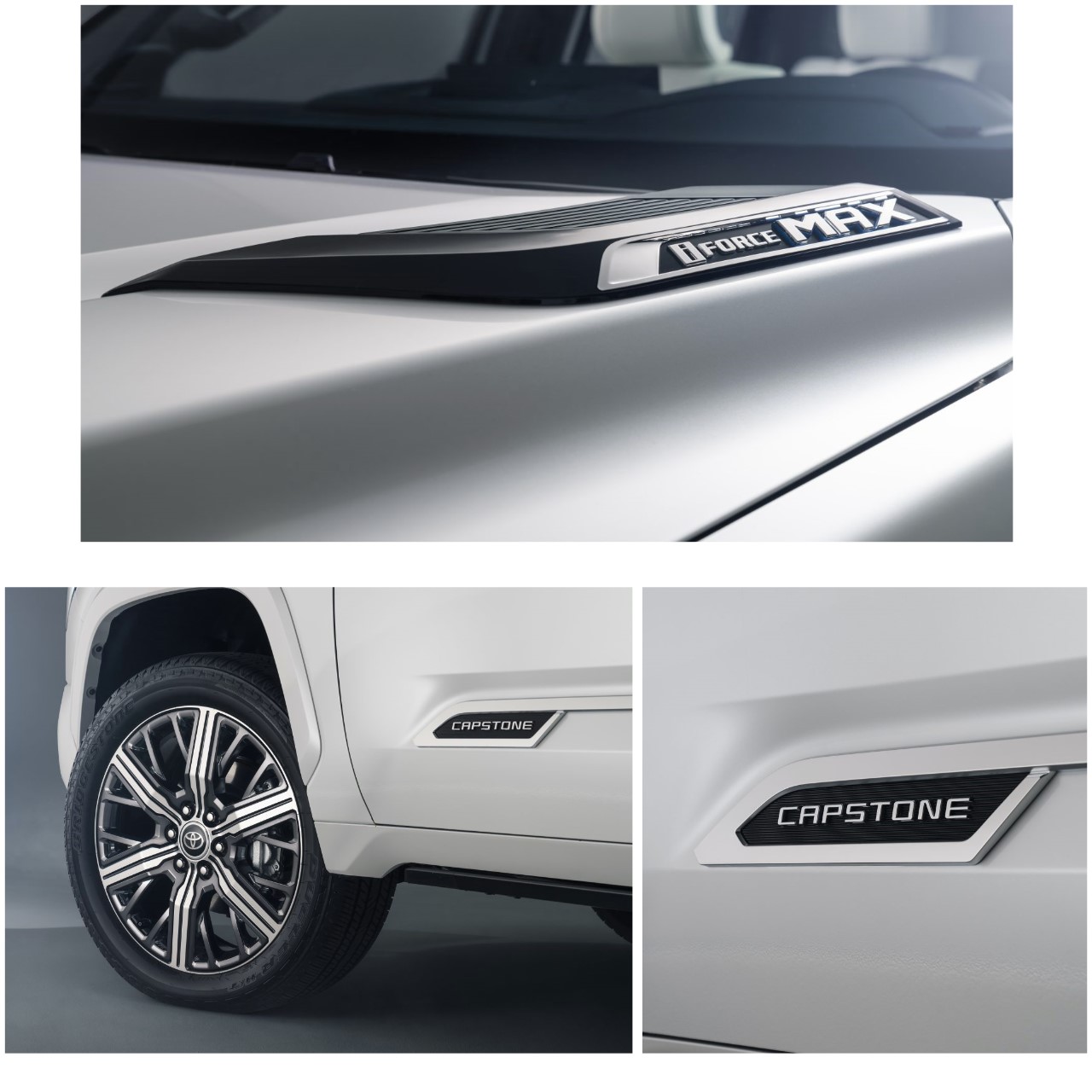 A panoramic moonroof is included with this model, yet another way the Tundra sets itself apart. To achieve a calmer interior, the Capstone is the first Tundra trim to include acoustic glass on the front doors for more exterior sound dampening.

Beyond the cushy leather seats, the Capstone has a leather-trimmed heated steering wheel and a 12.3-inch digital multi-informational display. A 10-inch color head-up display is included with this trim. 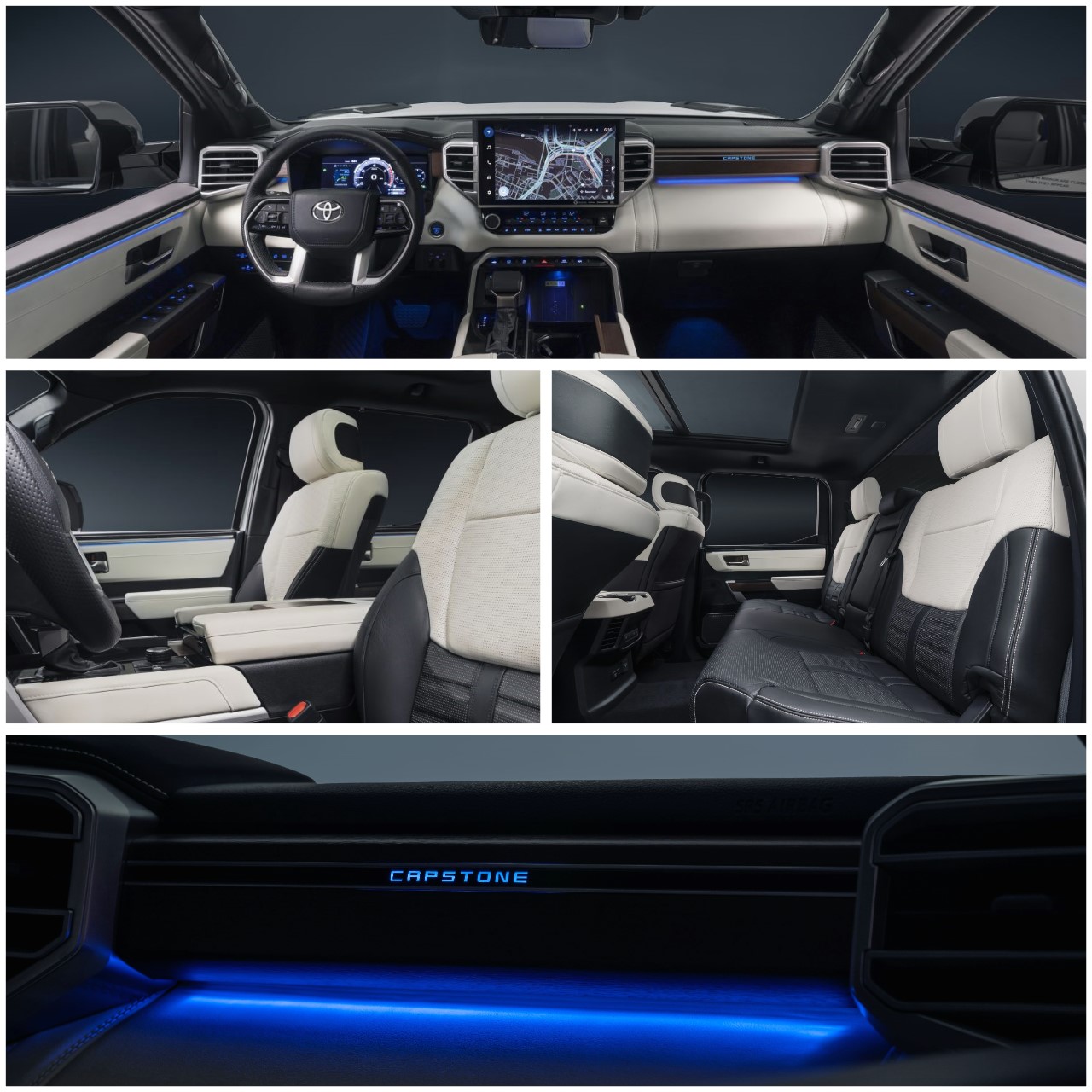 On the tech front, a 14-inch color touchscreen display is standard and works with Toyota’s new audio multimedia system, which was designed in-house by the company’s Lone Star state Connected Technologies group. Toyota says that the new system presents an enhanced user experience due to new sight, touch, and voice activation.

Similar to the way Siri works, addressing the system by saying “Hey Toyota” rouses the system for voice-activated instructions. These include directions, a search for nearby places of interest, audio system management, climate control administration, and other features.

On the safety front, the 2022 Tundra comes with blind-spot monitoring, rear cross-traffic alert, and front and rear parking assist with automatic braking. Other included features are automatic high beams, a pre-collision system with pedestrian detection, lane control, and adaptive cruise control with full stop and go. A rear-seat reminder is new this year and standard on all trims.

Under the hood are a 3.5-liter twin-turbocharged V6 engine and a hybrid drivetrain. This system combines to deliver a robust 437 horsepower and 583 pound-feet of torque. Power routes to the wheels utilizing a 10-speed automatic transmission.

Other figures of note include this model’s 1,485-pound payload capacity and 10,430-pound towing strength. 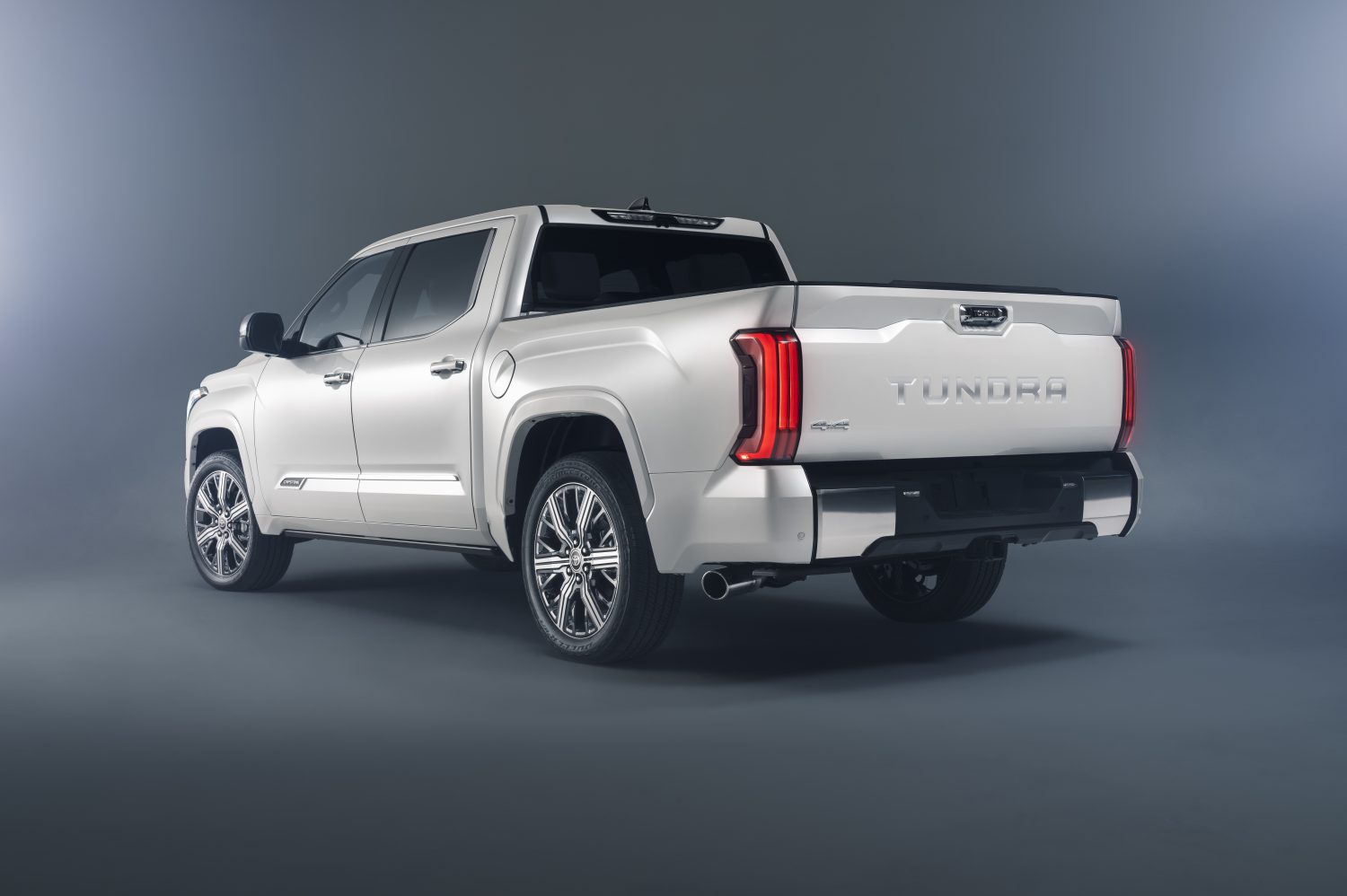 Toyota has not released Capstone pricing yet, but we see this model topping $70,000, perhaps approaching $75,000 when all is said and done.

That’s a high price point for any full-size pickup truck, but judging how well GMC, Ford, Ram, and Chevrolet have done with their respective high-brow trims, Toyota should have little problem filling orders.