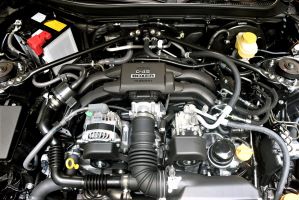 Every engine has a V-engine layout to some degree. The regular in-line engines have a cylinder bank angle, that’s the angle between two nearby connecting rods, of 0 degrees, hence the name of “in-line”. Consequently, we can find 60-degree angle V-engines, 90-degree, 15-degree in the case of VR engines, or 180-degree ones. Due to simplicity, we do not mention “180-degree V engines”, we mention flat engines.

Now we have the obvious question: what does it matter if they are flat or in-line? Surprisingly, this configuration changes numerous features, either as improvements or downsides.

The significant and noticeable change is regarding its noise, vibration, and harshness characteristics. A boxer engine is smooth and well-balanced. Seeing how each piston is symmetrically opposed to its pair, if a force is applied on one of them then the other piston will also generate a similar, but smaller, force going in the opposite direction. Therefore, these forces chiefly cancel each other out.

Moreover, seeing how engines have an even number of cylinders, each pair will cancel each other out, so the resulting vibration is not particularly noticeable. If we are talking about a boxer-four, then we do not have any rocking motion either, translating into a subtle-running engine. Notwithstanding this, boxer-six or larger ones do have a certain rocking motion when seen from above and engineers must design some form of counterbalance into the engine to counteract this. Even so, the vibration generated by a boxer engine is so insignificant that counterweights are not necessary, which also translates into a lighter rotational mass inside the engine (1).

We still must discuss noise, more precisely the famous boxer rumble. Remember that we are describing a particular V-type engine, so each side has its own valvetrain and a more complex intake/exhaust header design. Due to the 180-degree layout, designing the exhaust headers is different than on any other engine type, resulting in one side being shorter than the other side. Thus, the gasses from each cylinder will travel substantially different distances, developing a sort of audible gap in between each firing stroke. The header design is also simple compared to those found in regular V-type engines or in-line engines, by not having to descent from the camshaft to the car’s floor as much, which also assists the unique sound note.

Besides noise, vibration, and harshness, we also need to consider the technical particularities of a flat engine or boxer engine. Designing the cylinders so far apart from one another allowed engineers to develop a honeycomb structure around the engine, allowing them to forego water cooling and opt for air cooling. This resulted in a significantly simpler engine design, without a water pump or coolant paths inside the block.

Moreover, having the engine so short meant that now there’s significant room above it, enough for a better flowing intake design, a bigger radiator, more room to play with auxiliary components, and potentially a slicker design. Last, but certainly not least, positioning the engine’s bulk so close to the ground shifts the car’s center of gravity downwards, resulting in better dynamic characteristics across the board.

The Downsides of Boxer Engines

Boxer engines have their downsides as well. We are talking about a V-type engine and, consequently, it has two camshafts, two intake headers, and two headers minimum. Following suit, the engine has more complex timing, with multiple parts that could fail.

Changing anything regarding the engine’s top-end is a major hassle since the engine typically requires demounting from the car. Having the engine so low to the ground competes with the suspension room and driveshaft room. Oil lines are more difficult to design and implement, and the same can be said about the coolant circuit. A myriad of puny issues for an engine that nowadays is unique (2).

There are only a few manufacturers that still use boxer engines. Back then, plenty of producers employed them, from the first Volkswagen Bettle, the first Fiat 500, the Citroen 2CV, to more recent Ferrari’s, like the Ferrari Testarossa or the Ferrari Berlinetta.

Currently, we have two main developers of boxer engines, Subaru and Porsche. Subaru built boxer engines since its early years. Their specialty is boxer engines mounted in the front with an all-wheel-drive layout, as seen on the famous Subaru Impreza and the current Subaru Legacy. Porsche, on the other hand, has a similar story, having used them since they ever started designing cars in the late 1940s. Nowadays, they do not employ them as often, being reserved for the Porsche Boxster/Cayman and the Porsche 911 that has used boxer-six engines since it was first designed (3).