Not every concept vehicle is destined for production and the Genesis X Speedium Coupe is one such model that won’t make it.

Genesis introduced the alluring, all-electric vehicle off-site during the 2022 New York International Auto Show, at the company’s design house in Manhattan’s Meatpacking District. The beefy coupe points to the brand’s electric aspirations just as the marque prepares to welcome a fully electric GV70 SUV by year-end.

Genesis chose the Speedium name based on the designers’ enthusiasm for motorsports felt at the Korean racetrack. Moreover, the title also captures Genesis’ conviction that the emotive value of driving will remain robust in the electrification era. Lastly, tagging “coupe” to the name further emphasizes the pleasure of driving through appealing designs.

“Less is more” when it comes to the Speedium’s design. This reductive tapestry represents subtle elegance, smooth lines, and clever curves. Thus, it goes against the typical design philosophy of modern vehicles with its seductive appearance.

“This car is an open-door moment in Genesis’ journey towards our future EV design,” said Luc Donckerwolke, Chief Creative Officer of Genesis. “This isn’t a show car — it’s a look into our design processes as we explore ideas for the next wave of EVs, one that incorporates Genesis’ DNA.”

Although the concept won’t make it to production, elements will appear in future electric vehicles. Indeed, we are not sure if the “smiling” front fascia will remain, but it does add a memorable impression to the design.

That front fascia takes the brand’s signature “two lines” lamps and reworks them into a full-width facet that embraces the form of the crest reminiscent of the Genesis Crest Grille. Specifically, it was devised to advance the brand mark of the wing face for the EV age by incorporating the daytime running lamps with the low beam and high beam lights simultaneously. Furthermore, the company indicates that it advances an EV visage that represents Genesis’ conversion towards developing into an all-electric vehicle brand with six models by 2030.

Overhead and the Profile

Looking down on the concept, the hourglass outline underscores the car’s emotion and personality. In particular, the luxurious and intense form highlights the wheel arches to form a powerful presence. When viewing the profile, an emblematic line stretching from the front to the rear of the car retains certain friction in the design just as a classic car would. Deliberately, the designers included an “anti-wedge” pattern that finishes in a simplified appearance that conveys restrained elegance. 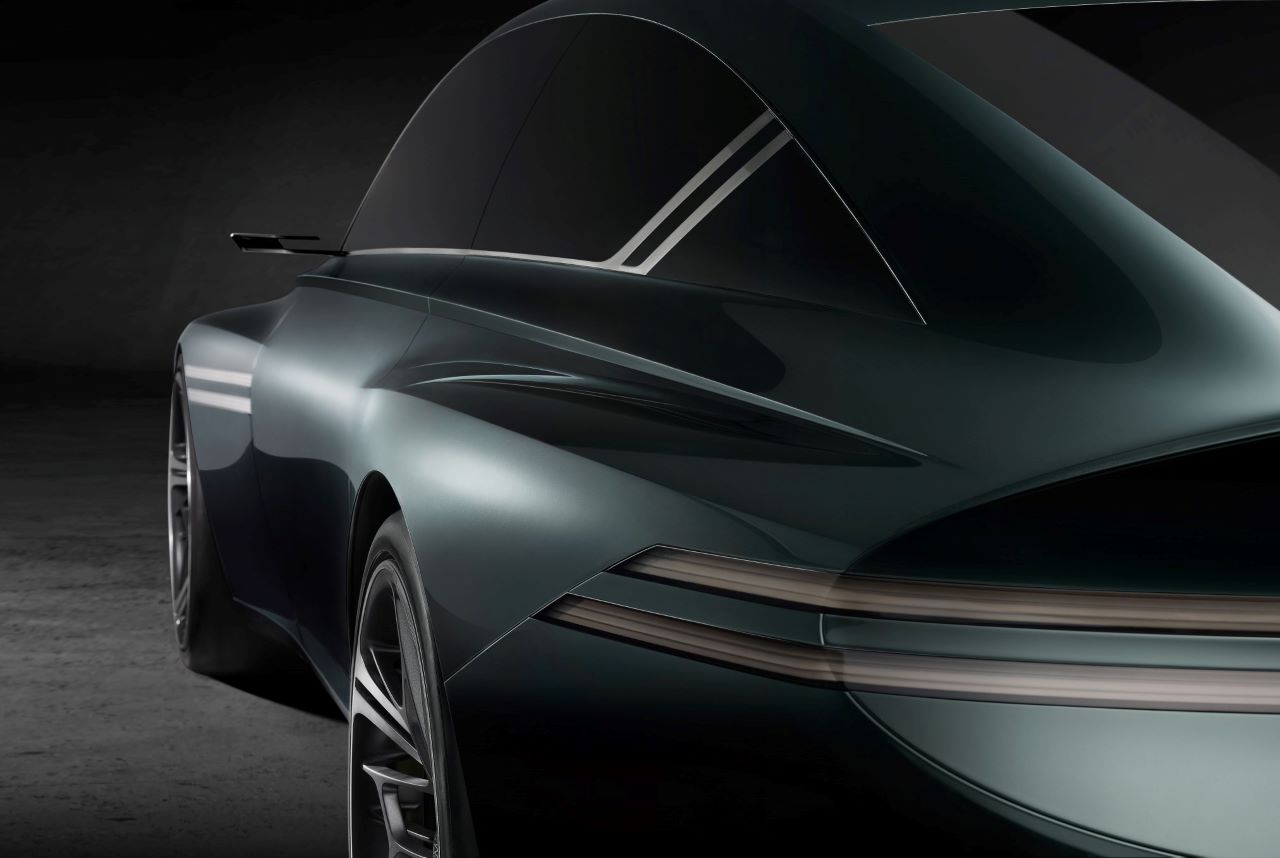 In the meantime, an oblique rear balances out the appearance of a visually pleasing tension between convex and concave surfaces. Notably, the V-shaped brake lights disrupt the rounded shape by delivering a remarkable disparity that is one of the characteristics of a Genesis vehicle.

“We are giving each design element space to breathe,” said Donckerwolke. “It’s not about making the design elements compete with each other, but about orchestrating the elements so that they complement and respect one another.”

“Inje Green” represents the concept’s metallic emerald green hue. Inspired by the Korean racetrack, the color incorporates the craggy scenery where the track is situated. Thus, it realizes the vision of a classic car that symbolizes dynamism, speed, and ageless elegance.

The Genesis brand continues to make great strides since its separation from Hyundai five years ago. Today, the six-vehicle lineup is comprised evenly of sedans and utility vehicles, covering the most significant portions of the luxury market.

Meanwhile, plans are underway to prepare the company’s Montgomery, Alabama, manufacturing plant to build the electrified GV70. Genesis says it is poised to set a “new standard” in the luxury EV market as it undertakes its transition.

0 353
Made Across America at the Washington Auto Show