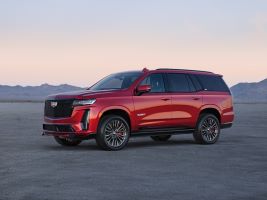 The pinnacle of Cadillac performance is the V Series, especially the Blackwing sequence. Both the CT4 and CT5 sedans offer V-Series and Blackwing variants, but soon they will be joined by the range-topping Escalade, at least in the V-Series department.

In a series of teases this week, Cadillac hinted at what is to come, including showcasing photos as included herein. The official debut of this 2023 model won’t happen until this spring, leaving enthusiasts wondering what’s up with Cadillac.

If you thought the CT4-V and CT5-V were the last of the gas-powered Cadillac performance models before the marque begins its shift to electrification, you are not alone. Cadillac seemed to indicate as much, but we were imagining about the sedans. After all, who would have thought GM’s luxury brand would find a high-performance variant of its Escalade SUV? Well, that is precisely what is planned, although the details of what is to come are scarce.

What we do know is that the hot-rod Escalade will include contrasting blacked-out treatments, the usual V-Series badging, and cutting-edge technology. On closer inspection, a revised bumper, a quad-tip exhaust, and some type of diffuser trim will also dress what certainly will be a six-figure Escalade.

The significant question is this one: which engine will reside under the hood? GM has some choices here, ranging from the twin-turbocharged V6 in the CT4-V to the supercharged V8 in the CT5-V. There is also a third engine that might motivate the Escalade and that is the new 5.5-liter V8 headed to the Corvette. However, we do not assume GM will bring in anything besides the supercharged 6.2-liter engine as the naturally aspirated version is currently in use. All GM’s engineers must do is rework the engine bay to accommodate the supercharger. With a different engine, it would be a costly and inefficient way to produce what is likely to be a limited edition and limited time model.

Will GM go the way of Stellantis and offer the Escalade V-Series for one model year? That is indeed the approach Dodge took with the Durango SRT Hellcat, which was offered for just the 2021 model year. For that model, Dodge allocated just 3,000 copies of the rarest of all Durangos. Notably, when Auto Trends received one to test drive in Spring 2021, the specialty model was already sold out.

Regardless of GM’s approach, the Escalade-V will gain all the attention it deserves. Consider this: if the 460 horsepower and 420 pound-feet of torque from the naturally aspirated engine is not enough, then again the potential 668 horsepower and 659 pound-feet of torque when supercharged will certainly quake. The latter is the engine’s power rating in the CT5-V Blackwing, therefore it is easy to conclude that a similar level of performance is coming to the Cadillac.

What we do not believe will join the hotted-up Escalade is the 6-speed manual transmission. Instead, the 10-speed automatic transmission seems like a given. We believe that the Escalade-V will come with standard four-wheel drive to help keep this machine planted, especially on tough courses. Although not readily apparent, GM may lower ground clearance to help with dynamics. When all is said and done, this SUV will still have body roll to contend with. Likewise, this model highly likely will be a straight-line shooter, not a track lap star. In any case, with magnetic ride control, we expect exceptional handling.

We have no other details to share now. GM will introduce the Escalade-V this Spring, perhaps at the New York International Auto Show in late March. Once that happens, we will share the rest of the story.