Fall is officially here and that means it’s time to grab your gear, jump in your four-wheel drive vehicle and hit the trails. Where the pavement ends, off-roading adventures begin. Fall provides the perfect weather and scenery to enjoy the trails. So, get out there before the snow flies. Wheelfire.com, the experts in off-road wheels and tires has put together this list of 7 trails to ride this Fall and 2 to start your bucket list.

What better way to take the Rubicon Trail then in a Jeep? Photo: Wheelfire.com.

No off-road trail list would be complete without the famous Rubicon. This trail is so iconic, Jeep named a Wrangler after it. Because the trail is maintained by the US Forest Service, it is not subject to seasonal access restrictions. It runs in a line roughly from Lake Tahoe to Sacramento. It passes through the El Dorado National Forest, the Tahoe National Forest and Lake Tahoe Basin managed land.

In an effort to “improve” the trail in 2012, Little Sluice was reengineered and Thousand Dollar Hill was closed, but there is still plenty of adventure left in the crown jewel of off-road trails. Whether you enter at Wentworth Springs or Loon Lake, the trail starts tame and then provides opportunities for rocky climbs, off camber turns and stream crossings.

The best times to visit are in October and early November. Daytime highs are in the 60s and 50s and the snow really doesn’t start falling until later in November. The El Dorado side of the trail has some designated camp areas and dispersed camping is allowed on forest land all along the trail.

October is just about the last month it is “safe” to attempt this trail. Rated difficult, but oh so worth it. Running about 120 miles from Elk City, Idaho to Darby, Montana be prepared to encounter horseback riders at the entrance, as this trail is popular with them as well. This rocky, steep and winding trail takes you through land that hasn’t changed much since the first settlers passed through. Encounter mountain meadows at about 6,400 feet and mountain goats at Burn Knob Lookout at 8,196 feet. The going is narrow, rocky, and steep in some places but the views are worth it.

Pack warm and cold weather gear, as the temperatures change with the altitude. There’s plenty of camping, toilet pits, and picnic tables along the route.

If having your toes and wheels in the sand is more your style, make sure you pack plenty of suntan lotion, take the top off and head down to Big Shell and Little Shell Beaches on South Padre Island. Hurricane Harvey unleased his fury further north and left this area of South Texas untouched. These beaches are four-wheel drive accessible only. Don’t even try it if you aren’t equipped. Enter from the north at Padre Island National Seashore and head south. Mileage is marked from Malaquite Beach’s southern boundary. Little Shell begins about 12 miles south of Malaquite and Big Shell begins at mile 18. The beaches are named for the shells that collect on the sand because of currents in the Gulf of Mexico.

Bring binoculars to watch the birds in the Laguna Madre on the other side of the island. Keep an eye on the tide and moon charts before scheduling this trip. During convergence of high tide and full moon, the beaches can narrow to not much more than a thin strip of soft sand dunes between the Gulf and the Laguna. 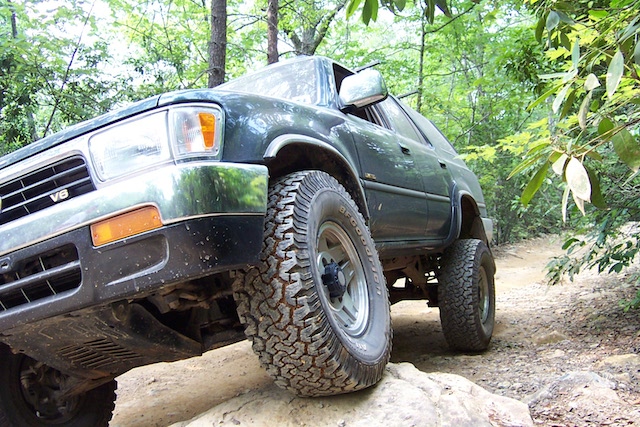 “Offroad, Uwharrie” by Mark Doliner is licensed under CC BY 2.0

We love this park for its overall accessibility. Its location outside Knoxville makes it no more than a day’s drive from most of the mid-Atlantic and southern states. Most of the trails are rated moderate, with a few difficult and easies thrown in as well. One of our favorites is Trail 22 for the mix of forest, rocks, mud and water crossings. You get it all, all in one trail.

Trail 22 is rated moderate and climbs no higher than 2,400 feet. If rock climbing is more your style, head over to Trail 15 for a Double Black Diamond rock crawling experience that includes large rocks, ledges, and ditches. Most trail riders run Trail 15 uphill for the ultimate challenge.

Windrock Park makes a great day trip or overnighter. The land is privately owned, so a Land Use permit is required, but at less than $40 for 2 days, that’s less than the cost of a tank of gas. Like Magruder Corridor, Windrock Park provides a variety of terrain, some places are great for mountain views, and the challenge of rock climbing. Windrock just dials it back a bit.

While everyone goes to Moab, you go your own way. The Dark Valley Trail and Dark Valley Shelf Trails are rated moderate. The Shelf Trails are off the beaten path, and that’s what you want in off-roading. You have a better than good chance to see elk, deer and antelope on these trails and be sure to use bear precautions if you camp overnight.

Both trails take you through the high forests of Boulder Mountain with views of valley lakes and the Jacob’s Valley Reservoir. Start your adventure at either the Aquarius ranger Station or at the Great Western ATV staging area. The trail is mainly maintained through activity. That’s why we recommend you have a winch or chainsaw to clear any fallen trees or debris on the trail. Hey, if you want it easy, then head west to Nevada. 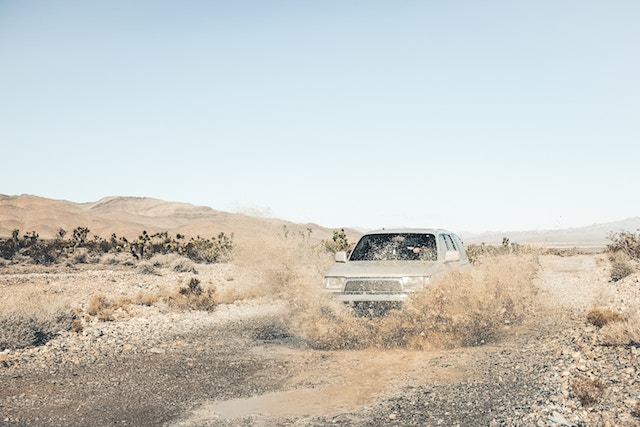 Off-roading in the vicinity of Mt. Charleston in Nevada. Photo: Wheelfire.com.

Mt. Charleston and the Spring Mountain National Recreation Area make the list not only for the multitude of trails, but their degree of difficulty, or lack thereof. Don’t let those easy trail ratings turn you off. You want to go to Lee Canyon, Kyle Canyon and the Mountain Springs area just for the fun of leaving the pavement and soaking in the high desert experience.

For example, Mud Spring Spur climbs through a Joshua Tree forest that slowly becomes an evergreen forest as you rise in altitude. If hill climbing in solitude is your thing, Trail 25797 in the Mountain Springs area has plenty of steep hills in the 15° range. For twisty, windy, snaky roads, Lambsquarters Loop lets you turn the steering wheel while digging the desert and mountain views.

They don’t close the trails for weather and because you reach altitudes of 6,000 to 7,000 feet you will want to make sure you take chains if you wait too late in the season to hit these trails.

7. The Cliffs Off Road Park, Wisconsin

The Cliffs is to the Midwest what Windrock is to the mid-Atlantic. This off-road adventure park is easily accessible from Indiana, Illinois, Wisconsin and Iowa. Located just outside Marseilles, you will find 300 acres of insane terrain. Get your wheels wet in the Kickapoo Creek, go mudding or rock-climbing.

This place is a favorite of all types of off roaders, so you’ve got to keep an eye out for ATVs but there’s plenty of room for everyone to roam here. And if the natural terrain isn’t enough, they’ve added manmade features like a tire crawling park too.

You aren’t going to make these trips this fall, but if they aren’t on your bucket list they should be. They are the ultimate off-road adventures in the United States.

Sam Correro spent 12 years cobbling together a network of off-road trails that stayed close enough to civilization to get gas and grub but far enough away to see America. The result is the “Trans American Trail” or TAT. The quotes are because the original trail started in far west North Carolina and wound its way to the Oregon coast, not exactly a true transcontinental trail. But off roaders treated it like open source software to be built upon.

The trail now begins in New York and ends at the original terminus in Oregon or provides an alternative ending spot in California. Charted for motorcycles, it’s now used by Jeeps, trucks, and everyone that loves leaving the asphalt. Not a single track, you’ll follow dirt roads, gravel roads, Forest Service roads, and farm roads to discover the real America and meet real Americans along the way. It’s not about rock crawling; it’s about adventure. Much like many hikers tackle the Appalachian Trail trek in segments over several years, off roaders are hitting the TAT in sections. But to do it right, you’ve got to do it in one run. 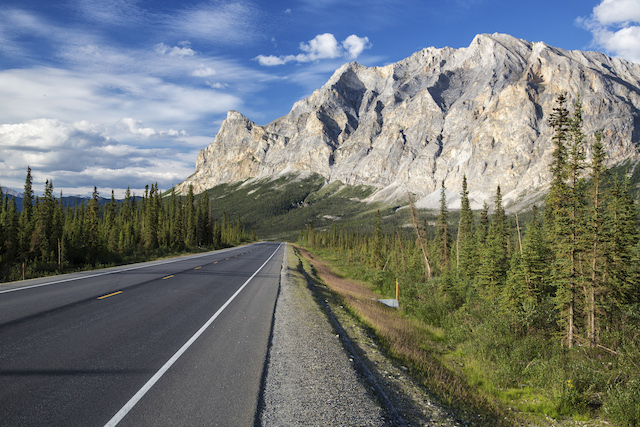 “My Public Lands Roadtrip: Dalton Highway in Alaska” by Bureau of Land Management is licensed under CC BY 2.0

Alaska Route 11 or the James Dalton Highway should make every bucket list just for where it goes. Traversing 414 miles through central and northern Alaska, it ends near Prudhoe Bay and the Arctic Ocean. The Dalton was made famous by the TV show, Ice Road Truckers and you need to be prepared to share the road with semis.

Since the road is gravel and you won’t be traveling with a spare windshield, just get used to pulling over and letting the big guys pass. You will need to travel with plenty of gas and a few spare tires. If you get in trouble, you’ll be on your own. Tows start at $5 a mile and there are plenty of miles to cover.

Once you get north of Coldfoot, there’s 240 miles of nothing but pure Alaska wilderness until you get to Deadhorse. Take your CB radio and plenty of cash, there’s no debit, credit or cell phone service to be found. But it is the ultimate ride to the top of the world. Literally.

Chuck Krause
Chuck Krause is the managing editor for Wheelfire Blog. Since the early 2000’s, he has managed and owned a number of internet retail stores in the automotive parts industry. He is an especially enthusiastic owner of his off-road “monsterized” Jeep Wrangler. A fixture in every summer’s Jeep jamboree, (where his reputation for extreme mudding and trail riding are legendary) Chuck is well known for his infectious passion and knowledge about all things automotive.