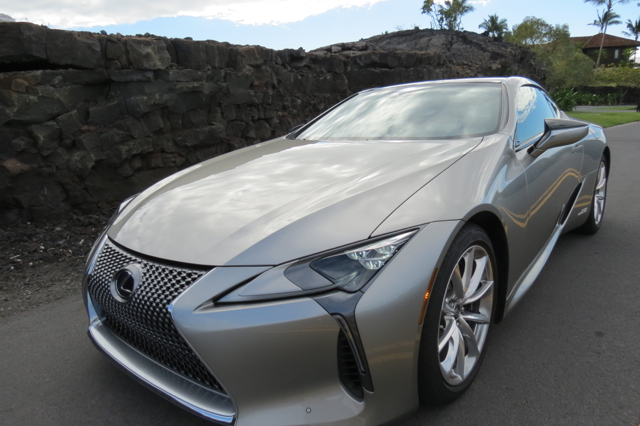 Apart from the LFA exotic car, Lexus has had few performance models to show for it. In more recent years, however, various “F” versions of the IS, RC, and GS have emerged, underscoring this luxury brand’s performance credentials.

As good as the RC F coupe has been, it isn’t a match for the best models out there. Sure, the RC F’s 0-60 mph time is about 4.4 seconds, but it isn’t speed alone that defines the top end of the market. Here, you need excellent driving characteristics along with top-end luxury features to compete among the best — what Lexus recognizes as international grand touring coupes.

The next series of performance cars from Lexus sport the LC badge. The LC 500 is the standard model; the LC 500h is the hybrid. Although the engines and hybrid powertrain seem familiar, what’s new is the vehicle’s platform.

That platform is officially known as the global architecture for luxury vehicles (GA-L). Lexus says that it will serve as the blueprint for other models, including the full-size and next-generation 2018 Lexus LS sedan.

Although coy about what Lexus’ models would follow, company PR folk hinted that others are already in the works. Figure that the midsize GS sedan is up next, followed by the IS line and perhaps the RC.

The RC is somewhat of a question mark here as its place in the Lexus hierarchy doesn’t seem certain. Then again, Lexus stressed that the near $30,000 price difference between the RC F and the LC 500 demonstrates that there is much room for the lower cost model. Thus, this guy believes the RC will be around for the long haul.

Larger, But With Lightweight Materials

Critics should carefully study what Lexus is serving up in its GA-L platform. Numerous lightweight materials are in place, including high-strength steels, lightweight forged aluminum control arms, and even a lighter transmission. Although at 4,240 pounds it weighs nearly 300 pounds more than the RC F (weighing in at 3,958 pounds to be exact), the LC 500 is 5.5 inches longer between the wheels, 2.2 inches longer from bumper to bumper and 3 inches wider.

Where rear legroom is terrible in the RC F, it is somewhat better in the LC 500. Yes, you could place a pair of people in the back seat if you had too. Personally, I would have preferred a 2-seat design instead of the 2+2 layout. Once again, Lexus did not consult me before locking down the final design….

You get two powertrain choices with the LC Series starting with the familiar 5.0-liter naturally aspirated V8 engine making 471 horsepower and 398 pound-feet of torque. Married to an all-new 10-speed automatic transmission, the combination ensures a 0-60 mph time of 4.4 seconds, matching the lighter and smaller RC F.

The transmission is lighter than the outgoing eight-speed automatic and Lexus says that the lower five gears shift fast to move the sleek coupe with ease. Slip the transmission into sport mode and you’ll have steering wheel-mounted paddle shifters at the ready. No manual gearbox is offered, but there is a certain level of driving connection realized when working the paddles.

The other powertrain choice is none other than a hybrid. Yes, that’s right: this performance model offers a hybrid variant, but don’t be dismayed: where the gas model has a 0-60 mph time of 4.4 seconds, the hybrid comes in at 4.7 seconds.

The 2018 Lexus LC 500h is powered by a 3.5-liter V6 engine with a pair of electric motors at the ready. The first engine acts as the primary generator and also functions as the engine starter and engine speed controller.

The second electric motor drives the rear wheels and supplies regenerative braking. An 84-cell lithium-ion battery pack stores electricity and sends energy to the wheels or to the engine, as needed.

Interestingly, the LC 500h has what is known as a multi stage hybrid transmission — in addition to the planetary gear set up familiar elsewhere, the new transmission adds a unique four-speed transmission. When working in tandem, the two gear sets alter output in four stages across the V6’s power range. Further, the system allows for more electric assist at lower speeds and can move this luxury coupe at speeds up to 87 mph with the gasoline engine turned off.

Do you think Lexus should have thrown its resources into diesel technology as have other luxury manufacturers? The power and efficiency edge of the hybrid system should have you considering otherwise.

I’ve heard all kinds of opinions about the current Lexus styling convention, so nothing surprises me. Typically, the spindle grille is the prime topic, followed closely by the pronounced body sculpting, especially in the front fascia.

Lexus’ spindle (hourglass) grille is pronounced in the LC Series, but there is one difference this year: a greater concentration of honeycomb is evident in the upper portion of the grille. Take a look at this machine from the front and you might imagine a distinct waterfall look when viewing the grille from top to bottom.

The luxury sport coupe has a pronounced athletic stance from bumper to bumper with the deeply raked windshield, high beltline, and a sloping roof line. Large ducts direct air into the rear tires, moving across the tire sidewall to enhance straight-line cohesion and steering responsiveness.

From the rear, the raised deck is highlighted by a decklid spoiler, double boomerang tail lights, and stacked exhaust inlets.

A Sporty, But Elegant Interior

The position and height of the driver’s seat, the location of the steering wheel, and the layout of the controls provide a driver-centric cabin with excellent forward sight lines. Lexus not only supplies ample hip bolstering up front, but the shoulders are bolstered too, effectively cosseting the driver and front seat passenger. Where some sport seat styles can prove wearisome, I found these seats were very comfortable as they took the pressure off the lower back while offering balanced support everywhere else.

One matter about the LC 500 had me baffled as our team of media experts left the grounds for roads far, far away. And that was the location of the drive mode select position. Instead of being located between the seats at the base of the stack, Lexus placed it on the outside of the instrument panel. As soon as I found it, I made the adjustment from normal to Sport S+ to enhance the transmission shift points and to allow the baffles to open under acceleration.

The LC 500 features Lexus’ most recent audio, navigation, and connectivity technologies. A new multimedia package is present, offering an improved graphic user interface with upgradeable software. This means as Lexus rolls out subsequent updates, you won’t be left behind. As before, a Remote Touch Interface touchpad is present. Rounding out the major tech features is an exquisite sounding 12-speaker Pioneer audio system. 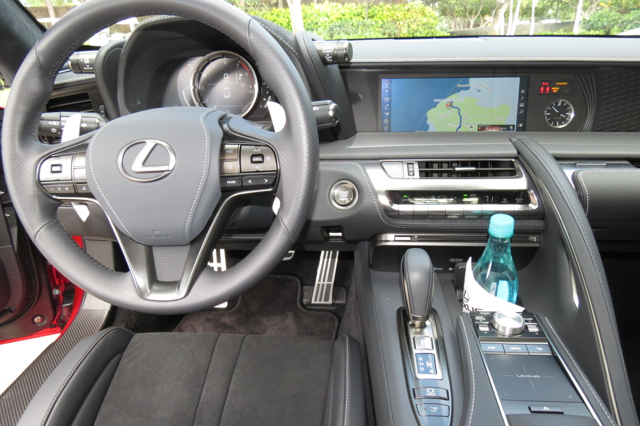 Unless you’re driving locally there is no reason not to have Sport S+ mode selected when driving the LC 500. The engine responds quicker, shift points are closer, and the exhaust system sings its praises.

Be prepared to move away from a dead stop with authority. I, for one, am glad that Lexus did without any type of boosting — turbocharger or supercharger — when developing this model. The naturally aspirated V8 throws down ample power and continues to do so as you build speed. You can sense the transmission responding in kind as the rear wheels turn.

Would all-wheel drive have been beneficial here? Possibly. Then again it would also add weight. Our carefully curated Hawaiian roads were ideal for testing this coupe’s capabilities as we drove from sea level to well over 3,000 feet. The coupe hangs with the twisties, but our only regret is that the state’s roads have speed limits ranging mostly from 45 to 55 mph. We also learned that the local police drive their own vehicles, plunking a big blue light on the roof to pull over speeders. Not wanting to fund the island’s economy in a big way, we chose to ease up on the pedal. And yet, whenever we could punch it, we certainly did.

Taut steering and the coupe’s low center of gravity mean this model is most definitely a driver’s car. All models come with 20- or 21-inch wheels set within Michelin Pilot Super Sport or Bridgestone Potenza S001 run-flat tires. A highly rigid suspension combined with reduced vertical stiffness results in a handling gem and a comfortable ride.

As for the hybrid, the big surprise was the amount of power coaxed out of the V6 engine and the electric motors. By itself, the V6 wouldn’t deliver the expected power for this sports coupe, but with its hybrid enhancement, full power isn’t too far off from what the V8 delivers. 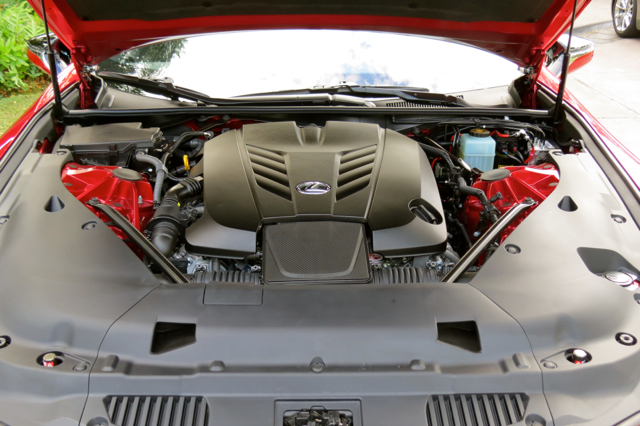 The LC Series will officially inaugurate the GA-L platform. That’s the good news. The bad news is that production only begins in March and the first models won’t arrive in the states until June at the earliest.

Furthermore, Lexus is allocating just 400 models per month in the US, with the ability to expand production to perhaps 500 units. Lexus says that half of the LC’s build capacity is set for the US market, with the rest of the world claiming the other half. 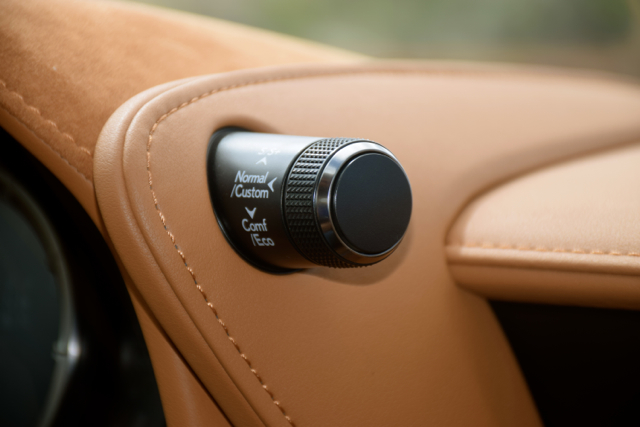 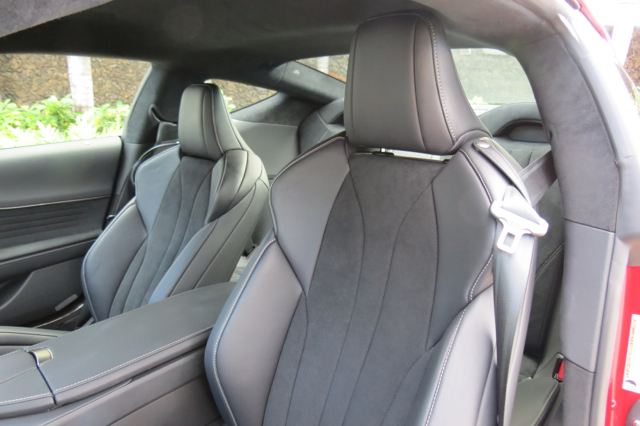 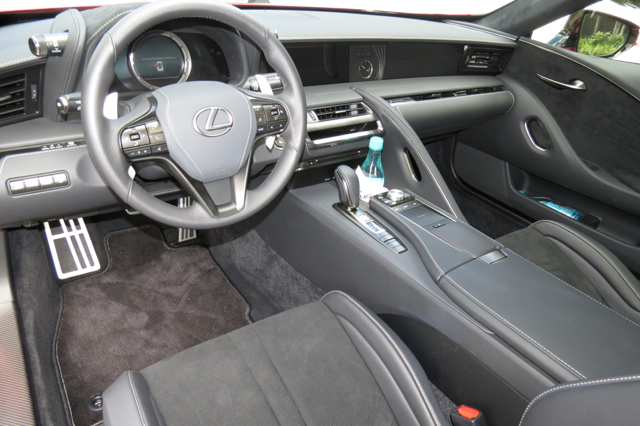 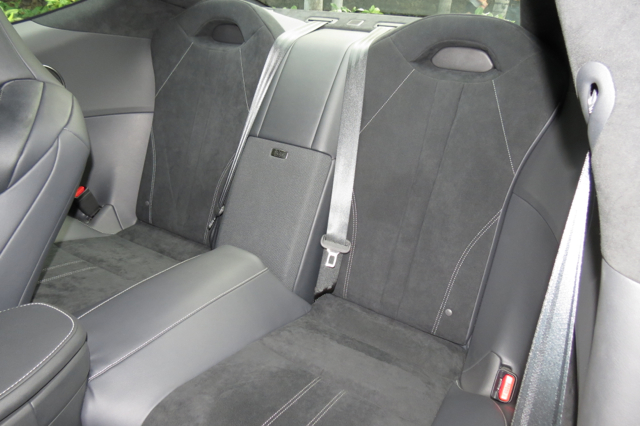 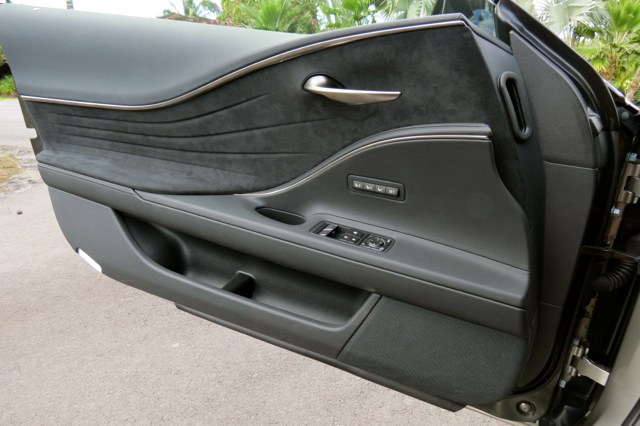 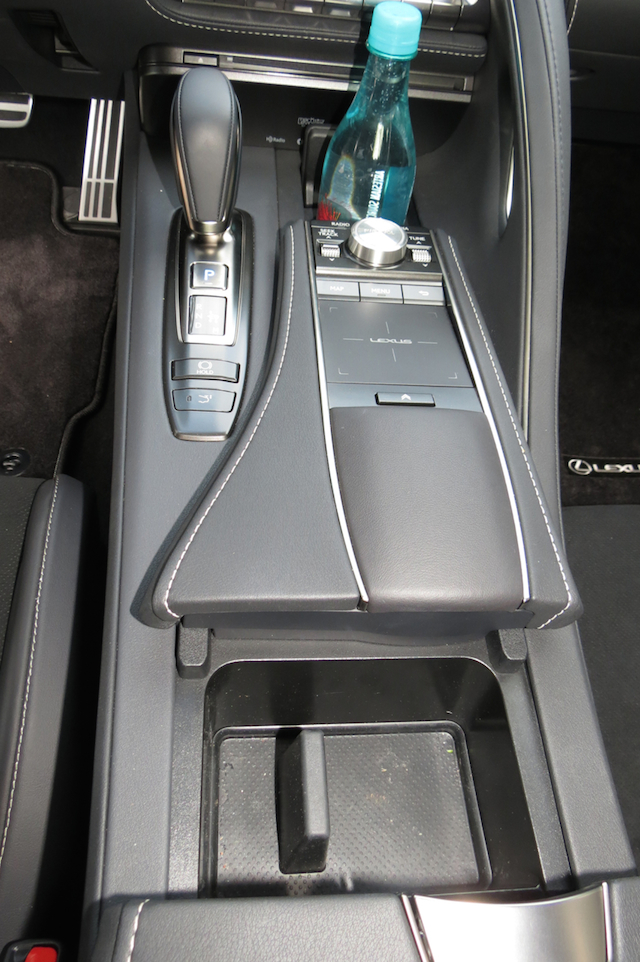 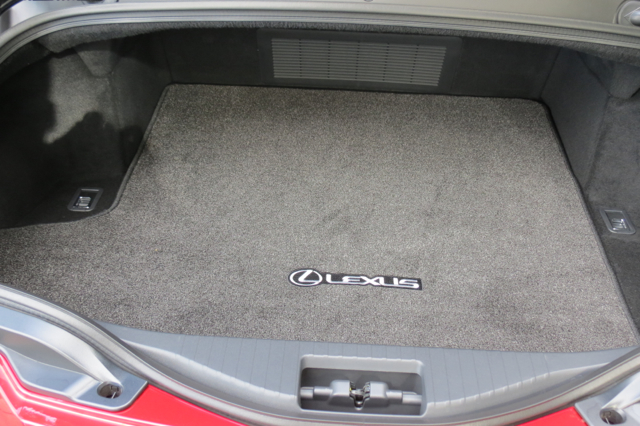