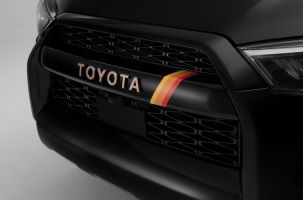 If you’re an off-road enthusiast, then you’re familiar with the Toyota 4 Runner. This midsize, traditional body-on-frame SUV is an uncommon model in a segment dominated by crossovers. Yet, like the Jeep Wrangler and the revived Ford Bronco, its fandom remains strong some 40 years after it was introduced.

Toyota will mark the 4Runner’s 40th anniversary in 2023 with a special trim limited to 4,040 models. This four-wheel-drive-only model will offer just three colors with unique striping and anniversary badging. With the entire automobile industry preparing to pivot to electrification, where does that leave the 4Runner? We can’t say what Toyota’s long-term plans are for this vehicle, but we feel confident that a new version is right around the corner.

Read and we’ll examine the 4Runner’s history, the current model, and what should come next.

Toyota was one of the earlier Japanese brands to offer small pickup trucks in the U.S. As a result, the company earned a well-deserved reputation for its offerings.

The market, though, was favorable to four-wheel-drive vehicles, a segment firmly controlled by the domestics – Ford, Chevrolet, Jeep, GMC, and Dodge. Even International Harvester was involved for 20 years, as its Scout model battled for a slice of the market.

By the early 1980s, Toyota began working with Winnebago to produce a Trekker model based on the Hilux truck line. That experiment lasted a few years, then ended in 1984 when the 4Runner arrived. Then as now, this fully enclosed SUV has shared its platform with other Toyota models, including the Hilux, Land Cruiser Prado, FJ Cruiser, and Tacoma.

The current 4Runner is a five-passenger, two-row SUV with four doors and a liftgate. Yes, a third row is available, but the ideal arrangement is two seats with ample storage space behind.

Fifteen years is a long time to stick with the same generation model and that is exactly what Toyota is doing with the 2023 4Runner. It has, however, undergone several styling changes during that time, including a more expressive grille and modern lighting elements. Overall, though, its form remains the same. Also, the previously available four-cylinder is gone, leaving just the V6.

We admit, that Toyota is slow in updating its trucks and SUVs. Much of the company’s attention is on crossovers. The automaker is still a leading seller of sedans such as the Camry and Corolla.

For 2022, an all-new Toyota Tundra arrived, a full-size pickup truck. Like the Tacoma, the Tundra was showing its age and was well behind the pack. However, the aged Tacoma still leads the midsize pickup truck segment, outselling its next three competitors combined. Still, with a new Tundra in play, we expect an all-new Tacoma for the 2024 model year.

As the Tacoma goes, the 4Runner will follow. We won’t speculate much about either one, but what is good for the Tacoma will serve the 4Runner well. A hybrid powertrain along the lines of the Tundra seems possible with power the emphasis. This means a standard four-cylinder engine would serve the market, but don’t be too surprised if both models are hybrid only.

Between the Tacoma and the 4Runner, Toyota offers four-wheel-drive thrills in the midsize segment. We won’t worry about what full electrification will do as the new models would most likely be among the last to make the switch. This is great news for anyone who enjoys the grunt of an engine, the shifting of gears, and the feel of low gearing while conquering some of the toughest trails anywhere.