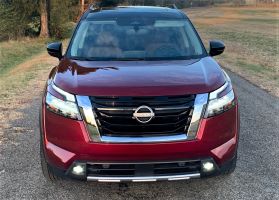 The Pathfinder is your three-row family utility vehicle.

Family cars were once represented by large sedans and station wagons, with minivans flourishing in the 1980s and 1990s. However, in more recent years, the prevailing trend is crossover utility vehicles, which offer the best fusion of passenger room, cargo space, and efficiency.

The midsize Nissan Pathfinder represents all three categories quite well and adds technology and safety features that make it too challenging to disregard. 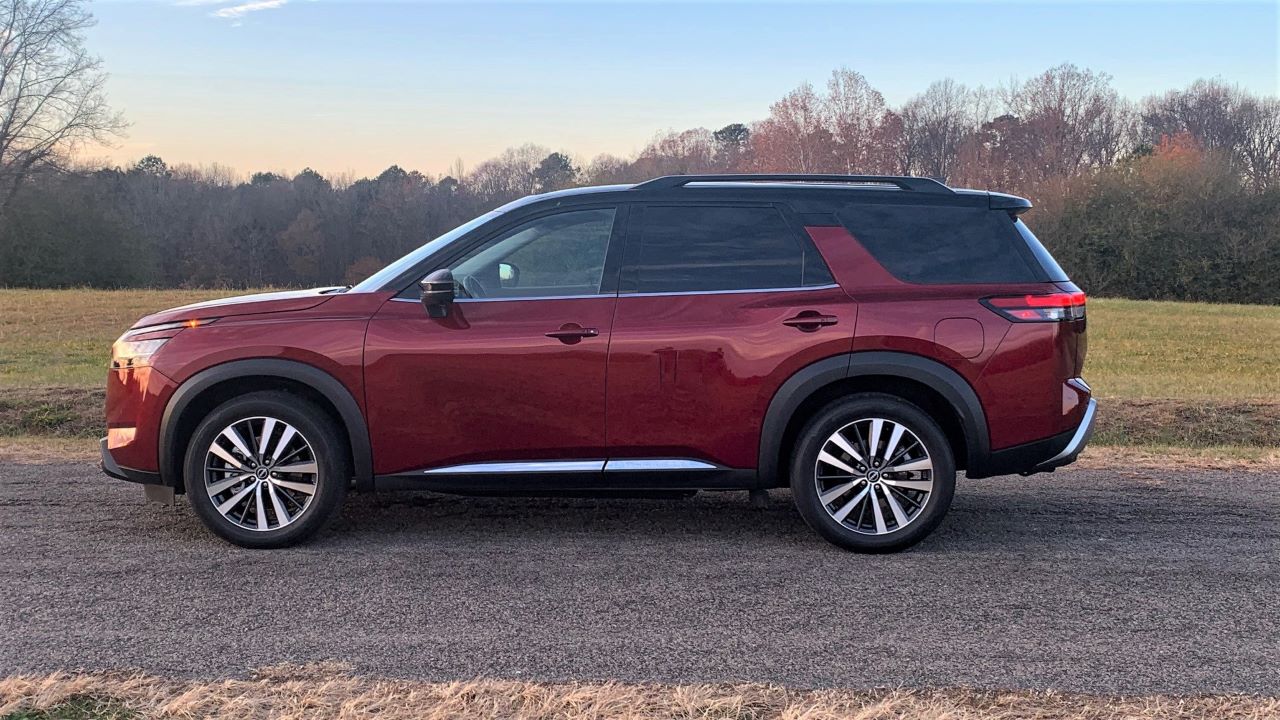 Highlights of the 2022 Nissan Pathfinder

The Nissan family of utility vehicles features a modern styling expression. Beginning with the latest Rogue model, a compact crossover, the form is more rugged than previously. Nissan sought to apply that principle to the latest Pathfinder, thus the look is a clear departure from the last generation. In any case, with much more of an SUV persona, the 2022 Pathfinder offers some separation from the pack.

Indeed, this time around Nissan dispensed with the curved countenance. The latest version is muscular, with an audacious grille peppering a robust front facade. Focus on the grille and a previous Nissan trait suddenly becomes apparent. Specifically, three slots occupy the top of the grille, a design characteristic from times past. Specifically, the pattern sits directly above the marque’s familiar V-motion grille for an exclusive appearance.

Along the sides, the Pathfinder offers its distinguishing marks. For instance, the black-clad wheel arches are athletic and converge with the elegance of numerous wheel options. Also apparent is the floating roof design that’s much more commonplace in sedans, but Nissan pulls it off well here.

At the rear, the light pattern with its narrow splines ties in with the front LEDs. The PATHFINDER lettering hearkens to earlier models, offering a sharp and distinct presence that serves as an exclamation point for this conveyance.

Nissan equips the 2022 Pathfinder with LED headlights and 18-inch alloy wheels. Move up to the SV trim and this one adds a panoramic moonroof and a power liftgate. Furthermore, a motion-activated liftgate is available.

Ascending the trim range brings in full LED lighting, power-folding side mirrors, heated and power-controlled side mirrors, and roof rails. Also available are 20-inch alloy wheels and a tow hitch receiver with a 7-pin wiring harness. 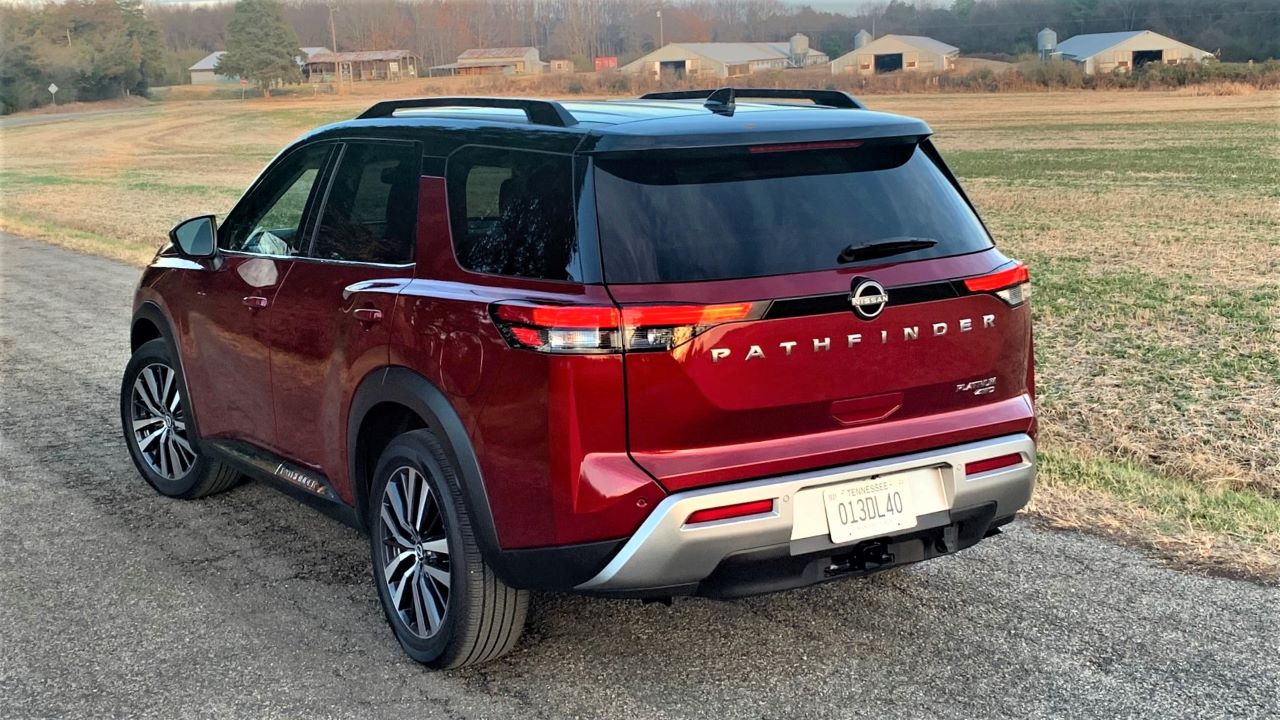 There was no 2021 model as the 2022 Pathfinder launches the fifth generation. Conspicuously, this one shares the same 114.2-inch wheelbase of the previous model, but we found the interior slightly roomier than in the past.

The 2022 Pathfinder comes with standard eight-passenger seating. However, we think choosing the seven-passenger configuration is ideal. Under this arrangement, you’d substitute the second-row bench seat with two captain’s chairs. Notably, a removable console separates those seats. It is entirely useable when needed, but it is also helpful when you want to remove it.

The middle-row captain’s chairs are easy to move out of the way. One flick of the singular button on the side of each chair pushes and flips the seat forward for optimum third-row access and egress. It’s a strong improvement over what some competitors offer, as often it’s a two-step process that requires bending to the bottom of the seat and pulling one lever, while releasing a second lever on top, then shoving the seat forward.

Overall, the quality of materials used this year shows improvement. You’ll still find hard plastics, such as at the base of the dashboard, but there are also soft-touch materials found throughout. Cloth seats are standard; leather seating is available.

Seat comfort is one of Pathfinder’s strong suits, particularly across the first two rows. Two may sit in the third row with ease or a third passenger for short treks.

The 2022 Pathfinder discharges 16.6 cubic feet of standard storage space. Drop down the second and third rows and an expansive 80.5 cubic feet of storage space is at the ready. Moreover, as with some other Nissan models, the Pathfinder has a storage area underneath the rear floor. It is the consummate place to disguise gear or stash wet swimwear. 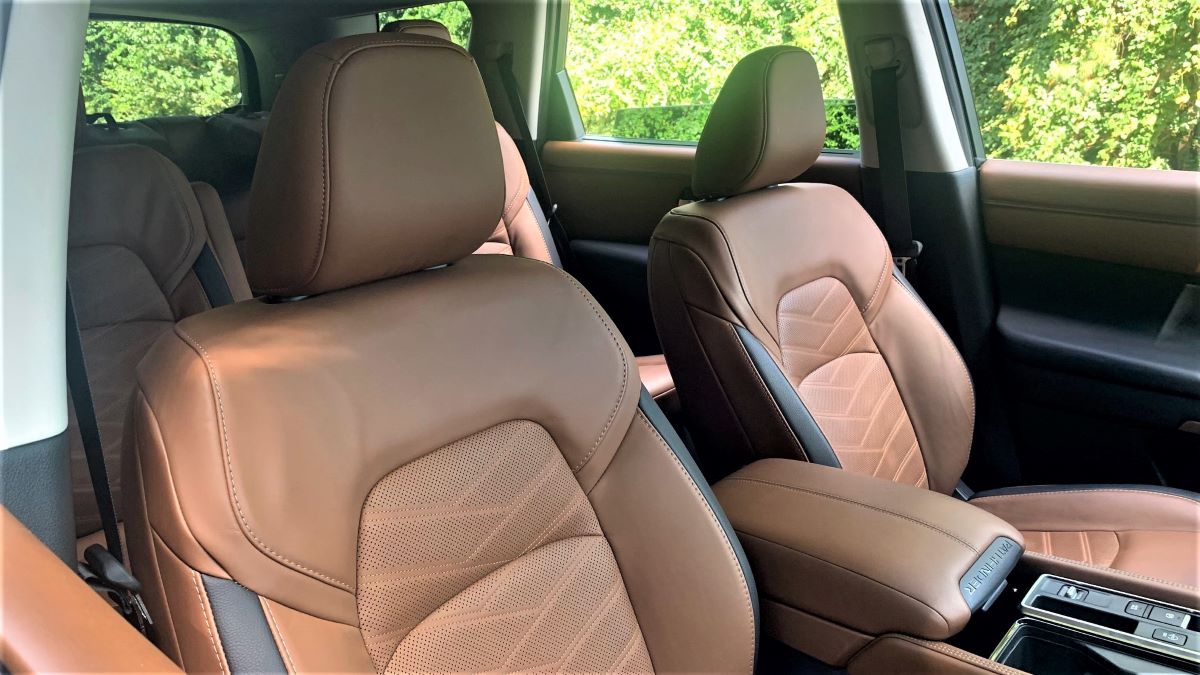 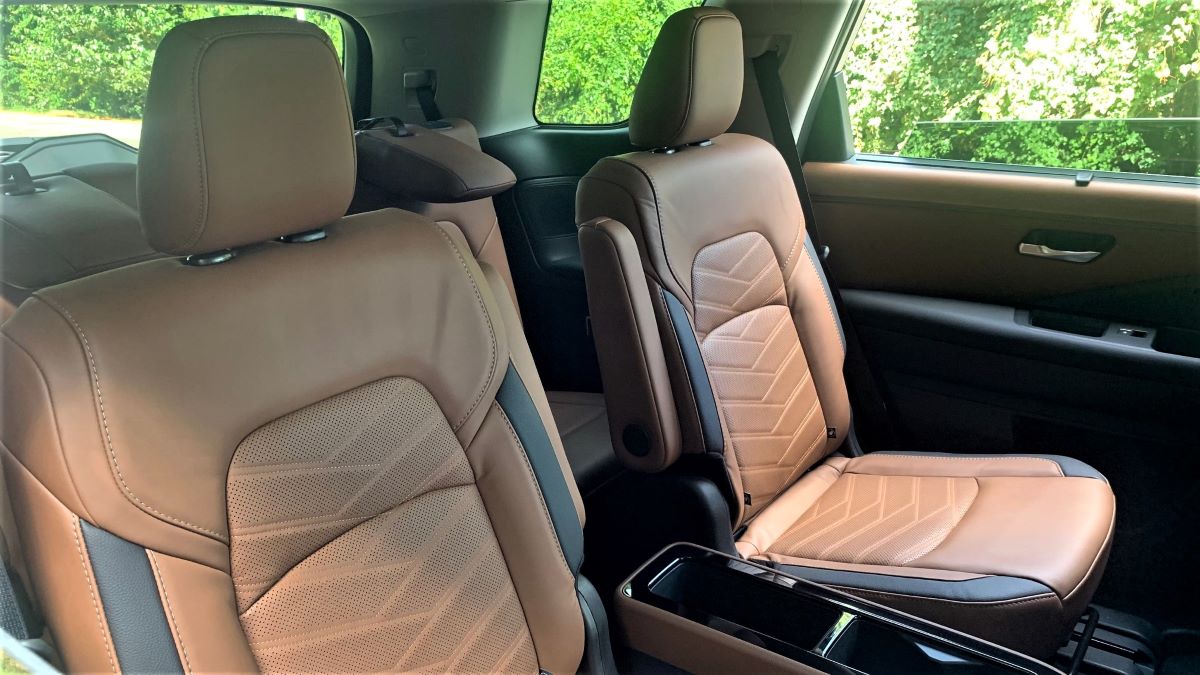 Nissan supplies the 2022 Pathfinder with an expected level of driver-assist equipment. What isn’t standard is typically available through package or trim upgrades.

We’ve seen Nissan’s ProPilot Assist package exhibited on most Nissan models over these past few years. This system supplies aspects of autonomous driving. Specifically, when set in motion, ProPilot Assist distributes steering inputs to center the Pathfinder. Likewise, it functions with adaptive cruise control to supply separation between your vehicle and the one in front.

Nissan supplies an 8-inch touchscreen display on some models and a 9-inch display on the upper trims. The base S trim comes with a six-speaker audio system and satellite radio. In addition, all trims have Bluetooth, four or more USB connections, and Apple CarPlay and Android Auto smartphone integration.

The 9-inch screen starts with the SL trim and includes a fifth USB port. Also included are a 13-speaker audio system and wireless phone charging. Choose the range-topping Premium trim and this model has six USB ports.

The Platinum trim also includes a 12.3-inch digital gauge cluster. They’re nearly ubiquitous and this one is sporty and captivating. Moreover, digital screens are more legible and far less likely to cause eye strain. That’s a winner in everyone’s book!

The competition is fierce in the midsize, three-row crossover segment. Every manufacturer has at least one model. A few have at least two. Therefore, with numerous choices, consumers have much to contemplate.

Among the top emulators are the Toyota Highlander, Chevrolet Traverse, Ford Explorer, Honda Pilot, and the Dodge Durango. Other models comprise the Buick Enclave, Hyundai Palisade, Kia Sorento, Kia Telluride, and the Volkswagen Atlas. We would be remiss if we left out the Subaru Ascent, Mazda CX-9, and the GMC Acadia.

Under the hood of every 2022 Pathfinder is a 3.5-liter V6 engine with 284 horsepower and 259 pound-feet of torque. The engine is a Nissan mainstay and carries over from the previous generation. Power routes to the wheels utilizing a 9-speed automatic transmission that replaces the previous continuously variable transmission.

Towing is one of Pathfinder’s strengths. Indeed, this model offers a standard 3,500-pound tow rating, but with the available tow package, the Pathfinder pulls up to 6,000 pounds. That’s quite an accomplishment as only the rear-wheel-drive-based Jeep Grand Cherokee L and Dodge Durango accomplish that.

For most people outside of snowy climates, a two-wheel-drive Pathfinder is sufficient. But for everyone else, the available all-wheel-drive system is worth considering. Nissan calls the system “four-wheel-drive” but it lacks a locking rear differential. On the other hand, it does have a limited-slip differential that swings power to the rear wheel with the most grip. Furthermore, by adjusting through the seven drive modes, the right grip for the conditions at hand may be realized. Thus, the Pathfinder can tackle light-duty trails with ease while handling mud, snow, and sand as conditions warrant.

In all, the 2022 Pathfinder shows improvements in steering and supplies reasonable handling and solid braking. Some body roll is present on twisty roads and while cornering, but that’s typical of any high-profile vehicle. 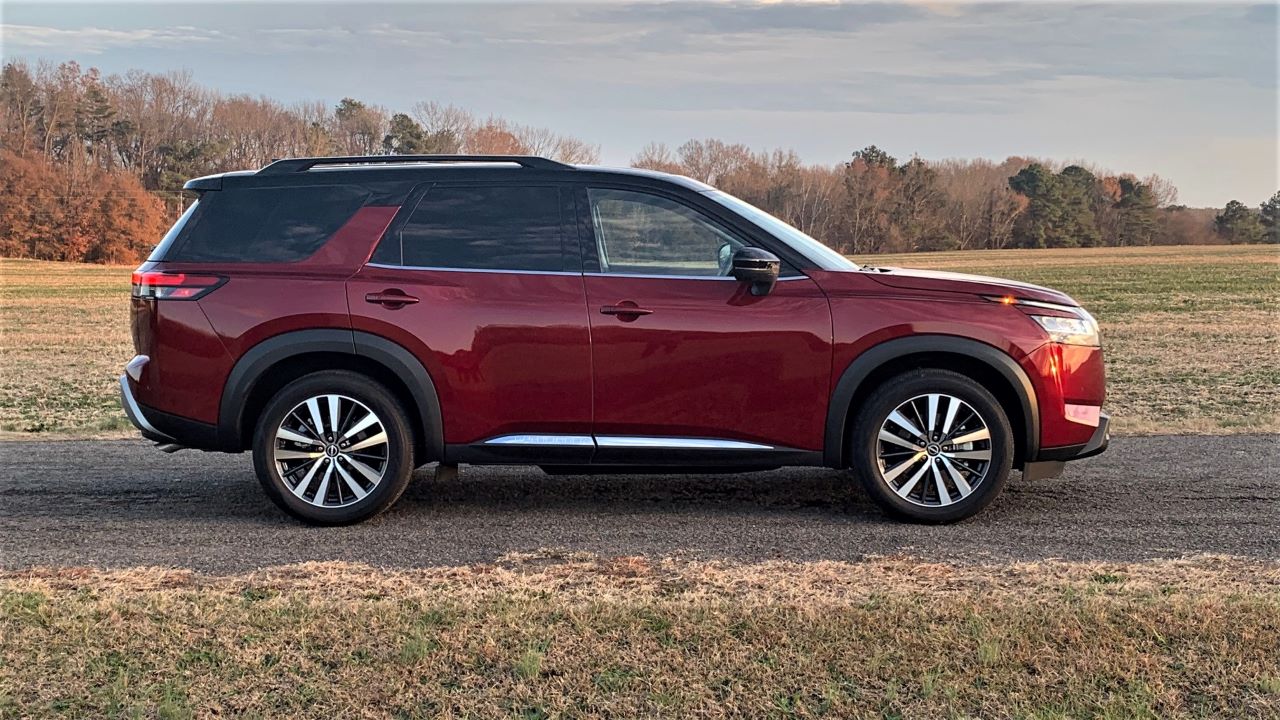 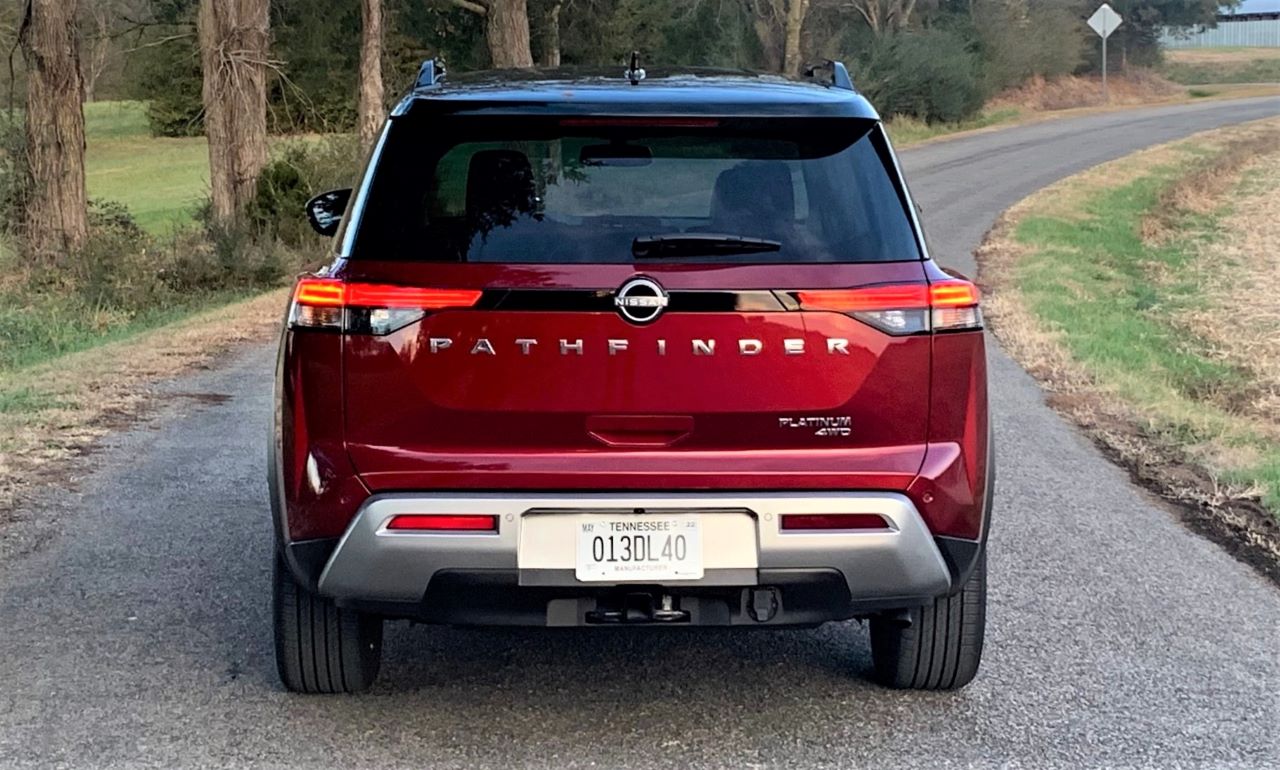 Nissan needed a new Pathfinder to strengthen its position in an ultra-competitive segment and succeeded. That the company desired a more rugged persona should help distinguish it while appealing to Nissan faithful.

A well-equipped model can be had for about $40,000 and that price point remains the sweet spot for the segment. All in all, Pathfinder fulfills its mission and delivers a few gratifying surprises along the way.