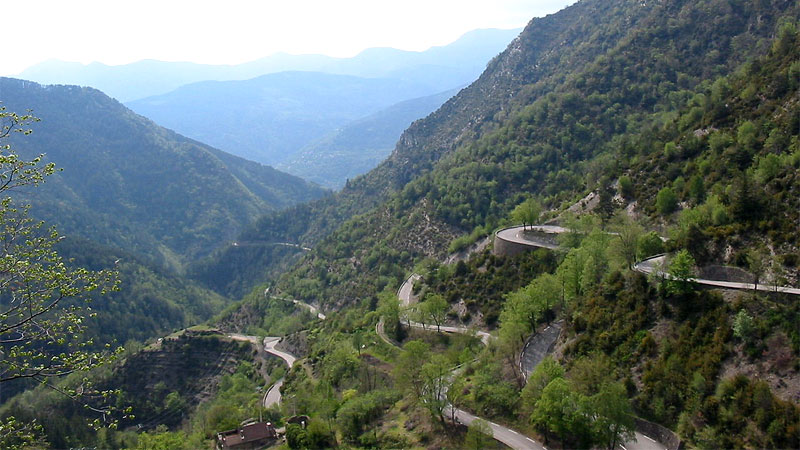 One of the most important stages in the World Rally Championship, the Col de Turini is part of the world-renowned Rallye Monte-Carlo (Monte Carlo Rally) and is paramount to European automotive culture.

The 19.26-mile-long track links Lantosque in the commune La Bollène-Vésubie, with Sospel in the commune Moulinet. The 5,272-foot (1,607 m) elevation road first appeared on the Monte Carlo Rally in 1962, attracting many drivers, motorcyclists, and bikers since.

Its placement is unique, bordering France, Monaco, and Italy, in a topological region that’s unique to the continent. Unlike numerous other roads, there isn’t sufficient information regarding its building process, the government’s careful decision-making, and the tragedy that foretold it. However, it possesses more car history than most passes out there.

Ever since immortalizing modern history, people considered that the Col de Turini is a true driver’s road that’s worthy for racing. Moreover, the same people decided that the only suitable time for racing is in the dead of winter when the asphalt is covered in heaps of snow and coated with glass-like ice.

Consequently, there are photos of people racing there as early as the late 1950s, stepping on the gas for the small length of road that they have the chance to do so (1).

However, this wasn’t when the road started to gain its current glory. That happened in 1965. Back then, the Monaco F1 circuit had just shut down, therefore making extra room for the Monte Carlo Rally. When presented with such an opportunity, the organizers decided to increase de Col de Turini’s difficulty by making drivers race in the dead of night.

One whole night was dedicated to rallying on the Turini, with six full stages split across the 19 miles. Consequently, this is where the famous “Night of the Turini” comes from, and the popular nickname of the “Night of the Long Knives”, thanks to the car’s high beams cutting through the darkness.

Its popularity and difficulty stem from a myriad of factors, from its expected layout to the more subtle tire choice. Multiple portions of the Turini are shaded from the sun for a substantial part of the day, in turn, keeping those portions coated in ice.

Other sections see the light for a good portion of the day, making them forever damp. Don’t forget that snow is also present, along with tiny portions of regular dry asphalt. Consequently, teams must reach a compromise, one that’s not easy to do, and drivers must adapt to it, which is even tougher.

Besides, spectators weren’t the kindest of the bunch. Back then they threw snow on the course in a mindless attempt to make the race more interesting, with instances where drivers crashed severely.

Numerous popular names made history on the Turini, such as Carlos Sainz Sr., the father of Carlos Seinz Jr., the F1 driver who competes for Ferrari, the renowned Sebastian Loeb, the prolific Didier Auriol, or Walter Rohrl in his trusty Audi A2 Quattro, to name a few. However, the achievements of some drivers are arguably bigger than others.

The FIA realized in 1997 that driving the Col de Turini in the middle of the night is incredibly dangerous, so they decided that in 2002 that stage would run during the day. Accordingly, this was the time where the nickname “Night of Turini” came to a brisk halt, as many considered that it had lost a great deal of its charm. (2)

An Engineering Marvel With Spectacular Scenery

Notwithstanding the rally, the Col de Turini remains one of the most strenuous drives in the world, and possibly one of the prettiest. The pass is a wonder of engineering, developed as a balcony road, cut inside the face of the mountain, and exhibiting one of the greatest views throughout Europe.

The road closely follows the mountain’s edge and showcases an immense variety of technical corners, tight hairpins, and sections with little to no visibility.

Several sections offer protection with short brick walls, thus securing vehicles from plummeting to their demise in case a driver shows a bit too much courage. Numerous portions of the road that aren’t guarded by such a wall were ultimately protected by steel railings, to avoid dangerous sections as much as possible.

The drive itself is nothing short of stunning, yet immensely difficult and technical. The scenery changes massively on the drive. You’ll encounter gorgeous vistas across the valley for most of the drive, interspersed by thick forests and steep mountain faces so you don’t get intoxicated by the view.

Similar to the Stelvio Pass, countless hairpins scatter along the drive, but unlike the Italian variant, the Col de Turini features substantially more blind turns, making it considerably more challenging. The Turini is, however, significantly slower than the Transfăgărășan, testing the driver’s expertise and control instead of courage.

Luckily for tourists, the Col de Turini closes during the winter months, allowing them to experience a one-of-a-kind drive in safe conditions (3). It’s a bucket-list destination for driving enthusiasts.

See Also – All About the Cat and Fiddle Road