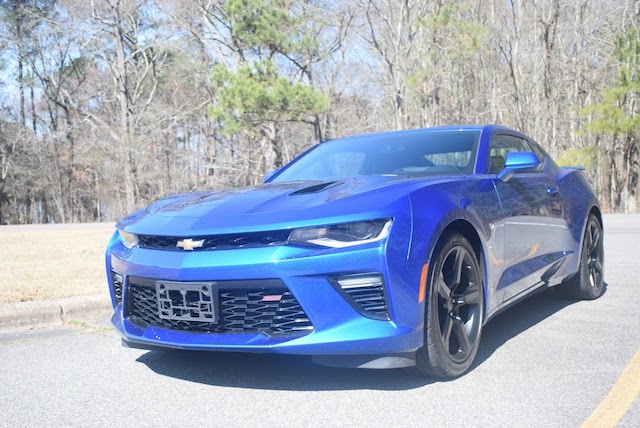 Is the Chevrolet Camaro SS a 2+2 version of the Corvette? It sure seems that way.

Both models share a 6.2-liter, V-8 engine making 455 horsepower. The Camaro has an output of 455 foot-pounds of torque; the Corvette shoots out 460 foot-pounds. In the Camaro you get a 6-speed manual transmission, while the Corvette has an additional shift point.

From there, the differences become more apparent as the Camaro is at least 300 pounds heavier, a foot longer and sits five inches higher than Chevrolet’s sports car. The styling separation is apparent as well, but if you were to drive both models back to back, you’d quickly note the performance levels are nearly the same.

Six years after resurrecting the Camaro following an eight-year hiatus, an all-new model has taken center stage. The latest iteration shares nothing with the previous generation, except for the badging. The 2016 Camaro is based on the same platform underpinning the Cadillac ATS and comes in approximately 200 pounds lighter and four inches shorter overall than the 2015 Camaro.

These changes add up to one thing: a truly fast sports coupe or muscle car delivering a blistering 0-to-60 mph time of just four seconds. Take that, Ford Mustang GT!

Redoing the Camaro has come as fuel prices have fallen below $2 per gallon nearly everywhere, except in the usual overpriced areas, such as California. That being said, the Camaro was designed with higher fuel prices in mind and that’s why a 2.0-liter, turbocharged four-cylinder engine is now available, delivering 31 mpg on the highway. A 3.6-liter, V-6 is standard and now makes 335 horsepower.

A ceramic white interior accent package ($500) was offered, providing a beautiful contrast to the Hyper Blue Metallic patina gracing the coupe’s brawny frame. Further, other interior color patterns are available, depending on the exterior color chosen.

Magnetic ride control ($1,695) and a dual-mode performance exhaust system ($895) were also present. Inside, an upgraded Chevrolet MyLink telematics system with navigation ($495) and low gloss black 5-spoke 20-inch aluminum wheels ($200) rounded out the main upgrades. Chevrolet even added $15 for the front license plate bracket, bolted to the grille and unfortunately evident in some of the photos you’ll see herein.

From stem to stern, the 2016 Camaro exudes boldness. The front fascia has a look that is almost sinister, sporting a coming-at-you smirk designed to evoke dread in all who dare stand in its way. From the front corners across the lower profile and pushing back to the rear corners, distinctive body sculpting emphasizes the coupe’s sinuous silhouette. Rolling character lines, powerful shoulders, a distinctive rear haunch, and four quad exhaust pipes are among the other exceptional features of note.

Inside, the Camaro SS offers room for four, but in reality only two will fit comfortably inside. The rear seat is mostly useless unless you and the front passenger are short and giving up legroom to accommodate the rear passengers doesn’t present a problem. Otherwise, the rear seat is best served as a supplemental storage compartment. In any event, the entire rear seat back folds down to provide access to the trunk. And you’ll savor that extra room because the trunk measures a mere 9.1 cubic feet.

The front seats are comfortable and supportive as expected. Average bolstering means you won’t feel so honed in that you can’t maneuver. Likewise, you’ll have sufficient support as you navigate the twisties or take on your other on-road theatrics.

Kudos to Chevrolet’s designers for keeping the rest of the interior uncomplicated. Both doors have the smallest of pockets with no room for holding drinks. The two cup holders between the seats are all you need.

The dashboard offers a straightforward layout with a double-notched instrument panel shield present. Two big analog displays — tachometer and speedometer — dominate the panel, but the center digital driver information display is large too. That panel is controlled by the usual steering wheel face controls.

Speaking of the steering wheel, it comes leather wrapped, stitched and perforated. Fairly tame wheel grips are present. In addition, a flat-bottomed design and SS badging are two of its other features of note.

If you hate clutter, then you’ll love the Camaro’s handsome center stack. That stack is dominated by a large, color display acting as the nerve center for the audio, climate control and navigation systems. Plug in your iPhone and Apple CarPlay appears on the screen — it works as promised too: I received and sent emails with it — the software allows you to correct same before sending. As with any voice-activated system, speaking clearly helps, so don’t chew and talk — it just ain’t polite or understood!

Beneath the substantial display are switches and a knob to control same. Further below that is a row of 14 switches ranging from seat heating and cooling management to climate control.

Two large circular dials are at the base of the stack and go beyond what they’re intended to do: deliver air to the cabin. Indeed, they’re an engineering feat and an artistic marvel rolled into one — scroll either dial to the left and your section of the cabin is cooled. Scroll to the right and more heat is supplied. In the center of each dial is another knob to open or close the vents. Its a nifty design, meant to conserve space.

Probably the most important feature in the cabin is the stick shifter itself. Or perhaps the shifter along with the three-pedal action taking place as you drive. The stick is joined by three nearby switches — traction control on/off, driving mode and the electronic parking brake. You’ll become intimately familiar with all three, if for nothing other than for different reasons.

Working our way back with the switches, the parking brake is a must to engage. You might forget to leave the transmission in first gear (if you’re parked facing uphill) or in reverse (if you’re parked on a downward slope). Yes, it happened to me — the Camaro rolled when I thought the stick was engaged. Fortunately, I was still behind the wheel and took corrective action.

The mode switch is where the fun begins — it is automatically set for touring, but you can also choose sport, track and a snow/ice mode. I used all four, including the last one for driving on a thinly graveled road. But the fun is everywhere else, especially in track mode as you feel the steering play tightening, sense the suspension system pulling in and enjoy quicker flicks of the transmission through the gears. The exhaust note resets to a deeper baritone too. In any mode, turn off stability control as you see fit.

Just one more note about the interior: leather is nearly everywhere — on the seats, across the dashboard, surrounding the steering wheel and covering the door inlays. When natural light eases, the interior bedazzles as outline lights surrounding the color display as well as the door inlays switch on. You can control the color choices by way of the touchscreen to employ a riot of reds, oranges, blues and whites to correspond with your drive mode.

Performance: The Be All and the End All

Everything about the Camaro SS boils down to one thing: performance. This is where Chevrolet’s sports coupe nearly matches the brand’s sports car in performance. The only separation is five extra foot-pounds of torque in the Corvette Stingray and a few hundred additional pounds of body weight in the Camaro. Other than that, Chevrolet designed the Camaro to go from 0-to-60 mph in an even four seconds with the automatic transmission or just a fraction off the pace of the Corvette Stingray. Such a closeness in numbers might rile Corvette faithful, but it also allows the Camaro SS to vanquish its chief nemesis, the Ford Mustang GT.

If the new and lighter frame underpinning the Camaro SS doesn’t convince you of its virtue, then the hulking V-8 should sew up the deal. Enthusiasts will want the 6-speed gearbox, what comes with a limited slip differential and active rev matching for downshifts. No doubt the 8-speed automatic will be preferred by some if only for the slight speed edge. Then again, if you’re an older driver and have tired of shifting or most of your driving is in the city, then eschewing the manual becomes more appealing. In any case, you’ll have paddle shifters to fall back on whenever a more engaged driving experience is desired.

Stomp the gas pedal and your Camaro SS is gone. If you’re especially quick at shifting you’ll see 60 mph before you know it. Let’s just say I was still in third gear when I hit that all-important performance threshold with fourth gear readied for engagement. No worries about redlining — just keep shifting as fast as you can. You might also reset the instrument panel’s display before you get started to show you the g forces at work. Clutch play is clean, although I would give a slight edge to the Mustang GT in that category.

As important as the powertrain is, the SS shines in the handling department. Muscle cars of yore provided excellent off-the-mark acceleration and confident braking, but came up far short in handling. The Camaro eliminates those deficiencies as it borrows some parts from Cadillac, including the CTS’ steering as well as GM’s famed magnetic ride control adaptive dampers, the first time we’ve seen the latter on the SS. Throw on the included Brembo brakes with 20-inch Goodyear Eagle tires and you’re ready for the track.

Regardless of drive mode, steering is brawny, but especially so in track mode. At the same time, a quick flick of the wheel to either side moves the front wheels, imbuing driver confidence as you slice through the turns. Steering and handling is on par with anything coming out of Europe —- I put the 2016 Camaro just ahead of the Mustang GT. In fact, this model is faster than the GT, although the Shelby GT350 and Dodge Challenger SRT Hellcat are faster yet. And much more expensive too.

I would be remiss if I left out one important factoid regarding the interior that has a substantial impact on the driving experience: the sight lines up front are excellent, but are awful on the sides. The smallest rear coupe windows are present, so you’ll need to lean heavily on the side mirrors to be aware of your surroundings. For some motorists driver assist features, including side blind zone alert, are a must. You’ll find it included with the top-end 2SS trim package.

In summation, the current iteration of the Camaro does everything to uphold what enthusiasts want in a modern sports coupe. It also goes well beyond that by delivering a stylish, competent and thrilling model that takes no prisoners. Moreover, GM has invested heavily in advancing the Chevrolet brand in recent years and the all-new Camaro is one of its shining achievements.