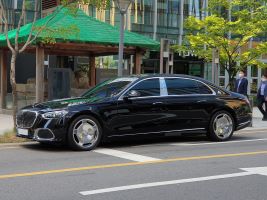 Daimler AG, the parent company of Mercedes-Benz, has a new name. As of February 1, 2022, the company is formally called Mercedes-Benz AG. The moniker represents Daimler’s passenger vehicle operation only, following the spinoff of the company’s truck and bus division that’s officially known as Daimler Truck AG.

The traditional name of the standard and volume passenger vehicles represents the marque. Models such as the C-Class, GLS, and S-Class sit underneath this umbrella. At present, they represent the lion’s share of “Mercedes” sales and will likely remain that way for years to come.

Think “performance” and AMG comes to mind. AMG stands for Aufrecht Melcher Großaspach. The first two words represent the last names of Mercedes’ founders. The third word is the name of the German city where Aufrecht was born. Performance models always substitute the Benz handle for AMG, thus the designation. The Mercedes-AMG portfolio comprises several models, including the Mercedes-AMG GT 4-Door Coupe, Mercedes-AMG GT, and the Mercedes-AMG SL.

Maybach has seen its fortune rise and fall since its inception early in the millennium. The ultimate in Mercedes luxury disappeared for several years, then was brought back as an extension of the Mercedes name. Then as before, Maybach represents the most exclusive models this manufacturer has to offer. This time, though, instead of offering unique models, each Maybach is a high-end derivative of a standard model. You’ll find the name affixed to the two top vehicles with such names as the Mercedes-Maybach GLS SUV and the Mercedes-Maybach S-Class.

If you want to understand the direction Mercedes-Benz is moving, look no further than the EQ sub-brand. This marque represents the company’s pure or full electrification pivot and may eventually denote the entire company. Therefore, we wonder if Benz, Maybach, and AMG, will eventually disappear? No matter, EQ currently represents just one model, the Mercedes-EQS with many more on the way. What does EQ stand for? “Electric Intelligence” is the name, even if you may wonder how “Q” was fitted in. We do not.

With a new name, this one represents the fourth iteration of the company’s legal moniker.

In 1926, when the company was founded, it was known as Daimler-Benz. But you must go back to the nineteenth century when two earlier companies were formed. In 1883, Benz & Cie launched, a company founded by Karl Friedrich Benz. In 1890, Daimler Motoren Gesellschaft was established by Gottlieb Daimler and Wilhelm Maybach. The two companies operated separately until they were merged in 1926. The Daimler-Benz name remained until 1998.

In 1998, Daimler-Benz made its most significant change when it merged with the Chrysler Group. The combined entity was known as DaimlerChrysler and was initially touted as a “merger of equals.” But that did not quite happen as the Chrysler side of the house felt that Daimler called all the shots. It was a rocky relationship early on, one that did not survive a decade.

With Chrysler sold to an equity fund in 2007, the remaining company was simply rebranded as Daimler AG. As before, Mercedes-Benz played a top role in the company as it does until today. But dropping the Daimler name is a huge deal, although it now lives on in a separate entity, Daimler Trucks AG.

With Mercedes-Benz AG now the de facto name of the automaker, the company maintains its ownership or stake in several other entities. These include SMART Automobiles, motorcycle manufacturer MV Agusta, and several Chinese manufacturers. Its previous truck and bus subsidiaries now operate under the auspices of Daimler Truck AG.

Bloomberg – Are you a robot? (n.d.). Retrieved January 31, 2022, from www.bloomberg.com website: https://www.bloomberg.com/news/articles/2021-12-10/daimler-truck-spinoff-from-mercedes-heralds-hope-for-value-gains