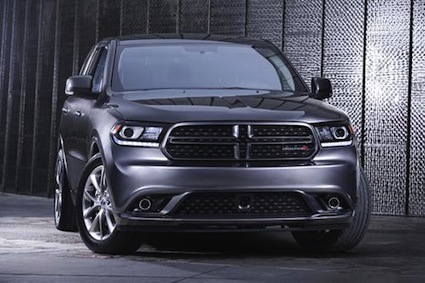 A number of traditional body-on-frame sport utility vehicles have made the transition to a unibody chassis including the Ford Explorer and more recently the Nissan Pathfinder. Although off-roading capabilities are typically limited, these crossover SUVs are more rigid, quieter and provide improved fuel efficiency versus truck-based SUVs.

The Dodge Durango is another model that made the switch, a seven-passenger vehicle that shares its platform with the Jeep Grand Cherokee. Introduced in 2011, the third-generation Dodge Durango receives a mid product cycle update, including a standard eight-speed automatic transmission and new LED technology. The updated model arrives in Dodge showrooms this fall.

The new transmission enables the 2014 Dodge Durango to achieve a 9 percent gain in fuel efficiency when its Eco Mode is selected. Fuel cut off technology shuts down half of the cylinders in the V-8 engine when operating at highway speeds. Towing capacities remain the same with the V-6 rated to pull up to 6,200 pounds and the V-8 up to 7,400 pounds. Those ratings are uniform across rear- and all-wheel-drive configurations.

Inside, Dodge introduces a new programmable instrument cluster, a pair of touchscreens, a three-spoke steering wheel with paddles shifters and an available high-definition dual-screen Blu-Ray entertainment system. Choose the Dodge Durango Limited and leathering seating is standard as is heated seating, a heated steering wheel and an 8.4-inch UConnect touchscreen.

Durango buyers can also dispense with the second row bench seat and opt for a pair of captain’s chairs. One seating position is lost, but gains in seating comfort and cabin maneuverability are achieved.

Besides the Ford Explorer, Nissan Pathfinder and the in-house Jeep Grand Cherokee, the Durango competes against the Honda Pilot, GMC Acadia, Chevrolet Traverse, Toyota Highlander and the Buick Enclave. The Honda Pilot is equipped with a five-speed automatic transmission, while the remaining competitors have six-speed transmissions. Thus, the new transmission arrangement gives Dodge a significant advantage, something that the Chrysler Group expects to translate into more sales.

Pricing is expected to be announced closer to the Durango’s release date.