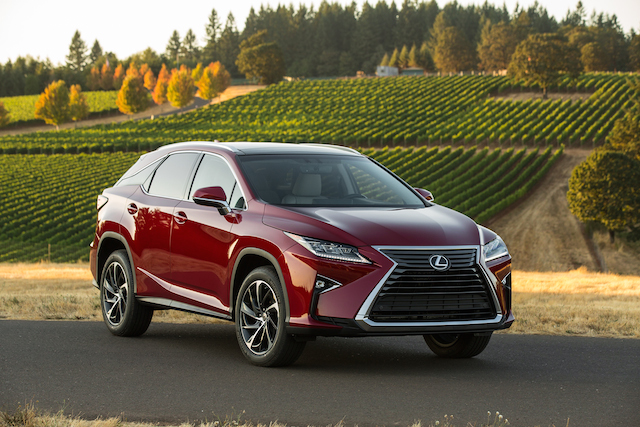 Lexus has introduced to the world an all-new RX series, the latest rendition of its popular two-row, midsize SUV. The new model, available in gasoline and gasoline-electric hybrid configurations, follows other Lexus vehicles by adopting a more masculine visage. Its all part of a plan to demonstrate a more assertive side to Lexus, a brand that battles BMW and Mercedes-Benz for US luxury preeminence.

I had the opportunity to drive the 2016 Lexus RX series at a media event earlier this month. The event, held in my town, allowed me to operate the RX on roads entirely familiar to me. That fact proved beneficial as I was less concerned about the route and better positioned to concentrate on the vehicle at hand.

The Lexus RX series was introduced in 1999. Essentially, Lexus created a segment of small, luxury crossover utility vehicles, one that its competitors had yet to exploit. The first-generation RX 300 (powered by a 3.0-liter, V-6 engine) ran from 1999-2003. It was the smallest of the lot and is about equal in size to the current Lexus NX.

Along the way, Lexus rolled out an RX Hybrid model, dubbed the Lexus RX 400h in 2006. It is powered by a 3.3-liter, V-6 engine and comes paired with a continuously variable automatic transmission, a pair of electric motors, and a nickel-metal hydride battery pack. In 2010 the RX 450h debuted (no 2009 model was built) and it maintained its same drivetrain layout, except it gained the 3.5-liter, V-6 engine.

The third-generation RX 350 was produced from 2010 to 2015. It maintained much of the footprint of the previous model. In 2013, the RX 350 F Sport was released, a sporty all-wheel-drive only model with fancy trim, an 8-speed automatic transmission along with sporty dampers and springs.

For 2016, what gradually has become old is new again. Or, in this case, the 2013 refresh that brought forth the F Sport and the spindle (hourglass) design has adopted its most aggressive expression yet.

Indeed, the look is a polarizing one too, one that may have some of the 100,000 plus annual buyers reconsidering. At the same time, Lexus hopes that the more assertive look attracts more male buyers. After all, us guys are usually not attracted to crossovers even if our wives ultimately influence the vehicles we purchase. I’m guessing the design change will be a wash with Lexus tilting ownership more toward the male side of the consumer paradigm.

The new RX comes in slightly longer and heavier than the outgoing model. A few extra inches between the wheels translates into more room for rear seating passengers. That’s important, but it had to be done carefully — Lexus told us that the RX fan base is open to change, but not so much that the crossover’s footprint is radically changed.

I must admit I shared photos of the 2016 edition on social media to gauge reactions. Notably, of the handful of responses, most were shocked by the changes and not necessarily so in a positive way. Lexus is taking some risk with the look as it employs a level of body sculpting not seen in this segment before.

The front fascia now features a more dominant hourglass grille surrounded by deep creases and sculpting top and bottom. The arrow-shaped LED lights return and are set within strikingly flared wraparound headlights. Deep pockets offset the lower end of the grille and contain the fog lamps. Arrow accents are present there as well. From the top of the grille and across the hood is additional sculpting — as if someone took a carving knife and ran it to the top of the hood.

Along the sides, the carving continues and is joined by multiple character lines, giving this model a busy look. For 2016, a floating roof design has been added, providing yet another sporting attribute. At the rear, stylish oversized combination lamps dominate, but look closely and you’ll also see the spindle outline running from the liftgate down to the base of the bumper. At the base of the bumper is a diffuser-like design with a pair of exhaust ports present.

Inside, the drama continues. Besides the larger cabin — what Lexus claims provides a rear room compartment rivaling its large LS sedan in openness — the big changes include the various ornamental trims available: walnut, bamboo, mocha or sapele wood, along with aluminum accents. The dashboard has its own share of curves and levels, bringing the exterior look inside.

The rearranged center console is more driver-oriented, with switch (lever) usability a big factor in the new design. Cup holder and storage accessibility have also been improved. Also of note, the available heads-up display has been moved to the instrument panel in a bid to aid in driver concentration. Each of these changes was accomplished by keeping driver distractibility in mind.

When it comes to powertrain changes, Lexus typically opts for the evolutionary, rather than the revolutionary. A 3.5-liter, V-6 engine is present, but it is the next generation of an engine found in other Lexus models as well as in the Toyota Tacoma.

One of the more significant changes may seem like a bit of an oddity too. For 2016, a Lexus 450h F Sport edition debuts, bringing many of the badging and design changes found in the RX 350 F Sport to this model line. It seems like an odd combination and with hybrid sales in the tank, you may wonder if Lexus is attempting to garner a few extra sales. That seems likely, although such a model with paddle shifters at the ready also seems a bit silly too.

As for the drive, the RX 350 performs as expected — its look screams sportiness, but you’re still driving a crossover SUV. Off the mark acceleration is admirable and this vehicle has no problem passing on the highway. Take it on twisty roads and you’ll encounter a certain amount of body roll — all-wheel drive and especially the F Sport do a much better job of mitigating the problem. Choose the available Sport S+ mode and you’ll enjoy the ultimate in performance and handling this model offers. No, this isn’t a Range Rover or a Porsche competitor — it doesn’t try to be. What it does do is inject at least a modicum of feedback that might convince a few fence straddlers to make the jump over the “let’s buy it” side of the rail.

As before, the Lexus RX is available in standard and F Sport trim levels. You’ll pay anywhere from about $42,000 on up for the gasoline model and about $10,000 more for the hybrid, a cost premium that only eco-serious buyers might consider.

Otherwise, stick with the standard model, choose all-wheel drive, and if trim embellishments and handling improvements are your things, then only the F Sport can help assuage that yearning.