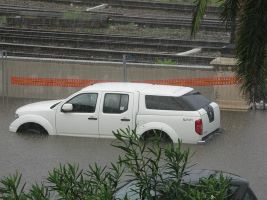 A flood-damaged car may be a total loss.

Today marks the official start of hurricane season, six months when such storms are most likely to occur. The season also serves as a warning to millions of Americans to remain alert and get prepared.

But it doesn’t take hurricane season to damage property, including your car. Tornadoes, downpours, floods, and other extreme weather events happen throughout the year. Indeed, it doesn’t take much for floodwaters to rise and submerge your vehicle, rendering it unfit for use.

The extent of that damage isn’t always known until you perform a hands-on inspection. Here’s what you need to do (and not do) as you inspect your flood-damaged car.

1. Take caution before you begin your inspection.

Is your car still sitting in the floodwater? Be extra careful here — debris, including metal, glass, sewage, or chemicals, may be present. Unless you have the proper gear, including wading boots, it would be better to wait for the water to recede.

Submerged vehicles likely have water in the engine, so don’t start the car. At least not immediately. Contact a tow operator to have your vehicle pulled to higher ground. Key fluids, including engine oil, transmission fluid, coolant/antifreeze, and brake fluid may need replacement before moving your vehicle.

3. Inspect under the hood.

Some of the worst damage done to a submerged vehicle is under the hood. Water and debris will find its way into every nook and crevice, including inside the engine, the transmission, or other key components. Check your motor oil as you always do, by removing the dipstick. If you discover water droplets, then the engine cylinders sustained damage.

You can’t see inside the fuel tank, but you can determine whether water invaded the interior by siphoning fuel into an empty gas can and looking for water, which doesn’t mix with fuel, by the way. If water is present, remove all fuel, dispose of it properly, then refill.

Then attempt to start your car. If it starts, drive it for several hundred miles, then change the engine oil and transmission fluid again.

If your car doesn’t start, there may be damage to the electrical components. Corroded battery cables, burned-out fuses, a malfunctioning alternator or voltage regulator, and a broken serpentine belt are some things to look for. In addition to wiring, all belts and hoses may need replacement. Sensors and your car’s central processing unit (CPU) may have also sustained damage.

7. Attend to the interior.

Unfortunately, flood damage most likely isn’t limited to under the hood or to the gas tank. The interior may have filled with water, potentially ruining your audio system, soiling the carpeting, wrecking your upholstery, and infiltrating other areas. Remove carpeting, seats, and cushions, then use a garage vacuum to sop up the water. Fans and dehumidifiers can hasten the drying process.

When Should I Notify My Insurer?

Depending on how much damage your car sustained, filing a claim with your auto insurer may be the most sensible approach. If you have comprehensive coverage, your claim may cover the cost of replacing your vehicle, minus a deductible. You should know that this information is a matter of public record, and it can appear on your vehicle’s history report.

If the insurance company determines the cost to fix the damage to your car (minus your deductible) is more than what the vehicle is worth (and what it can fetch by selling it to the salvage yard), they’ll consider it a total loss and you’ll receive a check. The insurer then must report the totaled vehicle to the appropriate state department.

In some states, you’re allowed to buy back your totaled car, but it will also carry a “flood” or “salvage” title, indicating that it sustained major damage.

Image by David Mark from Pixabay