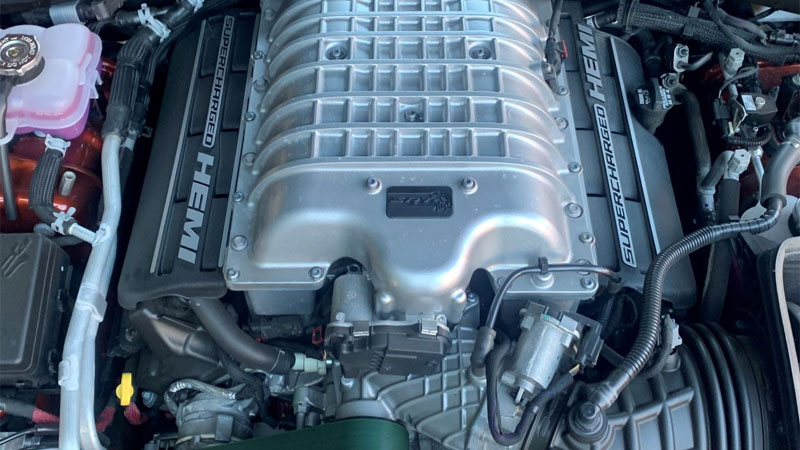 Most people with even the slightest interest in cars know how a regular car engine works, the most basic of principles being: air mixed with fuel makes power. Hence, mixing them must yield a specific ratio. Indeed, the ideal chemical ratio is 14.7 parts of air to 1 part of fuel.

As such, you can’t just make your poor car guzzle gallons of gas, because it won’t have enough air to burn the fuel. How do we add more air? Specifically, by adding forced induction – at least most of the time anyway. Forced Induction comes in two ways: by supercharging the engine or through turbocharging the engine. In a few cases, both.

A supercharger is a small fan that is spun by the engine’s crankshaft via a belt, whichever belt it may be. Think of how a normal fan works: it creates a lack of pressure behind it and that makes the air in front of it increase in pressure, as such, air flows. A supercharger works exactly like a fan: it creates a smaller area of pressure at the intake to provide a greater pressure inside the engine. As a result, more air comes into the engine.

The supercharger can also compress the air. By making the available space for air to “live in” smaller, the pressure goes up. Importantly, the overall room of the engine is the same and won’t change, but if the air particles are forced together due to a higher pressure, more air gets in.

The downside of a supercharger is that it requires engine power to make power. Because of this, they aren’t especially efficient. Ideally, power would be added by using something that we’re discarding, or from something more efficient than the engine. Furthermore, the engine isn’t insanely efficient — around 40-percent of the energy from fuel is spent on actual power. Nevertheless, the upside of a supercharger is that it spins in tandem with the engine. This means the airflow is constant. As such, superchargers have very good throttle response.

There are three types of superchargers: Roots type, centrifugal, and twin screw.

The Roots-type works exactly like a fan, or more precisely, like a pump. For example, it takes air from the outside and pushes it in. Think of it as a fan with two, three, or four “blades”. Now replace the blades with lobes, like a gear. Take two such gears and mesh them together and make them spin. As a result, this causes air to be pushed in the engine when they spin, and they push in quite a bit of volume. Roots-type superchargers were common in Europe, with cars from Mercedes, Mini Cooper, and Jaguar boasting them. The Corvette ZR1 also has a Roots-type supercharger, along with many others.

The centrifugal supercharger is in effect the turbocharger’s compressor component, but instead of being linked to a turbine to get its power, it’s linked to the engine. When you think of a classical “turbo” in terms of looks, you also think of a centrifugal supercharger. I’ll go more in-depth on its principle of use when we’re talking about turbochargers. An iconic car that had such a supercharger was the 1967 Shelby GT 350, along with most Koenigsegg of age.

A twin-screw supercharger looks exactly as you think: two large screws mesh together and push air in. By meshing them together they also compress the air that comes in, all while making a small pressure difference, similar to the Roots-type. Consequently, the main advantage over the Roots is that a twin-screw system is more efficient. An iconic but relatively unknown car that has such a supercharger is the Terminator Cobra SVT.

A turbocharger uses the exhaust gases to pump extra air into the engine. They were developed in the early 1900s with radial engines in mind. The first time a turbocharger was mounted on a truck was in 1925. It then became commercialized in the 1930s with trucks.

GM had cars with turbochargers in the early 60s because they weren’t able to make a turbocharger small enough to fit a car sooner.

A turbocharger’s working principle is relatively simple. For instance, you have two main components, a turbine (hence, turbo) and a compressor (hence, charger). The turbine is spun by the car’s exhaust gases when they leave the cylinder. Seeing how they leave the ignition chamber at high pressure and speed; they have decent enough kinetic energy to push the turbine’s propeller. The turbine’s propeller is linked via a shaft to the compressor’s propeller.

The compressor works as a centrifugal supercharger, but instead of using the engine’s power to spin, it uses the power made by the turbine to spin. As such, it can suck more air into the engine with a higher pressure. However, there is a big downside of turbos in that they rely heavily on what the engine is doing. A high boost is achieved at the high turbine and compressor RPM, pushing up and over 100,000s. Notably, an engine that runs at 1000 rpm doesn’t create any boost, and by the time it gets to 3000 rpm, the compressor barely compresses any air. Consequently, we have a phenomenon called “turbo-lag.”

The smaller and lighter the turbine is, the easier it will be for it to start spinning sooner, with the caveat that less air is being pushed in. Most cars have turbochargers these days, from the Honda Civic Type R to smaller crossovers like the Buick Encore GX.

There’s also the twin-scroll turbocharger, which is a simple turbocharger that has only 2/3/4 transport pipes, compared to 4/6/8 transport pipes on a regular turbocharger. Two cylinders share a transport pipe based on the firing order, which causes the pressure to pulse instead of being constant. A car with such an engine is the Mitsubishi Lancer Evolution X.

As the name suggests, there are two turbos linked in parallel. Usually, there’s one on each bank of cylinders (hence used mainly in V-type engines). This solution was chosen due to how much turbo-lag there would’ve been if there was only a single very large turbine. The BMW F90 M5 has such a layout.

This configuration is slightly different. There are two turbos with two different jobs. One is for lower engine RPMs, as such lighter and smaller to get the engine going, and one bigger capable of bigger boost, used for higher RPMs when the engine is already up to speed. This eliminates most of the turbo-lag. These turbos aren’t used at the same time, the small one first followed by the bigger one. The MK4 Toyota Supra had such a turbo layout on the 2JZ-GTE.

This layout is based on one turbo’s output that’s fed into another turbo’s input, as such reaching high pressures and high levels of boost. They aren’t used on cars, due to a large amount of turbo lag.

Three-way turbos or Quad-Turbos- A combination of the already existing configurations. Think of the Veyron with its W16 engine (one turbocharger for each bank of cylinders).

Finally, there are twin chargers to consider and they operate as you might expect them to work. For instance, a supercharger operates at low RPMs, while a turbocharger at higher RPMs. This layout is very similar to the sequential Twin Turbo, with the added benefit that turbo-lag is eliminated almost completely.

Parallel twin chargers aren’t widely utilized, due to the difference in output pressure between the two, along with how complicated it would be to use them in parallel. They became something back when Lancia was running in the group B rally with the Lancia Delta S4, back in 1985. A contemporary car that uses twin chargers is the Volvo XC90, or Volkswagen’s 1.4 TSI on the Golf 5 if we’re talking engines.